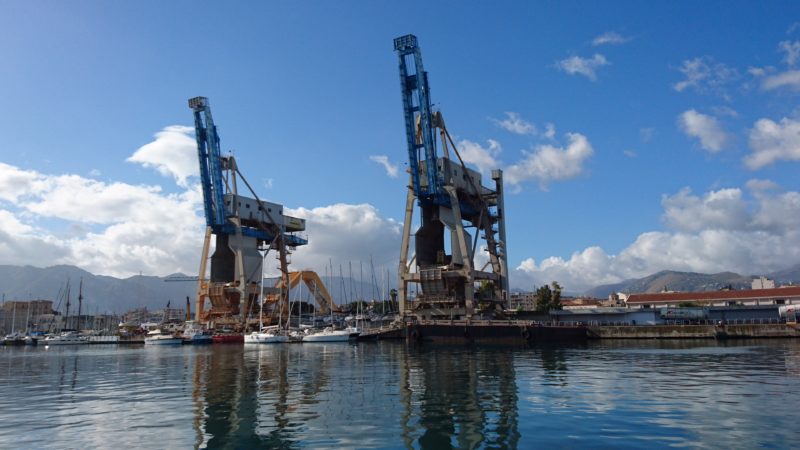 We were safely holed up for the front coming from the west and set about making repairs. It was becoming apparent that Phoenix Charters weren’t particularly diligent about maintenance of Pantelisa. During the storm and heavy seas, water was finding its way through the closed hatch vents, soaking the forward berths and water was pouring through a ceiling panel near the foot of the mast. The compass lights weren’t working, The Steaming light and Deck light weren’t working, the bilge pump wasn’t working… and the list was slowly growing the more we were getting to know the boat. 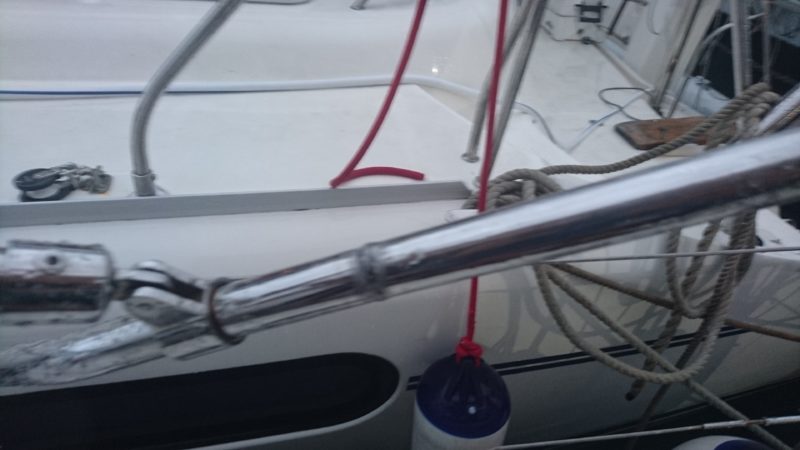 The three days in Palermo were pretty concentrated on arranging or performing repairs and my blogging had taken a back seat. We stripped down the Bimini and took its cracked frame to be welded. The sailmaker did an excellent job of replacing a section of sail and fitted new slug slides, that hold the sail to the mast since these were pretty worn and brittle and a few had broken during the storm. The sailmaker suggested that the broken slug slide next to Thomas’s repair contributed to the torn sail as it would have offered a gap for the wind to take a hold and the resultant bulge at the would have ripped the sail from forward to back. 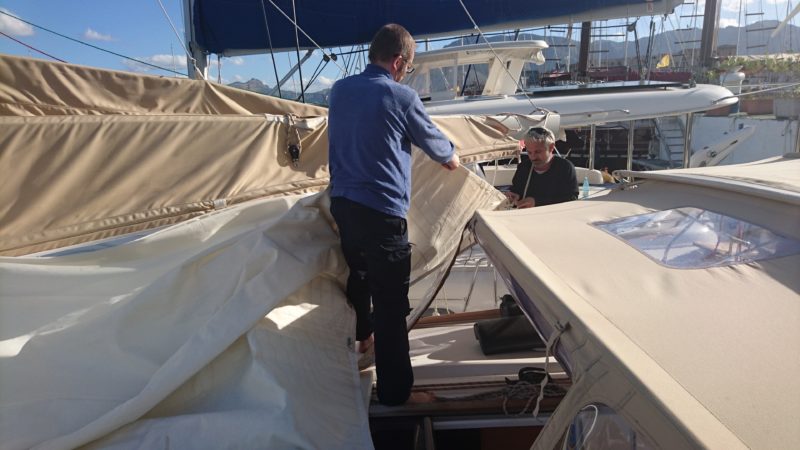 Thomas was a real asset here, as not being able to speak the language makes things 5 times as difficult, as I found in Catania. Not only that, Thomas has an eye for detail and a proactive attitude that gets things done, caring for Pantelisa as much as his own boat.

We were up early to leave Palermo. Half a mile out we noticed the wind direction and speed indicator wasn’t working. An impromptu meeting: should we return to the Marina to repair the indicator or continue to Sardinia? We could miss the weather 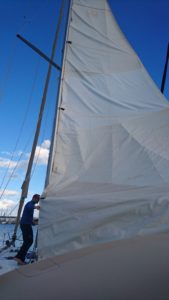 window if we returned so we decided to continue; we could reef (reduce sail) and go cautiously at night.

That night we hit another lightning storm although I miraculously slept through this one, as we were slamming into waves in the centre of a thunderstorm with my head inches from the impact zone of hull on wave. Apparently, the lightning was all around and more frequent than the previous one. Julien said you could read a book by it, although I’d guess he probably wasn’t.

It was two nights voyage to San Pietro, a small island on the west coast of Sardinia

The next day was fairly straightforward, we had a dry day with a bright and breezy northerly wind that kept us sailing along. Nothing really to see or report 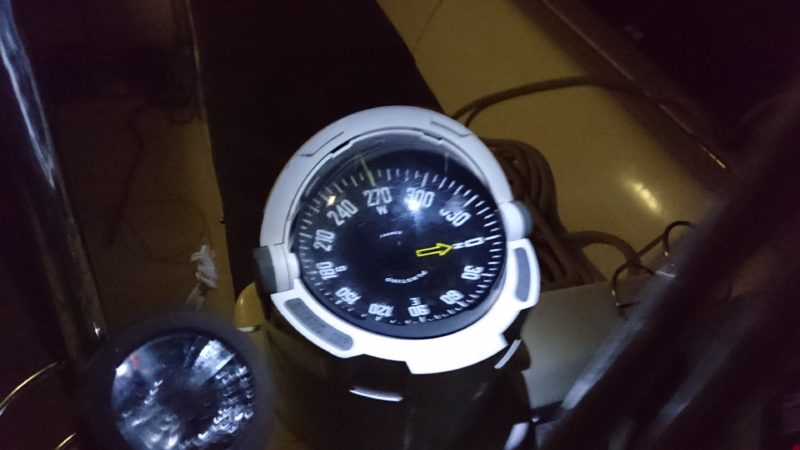 When I came on watch at midnight, we were already off the south coast of Sardinia with one ship to the north-east on an intercept course with our track. We were in the lee of Sardinia and motoring along a flat sea at a leisurely four and a half knots with the main task of keeping an eye on the approaching ship, I watched the giant cargo ship quietly pass at a half a mile off our starboard beam and steadily speed ahead of us. I didn’t have to change course or speed.

Being so close to the coast means that I could get internet so could catch up on messages. We were well ahead of schedule for early morning at San Pietro so increasing speed would be pointless. For the next couple of hours and in the absence of waves, I’d surf the internet for 5 minutes then check the AIS and scan the horizon.

We were due to change course at Capo Teulada to a northwesterly track toward Capo Sperone. Simultaneously we were out of the lee and the northerly wind heeled Pantelisa over five degrees. Without the wind indicator, it was hard to tell if it were enough wind to sail but sticking my head outside the bimini, it certainly felt like it.

Up until now, watches were just a case of holding one course and looking out for ships and problems. This was the first time I’d been on watch alone for a change of course so I steered the new heading and saw the wind was still at a favourable angle for sailing, if a bit close, and unfurled the genoa to the second reef. Easing back to tick over, the speed maintained at 5.5 knots and I cut the engine.

This change was enough to bring the skipper out for a double check which is as reassuring for me as much as him. It was deemed to be a good decision and Thomas retreated to his cabin and I enjoyed a good sail for a couple of hours without motor, the only concern on this new bearing was Isola Del Toro, a large rock hosting a lighthouse which was in our leeway (the path we drift due to the sideways push of the wind). Ideally, we should turn a new heading before then and, in the absence of boat traffic, the light on the rock was the only thing to look out for.

I was due to call Julien at four for his watch but I didn’t want to miss the new course change and stayed on for an extra half hour. The wind increased at the point I was thinking of turning which brought out both Julian and the skipper so we started the motor and changed course into the wind furling the genoa as a full crew.

I’d had a taste of single handing and it was sweet. It’s different to following orders as it involves an expanded awareness and often there is more than one choice for a given situation. 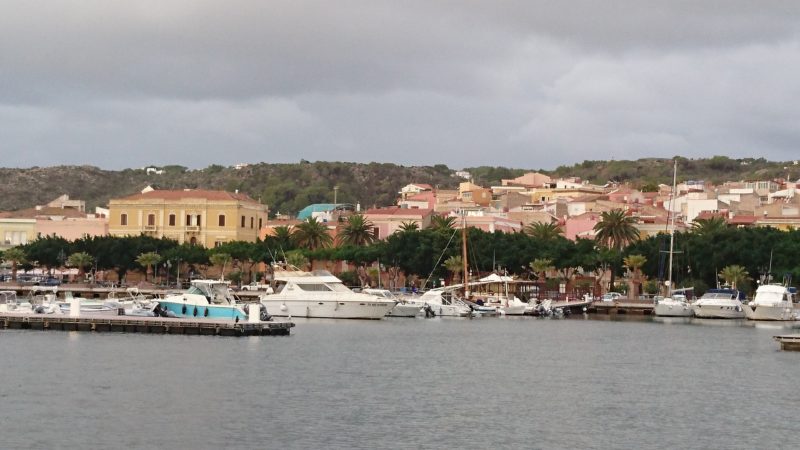 Under motor, head to the wind, Pantelisa was now banging northward through the waves but I was so tired I slept through it anyway, despite my cabin dropping over each crest into the concrete troughs below. My cabin had not dried out from the night before and was still leaking so I blissfully slept in my clothes under damp blankets.

I awoke to activity on the deck and grey light filtering through the hatch, and I arose just as Thomas came to announce we were nearly at Isola di San Pietro. With a groggy head, even tying a clove hitch was a challenge but we prepared the fenders and docked neatly in Carloforte shortly before 9am Saturday 11th November. 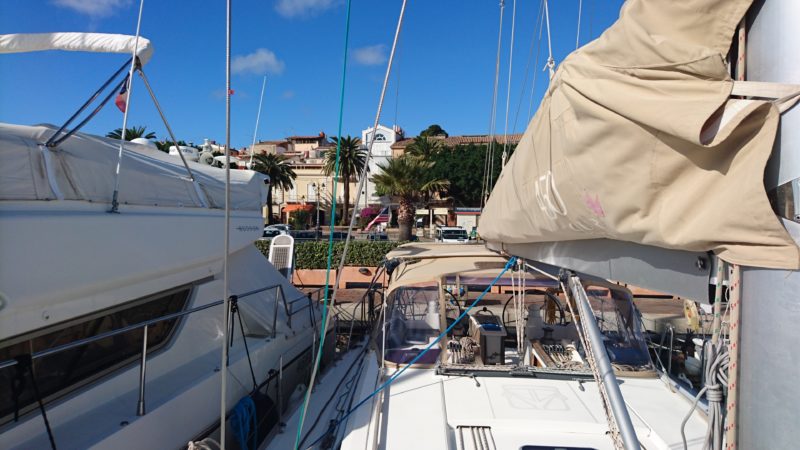 We were sheltering from another approaching front. Forty-knot winds from the west: the direction we wanted to go. So far, we were mooring more than we were sailing and the forecast looked like it was putting us here in Carloforte for at least five days…