Notes From A Small Island 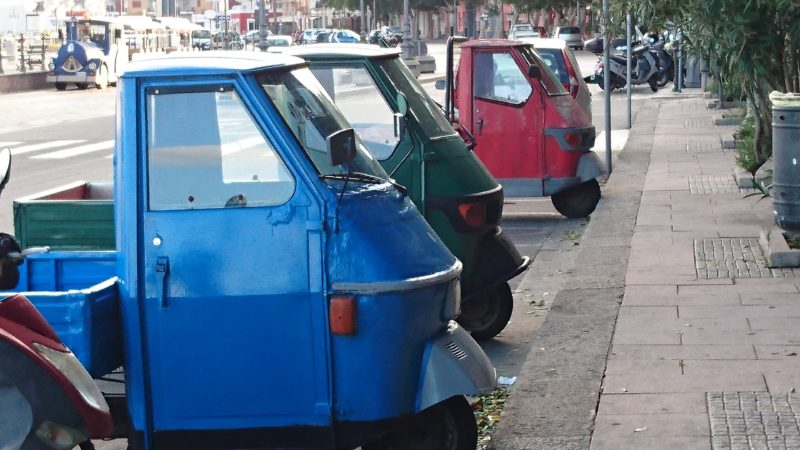 A Bill Brysonesque title, I would agree. Smaller island, fewer notes so no real comparison.

Carloforte! A beautiful town of narrow cobbled streets of quaint Ligurian architecture with a relaxed and friendly atmosphere. As soon as we moored up Pantelisa, scrubbed her decks and hosed her down, Thomas led us to a local Cafe for the best cappuccino I had ever tasted. I’m not normally a coffee drinker but no-one else seems to do coffee like the Italians. It was a warming interlude in a relentless cycle of marine maintenance. 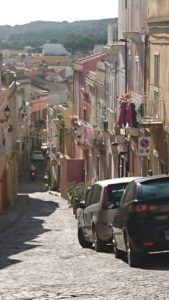 The brightening sun chased away the morning chill as we returned to the boat and set about decamping the forward berths and drying out the mattresses on the quayside in the brilliant ascending sun. Julien was, once again, hoisted up the mast. This time to replace the cable from the newly fitted deck light inside the mast to the connector between the deck and internal panel that leaked like a shower at sea.

Up on deck, the screws holding the conduit channeling the cables from the mast through the deck were loose. Replacing the screws with nuts and bolts and tightening the flange cured that leak. Next were the hatches. 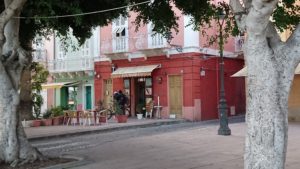 The O rings had perished on the hatch ventilators which were dripping in water along the screw through their holes. Not a lot but over the course of hours and days, enough to give anything below a good soaking. We had a big box of O rings but none the right thickness to replace the old ones. Thomas had the idea of putting an O ring inside between the hatch and the screw head instead. That worked as long as the screw wasn’t so tight as to deform the O ring. My job was to go round all the hatches adding O rings to screws, testing with the marina’s hose as I went. Seemed to do the trick. 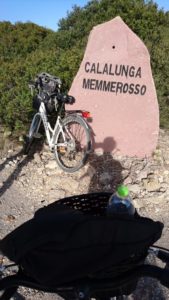 Thomas suggested a bike ride. I wanted to catch up on my blog but said yes anyway for a feeling of team bonding and camaraderie, besides, if I don’t do anything, I have nothing to write about. Julien said ‘non’ and stayed behind, he appears to be more antisocial than me, he does what he wants without apparent concern for what others might think – which is a skill I’d like to cultivate to the point of second nature without having to work at it. The urge to ‘Fit in’ has been a terrible curse in the past.

The cycle hire shop was closed but the owner responded to a quick phone call. I produced my last €20 note but it wasn’t required until we returned the bikes and so it returned to my pocket.

“Documenti?” the shop owner asked. We had none but instead accepted €100 deposit. The day was bright with a chill wind but a few minutes with pedals and heart pumping up the Sardinian hills by groves of lemon and olive trees, I soon warmed me up.

The cool northerly wind whipped up the white horses along the blue straits between Carloforte and Sardinia, while trying to push me back down the hills I was panting up. We reached the north point to experience the full force of the mistral out of France and over the sea. Foaming waves crashed on the rocks while the spindly shrubs turned their backs and bowed their heads to the south. 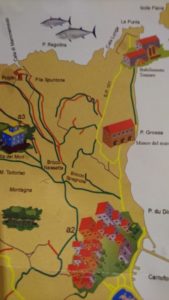 “Il Fungo” Thomas said, pointing at the map. An almost legendary giant fungus was marked close by and we set off on a quest around the narrow and undulating gravel tracks. After a while of navigating the back lanes, we gave up and resorting to Google searches revealed that the colossal mushroom had collapsed in 2010 and left no remains.

Thomas asked if I’d like to go on but after the hour or so of standing up on pedals and getting off to push the bike up the steepest slopes, I said I wanted enough energy to get back to town and we turned back. The return journey turned out to be a fast downhill descent into the town and we were back within 15 minutes. If I’d have known, I could have carried on for another hour or so… we were back early.

A grey, damp and windy day that felt more like Wales than the Med. This was why we were marooned in Carloforte, pinned down by the Mistral out of the north… I caught up on my blogs, well almost anyway. A slight interruption of returning the bikes back spoilt my flow. Checking my pockets for the €20… gone. It must have worked its way out while I was grunting my way up the hills. Gutted. It reminded me when Deb lost £50 in Bath Abbey, which seemed like a big deal at the time. Deb died three years later which put some perspective on it… and I had a thought: I get to live the years that she no longer has. Being ‘not dead’ is priceless.

I noticed the guy in the boat next door leaves his folding bikes unlocked on the quay. There appeared to be a surprising lack of crime here, something that endears me more to this island, even on this cold and blustery day. We leave the boat open without worry the whole time we are here.

The best strategy for today was to stay on the boat and sit under the blankets to keep warm: writing, remembering, editing, rewriting and re-editing. None of this writing comes easy but what better excuse to shelter from the cold wind? 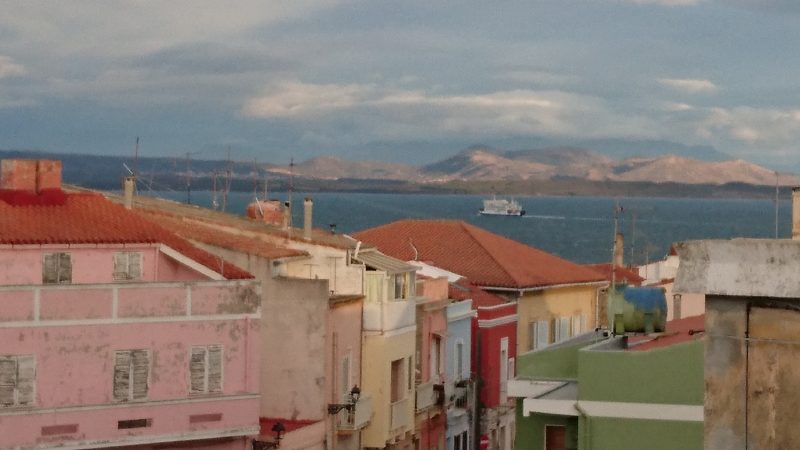 I wandered around Carloforte, still cold but dry and bright. At the top of the hill, perches the remains of the town’s fortifications, a stately looking school, and a museum. The museum was closed and didn’t advertise its opening hours. The heavy wooden doors gave the impression it wasn’t even interested in visitors. A sign outside portrayed an old fleet and mentioned Napoleon within its Italian text. I took a few photos of the view across the straits to Sardinia and turned my back on the Mistral to flip flop my way down the echoey narrow streets back to Pantelisa.

Thomas asked if I had been shopping. I had inherited this god-awful task by volunteering to look after the kitty. I said “No, I’ll do it tomorrow morning.” until it was pointed out we had nothing to eat except pasta and parmesan. Thomas offered to come along and invited Julien too. Julien said ‘Non.’ So Thomas and I went to the local supermarket to stock up on €155 worth of groceries for the forthcoming leg to Gibraltar. Dinner turned out to be pasta and parmesan, I ate with feelings of bemusement and resentment. At least the victualling was done.

I awoke at 7 to noticeably less condensation around my hatch and a bluer sky above. There would be no rain today, but the Mistral, although less powerful, still nursed a northerly chill. 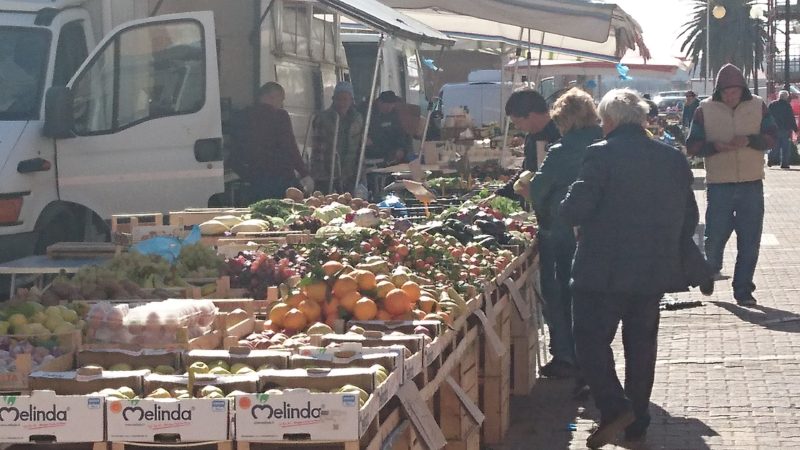 My role today was ‘Hunter Gatherer’ with a mission to find some eggs, which were sorely lacking at last night’s supermarket. At noon, I followed the narrow sunlit cobbled streets of Carloforte southward toward somewhere marked Mercato del Mercoledi on Google maps and happened upon an open-air market just before its 1pm closing. Fruit, veg and eggs were displayed aplenty. The sun perfectly aligned to the longitudinal streets warmed my back in the cool air I dawdled back to the marina. 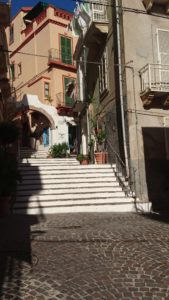 The town was unusually busy and children were thronging the streets. The pleasant, communal atmosphere reminded me of my childhood back in rural Northamptonshire that had long since eroded by the tide of time.

I discovered a cafe in the corner of the Piazza Repubblica and settled on a quaint table under the parasols on their patio in the square to order a cappuccino. A corner table of the corner cafe in the sun. Ten minutes later, the town was deserted. Apparently, 15th November is the celebration of Madonna dello Schiavo. I don’t know where everyone went but I ordered another cappuccino anyway to savour the peaceful contrast.

Returning to Pantelisa, the weather looked like a ‘go’ for tomorrow so we prepared the boat for sail before dusk. We discovered that one of our valued crew was absent for the voyage: the autopilot… which was now dead or in a coma. We convened a meeting at a bar across the road where we voted to continue to Gibraltar steering by hand – old style. It would be hard but we were all agreed: we would proceed and get it fixed in Gibraltar. 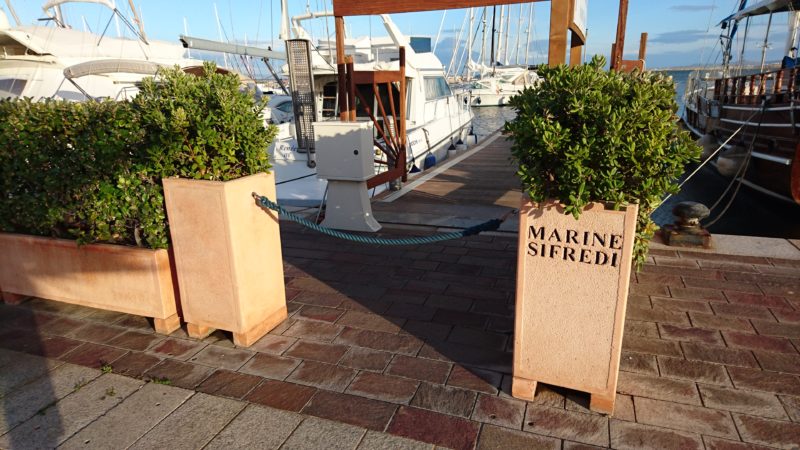 Relieved about the spirit and solidarity of the crew, We finished our beer – all the sweeter through Thomas picking up the tab.

By the time we returned, Rolf forwarded some instructions via WhatsApp for what and where to check for the autopilot. Julien located a faulty fuse that when touched with a fingertip brought the autopilot to life. Julien switched that fuse with one of the same rating on the inverter and both devices seemed happy with the exchange, and we were happy that Ray, the Raymarine autopilot, was well and awake and hoped he would still be with us tomorrow and all the way to Gibraltar.