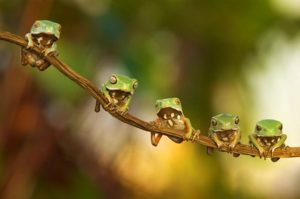 Wednesday morning dawned and I was still nursing fatigue from some sort of stomach bug and didn’t feel like getting up for yoga but I went anyway. Sam was leading this session and she turned out a real joy. Less of a workout than Rike’s session on the first morning after I arrived at the retreat. I was beginning to feel better. Just in time for the Kambo ceremony.

Legend has it that an ancient tribe in the Amazon were struck down by a mystery illness resistant to all their know medicines.

One of the shamans, Paje Kampu, embarked on a vision quest to see if he could divine the answer from the great spirit. He trekked into the jungle and cooked up some ayahuasca alone in a remote spot and drank it at sunset.

In his vision, the queen of the forest led him to an enormous tree and showed him how to call for a small bright green frog (phyllomedusa bicolor), whereupon he stared up into the branches and sang. To his surprise, a bright green frog climbed down onto his shoulder. The queen told Kampu, “This frog is the prince of the forest. He is poisonous and has no predators but, fear not, the poisons of the forest are also medicines.” And the queen showed Kampu how to work with the frog.

Kampu returned to the tribe and set about treating them with the new medicine. Not only did it cure the tribe of the mysterious disease, it served to cure snakebite, malaria and curses.

Amazon tribespeople harvest Kambo by calling the frogs using the same sacred songs and play instruments that mimic its voice. The frogs descend from the high trees where they live, allowing the shamans to suspended them on strings who release them as soon as the frog allows the secretion from glands along the side of its body to be scraped onto a stick, where it is then dried and wrapped in leaves.

This enigmatic frog has no natural predators. It is not an endangered species. Except, as usual, by the threat of destruction of its habitat by money-hungry humans.

Attempts to breed the frog in captivity by Big Pharma have failed: captive frogs do not secrete the medicine. Scientists are mystified as to why not. 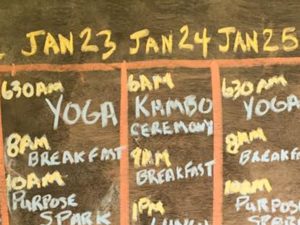 Edward, an 18-year-old from England was feeling ill and came to say he wasn’t going to do the Kambo as he felt so ill. We said “Kambo is a medicine, you’re closer to the Kambo than we are since it makes you purge anyway. He turned and his illness caused him to turn and projectile vomit into the weeds before returning to bed.”

It seemed a shame to come this far and not go through with a session so I went to the cabana to talk to him. I said “How would you feel at the end of the week and you missed the ceremony having come this close? If it were me, it would bother me and it might even heal this sickness.” He said he could always do it again another time so I said “OK, if you’re sure.” and left. Ten minutes later Edward appeared, ready for doing the Kambo.

We were split into four groups of four and five and I was in the last group along with Adam, Herbert, Edward and Tim. Michael from New Zealand was in the first group and was shouting out in distress as the Kambo was forcing his body to purge. This wasn’t helping the anticipation. Someone said it feels like we are gladiators waiting for the arena where the lions were eating the warriors. Tim was about to go to meditate when Ryan came up to say the energy felt different and that we should go into the third slot, cutting out Tim’s meditation opportunity.

We sat on our mats removing our shirts and downing two litres of water as quickly as possible as the ceremony started, the surface of the skin on the shoulder were burned away ready for the medicine to be applied. It wasn’t long before I started feeling the effects. My hands and arms began to tingle and I bent forward to the bucket ready for the purge and promptly passed out.

I was in a dream world and I felt a hand on my cheek and a distant voice say ‘breathe’ and I slowly came round well away from my bucket. I felt nauseated and began to heave into the bucket. “Never again.” came the thought. Not much was coming up and I was urged to drink more water. I couldn’t take any more. I had water in my mouth but felt unable to swallow.

The feeling was beginning to subside. Ryan said, “I’m going to burn another dot OK?” “OK I said as I prepared for a second wave.” and the tingling and purging rose within me again but I didn’t faint.

“Come on, what are you holding onto?” Ryan asked. Good question. A thought that didn’t feel my own came to me “Allow people to help, don’t do it on your own.” I looked around me and there were bodies scattered all around with Herbert facing the other way. I wanted to go to the toilet and I was helped by Rike and Luis. This was the first time I had been helped onto a toilet and executed this most private act in company. I didn’t care though. It was necessary. Back on the mat, I purged as much as I could but far less seemed to come up than went down.

I looked across at Adam who rose out of his bucket with a smile and said: “You’re a warrior, man.” Exactly the thought I had about him. His heart and soul were in it. Apparently, we all passed out apart from Herbert who was disturbed by the sight and turned round to focus on his own process. Edward was laid on his side but conscious and Tim was really going through the mill. Tim had seven dots since he’d had Kambo before. I had three.

It was a relatively long session since it was an intense group but we were soon out of it and I began to feel cleansed. The sickness that I had experienced the last few days was no longer there and on top of that, I felt happy. My shoulder was a little sore where the burns were but I felt good deep inside. Never again? Maybe one day… 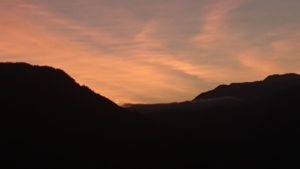