The Road to Cusco: Lima 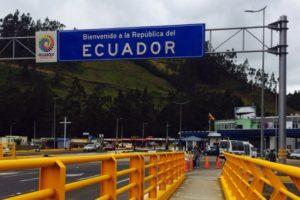 Crossing the Ecuador border was straight forward after the half hour queue. “Occupation?” “Computer Engineer,” after reading a tip that saying writer or journalist can be problematic.

Straight on a bus to Tulcan bus terminal, after some language ping-pong with the ticket clerk, the bus I wanted was for Quitumbe, the South terminal in Quito, which was due in fifteen minutes. No breakfast for me then, and I bought a bottle of water while I had the opportunity.

The bus climbed into the mountains along wide smooth dual carriageways, something that Colombia lacked. The driver sped around the sweeping bends causing me to hold tight to the seat in front.

The landscape was mountainous but more barren than Colombia. The towns appeared more prosperous and reflected some influences of the United States with its currency and KFCs. Somewhere along the way, we crossed the equator, my first ever venture into the southern hemisphere. There was no fanfare or even sign that I noticed, and technically I went quietly from spring to autumn.

The bus pulled into Quitumbe shortly after 4.30pm and the hunt for the Cusco bus began. As was becoming the way of things, there wasn’t one. As usual, I was told I had to get to the border, cross in a taxi and get another bus. A ticket to Huaquillas, wherever that was, was $15 and due to depart in 10 minutes.

After 6 hours on one bus, there were to be 12 hours on this one. There was not much to see out of the window in Quito since the city was shrouded in grey drizzly cloud. ETA was 5am.

Taxies were waiting at the stop in Huaquillas. $5, I don’t if that was too much but I took it. Tired, you see. The taxi driver produced some Peruvian currency “Soles, Soles.” Typically they give an abysmal exchange rate and I had no dollars anyway so declined his optimistic offer.

Immigration was quiet and I was through in no time. Another day, another rubber stamp on a piece of paper. The next taxi was $10 which I thought was steep but I found the rate posted on a tariff board and it turned out a 20km journey and I only just managed to scrape the change together for it. 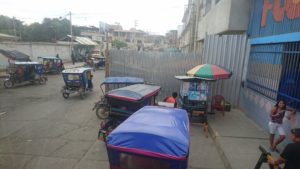 At the terminal, there was no bus to Cusco. Go to Lima and change. 90 Soles, departure at 8:30am. My visa card was rejected by the official and I walked about a mile to the ATM in the town. 6am and the Tumbes traffic was just honking its way to life. Drawing out the soles, I made my way safely back to the terminal and waited.
“Quanto Tiempo a Lima?” I ask. Twenty two hours journey time…

Tumbes seemed to be a purely commercial town like Ipiales was. I grabbed some street food for breakfast. Empanadas and a milky, porridgy drink, so nice I had another. 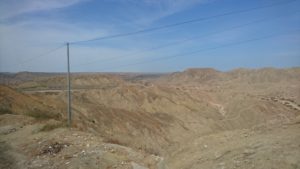 On the bus, through the Tumbes rush hour and we were soon zipping along the Panamerican highway. the land was flat and barren, reminding me of the Sinai, which led to thinking about Deb. Deb and I used to pick up cheap flights and go to her apartment in Sharm el Sheik for a month in the winters. She told me one of her dreams was to go to Machu Picchu. Cusco was the tourist springboard for that. Now she was dead there remained only memories and ‘shoulds’ and my attention resumed to the passing scenery.

The spindly bushes were adorned with discarded plastic bags that once drifted in the breeze. Scattered between were half buried plastic bottles resisting their decomposition by sun and sand. 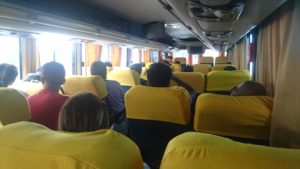 It is warmer here near sea level and this bus, unlike the others, does not engage its air conditioning. And unusually had opening windows.

In the seat in front of me, there is a pleasant Peruvian lady sharing food and drink with her son, joyfully tossing plastic bags and wrappers out of the window. Ecological consciousness is not yet universal. 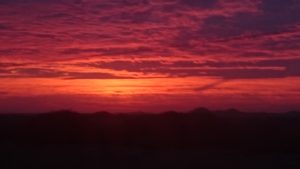 The Panamerican highway changes from dry shrubs to barren hills to flat plains and rice fields. The Pacific shore comes and goes in and out of view and the straight smooth asphalt degrades into gravel track and back again.

This is probably the oldest and most basic bus I’ve been on so far, with no power or wifi, but the journey seems less tiring without the constant sharp cornering and changes of altitude. The straighter roads make for faster speeds and there’s a real sense of making progress on the thousand kilometre journey to Lima.

People board and alight at stops along the way and I sometimes have the luxury of stretching out on a double seat. Even penned in, I still manage to sleep using a folded jacket as a pillow.

We arrive in Lima at 5am and we’re hustled bleary-eyed of the bus to claim our bags. The ticket desk officially opens at 6 but there is already someone at the ticket desk “Cusco Economico?” I ask. 5.30pm. The VIP service leaves at 1.30pm for a tenner extra. For that, I save four hours and gain a bit of luxury and perhaps some wifi. I say ‘perhaps’ as the route is the notorious Nazca route where bandits have been known to hijack buses while they are out of cell phone signal. 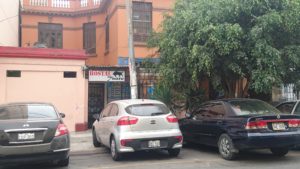 I devise a cunning plan, I notice a Hostel on the maps.me app on my phone not far from the terminal. It’s a 5 minute walk past the stadium and military barracks to an unassuming narrow entrance tucked behind a tree. I ring the bell and a short Peruvian appears rubbing his eyes and yawning. Normally, check in is not until the afternoon at these places but he shows me a double room with ensuite. Perfecto. It has a strong wifi signal as I’m right near the router. 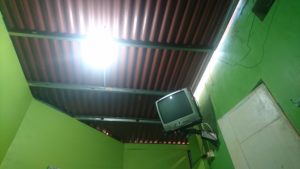 The room looks like a prison cell. Looking up at the ceiling reveals daylight around the edges. This must have been an open courtyard at one time. It doesn’t matter, it’s not raining and I have the benefit of fresh air and the full volume of background city noise of horns, car alarms and the whistles of the traffic police. My single pair of socks are beginning to smell so I give them a wash in the sink and drape them over the electric fan, which also acts to mask the noise of the city and the audio from the Peruvian soap opera entertaining the receptionist in the foyer.

While charging my laptop and phone, I contemplate going to Cusco this afternoon, I’d still get nine hours rest but decide there’s no rush and decide to stay the night instead.

On my education in Amazonian plant medicines, I learned that Mambe and Ambil make a good combination for writing. Ambil, a tobacco paste used by the Witoto tribe for prayer to the spirit world, apparently provides the wisdom and Mambe provides ‘Sweet words.’ Discovering that the Ambil had gone missing wasn’t the best start to the day. It must have rolled out of the bag while it was under my seat. I now have sweet words but no wisdom. It could have been worse, it could have been wallet or passport.

The climate in Lima is not too hot and I take a walk across one of the parks to a shopping mall to get something to eat and withdraw some cash. I’m surprised to find Uncle Sam’s footholds: Pizza Hut, Popeye’s and Chili’s. I used to love going to Chili’s when my father and his wife were more receptive to my visits to Houston. Sitting down and browsing the menu was a stroll down memory lane. 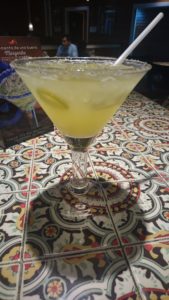 Now, a Mango and Jalapeno Margarita doesn’t sound too appealing but it was one of the most delicious margaritas I’d tasted. A perfect accompaniment to the chicken tacos and watching Real Madrid beat Juventus on three flat screens hanging off the walls of the restaurant.

I wasn’t expecting to like Lima but it was more modern than I anticipated and there was everything anyone could ever want within five minutes walk of the hostel. The city seemed civilised but there was always a question mark on why some of the small stores were caged in with vendors serving and taking money between the bars. Less so in the centre but common in the suburbs.

Wednesday morning dawned through the spaces between the roof and the wall and the horns and whistles built up with the density of the morning traffic. I enjoyed my first piping hot shower for weeks. The on-demand appliances attached to the shower heads only seem to succeed in taking the chill off the meagre dribble needed to give the water a chance to snag some warmth on the way through. This was a proper immersion heater job. I kept the bathroom door open so that the draught from the sock drying fan kept the condensation off the mirror.

I was out of the hostel and into the cafe around the corner by 10:30. 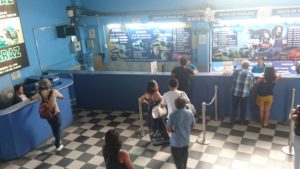 I arrived early at the bus Terminal to make sure I got a seat as I noticed it was busy already yesterday when I arrived before dawn. The bus wasn’t until 5.30. It was 1.30 so I made myself comfortable in the cafeteria for the next four hours…