The Long Way Round to Machu Picchu: Lost City of the Incas 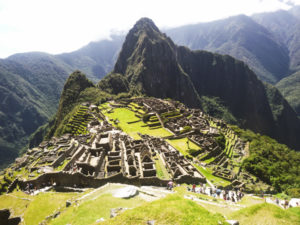 Thursday 10th May. Nobody warned me of the enormous queue at the bus station. The hundred metre line hadn’t moved for twenty minutes until a convoy of four buses arrived at the same time. A flurry of activity and we were soon tacking up the hairpin bends up the mountainside for the next half hour towards Machu Picchu. There was little information or apparent organisation at the gate. A long queue at the entrance was confusing the issue but when I asked one of the guides about Machu Picchu mountain, he pointed for me to edge around the crowd and I bypassed the queue into the site. He advised I should go to the toilet before the tour but also that I wouldn’t have time and I should hurry if I was going to make it at all. So “why mention it,?” I thought. 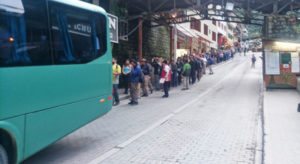 Asking the way a couple of times ensured I was hurrying my way up the right set of steps alongside the citadel and up to the checkpoint where I signed in at 7.45. With relief, I paused for a minute to recover from the climb and catch my breath. Up ahead were a couple and their guide about 20 meters up the steps. I caught them up and asked If I could tag along. Kalwant and his daughter, Laura, from Florida were finishing up their four day Inca Trail experience. 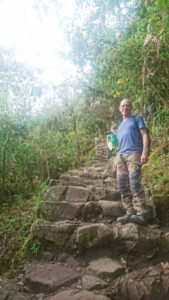 The Inca Trail is an exclusive selection of guided treks throughout the Sacred Valley of the Incas and has limited numbers, which creates a long waiting list. You can’t just turn up a and walk the trail. Kalwant and Laura had booked this trip seven months previous in October. Kalwant at seventy years old was a comparative gazelle moving up the mountain. It would be hard to allow myself to appear feeble in such company. Laura confessed they were training for months on fully inclined treadmills but were unable to simulate the thin atmosphere. Me? I trained for nothing. Adventure itself was my exercise.

The climb was a relentless series of uneven rocky steps, sometimes steep, sometimes narrow, sometimes both. We met a few early risers clambering back down. Not everyone made it to the top but those that did said they couldn’t see anything because it was all was shrouded in cloud. 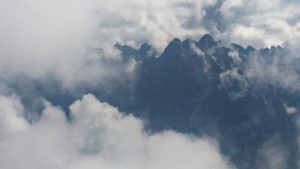 About halfway up, we began to catch glimpses of the citadel below through breaks in the cloud. The weather was perfect for the climb, the cloud shielding us from the heat of the sun. I frequently removed my hat to wipe the sweat from my forehead and allow the high mountain air to cool me in the shade. By the time we had reached the peak after the two hours climb, the morning sun had burned away the cloud, leaving us a perfect view. 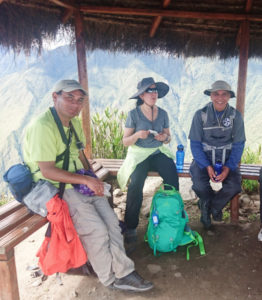 At the peak, there is a thatched shelter and wide viewing areas. There were already about 15 people up here in various stages of taking selfies and getting in the way of each other’s panoramic video sweeps. Kalwant gave me a bag of trail mix and we took photos of us all around the summit.

Descending the steps was easier on the lungs but harder on the knees. Many more people were climbing the mountain now making the descent somewhat busy and frustrating on the narrower sections. They were climbing under full sun but at least getting good views on the way up. 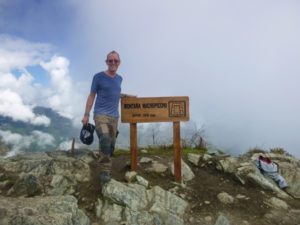 We signed out at 11.15. Three and a half hours after starting the climb. Machu Picchu Mountain is 650 meters higher than Machu Picchu Citadel, which itself is 400 metres above Aguas Calientes.

Following the guide into the citadel, we turned left along one of the terraces passing some Llamas busy keeping the grass trimmed. My colleagues had a flight to catch so had to hurry around the citadel while I rested in the shade enjoying the view and a half melted chocolate bar before embarking on the trail to Inka Bridge. 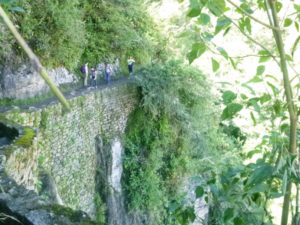 This short trek is not for the fearful of heights: a narrow path with sheer drops and no guard rail. It was a personal challenge which I could not let beat me. Seeing some people standing on the edge looking straight down turned my stomach. I passed those sections close to the rock face head turned away from the drop, trying to focus on other things.

There are a number of guides on Machu Picchu and I quickly tagged onto an English speaking one leading a group of six Brits. Machu Picchu is a fascinating place that has an energy about it and where every stone tells a story. I was conscious that this was Debs dream and I was in it. If she was alive, the mountain climb might have killed her.

I had intended to walk back to the town but the 400 metre descent was too much to think about after scaling Machu Picchu mountain so I bought another bus to save my knees from a further hammering. 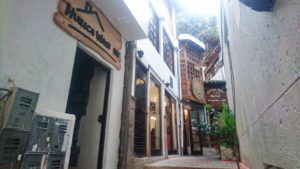 The shower in my room had a hot and cold tap but left me only a selection of cold left or cold right. There are hot springs on the edge of town from which the town gets its name Aguas Calientes (Hot Waters). I borrowed the hotel’s towel and marched up the hill to the thermal baths.
, 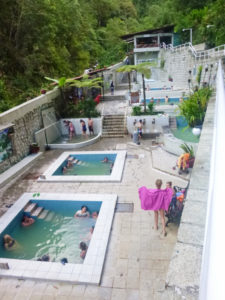 “Eases muscle aches and gets rid of toxins,” the sign says as I soak in the warm waters. “Where do these toxins go?” I wonder looking at the dozen people in this murky greenish water. The warm waters certainly ease muscle aches and pains and I felt refreshed heading back into town for dinner.

I had been puzzled when I first walked through Plaza de Armas in Cusco, about all the massage services being relentlessly touted. I can see why now; so much hiking and sightseeing around the Sacred Valley. There would be a lot of stiff muscles and joints around after a day at Machu Picchu and various trails.

Check out was at nine. I was out at eight thirty for coffee and empanadas before treading the sleepers along the railway back to Hydro Electrica. There seemed to be even more people hiking the railway today; both ways. Unless people were already grouped or paired, no one spoke to each other; not even greetings. 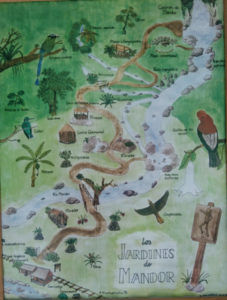 A couple of kilometres along the track is Jardines de Mandor. The name was written in my notebook from recommendations I picked up a while ago. I paid the entrance fee and left my bag in their storage room and meandered around their gardens. A small river of pure crystal mountain water runs through the Gardens into the Urubamba. The river Mandor, barely bigger than a brook with crystal clear water too good not to taste. Pure cool mountain water with a natural sweetness.

The Gardens had a natural feel that fostered a sense of peace and tranquillity, Not so much cultivated as curated… Returning to reception scratching unexpected mosquito bites, the owner encouraged me to visit the restaurant where I bought an unnatural Coka Cola and sat in the garden overlooking the river resting my stiff back and contemplating life. 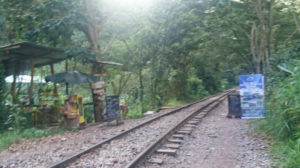 Collecting my backpack and crunching along the loose ballast along the track back towards Hydra Electrica, I was back at the Inti Watana restaurant within a couple of hours for rest, refreshment and another two nachos and blob of guacamole.

Descending the path through the trees to the siding, a train looked all set to go with its big diesel polluting the silence. The car park was alive with groups of hikers and fleets of minibuses. “Collectivo?” I asked. It was half-past two. No collectivo until tomorrow morning. A taxi would be S/20. I decided I would walk. What would I give for a 10Km ride? S/10 would be OK so as I walked, I held out a S/10 note in my hand to tempt any passing vehicles; there would be many judging by the car park at Hydro Electrica and the single road access from Santa Teresa.

Two minutes later the first minibus stops and accepts the offer. Three Peruvian looking workmen were smiling and chuckling, maybe at my unconventional ruse, I don’t know. This was a private vehicle and I climb into the front passenger seat, arm out of the window admiring the scenery as we followed the river back to Santa Teresa. 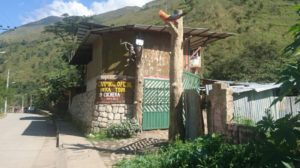 “Aqui, por favor!” the bus stops and I step out and cross the road into the Inka Tours campsite. The tents were out again and crowds of twenty-something Brits and Aussies were milling about. The WiFi was on but there was no internet connection. Not an environment I was keen on hanging around in.

Checking the offline app, Maps.me, I located the hot springs to the North of Santa Teresa.and hopped on the bike for the 4km ride for another long soothing soak. The trail was wide but rough following the path of the Urubamba river 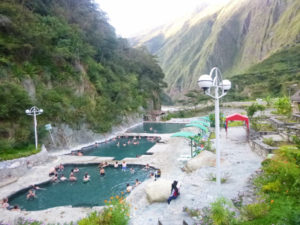 These springs were the same temperature as Aguas Calientes, around 36C, but were crystal clear, flowing from one pool to the other, finally overflowing into ornate showers where we could use soap and shampoo before the water drained into the river. This site was far bigger and more natural with a large cafe area where groups of hikers were chilling out. I stayed for a couple of hours. I hadn’t realised there was a campsite here. Much quieter than Inka Tours. 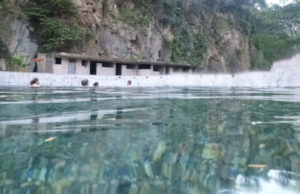 Darkness had fallen by the time my wrinkled fingers dressed my cleansed and soothed body and then sipped a Pisco Sour listening to the blend of the sound of the river between the mountains and the murmur of conversations around the baths. Returning to a tent just here would have been the perfect finale to the day. I could have been tempted to relocate but I was off tomorrow anyway.

In the darkness, I followed the shuddering headlamp beam back over the rocks and grave back to Inka Tours. Gangnam Style was blaring out of the solitary PA speaker and the elevated chatter and whooping of the gyrating hikers had upped a couple of notches. There was still no internet connection so I retreated to the tent to read some Terry Pratchett on the Kindle before being effortlessly drummed, cheered and whooped to sleep.