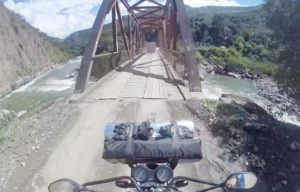 Saturday 12th May, The Aussie chatter in the morning woke me early before the sun had a chance to warm the tent. I doze and wait for the sun to smile on me.

A bright fresh morning for tackling the cliff road back to Santa Maria. Earlier, brighter and drier along the road it looked less foreboding. There was more traffic which stirred up clouds of dust out of the powdery track. 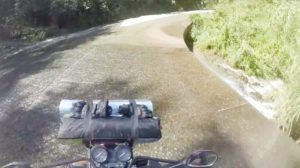 This time I drive straight through Santa Maria and continue toward Ollantaytambo. Abra Malaga wasn’t quite as wet and cloudy at the peak but it was bloody cold. The road was drier too and I felt more confident leaning around the 61 hairpin bends without fear of sliding under the barrier and down a couple of thousand feet of vertical rock. 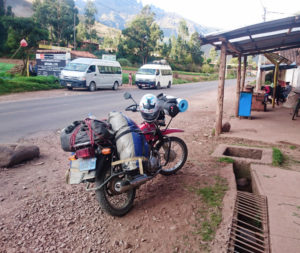 I checked the maps.me app. Arin. That’s where one of the people lived I was planning to hook up with. A friend of a friend. I rattled my fillings over Ollantaytambo’s coarse cobbled roads and out onto the asphalt to the east toward Arin and Pisac.

The smooth straight southeasterly 28B contrasted with the winding mountain pass over Abra Malaga. Rolling along the valley floor without undulation felt like the high mountain walls were directing me like a ball along a gutter. 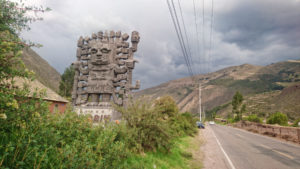 I rolled into Arin just before 4pm and I was hungry. Stopping at a cafe, I looked for accommodation on the apps on the phone. Campo Verde Pitusiray was just down the road just before the Inkariy Museum. I’d stay there. I finished my coffee and got back on the bike. 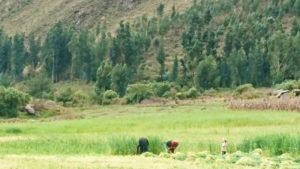 Pulling into Campo Verde, it didn’t look like a campsite. I rode up the grass lane to the farmhouse, the family were out with their harvest of Maize spread out on tarps in the field looking at me quizzically. The youngest woman approached and I showed here the camping emblem asking if this was ‘aqui’? She pointed at the peak of Pitusiray and said no motioning over the peak. Apologising, I got back on the bike and started to leave but hesitated after glancing at the gathering clouds. Rain was on its way. Grey streaks painting the sky between the peaks sandwiching the valley. The direction I was riding.

I parked the bike and went back up to the family asking if I could camp along their drive for S/5. The woman happily agreed and I put the tent up as fast as I could. The wind picked up while I was attaching the rain cover, which became a wrestling match. The rain arrived not long after the gusts just as the pegs were going in and I dived into the tent before getting a good soaking.

I was in a field at the foot of a mountain. When the rain stopped, the young woman came to warn me that water can come gushing down the mountainsides and I should move. There was a bungalow down towards the entrance. I put my tent up on the porch.

The concrete was harder than the grass under the mattress but I was sheltered well and tired enough for a good night’s sleep. 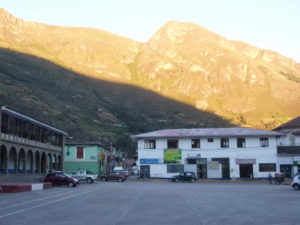 Sunday 13th May, I woke at dawn, cold even with the two fleece blankets over the sleeping bag. I buried my head to minimise heat loss and waited for the sun to warm the tent. I opened the flap of the door to help dry out the condensation. The family drove a few head of cattle by the tent toward their maize field, I waved and bid them buenas dias. When I emerged from the tent I could see the cattle had already set about eating the stalks and leaves left from the harvest. In a way, this seemed a backward way of life but at the same time, so much more holistic than what I knew back in the UK. No unemployment, fewer rules and regulations, the family happily working together, they had everything they needed, Self-sufficient, like.

The sun was clearing the mountains now and beaming down on me. I spread the tent on the drive to dry it out while I packed the bags and strapped them to the rear rack. By the time that was done the tent was dry and packed away on the front rack.

I rode back to Arin for breakfast at 9.30 but found nowhere open. I didn’t realise it was Sunday until I arrived in Calca further down the road. I caught sight of a desperately needed ATM in the main plaza and an open cafe opposite, perfect. Around a table in the porch were half a dozen Aussies, Rucksacks piled on the footpath nearby. They were talking loudly and I’m sure they were part of the group that was at Santa Teresa a couple of nights ago.

I asked them if they knew of any WiFi nearby, I needed to find a campsite or hostel without randomly riding around Peru. “We haven’t had WiFi for ten days.” boasted a rather loud young blonde girl. I inferred a ‘no’ from that response. It also suggested that this was part of the group from the campsite at Santa Teresa.

After breakfast, I rode around the town looking for accommodation. A hostel that was indicated on the map was in the middle of a Sunday street market so inaccessible by moto. 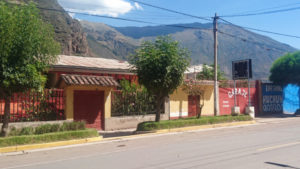 The campsite on the map couldn’t be found where it was indicated, one hostel was S/80 a night and three other hostels were closed. It was Sunday. I rang the bell at Cabell on the main road through Calca and was answered by a young woman who spoke excellent English. The room reminded me of a Cornish cottage, low ceilings, small window looking out into the garden and polished wooden floorboards. The bathroom was next door but there was no-one else on the same floor as me so was almost an ensuite. It was perfect.

Calca is a plain town with no tourists except for stray hikers. I had a comfortable private room with good wifi for catching up on blogging and videos. The cafes were cheap and the days warm…

Previous post: The Long Way Round to Machu Picchu: Lost City of the Incas