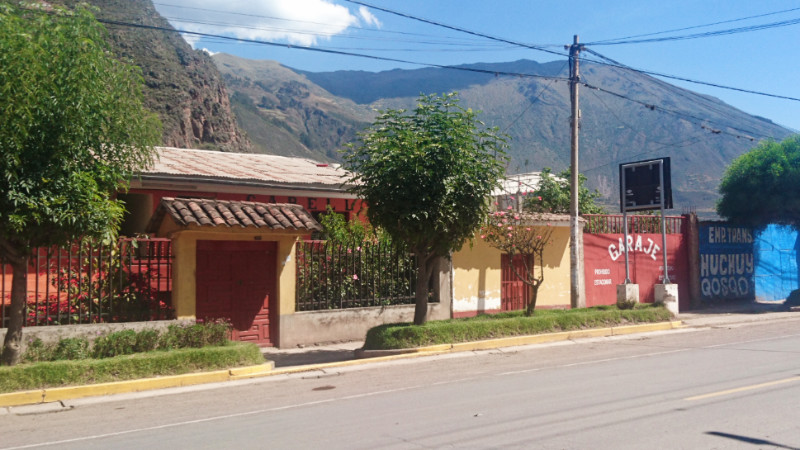 Three days later, I checked out of Hospedaje Cabell and rode into Plaza de Armas for a final omelette and latte at the cafe on the Plaza and hit route 28B down the Sacred Valley of the Incas through Pisac and down route PE3S toward Ayaviri, 268 km south-east closer to Bolivia and a thousand metres further away from sea level.

The longer I rode, the thinner both the traffic and the air got. The sun got hotter and the wind got colder, letting me know my altitude was increasing, eventually peaking at 4300 metres. The road along the valley was much straighter than through the 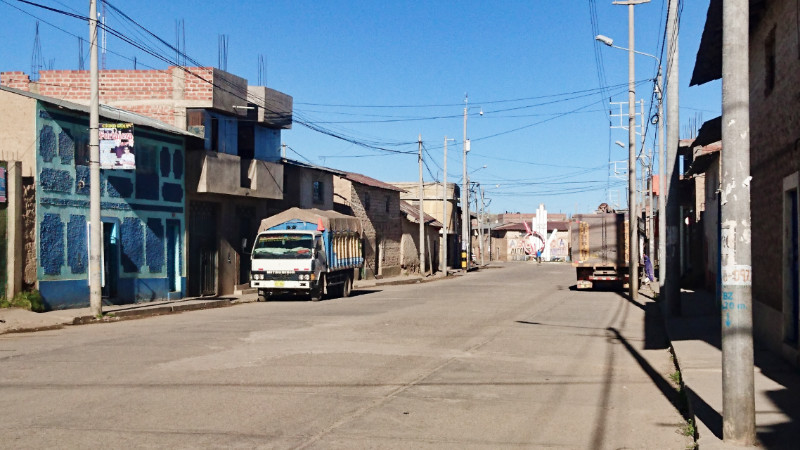 mountain passes around Ollantaytambo and became straighter the further south I went. The scenery changed from steep alpine rocky giants left and right creating a natural channel, to rolling wispy grass hills and wide open, flat plains. It didn’t seem like planet Earth at all. Arriving in Ayaviri felt like landing at a moonbase. I had an option of campsite here or hostels. The air felt so cold, even in this clear blue sky with the suns rays irradiating me, that I opted for the relative warmth of a building rather than nylon shelter. 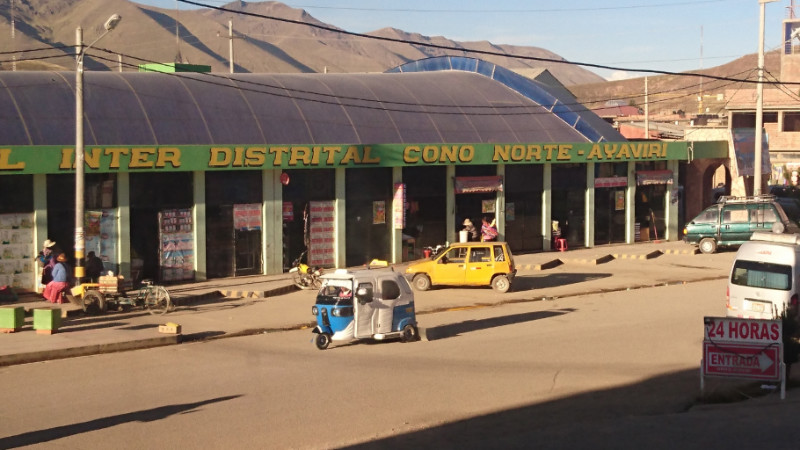 Walking around the town and looking at the landscape, it wasn’t the moon I was on, it was Mars. No vegetation apart from thin grass lining the hills, dust stirred up by the three-wheeled motor rickshaws and a sky bluer than I’ve ever seen. It was noticeably harder to breathe simply walking about. Mars has a thin atmosphere too. The altitude here is just short of 4km above sea level. Staying in the sun to absorb the warmth through my jacket, I grabbed an early dinner at a Polleria and retreated to the hostel.

I lay on the bed with my jacket on and hood up typing up my recent adventures wriggling my cold feet still encased in their boots. I’m on the Alt1 Plano, a giant plateau stretching cold empty miles between Peru and Bolivia. It’s not going to get any warmer, I imagine this is how it’s going to be until I’m finished in Bolivia. 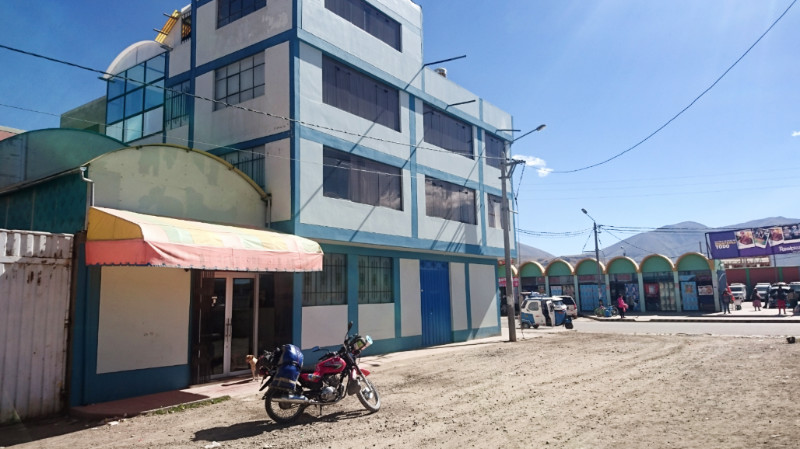 At half past six, the warming influence of the sun is subtracted from the day’s equation, I get ready for bed. My urine is dark amber, reminding me I need to drink more water if I am going to avoid a dehydration episode like I had in Bogota. I climb into bed still wearing my jacket with the hood up. There are three thick blankets and my feet soon warm up. My room is cold, as it’s on the side facing away from the afternoon sun. If I’m lucky, I’ll catch the early morning sun’s rays through the windows. I’m going to need some windshields for my hands on the bike and start wearing my rain gear for insulation. Tomorrow I’m bound for Puno, only 167km, or if it’s going well, Copacabana 284km plus a border crossing on the Bolivian shore of Lake Titicaca. We’ll See…

Wednesday 16th May
The sunlight beams through the frozen gap in the curtains that I open as wide as I can. The sun brings plenty of light but little warmth. The people I see out of the window are clad in heavy coats and hats and the moon-buggies travel up and down with their modified car alarms attempting to emulate a siren for ensuring optimum progress through the meagre traffic.

The shower had two faucets: one labelled Frio for cold and the other labelled Caliente for just as cold. I skip it. I notice some itchy bumps on elbows and knees. Wherever the insects were, they weren’t out in the cold. Their home was probably in the thick warm, woollen blankets I buried myself in last night.

This morning, I am not hungry. The water out of the tap tasted fresh and clean so I topped up my bottle and took a few gulps. The bike was already packed just as I’d left it fully loaded in the lobby. Full choke was needed to start in the cold, thin air and soon I was off through the city centre of Ayaviri and onto 3S south. The road was laser straight for Kilometers on end with little change in altitude. The cold was getting to my knees. Puno, I would stop in Puno.

The stark landscape slowly transformed into rich farmland, trees began to appear and some undulations and bends in the road began to bring interest to the journey. I was back on planet Earth. 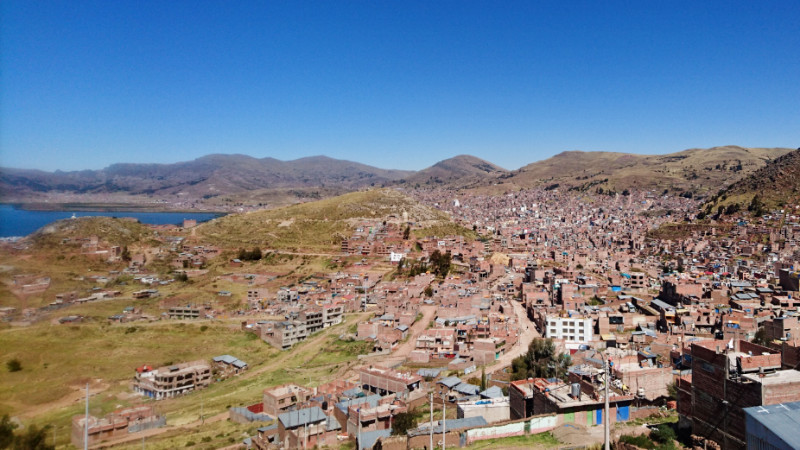 The roads began to curve and undulate and suddenly, Puno presented itself in its full mediocrity while rounding a bend over a rise and descending into the suburbs. The beauty of the place was wholly dependent on its proximity to the lake. Peru’s version of Skegness or Margate, with its fairgrounds and sparse, ramshackle attractions. 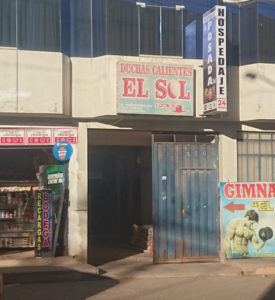 I cruised along the city’s coast and spotted a hostel sign among many I ignored. “WiFi y Aguas Calientes” Perfecto and, with permission, I rode into the courtyard reception and unloaded the bike. My room was upstairs. The WiFi only worked outside and I was in the shade which made it a short and chilly session. I tried the shower: cold dribble. The duchas calientes were not included in my ensuite, they were in a block downstairs past the building site that was pouring concrete into vertical wooden cases laced with steel rods, making columns. I skipped it, I wasn’t sweating in this climate. I’d keep… 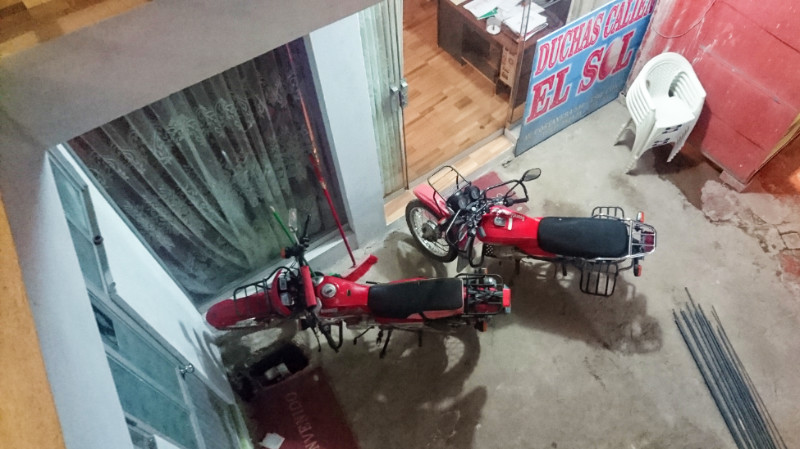 My room was room No 1 at the back, away from the road but next to a fairground that would spark up Gangnam Style and La Macarena as soon as the sun went down. Ah well, what else to expect from previous experience. The bed was warmer than the one in Ayaviri, with its 5 heavy woollen blankets and apparently uninhabited by creatures other than me. The double bed meant I had two pillows so was able to sit comfortably and type up some notes. The ambient temperature was warmer than last night too… and I began to get comfortable, which had been a warning 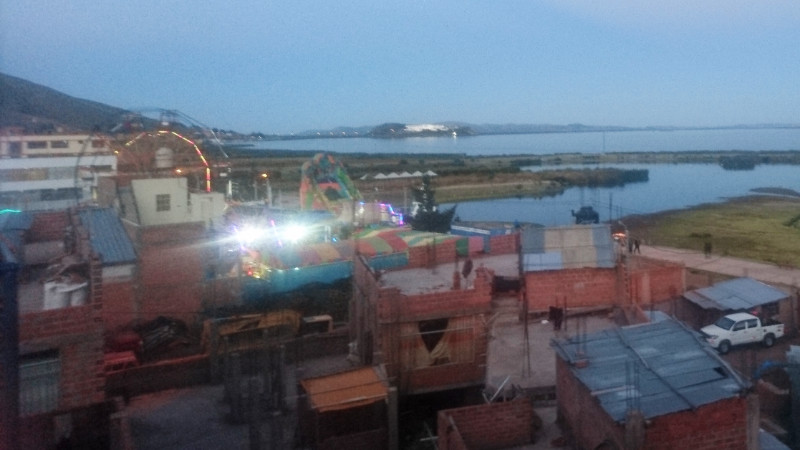 from mother Ayahuasca not to settle for, and I abandoned the temptation to stay one more night. Anyhow, Copacabana was only 145Km away. It doesn’t sound much but the bike is slow. Even on a loaded YB125 that does a maximum of 80km/h on a level road and an average of 50km/h, it means sitting 3 hours in cold wind.