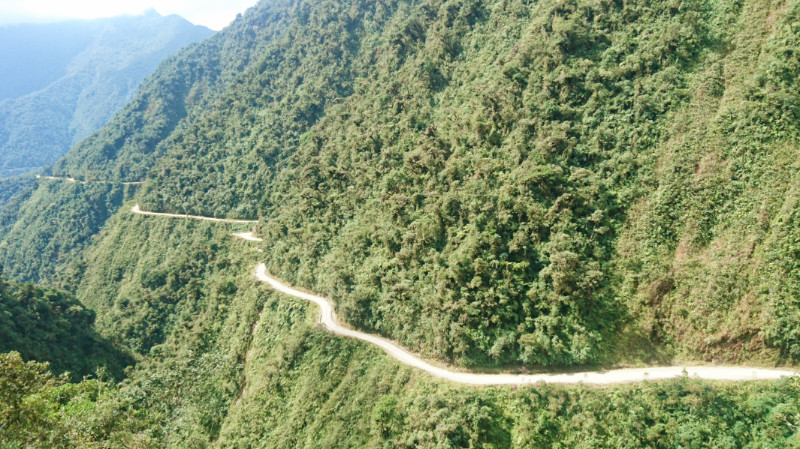 AS THE TYRES left the smooth black asphalt of route 3 and crunched the gravel of El Camino de la Muerte, first impressions were that it was very similar to the Santa Teresa road in Peru, only higher and strikingly more beautiful. At a height of up to 800 metres (2000ft) above the river in the jungle below the mountains, it was a gut-churning experience seeing the road and mountain rush pass in relation to my motion and the distant jungle floor, being so far away, appearing to not move at all. 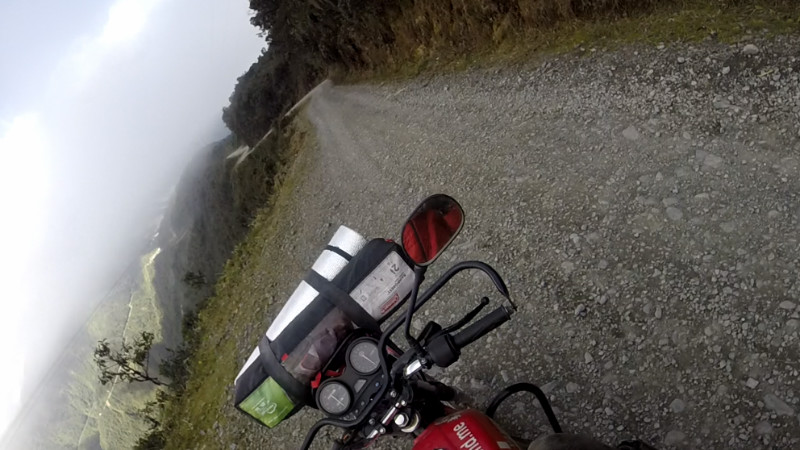 The cloud was left far behind, clinging to the peak near the start of the road and I was warmed by the sun as I slowly descended. The road weaved in and out of the mountains, some edges having crumbled away revealing the vertical landscape. Cooling splashes from waterfalls that landed over the road and continued along and over the edges. So beautiful is the scenery that it distracts your gaze. With the road at as narrow as three metres in places, distraction wasn’t wise, with death a metre or two away. 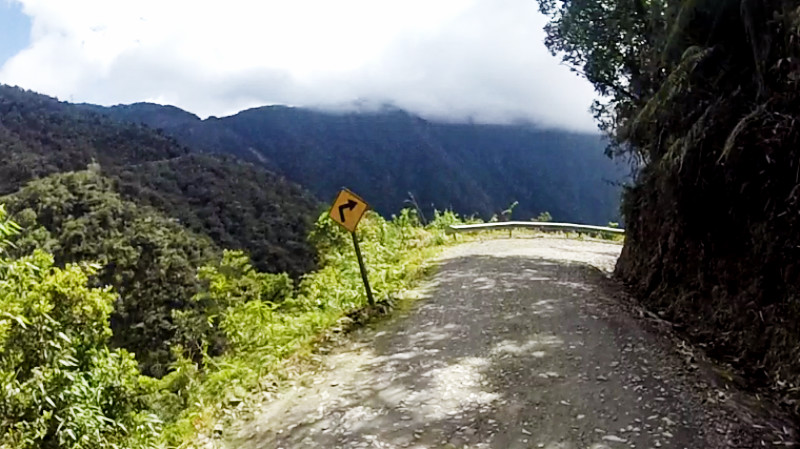 Some way down the road, I was stopped at a toll gate, You pay to get in these days. like a fairground ride except you bring your own equipment. Further down: traffic. a tour group on mountain bikes, lycra clad adventurers on a briefing watched me and my luggage idle by and out of sight.

Reaching the second toll gate near the end, and a big wooden sign celebrating the monumental road gives the impression that the danger is over. It’s not really, there are still shear drops off the side of the road all the way on down to Yolosa just before and below Coroico. What’s more, the road surface turns from coarse rock and stone to fine sandy powder and dust. The front wheel feels the urge to move sideways away from the weight of the bike. Steering beyond a few degrees has diminishing effect and has to be slight and smooth as well as gently leaning around the bends. 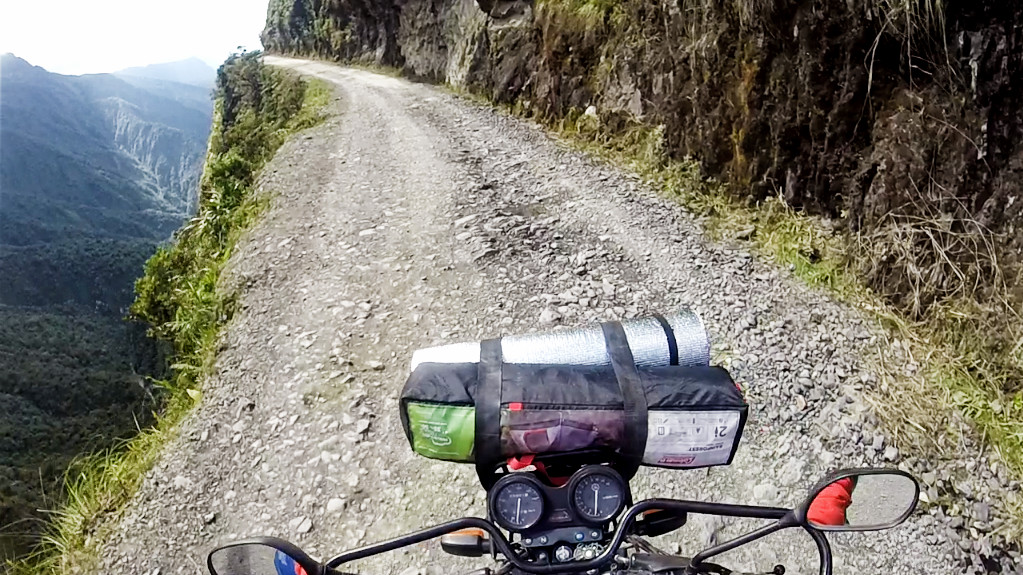 The temperature had risen steadily as my altitude dropped along the road and I was now sweating under the same jacket that was keeping the chills away only a couple of hours earlier.

Now climbing the cobbles into the mountain village of Coroico, the bike had noticeably more power now as it was catching its breath. Through the bustling 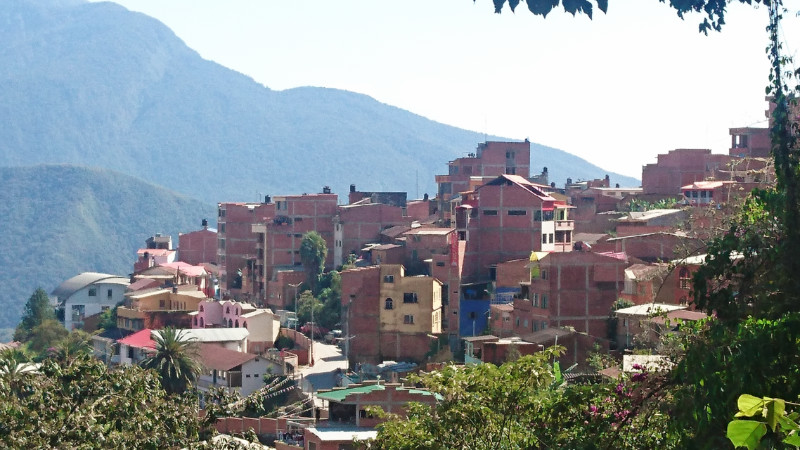 Plaza and down the steep cobbles the other side, brought me to the gate of the El Gecko campsite. A family-run hostel and campsite with stunning views over the valley at the end of El Camino de la Muerte, North Yungas.

My tent was erected on the edge of the lawn overlooking the mountains. Warm weather, sand flies and mosquitos. You can’t seem to have everything. Pinpoint spots of blood on my arms revealed the presence of near invisible sandflies. Tomorrow, forty-eight hours of incessant itching would begin… I don’t know how that works, but I cover up from now on. 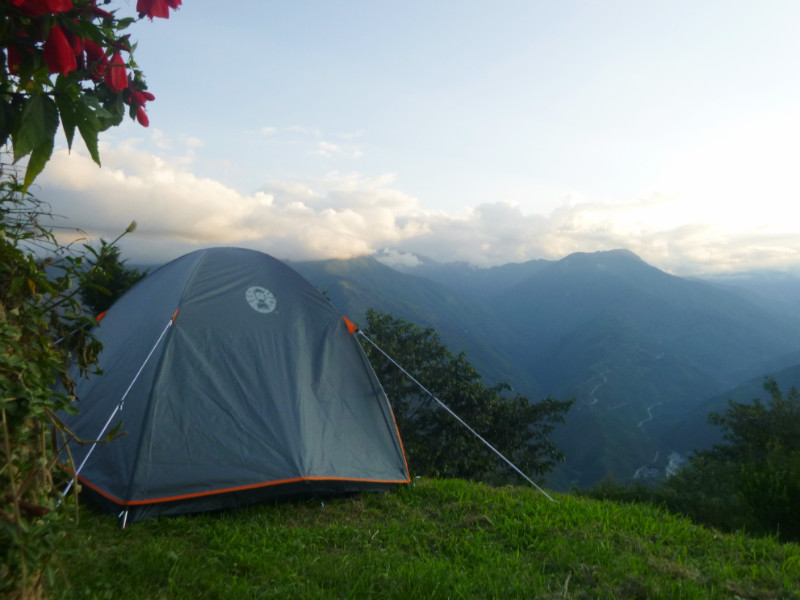 Once base camp on the lawn was established. I collected my laptop and notepads together in a satchel and set about climbing the cobbles to the village. It wasn’t too far but still arduous. At 1700 metres, the altitude was noticeably easier to on the lungs compared to Titicaca or La Paz. I was out of breath but I could still carry on climbing.

Coroico is a beautiful little mountain village. Plenty of accommodation, cafes and restaurants but hardly any wifi, or even places with a spare socket for recharging. The opportunity to write, edit videos, blog and even read with the kindle app disappeared with the slow death of the battery charge.

“Free Wifi,” says the sign in the Cafe window and I order a coffee and sandwich. “No, senor, no WiFi.” Ah well, look out of the window then. Wifi in Coroico seems to be a marketing ploy rather than a technology. Time is yet to catch up with Coroico.

Coroico is the ideal honeymoon spot really since there’s nothing much else to do. There’s not much to do at the campsite either, so I walk to the church on the hill above Coroico and back. Hot and dusty, I sip water and rest in shade and explore possible escape routes for the bike should it not make it back up the steep cobbled street from El Gecko to route 40 through the middle of town. 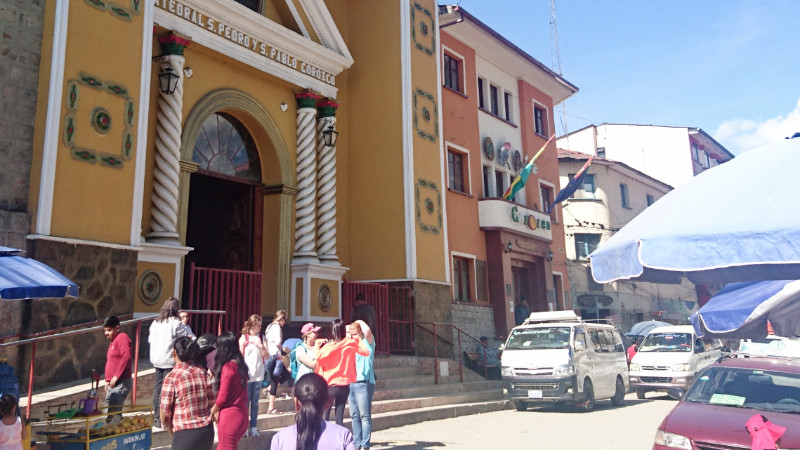 I’d left my phone with Fernando to charge. I’d be glad of that later: no book, no light, no wifi or PC. I’d look forward to reading the Kindle. My equipment list needs some tweaking to accommodate ‘vida sin electricidad.’ A quartet of young French travellers had arrived and pitched their tents not far from mine. “Bonjour!” I call. They turn… nothing and they look away. What am I invisible? They stick amongst themselves and we share the campsite as separate factions. Me in my group of one and them in their group of four. 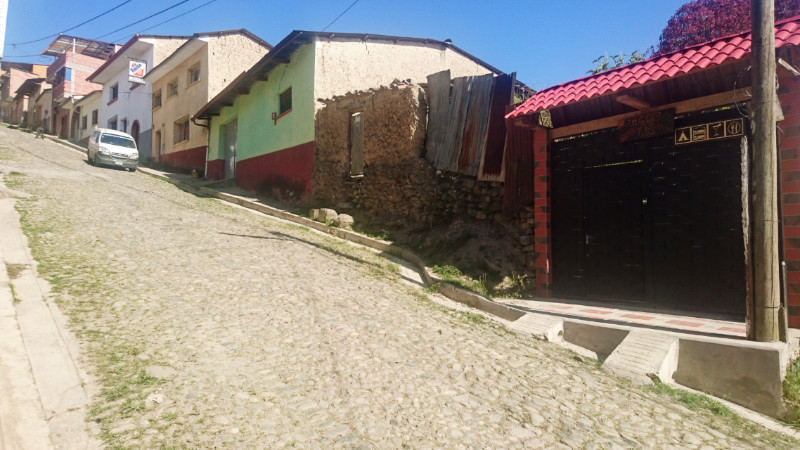 After dinner around the Plaza, I return to El Gecko about an hour after sunset. The French quartet are socialising around the table about fifteen feet from my tent. I secretly hope they aren’t going to be long, or loud, and I retrieve the phone from Fernando and retreat to the tent with my Kindle app, tucked up in my sleeping bag reading against the gentle murmur of muted conversation and laughter.

I check the map on the phone for tomorrow. I could not see the value for me staying another day in Coroico. Route 40 from here intersects route 25 and wiggles its way nearly five hundred kilometres to Cochabamba. I could head there tomorrow. In any case, I have to cross the river at Puente Villa fifty kilometres away first. A good opportunity to assess the state of the road before deciding whether to commit east to Cochabamba or west to La Paz. Where the faster roads are… Meanwhile, I bundle the blankets into a pillow and settle down into the sleeping bag to the lullaby of crickets, frogs and distant barking dogs…