The Heights of El Alto 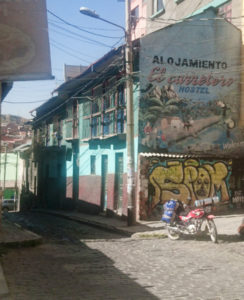 RATTLING ALONG THE cobbles, I had the sun on my back finally riding to Cochabamba. The warm dry morning eased my thoughts about camping out in the chilly nights of the Altiplano and I set my focus on the weaving taxis and buses as I threaded my way through them out of La Paz onto the escalating loop into El Alto.

As usual, the minibuses were jostling for position at the bus stops just beyond the toll gates and I cleverly weaved through to the outside lane only to discover a blockade, diverting the already congested traffic onto route 2 towards Peru. 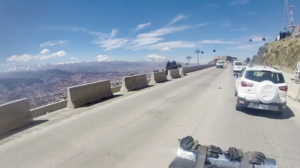 Trapped between the barriers of the dual carriageway, I noticed a coned off gap in the central reservation. Over the other side of the road, a lane filtering off into El Alto was congested by inbound minibuses. Cutting through the cones and past the buses exchanging passengers for pedestrians through their sliding doors, I found myself back on route 1 and the sporadic drag races from traffic light to 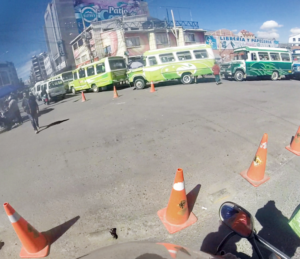 traffic light. The fuel gauge was nudging ‘E’. With the pressure off battling urban traffic, I could divert my focus to watching for a fuels station.

Refuelling involves the attendant looking at my number plate and, this time, checking my passport in order to fill up. Bolivia has two rates: domestic and international, which is up to three times more expensive for foreigners like me. 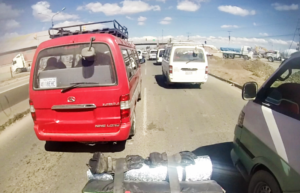 Pulling out of the Fuel station, heading south on route 1, the urban sprawl was slowly dissolving into flat plains. The air was noticeably cooler as my cruising speed was increasing through the heights of El Alto. With the disappearance of the city suburbs, the plains looked like desert but there was evidence of crops planted in vaguely marked fields. Dry and barren looking, I wondered how anything managed to grow under the radiant, parching sun and the ice-cool moon.

80km/h is the top speed of the Yamaha on a flat road but there’s no hurry to get anywhere. Whatever I do, it will take two days to make the 385km to Cochabamba so I wind back the throttle to the speed starts to drop in order to save fuel over the hours trundling down the straight black ribbon of route 1.

As the hours passed, the stiff knot in my shoulder revisited from being locked in the same position for so long. Rolling my neck and twisting my head from side to side bought me the pain relief I needed for the extra miles before seeing the sign for route 4 to Cochabamba. I had reached Caracollo, just over half way to Cochabamba.

It was early enough, at just gone three, to consider carrying on but I hadn’t eaten all day. Cold and Hungry riding through, three parked coaches in a huge dirt parking lot caught my eye as I approached the bridge, Puente Caracollo, I hung a U-turn over the bridge at the junction with route 4 and pulled into the restaurant next to the dry river bed, parking on a hard standing between the coaches and the restaurant.

The restaurant was a large spartan canteen, L shaped with columns between the red plastic patio furniture. I ordered a chicken sandwich and coke and settled down on a table in a square of sunlight beaming through the window so as to warm up while watching the Russia – Egypt world cup game. Still hungry and cold, I ordered “uno mas, por favor!” just one more…

Checking the map, I had already travelled nearly 200km and I had maybe 3 hours of daylight left, max, and another 185km to go. That would leave me somewhere in the hills overnight. 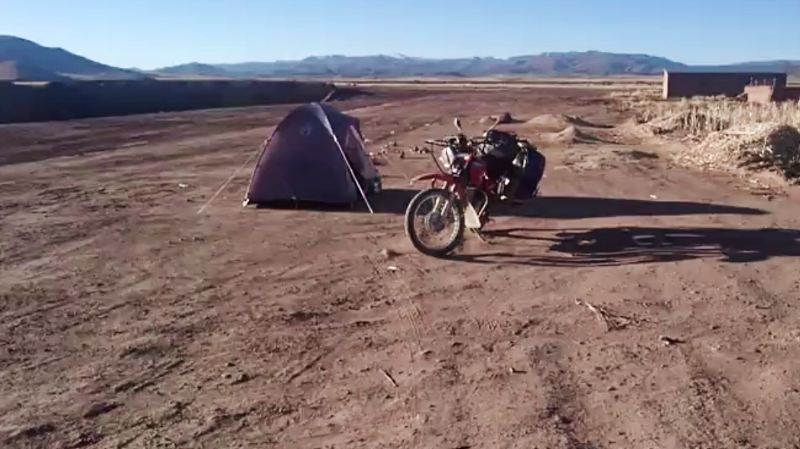 Just over the river were two hostels: Alojamiento Panamerica and Pension Villa Puente. Too early to turn in and too late to set off. I decided to head to the wild camping spot a few kilometres down the road, apparently next to a giant gravel mound at a quarry. Turning off route 4 onto a farm track and travelling about five hundred metres across the flat featureless landscape, I came across a giant hole in the ground about a hundred and fifty metres long and a hundred metres wide, with a few farm shacks to the eastern edge. I rode around to that side and found nobody there. The place seemed deserted for miles around and the hard flat area surrounding the hole was a perfect pitch and I broke out camp right there with the tent’s entrance estimated to the part of the sky that the sun would rise. 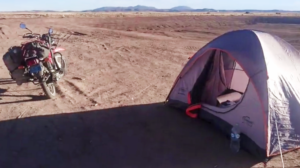 The afternoon was late but the sun was still about an hour off the horizon. The breeze was light but getting colder and I found sanctuary inside the tent – a perfect temperature in which to rest, warmed by the falling sun. Checking the map, I found I was only halfway to the marked wild camping spot. I could still see no mound or quarry. No matter, I would be gone early in the morning. I would stay here.

I lay back on the mattress to read for a while. I hear panting! a dog had approached the rear of the tent and I quickly zipped up the entrance. I had noticed increasing numbers of stray dogs miles away from anywhere, some laying by the side of the road. Some wandering alone, some in packs. There is no guarantee that they are friendly. I stayed quiet and listened for signs of its owner, or the sound of sprinkling on the tent. Nothing…

I was tired after the ride and fell asleep reading the Kindle and awoke in darkness to snuggle down into the sleeping bag. 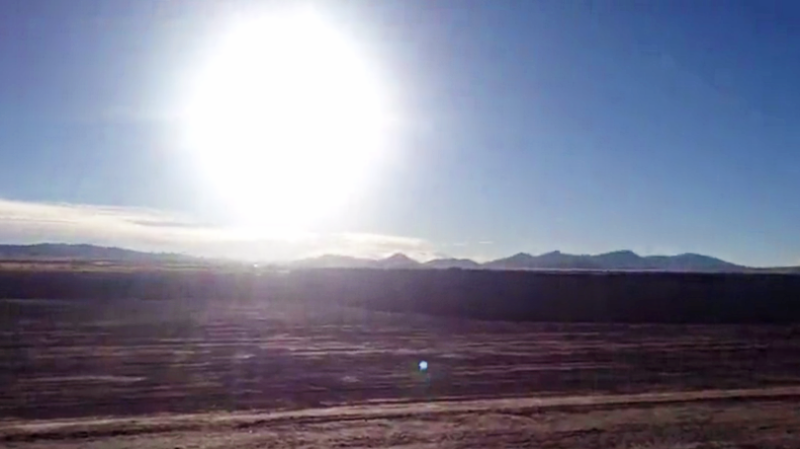