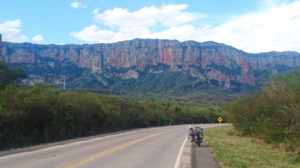 EARLY AFTERNOON IN the wake of England’s second defeat to Belgium in the World Cup and I’m eastbound on Route 4. Estancia Aguas Calientes is only 165km and I take it steady to save fuel. I pass the gas station at Robore with the gauge just over a quarter but gamble on fuel being available at Aguas Calientes 30km further on. “Get it while you can.” Is my fuel mantra since I don’t yet carry reserves. Rarely do I obey it though and start fretting when the needle plummets below the last quarter mark. 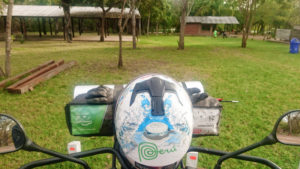 Bearing right off the highway onto the red dirt track to launched me into a sand pit and the Yamaha’s narrow tyres fight to stay on the surface. I haven’t mastered riding in deep sand yet. The steering doesn’t work and the rear wheel drifts sideways. Losing momentum results in the rear wheel trying to bury itself as I try to move off. I try to find the firmest looking car tracks and keep moving forward, paddling my feet like a swan trying to take off from a lake. 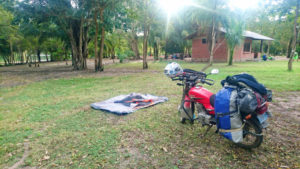 I ride into the Miraflores Toucan campsite around 16:30. I spot only two other tents here down in the far corner near the waterside. I select a quiet area near the trees and no other attractions. Quickly pitched, I change into shorts and t-shirt, grab a towel and stroll down to the lake. 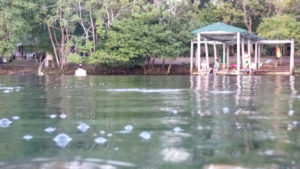 34C feels surprisingly warm and I wade out, waste deep toward the shimmering surface where the bubbles are breaking the surface, crystal clear water, into the warm humid air. I soak until the sun sets, stirring up the sand and attracting the fish to whatever’s being released by the bubbles. Every now and then, I feel a nip as a fish forages for food. A school of them find the flaking skin between my toes where I’ve contracted athletes foot and nibble away. They can have that 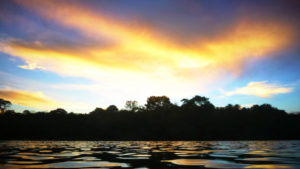 Out into the tree-shaded campsite, the moon is a thin crescent, not enough to add to the sparse lighting around the site. I buy a beer from the attendant and ask about fuel during our conversation. “Robore.” he says. I’d seen that fuel station 25Km back from where I came. I laugh and feel I need to explain why. It was the station I had passed way back. He tells me someone in the village sells out bottles for 5bob a litre. I say, “That’s cheap” and he says “No, muy caro” until I explain the international rate of “Ocho por litro!” He shows me on my sat nav app where to go in the village. The main thing is I don’t have to backtrack for 8bob a litre. 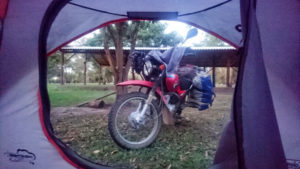 The dawn paints in a rose petal sky as I enter the warm clear waters of the lake. I consider going in naked since it’s early and not many people are around. I play safe and keep my briefs on, followed, ten minutes later, by a family of three. 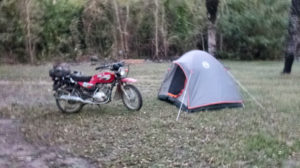 I decamp and pack away slowly to scoot the bike along the sandy track toward the fuel bottles in the village. After asking a couple of stores, I found a private cabana on the corner. “Seis!” he tells me and I ask for six litres without haggling the sixty pence difference. He looks like he needs it more than I do. Six litres tops me up just perfectly. 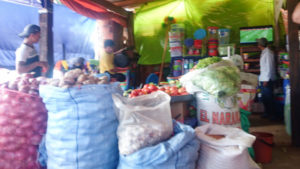 The sat nav indicates a restaurant perched on the bypass around the village but it doesn’t seem to exist in my physical reality. The time was 10:50 and the World Cup Final between France and Croatia was kicking off at 11. I hang a U-turn at the junction and cruise back into the village to the store across from the fuel vendor that I noticed packed with people settled in plastic patio chairs.

I thread myself between the crowd and the stacks of fruit and veg and order a cold Coke and ask if I can watch the match. The seats are all taken and I prop myself against his fridge for a two-hour stint on my feet but the shopkeeper brings a stool out and invites me to sit next to his potatoes.

Everyone appears to be cheering for Croatia. Seems, we all like the underdog… The breeze through the store takes the stickiness out of the tropical humidity and the open-sided shade of the store was the perfect place in the World for watching a World Cup Final. 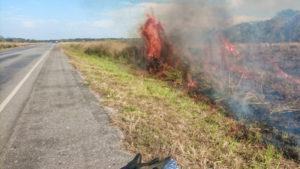 Shortly after midday, the little Yamaha was humming its way eastwards toward the Brazilian border, 210km away. I wanted a break before tackling the bureaucrats, so my target was to be a wild camping site near Yucuces, 165km away, which would leave about 45km to the border the next morning. Today though, a fast but leisurely journey on these straight and level roads. Time enough for Sunday lunch in El Carmen Rivero Torrez, 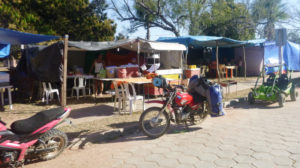 Turning of the El Carmen bypass, the hexagon paving blocks are cute to look at but rough to ride on and they deliver me to a bare looking Plaza surrounded by market stalls and booming PA speakers. I find a food stall just off the Plaza and face the customary plate of chicken and rice. A cold beer helps both relax and revive me. I check the sat nav for my destination. 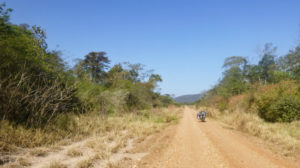 The wild campsite on the sat nav gives no clue to landmarks to look out for and I add the distance of the junction that leads off the main road to the milometer and count down the miles along route 4. There aren’t that many junctions and the turning I finally take is the only candidate for miles. A loose gravel track leads north away from the main road for five kilometres. Tall dry pampas half obscures a pair of laybys that combine to make a turning circle with a six-metre radius. Nothing here but tall grass, gravel and telltale signs of campers. Litter remains scattered over the floor: blister packs for tablets, cotton buds, food wrappers, used batteries, tissues. Man tracks… 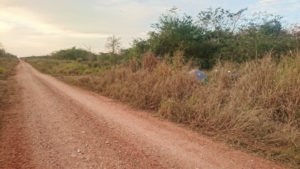 Early evening brings out the flies, dancing before my eyes, distracting me as I pitch the tent in the edge of the pampas, flattening the grass for creating a softer sleeping base over the underlying gravel. I wheel the bike close to the tent and, from the track, I’m almost invisible. Passing traffic would have to look 90 degrees to notice me. Nobody passes, day or night.

The only sounds in the night are of nature, birds I’d never heard before, no traffic or booming music. The black sky scattered with stars and the pale belt of the milky way directly overhead. In the day, an uninspiring laser straight country lane. By night a magical alien soundscape and a firmament so clear and bright and close enough to almost reach with outstretched arms.

A creature sounding about the size of a small dog brushes past the tent. I lay quiet and it disappears as fast and silently as it came…