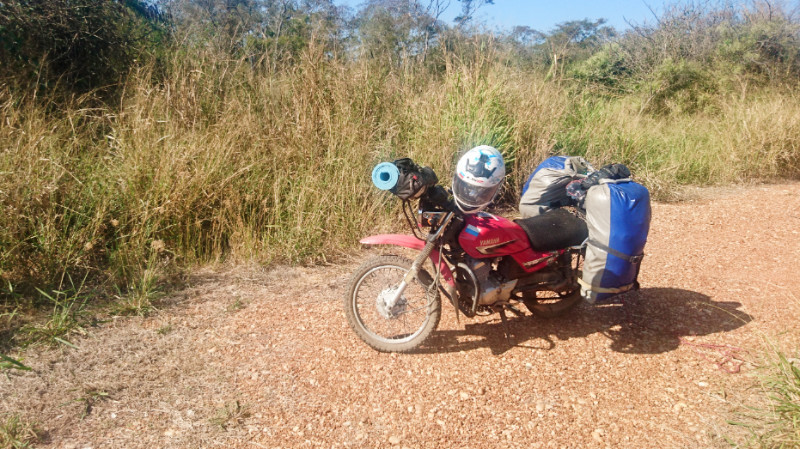 I AWOKE AT dawn but only emerged when the sun had risen a clear hour above the horizon before I packed away. I refuelled at the border town of Puerto Quijarro to use up my remaining Bolivianos and breakfasted on chicken and rice at a locals cafe to work up to engaging with the border agents just down the road. 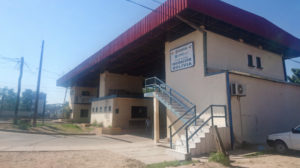 I breezed through Bolivian Migraciones: three people in front of me then: stamp, vamos. Over the road at Aduana Nacional, the gates were firmly closed. A sign indicated Cerrado from 12.30 to 14.30. It was now 12.47. ~ most unexpected. I’d have skipped breakfast if I’d anticipated that. 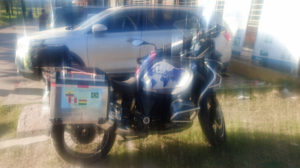 None of the cafes nearby provided WiFi. Wandering around the dusty, sun-baked street, I decided I may as well hang around the Aduana entrance. There was a family already there. Time crawled by as I kicked over the gravel in the car park. More people began to gather from 13.50. I was glad I’d decided to wait here as the queue expanded to about 8 people by the time the bolt was slid across to open the gate.

Sitting at the counter was a young guard, looking not too long out of school. Clad in military olive green, pistol prominent in his holster and tasked with fielding the customers. After an hour watching office workers wandering between desks, sheets of paper clasped between fingers and thumb ( a trick I used to use at an old office job in order to look busy) I’m invited in and told I need two photocopies. “Over there at the photocopier?” No across the road at the shop. “Just these two?” Yes, just those. 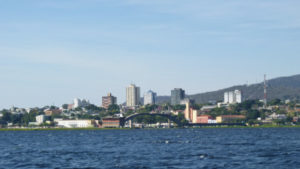 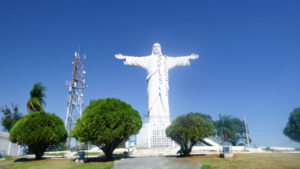 I returned and presented the documents to the armed guard at the desk. He said, “You need copies of these two as well.” And I marched, stone-faced, over the road to buy two more copies. I shouldn’t have felt surprised really. The documents disappeared into the back office without explanation. Watching the clock at 16:00, I thought, “Not much longer, the office closes at five.” Eventually, a portly official summoned three of us together and we followed him and his camera downstairs to our vehicles. Me; a young Bolivian, smartly groomed, gaudy jewellery, crucifix, baggy shell suit – common in the 90’s and a clean white car, the thought, drug dealer sprang to mind; and Carlos with his mighty BMW Adventure 1200, badged up with all the countries of the South American continent. The agent snapped pictures of the licence plates, chassis and engine numbers before we obediently filed back upstairs to his office.

16.30 I’m released into freedom, documents in hand ready for tackling Brazilian Migraciones. The Brazilian queue stretched out of the door and about ten metres along the sidewalk. We appeared to not move for some time and then suddenly shuffled forward a handful of metres like a blockage had been cleared. I secured my entry stamp no bother. “Is this all I need?” Yes and, with an impatient wave from the official, I’m out of the office and into Brazil.

The dull, grey, unmarked customs office across the road went unnoticed and I happily sped east away from the border into Corumba. My error was exposed when a couple of German riders, Manuel and Frank arrived at the hostel and I mentioned I only had to get one stamp compared to Bolivia before happily riding into Corumba. 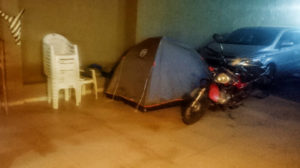 Me, at home in Corumba 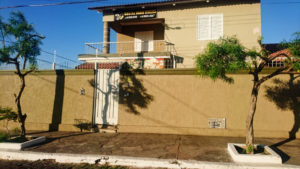 I returned to the border twice in the next few days: one to pick up the instructions for filling out the import permit form online and again to bring the printed out form into the office. How about setting up a terminal and printer for the purpose of getting it done there and then guys?

Road Riders Hostel is a friendly place and I had the option for pitching the tent in the carport/bar area for half the price of a dorm. I took that. The tradeoff, apart from a thin 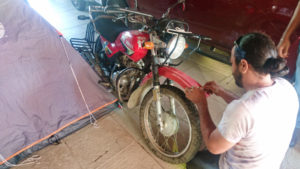 mattress on ceramic tiles, was the late night chatter in the bar followed by early morning chatter as the staff cleaned and prepared the hostel for the day. I caught catnaps when I could and found a quiet corner whenever a party sparked up. 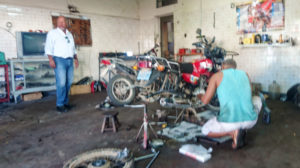 The steering on the Yamaha liked to stick straight ahead and caused me to weave around bends. Diego is a mechanic but recommended Baixinho Motos and I dropped by the very next day. Baixinho spoke no English but understood the problem as I pointed at it and mimed the issues. He also detected worn swing arm bushes by wobbling the rear tyre from side to side, a good fifteen to twenty millimetre of play from side to side. No wonder I was weaving around the bends. I left the bike with him and he fired up a spare moped to drop me across town to the hostel. 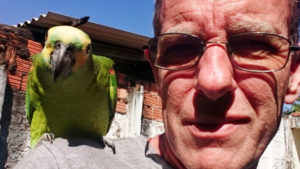 The next day, Diego gave me a ride back to the garage. Baixinho pointed out the worn sprockets and chain and I tell him I have new ones back at the hostel. Diego drove me back to the hostel to pick them up. Baixinho said could fit them on the bike within an hour while I waited. He introduced me to his parrots out the back. They were talking to me but I didn’t yet understand Portuguese.

The bike was given a comprehensive service including an oil change. The bill came to around R250 (£55). Manoel, a customer with a Yamaha 250 asked me about my journey on the little 125 and invited me to his home for lunch. With our limited language skills, we could barely communicate but I happily accepted the invitation. 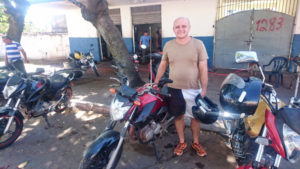 The YB125 felt like a new machine: light clutch, stable cornering. Much more secure in its handling. I couldn’t help letting out groans of pleasure inside my helmet. We enjoyed a pleasant lunch and chatted via broken English, Portuguese, Spanish and google translate. 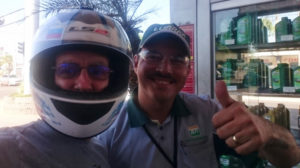 Buenos Aires Bakery, in Corumba, serves delicious cappuccino and fresh sandwiches. Whenever I visited, there was only ever a maximum of six people present, mostly waiting at the checkout due to the cashier being so slow. I helped myself to chocolate and juice off the shelves’ holding them up to get the nod from the cafe staff before and returning to my table to wait for the coffee and sandwiches. Later at the checkout, 15 Reals rang up on the till as I presented the empty chocolate wrapper and bottle to the cashier. She forgot to add the coffee and sandwiches from the tab of table 3.

Later, at the supermarket, it dawned on me that the bill came to only about £3 and so I returned to Buenos Aires to pay the balance. They had no clue that the bill was unpaid and we ran through the menu to tot up the missing items. 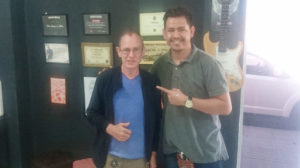 Despite the electric fences around people’s houses and the broken bottles cemented into the top of high walls, Bikers leave their bikes unsecured with helmets hanging on their mirrors. Cars are left with doors unlocked. Brazilian people appear to be honest, open and trusting. Probably the friendliest place I’ve been to so far. The sort of world I’d like to live in… Friendly.