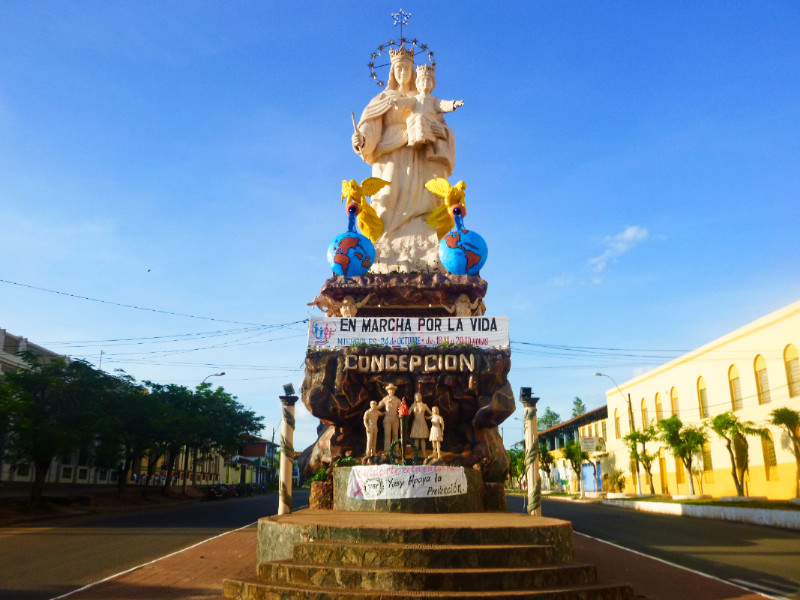 WAKING WELL AFTER dawn at Cerro Cora, nothing had totally dried but felt a little better than last night. The breeze was stirring the luminous sunlit leaves against a backdrop of tropical blue. It was still early, 8am, but already I could feel the heat building. By the time I’d packed away, I was soaking with sweat and sat in the cool 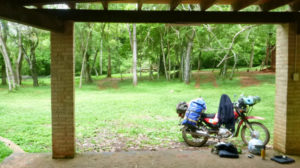 shade of a concrete picnic shelter that seemed to channel the breeze and create its own wind tunnel. Even so, I considered staying another night to bask in the peaceful nature of the place. There was electricity here but the water for the showers was off. The river flowed fast and brown and who knows how deep. It would be hot and what would I do all day apart from hide from mosquitos?

Route 5 continues straight and smooth. Most motorcycles coast down the hard shoulder. Riders without helmets tend to travel slower because the wind around the eyes and ears gets violent with speed. I travel on the main highway glancing in the mirrors to dive out of the way of any speeding traffic. Staying on the main highway also means less of a chance of a puncture from loose debris as the car tyres keep the road swept clean. Deep potholes appear every few kilometres, usually on the nearside wheel track, so vigilance is needed for self-preservation.

Police checkpoints are frequent too. Small squads of military looking personnel stationed around road cones and huts. I slow to a jogging pace and give a gringo wave but none of them bother me. I remind myself to hide the bulk of my cash just in case I get stopped further on by a ‘fishing’ officer.

The Paraguayan air thickens with humidity and comes to the boil. I stop to take off my fleece and ride in t-shirt and jeans but there is little improvement. I start to get hungry and had already passed the disappointing looking town of Yby Yau so pressed on to Horqueta. The sky blackens from the north and the temperature begins to plummet. I don my fleece and zip it up to my neck but it doesn’t stop me shivering. Rain looks and feels imminent as I reach Horqueta and turn right to follow the chaotic flow of motorcycles over the cobbles toward the centre looking for a Cafe and avoiding collisions at the same time.

Passing the central plaza, I hang a U-turn thinking I had spotted the only cafe in Town. Raindrops drive me quickly through the glass doors. Ice cream is all they have and the small saloon is packed with teens.

The vendor didn’t understand “Vanilla” so I settled for Mint. It was OK, I was out of the rain that seemed to stop as soon as I stepped through the door. Concepción was only 40km away but the clouds looked pregnant with storm. Checking the map, Hotel e Camping Quinta del Sol was only 7km away. I decided to head for that as an option and leave the decision whether I continued to Concepcion up to the Paraguayan gods. 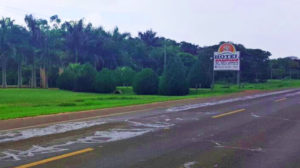 Back on Route 5, the misty drizzle clouded my visor, blew through my fleece and cooled me to my bones as I moved through the watery air. I stopped to check the map and found I’d already missed the giant sign at the entrance to Quinta del Sol by about a kilometre. I never like turning back but felt too cold to plough onto Concepción. I swung the bike around back to Quinta to call it a day. I couldn’t face the cold damp trip and then have to search for somewhere to stay. 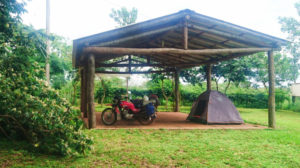 Feliciano showed me around the enormous grounds with well-spaced picnic shelters, a farm, two soccer pitches, pond and woods. I selected the large picnic shelter tucked privately away behind a large tree and pitch my tent inside. The air was still cold and damp. Mizzle drifted in under the shelter necessitating the rain fly over the inner which tends to make the air stuffy inside. even though it’s cold. I skipped the shower and had an early night as soon as it got dark.

I stayed for 5 nights, The site was a haven of tranquillity apart from the weekends when football games were followed by party time at the picnic shelter next to me. Quinta seemed a different reality to me. Alien, Planet insect to start with. Feeling them all the time either walking over my skin or flying into me. The small mosquitos would somehow still bite my knees through my jeans. the weather would be high thirties and then plummet within minutes under a stroboscopic electric sky. the sudden wind would cave the tent in, unsecured due to the concrete base being a barrier for using tent pegs. I removed the rain fly to allow the wind to pass through. It turned out a refreshing strategy and although some moisture would find its way in during a storm, not enough to really soak anything. 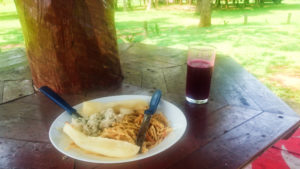 Communicating was difficult but Feliciano and Rita were really friendly and generous and brought me food, even if I was hidden away out of sight on my PC. Everyone felt like family and I could hardly tell who were staff and who were guests.

Leaving on the Saturday was hard only because of the late Friday night music booming out of a car converted into a PA system about 50 feet away. I felt tired already and I’d only just had breakfast. 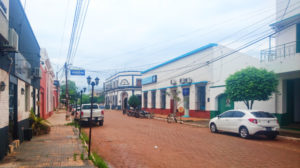 An unspectacular low rise town crept out of the horizon. I recognised the roundabout I’d just crossed by the map I’d checked earlier and I expected the place to be much more ‘City Centre’ like. Described as an old colonial town brought disappointment. Like a dilapidated cowboy town now paved over and the horses traded for scooters. There was traffic but not dense and it was frustratingly slow. No competing for position like most cities. The 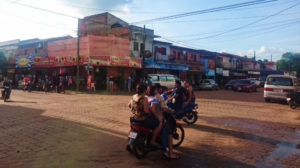 grid system made for hundreds of crossroad that had no give way signs so the speed of the traffic made sense for life preservation. The bravest went over first and it’s every man form himself. Eye contact is a weakness. Once established, they’ll continue across your path knowing you’ll brake. Use peripheral vision and look straight ahead and the traffic swerves around you like you’re a blind man. The traffic was dominated by scooter style motorcycles. Whole families on one, toddlers on laps, teen girls on others steering with one hand, texting with the other. 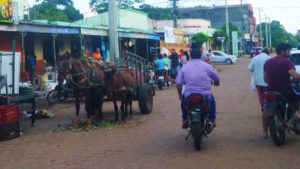 The city of Concepcion is the biggest small town I’d ever seen. Hexagon slabs give a smoother ride here than Corumba, Brazil but are rucked up and rugged in some places. some suburbs have only dirt road. The main routes keep their smooth and wide asphalt. 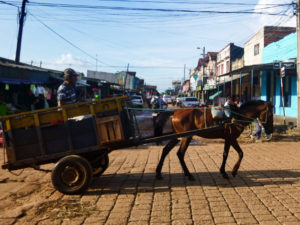 I made my way to Hostel Las Aguas., just off the main road but far enough to be away from the traffic noise. Ioverlander had it down as a camping hostel but I was denied that option and instead, took a bunk in the 5-bed Dorm and unloaded the bike stacking the luggage in one corner. Manuel speaks a little English and points out roughly where the centre is in relation to the port on the bank of the River Paraguay, carrying on eastwards to the mercado area. As far as attractions go, there is one museum but that’s closed at the weekend.

Setting off over the grid of the city in the warm morning air revealed not much to look at. Overgrown plazas, rutted cobbled streets, dirt tracks, small stores and family homes. 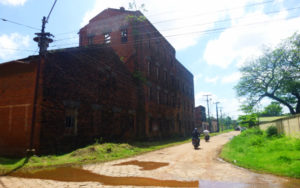 There’s no tourism in Concepcion. The port area on the river looked in ruins although it still shows signs of activity, small ferries taking people across the river. The abandoned commercial building hints at a city in decline but really it’s the effect of the developing national road system 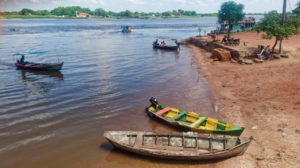 stealing the trade from the river.  The people here are cheerful and friendly and the modest looking town bustles with activity and commerce. 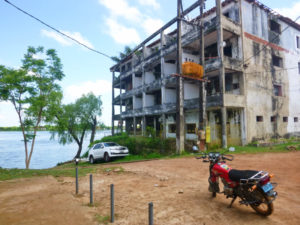 hardware store. I dipped in an bought a padlock to replace one lost in Bonito and an extension lead. Returning to my bike I became conscious that all the intersections look the same and I wasn’t sure how far I walked or even certain I was heading in the right direction. The sun was overhead and gave no clue on my orientation. Two blocks further, I spotted it. I had walked further than I thought and realised if I don’t note the street names of the intersection, I’d have big problems locating my bike in the thousands of others parked at hundreds of intersections just like this one. 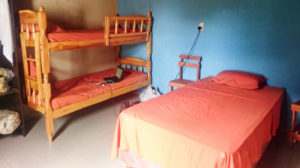 Flicking on the air conditioner and snuggling down on a soft mattress had been a forgotten luxury after the camping mat and concrete base of Quinta and despite the racket of fireworks and badly played brass band music somewhere out on the streets, celebrating the ousting of a corrupt local official, I slept soundly.

At dawn, the church bells told me what the time was, 6am then five minutes later, 6am again. In case you missed it the first time. The bell strikes a single beat for half past the hour. 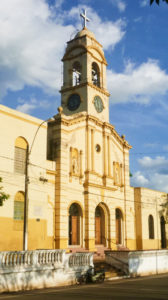 After the 9am peel and the snooze reminder 5 minutes later, I went down to breakfast to find a guest at breakfast. “Habla Ingles?” “Si.” A gringo journalist from New York, here in Concepción to research and write about the Chaco war with Bolivia. I asked him about the facilities and topology west of the River. He told me the same as Manuel yesterday. Nothing much there, even at Pozo Colorado. Some call it “the green hell,” the Chaco. Flat humid wetlands stretching to the western horizon with barely an elevation change of half a metre. Sure it would be interesting to see but not hundreds of kilometres of it.

My eyes now look east of the river and southwards to Asunción.

Relaxing in my room one afternoon, There’s a knock at the door. Manuel is there and an  old Englishman is behind him. “Hello, I heard there was an Englishman in Goncepcion arrived on a bike from Peru, I hope you don’t mind me interupting but I’m interested in your story…” His excitement was contagious and it was refreshing to speak with no  language barrier to someone from Swindon, only twenty or thirty miles from my old foreclosed home in Wiltshire.

John, is his name and he grew up in Paraguay in the 50s in one of the Bruderhof communities that settled in the Chaco with help from the Mennonites and later moved to Itacurubi del Rosario. I was as interested in his story as he was in mine. After a cup of tea and a good old fashioned chat, we exchanged WhatsApp numbers and promised to meet again… perhaps take a trip up the river on a supply boat slowly being killed off by the new roads… or perhaps stay a days at his home in the rustic village of Belen… 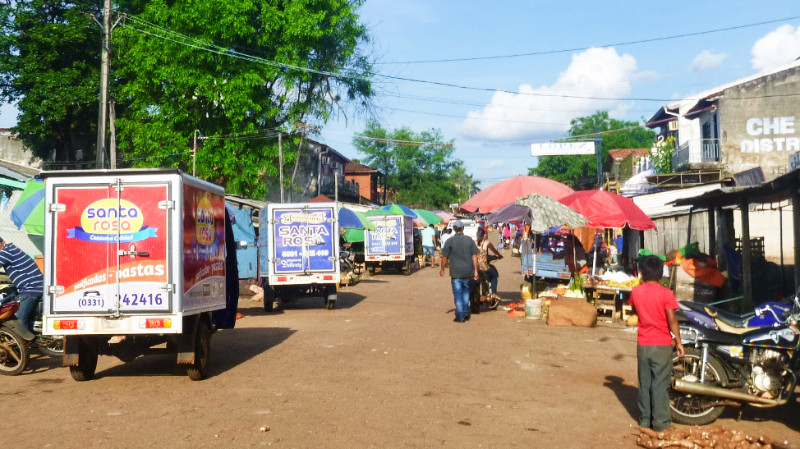 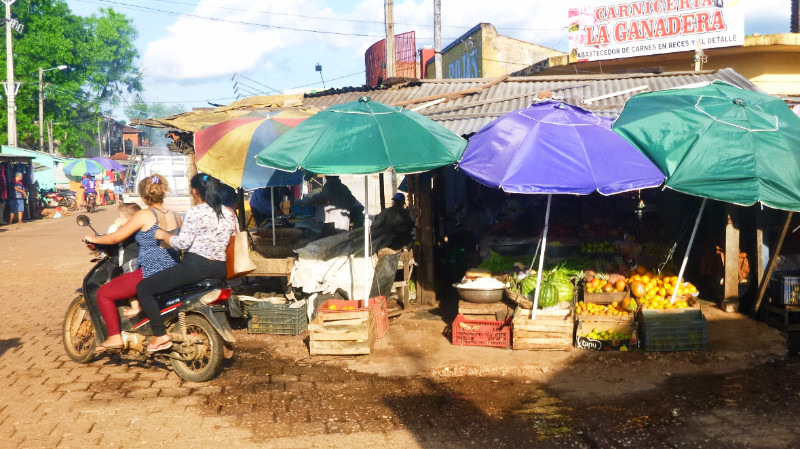 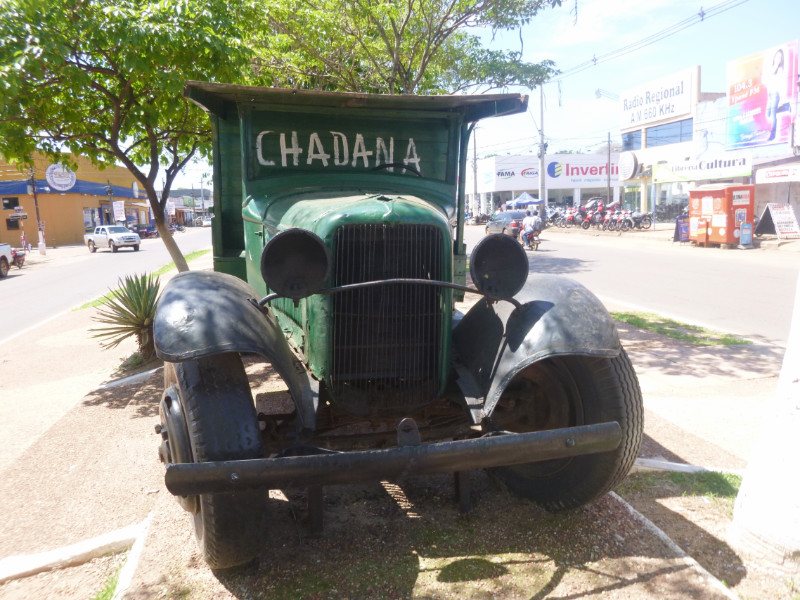