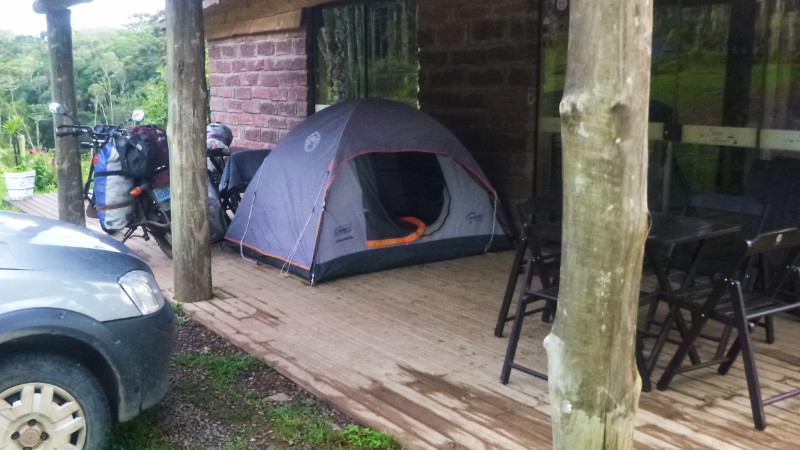 THE VERANDA OF Cafe Boca do Serra was an ideal haven for drying out a few items of clothing and would mean the tent would be dry to pack away in the morning too. The road was surprisingly busy during the night, trucks grinding their way up the stony hill but I slept well without minding too much. 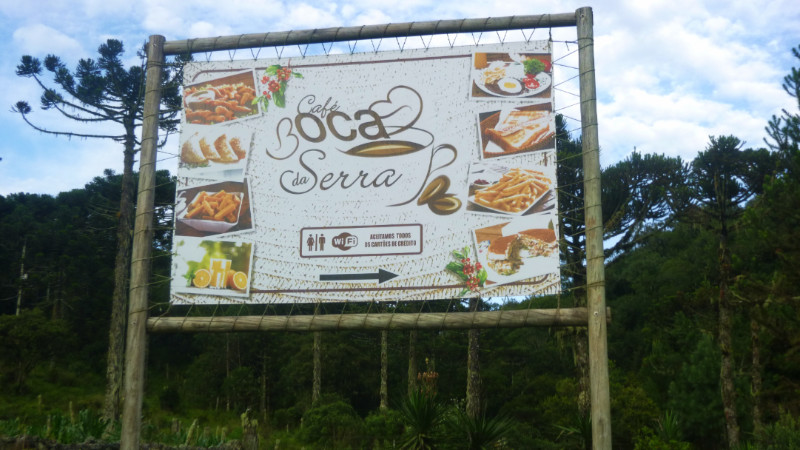 I was up and packed away before the cafe opened. I didn’t need to plot my route. I already knew the way back to Sao José dos Ausentes and after coffee and breakfast, I rattled over the stones back towards to check on the dog I had abandoned a few days ago. The way I had left her sat uncomfortably with me and I wanted to settle my mind more than anything else. 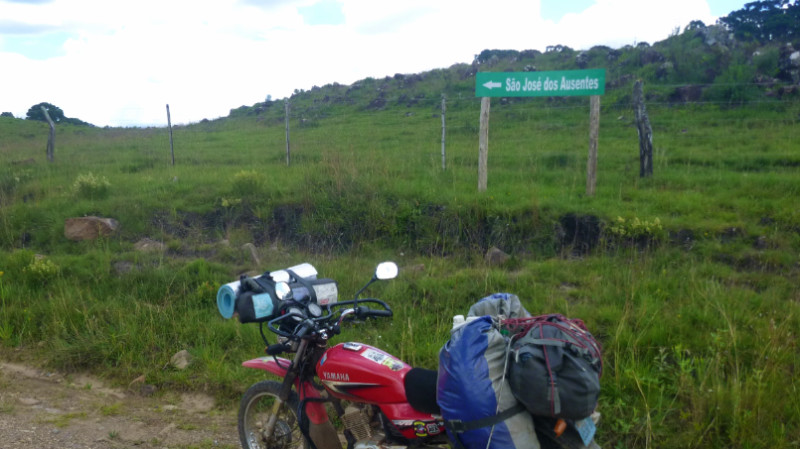 Along the dusty RS020, stones popping out from under my tyres, a group of offroad motorcyclists spread out over the track all dressed in bright motocross racing gear chatting amongst themselves. I stopped to say hello exchanging a few words in random broken languages. I bade them “Tchau” and continued north at a leisurely pace before they raced past ten minutes later, hare and tortoise fashion with me with my home on my back. I stopped briefly at where I camped in the pines where the dog originally appeared to see if she had returned but the place was deserted and quiet apart from the sound of my horn as I cruised down the track. No point in hanging around, I’d be back to camp here later anyway.

5km of Asphalt brought me back to the Sao José dosAusentes I thought I’d never see again and pulled into the petrol station to meet the Waving and cheering Rideout group again. they fussed over my Peru plate and jostled for a group photo around the bike. I should have taken a picture but I was keen to get down to the cafe to see if the dog was there. Saturday, the town was quiet. Ordering a coffee and sitting at a table I said: “No little dog today?” The proprietor recounted to her assistant about the dog that orbited me around the table three days ago but no mention of seeing it since.

I felt disappointed about not seeing how it turned out for her but it’s my own fault. Sao José is a fine little town full of friendly people, children and dogs. I think it’s likely she found a good home. Meanwhile, I was struggling to find WiFi or get money out of the ATM. The proprietor at Casa Cesa said the internet was down as I attempted to pay for my coffee with a series of rejected cards and advised to try again later. Cash was evaporating fast and my wallet becoming slim. 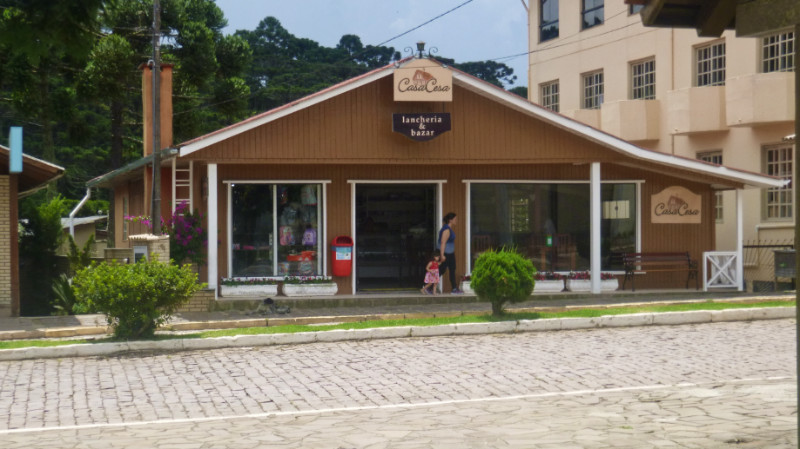 While I drank my coffee and enjoyed some cake, the afternoon clouds rolled in and unloaded their heavy burden via streaming silver rods that shattered themselves on the cobbles. I ordered another coffee and sipped its milky warmth while looking out of the window. After the rain stopped. I strapped on my helmet and swung the bike back up the hill against the streams of water bubbling down the edges of the street, onto the main road turning back to the woods. The air was cold through my fleece and more rain felt imminent from the grey sky. The rocky slope down to the woods looked perilously slick. I stopped the engine and rolled down the slope using the clutch as a rear brake so I could release my foot from the rear brake pedal and steady myself using both legs. I slid from side to side over the rocks but did not fall. My tyres cut a tell-tale trail in the mud along the track and into the woods. My tent was up just before a heavy shower. Returning to the trail to disguise my track I’d found the weather had wiped it for me and I unpacked what I needed for the night. 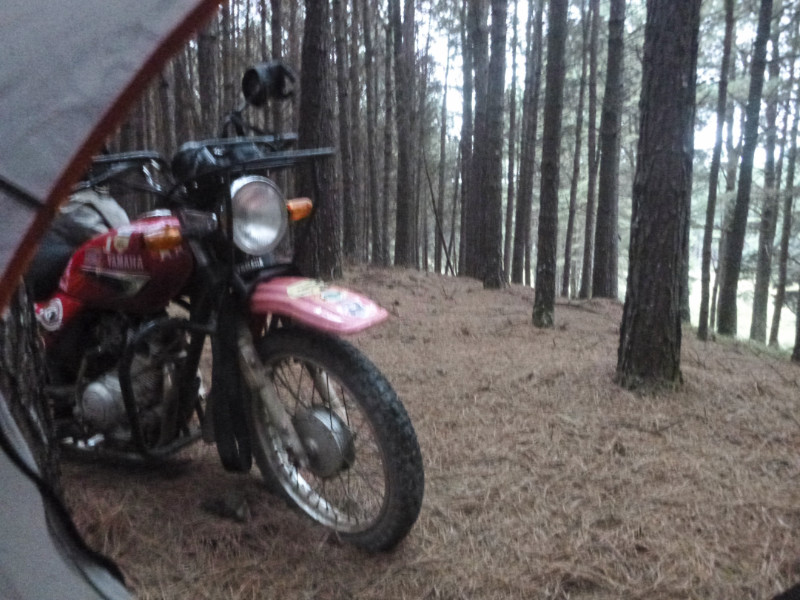 It rained for two whole days and nights. No phone, kindle, power or wifi. All I had were my thoughts and the rain fizzing on the tent between the drumming drips from the branches of the pines; the longest continuous spell of rain I’ve known in South America, cold too and I huddled down in my jacket and sleeping bag.

On the third day, The clouds crept away and the morning sun cast shadows on the tent through the trees. Let there be light, and hopefully warmth. My cheapo Chinese sleeping bag couldn’t hold its own against these cooler temperatures… I was fed up hanging around in these woods and quickly packed away to spend an afternoon at Casa Cesa in my new role as a pet detective. No sign of any dog. If fate meant us to meet again it would have happened by now but at least I had made peace with myself. My concern now was the depleted cash and inability to withdraw any from the ATMs. So I set off on the 45km trip to Bom Jesus to shift this financial logjam.

The 285 westward was fast and smooth asphalt with no traffic but moving through the bright clear afternoon caused the cool air to penetrate my clothes. A break in the cloud released some spears of sunlight to the ground and I stopped at the roadside for 5 minutes in the transient sunbeam to break from the cold and warm my soul. The next leg, short enough to ignore the cold saw me into the centre of Bom Jesus.

Cruising around the town, I discover a Bradesco Bank, almost with a halo of salvation around its physical presence. Feelings of elation accompanied me out through the glass door clutching a fistful of paper notes, relieved to have extracted some cash from its ATM. 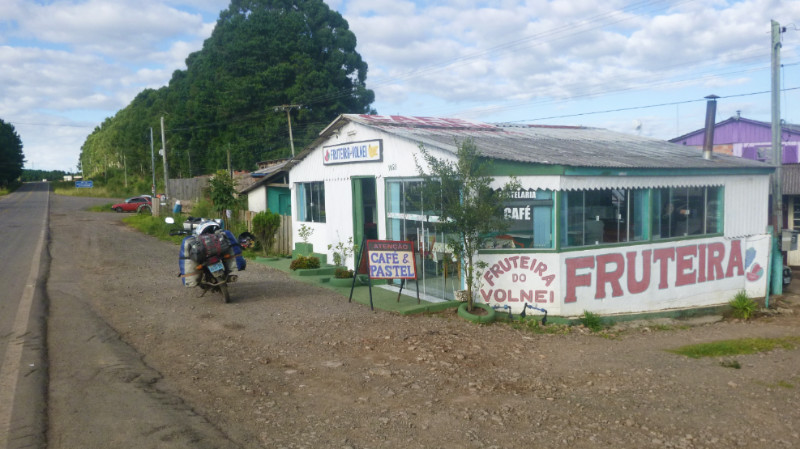 I set about looking for a new camping spot. Bom Jesus is busier than San José. No pitching opportunities before entering the town from the north and nothing after exiting the town to the south; more fences, less open land or accessible woods. I swung a U-turn back north and 2 km to Bom Jesus and stopped at a small cafe and asked for food. Either Cheese Pasty or Meat Pasty was as far as the menu extended washed down with some instant coffee. 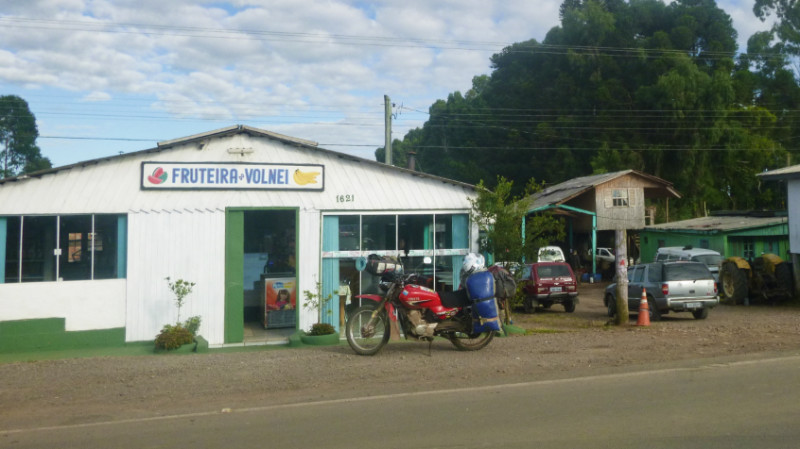 A man walked in after noticing my Peruvian plate and shook my hand, talking excitedly in Portuguese about his bike and his own travels. He lived not far away and worked in the town so I asked if he knew where I could camp. He said one moment and disappeared through the back door of the cafe. He returned telling me that the owner of the garage next door said I could sleep in his sheltered work-space and showed me an oily panel of wood on the earth floor. Perfect I said and set up the tent. The owner’s wife unlocked the bathroom for the night and locked up the main workshop before leaving me to my own devices. 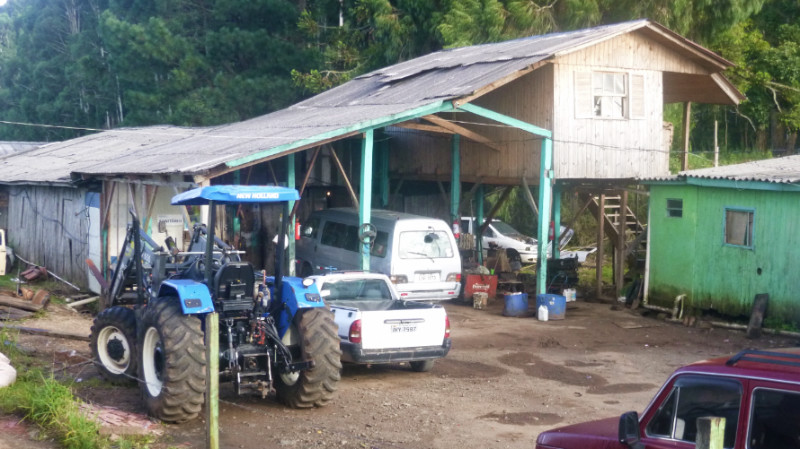 The wifi I had from the Cafe was still strong here and I had an electric socket within extension lead distance. The cold wind wafted the smell of engine oil and rattled the unsecured fabric of the tent due to the inability to use tent pegs. 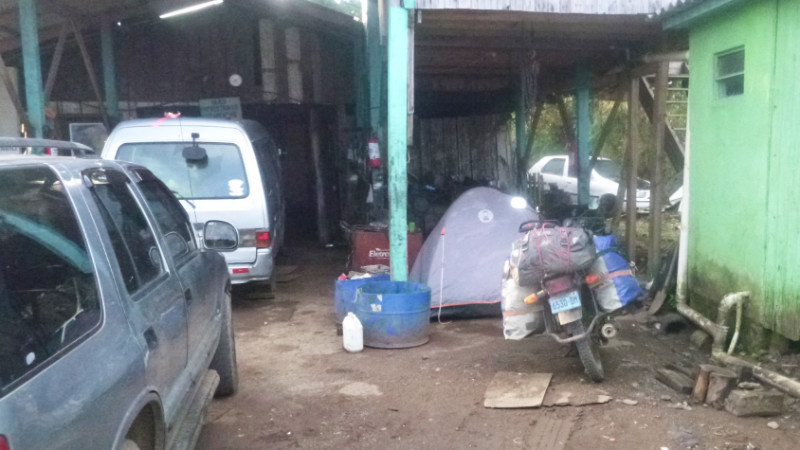 If I wasn’t inside, it might have blown away… 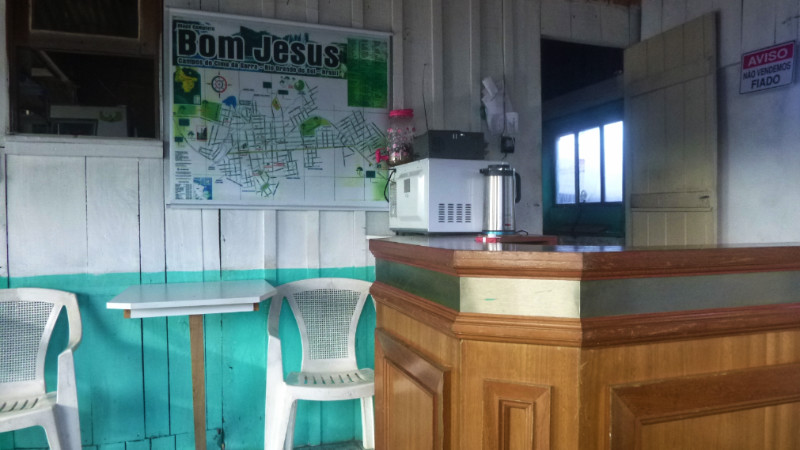 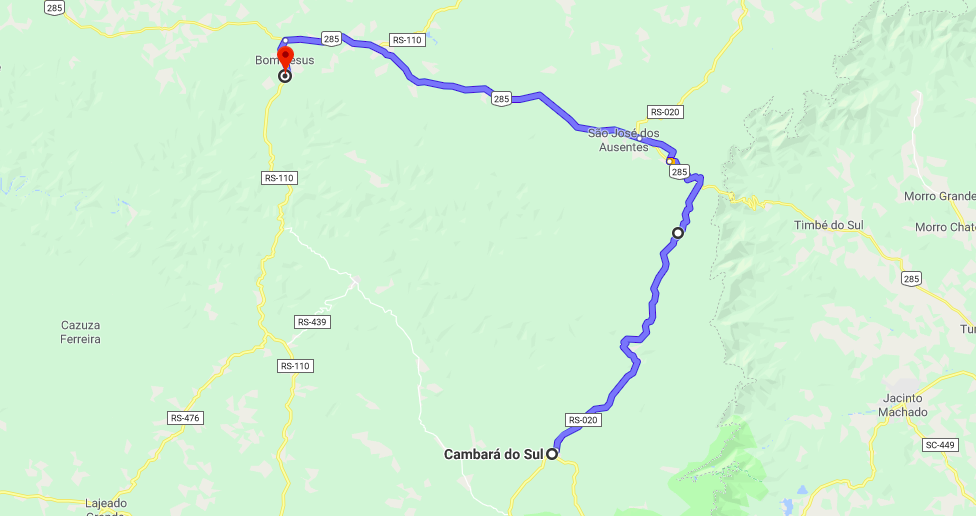