ON THE THIRD morning, I packed away, at Parque Manantial, and was away from Hohenau, through Obligado and Bella Vista northwards on the 250KM jaunt along Ruta 6. Within a couple of hours, black clouds closed in and I raced the storm to the next petrol station 3 km up the road and only losing the race by about 500 metres, enough to get wet but without getting soaked through, and sheltered under the canopy of the fuel station licking an ice cream over the twenty minutes of rain. 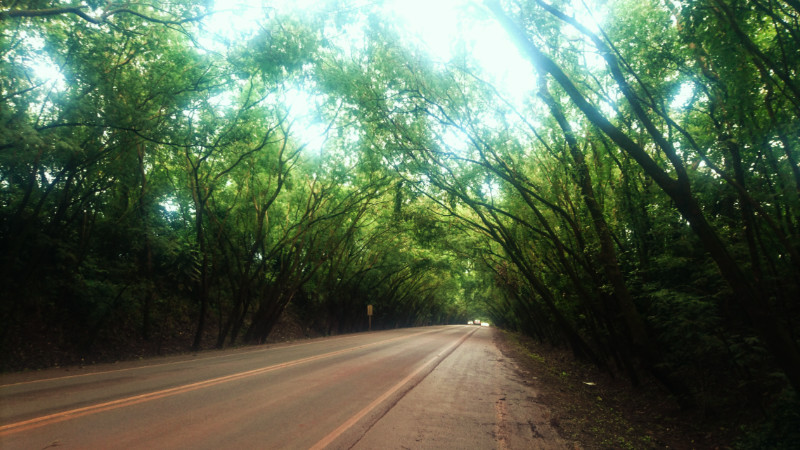 I resumed my journey, drying out in the cool post-storm air. Ruta 6 is fast and busy but not half as much as Ruta 7 running east into Cuidad del Este. High-speed dual-carriageway thick with trucks and buses. I could use another 20km/h to feel safer but don’t want to rev the engine that high, even if it could reach that speed.

It’s early evening as I settle into the last few kilometres down the dual carriageway toward Cuidad del Este. I get a thumbs up from a rider joining Ruta 7 from the slip-road and I give him a wave before he speeds away. 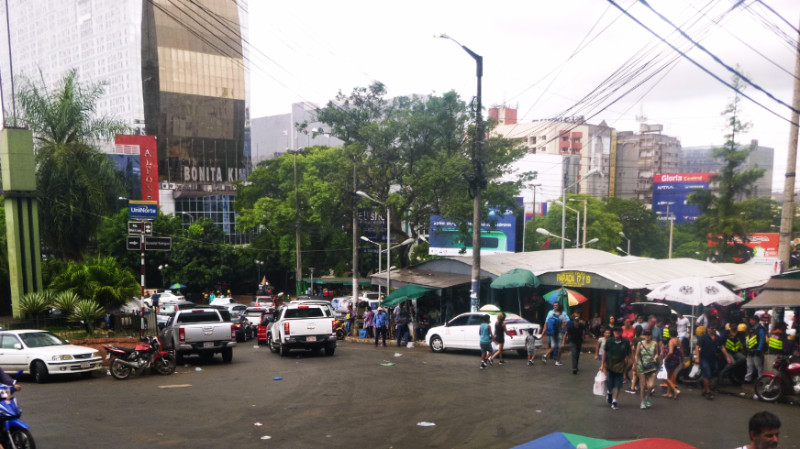 Entering the city, I take the service road with its speed humps so I can slow down and look around more. Ruta 7 ploughs on through the heart of the city and eventually over the Rio Parana bridge on the Brazilian border.

In the west, we have motorway junctions with elevated roundabouts and on off ramps. Not here. We are on the same plane. A roundabout with a dual carriageway bisecting it. Speedhumps regulate traffic so if you doze at the wheel, you’ll be launched into the air but not high enough to clear the crossing traffic. It’s all negotiated by trust, eyes open or closed. Give way to those braver than you or those you can see aren’t looking your way. 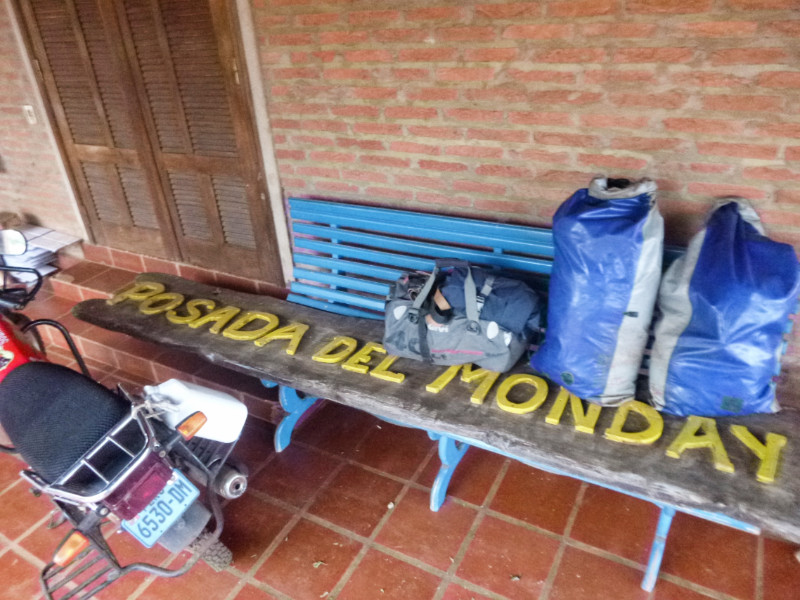 I find my way south through the city to Pousada Del Monday, counting the junctions on Maps.me as I go. Pousada del Monday is a farm on the suburban edge south of the city next to the Saltos del Monday park (Monday Falls.) Mario finds it hilarious that I say in English Monday means “Lunes.” It’s a Guarani name and not the day of the week. 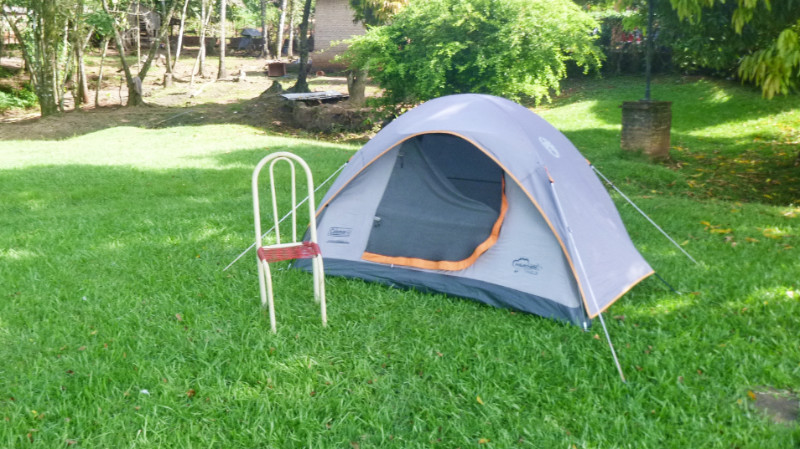 After pitching the tent, in the field, I stroll up the shop to buy a beer as a substitute for dinner and return. The deposit on the bottle is as much as the beer. therefore, you see no glass beer bottles littering the street… just plastic. There’s not a whisper of a breeze and my tent feels like a sauna so I wander across the field down to the picnic shelter to enjoy the beer while watching the sunset. Darkness slowly descends and I return to the tent and zip myself into the muggy interior. Saturday night music blares from over the treetops in the near distance. Fireworks pop and bang. Predictable, even though it’s only 29th December, it’s still Saturday night.

The noise and a rogue mosquito make for a long miserable night. When it wasn’t biting me it was whining in my ear.

Morning creeps around and I walk up the drive in anticipation towards a favourably reviewed vegetarian restaurant just up the road to find its under major refurbishment and closed for two weeks and I carry on past to drop off the bottle and collect my deposit.

If there was any doubt whether I should move on that morning, this tipped the balance. I decide to pack up and head up to the Tati Yupi refuge, a nature park above the Itaipu Dam. The plan B was a Christian Campsite at Hernandarias not far from there.

I dripped sweat packing away it was already so hot. I removed my fleece and put it on the chair next to the tent with my bike key on top of as I packed away. What could possibly go wrong, there was no-one about. I turned around to discover a cow chewing the sleeve of the fleece and, as I lurched toward it to grab it, it took off across the field with my fleece, dropping the key in the grass. The cow dropped the fleece in a small stream as it jumped across. I retrieved it and retraced my steps to find the key. I found it fairly easily but vowed to always keep the key clipped to my belt as I usually do. Somewhere else in the field lies the charge cable for the GoPro that was in the fleece pocket. 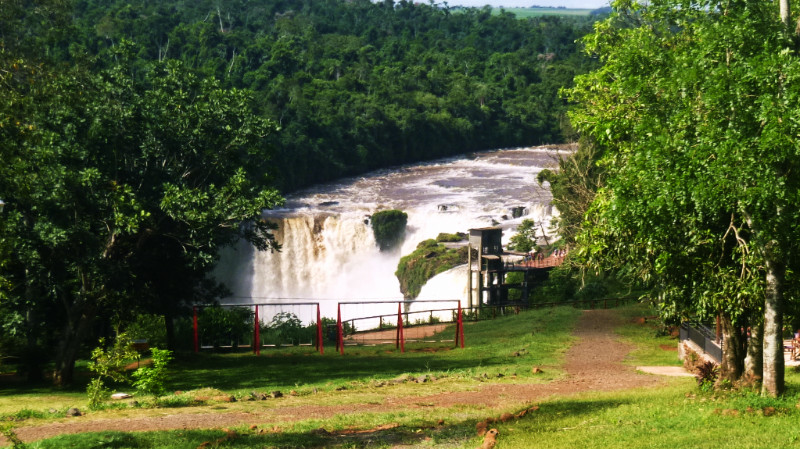 Pulling out of the gate, I ignore Saltos del Monday Park since foreigners are charged five times more than locals for entry, at $10US, and settle for a photograph of it from the road. I was hungry so the priority was to hunt for a cafe for breakfast that’s open on a Sunday.

I cruise northward to the City centre and end up taking a tour around it with still half an eye out for cafes, observing the bustle of busy glass-fronted malls surrounded by terraced market stalls along the streets, stacks of flattened cardboard boxes and the sound of packing tape being ripped off reels and wound around newly purchased electronics and old cardboard.

This is a mad place. Hoards of Brazilians flock across the border to save a fortune in Brazilian sales taxes. Paraguayans import cheap (and fake) goods from China to capitalise on the opportunity while customs officials are kept busy with documents and rubber stamps, panning for fees and penalties like gold prospectors.

Of course, not all goods are fake but it’s up to you to tell the difference and I’m sure you can find what you want if you know where to look. I needed a GoPro cable and came across a street vendor that finally had one. Yes, it fitted, No it didn’t work. It’s hard to tell whether there is any actual wire in it. 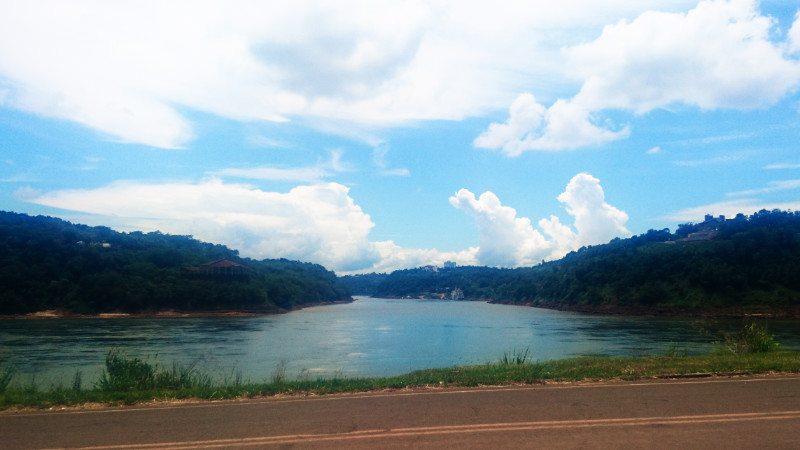 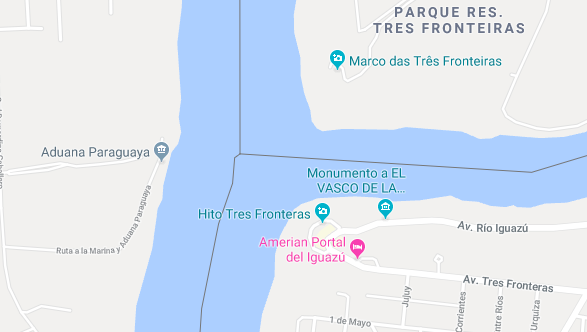 I rode back down to the Triple Frontera with Brazil. Argentina and Paraguay. I should have gone there first as it’s not far from Pousada del Monday but I had been thinking of food at the time and was even now still on the lookout. I’d read about the triple frontier years ago, about it being a hotbed of smuggling but I don’t see how unless the guards are in on it as you can see in all directions of the river. The way I see it, Ponta Pora and Pedro Juan Caballero is the place to go since there’s no river or fence separating the two countries.

The Triple Frontier was quiet. No cars were waiting on the ramp, no ferries were running and I looked east across the river at the Brazilian Viewpoint to the left and the Argentine Viewpoint to the right. The place was quiet enough for a camping spot but there’s nothing much to do, especially on a Sunday.

On the way back, I finally discovered the restaurant that seemed to be the only one open, busy with local customers (always a good sign) and nestling in the cheaper suburbs. I parked the bike under the awning of the closed store next door to keep it out of the searing heat of the midday sun.

Chicken and noodles with mandioca and a coke. Basic food, dirt cheap. Body refuelled, I returned to the city and explored the streets around the glass-fronted malls on the main roads again. Maybe I could get a new battery for my Hero3 GoPro. No, Hero4 is the oldest they cater for. I’m obsolete already. Not even a cheap Chinese knock-off to be had. 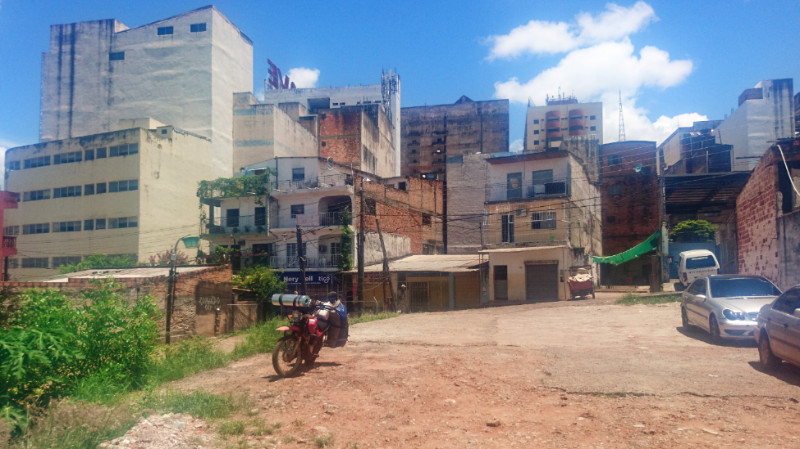 Round the back of the impressive high rise glass facades and flashing LED signs luring customers from among the shoals of shoppers, people in rags cook skewers of meat on homemade grills at the sides broken concrete streets while paper and plastic trash tumble in the breeze. A city with a facade as false as the brands it is peddling hiding the harsh lives that many people face. ‘Money makes the world go round’ so they say. It’s more like, the lack of money stops the world for those that don’t have it.

“Me? Just looking, not buying, thanks.” There is something very much “buyer beware” here and I can’t imagine any after-sales dispute being settled easily. Stores started closing at 4pm and the traffic soon built up to plug the only route back to Brazil, the single bridge across the Rio Parana to Foz do Iguazu.

The whole situation is crazy when you think about it. A whole ecology manufactured out of the artificial scarcity that bank-money creates. People trying to save their earnings from exploitative taxes in Brazil, people trying to make money from the differential of the price differential of local sales prices and the minuscule wage of Chinese workers and whatever’s left over from corporate profits. All this impacts quality and abundance. When I look around this continent, it is abundant in natural resources and manpower and it all seems ultimately choked by who controls the money. It’s a banker’s world and they are making a hash of it.

As the shutters start coming down, I turn west to the junction to the Supercarretera and it’s a straight run North past Itaipu to Tati Yupi. 17Km, straight on, you can’t miss it… 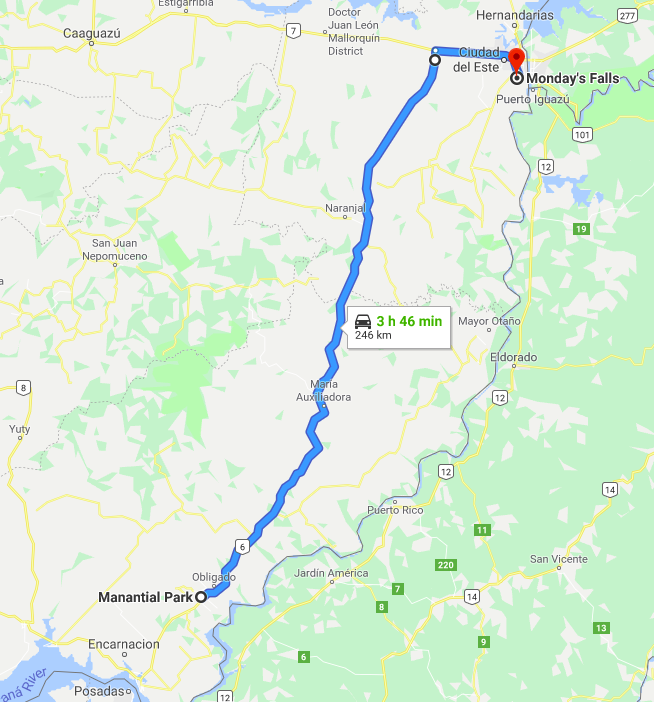