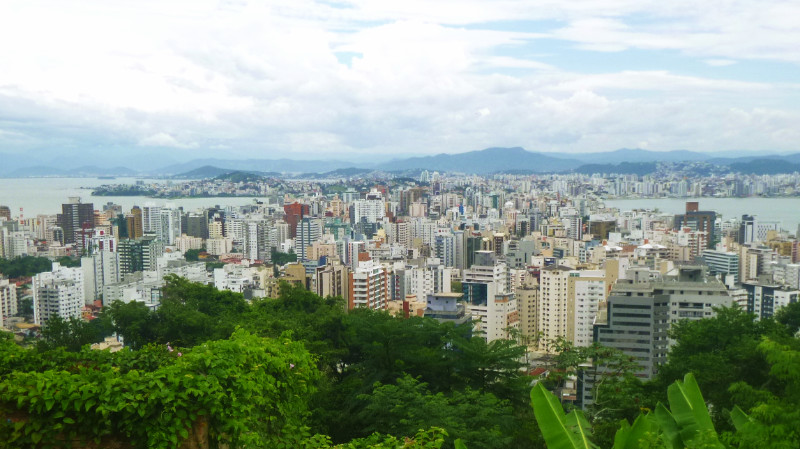 Florianopolis: a major waypoint in my consciousness ever since my meanderings took me east of La Paz in Bolivia nine months ago – changing my plans of returning to  Colombia via Peru and Ecuador.  The big picture in my imagination saw a straight line east across Bolivia and Brazil and then a sharp right southward. Of course, life doesn’t unfold along straight lines. Losing my wallet in Bonito, Brazil took a two-month bite out of my three-month passport stamp prompting me to duck into Paraguay and re-enter Brazil at Foz Do Iguazu three months later. sometimes the silver-linings are bigger than the clouds that bring them, such was the joy of my time in Paraguay 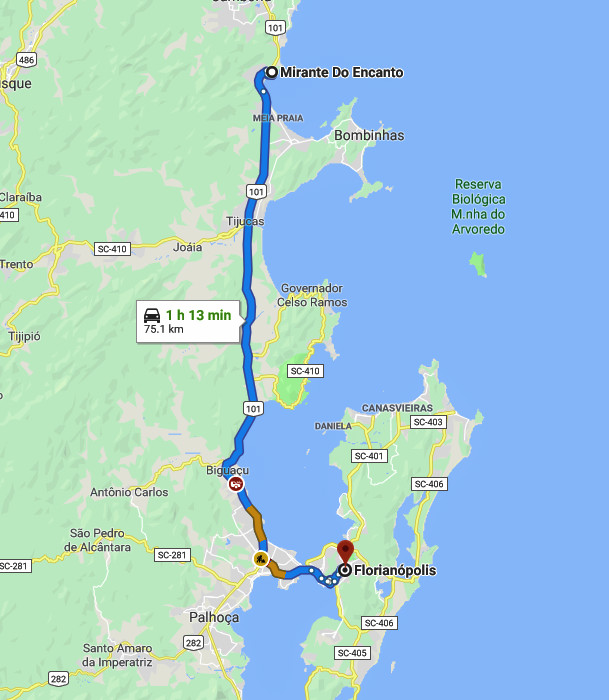 This waypoint looks and feels different close to. I’m already at the coast and Florianópolis now lies less than 50 km south. The first waypoint in the big plan, such as plans go. Porto Alegre would be the next, comparatively only just down the road.

Meanwhile, at brunch here on the edge of BR101 after a restful night in the woods near Mirante do Encanto, I Imagined that finding accommodation would be a greater challenge, with prices reflecting demand now that we were in the height of holiday season.

I could find no reasonably priced sites or hostels on the internet, even in the more downmarket town of San Jose on the mainland opposite Florianopolis. Ah well, I’d have to just live with the uncertainty for the day and see where I’d end up – just like yesterday.

Exiting the ramp of the busy BR101, I inserted myself along the queue along 282 across the bridge into Florianópolis. Across the bridge on the island, the traffic interchanges become fast and confusing. The city is to my left and the signs for “Centro” point right. Reading the signs full of unfamiliar Portuguese words and quickly change lane becomes the new challenge. The exit could be either side as roads loop around over and under bridges. These are dual carriageways with no u-turns. there’s no telling where a wrong turn would land me.

Florianópolis is a high rise city full of one-way streets and forbidden turnings. It makes exploration frustrating. I need some cash but have seen no banks as yet. This is an unpleasant experience in paradisical scenery: a picture perfect labyrinth… like I’m stuck in a video game.

On the northern coastal perimeter, the wide dual carriageway separates the city from the shore. A beautiful seafront promenade that’s difficult to stop and enjoy because of the fast flowing traffic. I turn right toward the city again hoping to find a road junction that will allow me back to the shore to cross to the opposite carriageway. No right turn. Onto the next traffic light. Right then left, and another right to the traffic lights and I finally unlock the side of the perimeter now that takes me anticlockwise toward the bridge and access to the south of the island, the interchanges shouldn’t be too bad since I’ve already traversed them, so I take a break at a seaside cafe on the promenade. 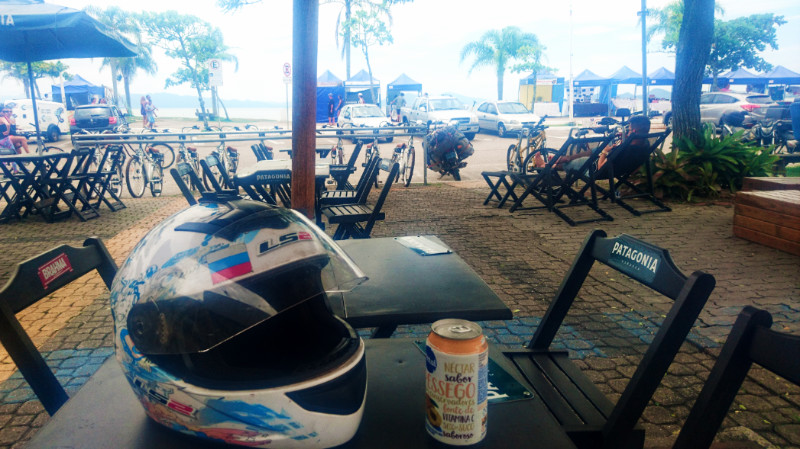 Checking the app on the phone, there is mention of a camping spot at a trailhead at the south of the island some 35km away. there was no rush. I finished a couple of ice cold juices and joined the perimeter to exit the city southwards. 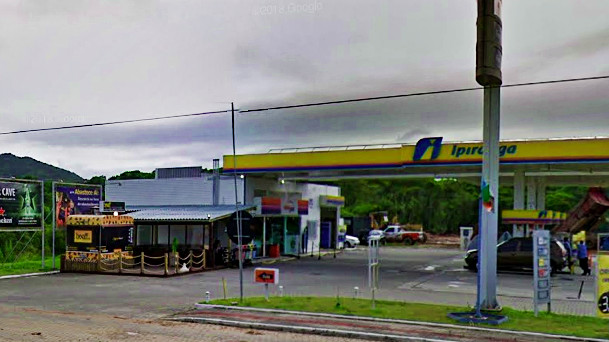 The interchange wasn’t too much of a problem and I  happily cruised south. I saw the squall early, sweeping over the southwestern mountains on the mainland and across the strait. The rain had already started to fall when I spotted a gas station up ahead and pulled into its lean-to cafe shelter to buy a coke and hide from the storm. The wind drove the lighter rain horizontally over the seats and tables and I sought out the least affected spot while the warmth and light of the day slowly blew away.

The wind and rain eased a little so I rode next door to wander around the Hypermarket for something to do, and use their WiFi for Skype calls home in the covered car park until the rain stopped.

After an hour, the rain still hadn’t stopped but it became light enough that the ride would be less of a sufferance than waiting for an uncertain period in a supermarket car park, and I splashed along the glossy black roads through the soggy grey air. 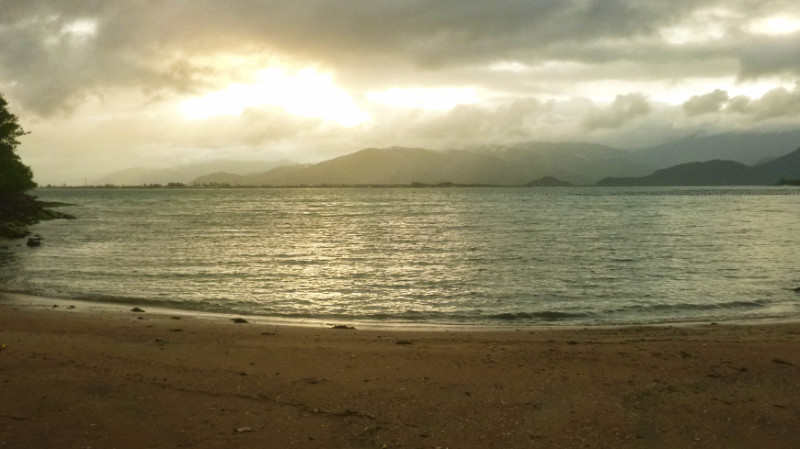 Continuing down the quiet undulating coast road under the cold grey sky, the weather along with the proximity of mainland Brazil across the strait reminded me of driving along the banks of loch ness in Scotland. It was hard to believe this was a strait and not an inland lake. 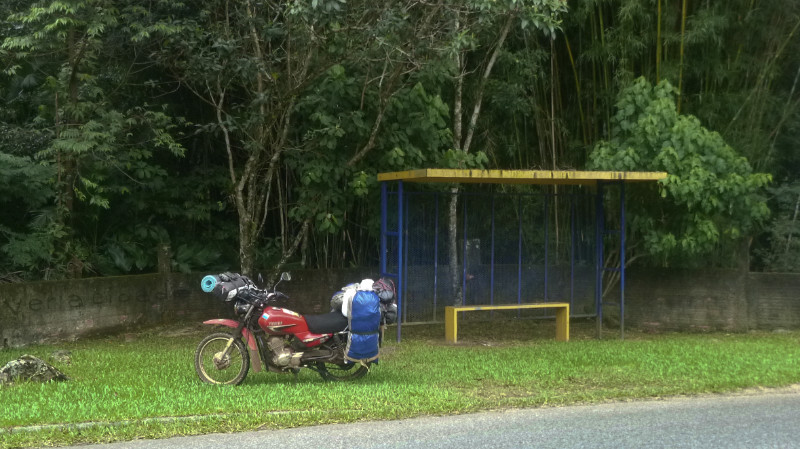 The rain never really stopped. The air was still heavy with water and sporadic outbreaks of drizzle drove me into bus shelters so I could thoroughly examine the sky upwind. Along the way, I discovered a “plan B tent-pitch” behind a bus shelter, overhung by tall bamboo trees, hinting at an element of seclusion. Not ideal, as there were houses across the street but felt adequately safe in case of an emergency.

The diverse trees lining the route gave a distinctive selection of fresh aromas in the moist air. I shivered my way the last 5km in my drizzle-transparent fleece before reaching the end of the road where the buses stop then return to the city This was a cul de sac with a small rotunda and small bus shelter. The place seemed deserted, a lane disappeared down to sleepy cottages down by the sea. It felt like a Cornish fishing village in midwinter at about 4pm just before dark. If there had been a cosy pub here, I’d be inside warming by the fireside, sipping a pint of ale…

I sat in the bus shelter surveying the scene for a few minutes. Opposite, a car park at the foot of a hill that hardly resembled the description on iOverlander.com but there was nowhere else remotely like it. A white Renault arrived and paused at a gate. A family peered through the windows at the stranger in the bus shelter next to the overloaded bike while an electronic pulse signalled a gate to slid open before the car spun some gravel under its wheels and climbed the drive to a hideaway lodge further up the hill in the woods. 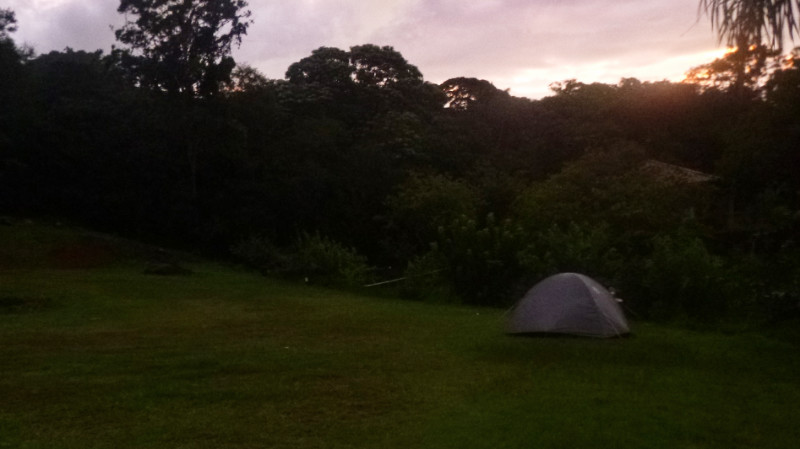 I walked across to the Car park. Three cars parked on the inclined plane of half gravel and grass. A wooden office shack on the far side from the road with Portuguese notices about litter and with directions to the banheiros was locked and silent. Behind the office were the banheiros. Above and beyond that, a level plateau of grass for further parking hosting only a ford transit minibus. Thumbs up, in my mind. I trotted back down the hill to retrieve the bike, crossed the lower incline of the car park and powered up the steep rocky rack to the level grassy plateau to pitch the tent in the fading daylight.

I felt relieved to get shelter. Even though the rain had stopped, the air still felt cold. Across the miniature valley in the trees, I could see the family that drove by in the Renault relaxing on their porch and gave them a wave before settling down for the night. I was damp from the drizzle but only in my top layer. Despite the colder evening, I felt warm in the still air of the tent’s interior.

Awakening to the sound of over-animated Portuguese chatter, I poke my head out of the tent, a dozen or so young people congregate around the Ford Transit, I’d noticed yesterday, in preparation for a hike. I might as well get up and pack and go… On the way out I meet the car park attendant and pay the 5R$ camping fee, about £1. what a find in the height of the season. Muito tranquilo and fully refreshed. 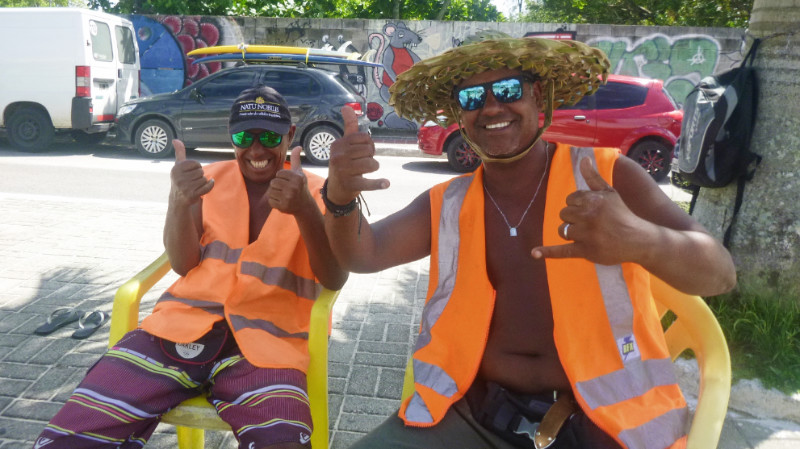 Sunday 20th January, replaying the reverse series of aromas of the trees as I retraced my journey north. The morning quickly warming up as I edge east toward Campeche on the Atlantic coast of the island. 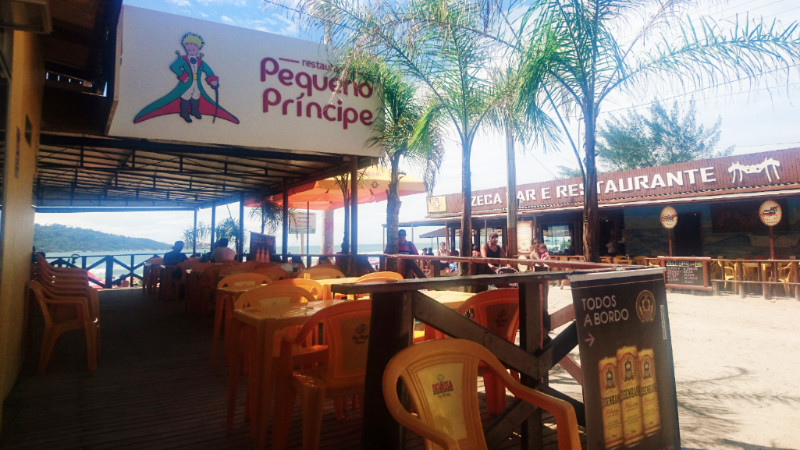 The beach at Campeche was already busy and I chatted with the parking attendants for a few minutes. I stayed just long enough to enjoy an Ice cream near the beach before riding off back to Florianopolis. To the north of the city, I heard is where the wealthy reside. There’d be nothing there for me so I return to the city itself, this time via Lagoa and Itacorubi. 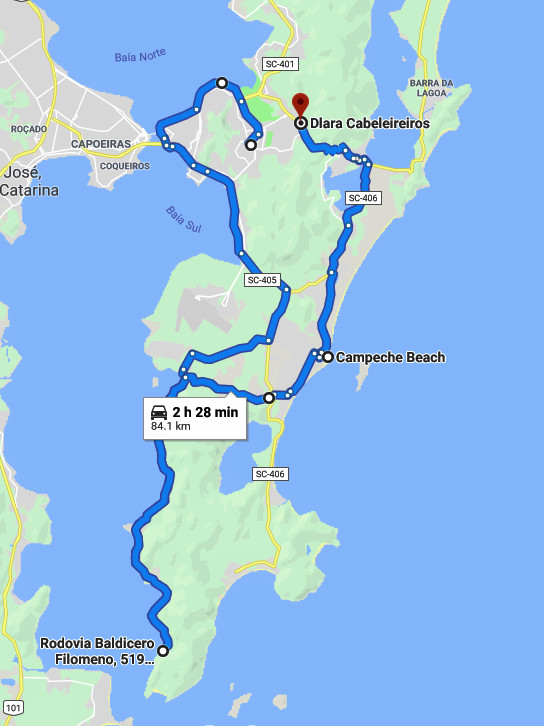 I was looking for a cafe and spotted one through the trees on a service road and backtracked to the junction. When I finally parked, it turned out to be a Gelateria, an ice cream shop. Despondent and about to ride off, I noticed that next door was the unassuming looking cafe D’lara. Electricity for the laptop, Wifi, Coffee and Cake. Perfect. Ralph spoke English well and Veronica baked moist, rich cakes. I bathed in the warmth of their company. Solitude helps me appreciate these moments along the way. 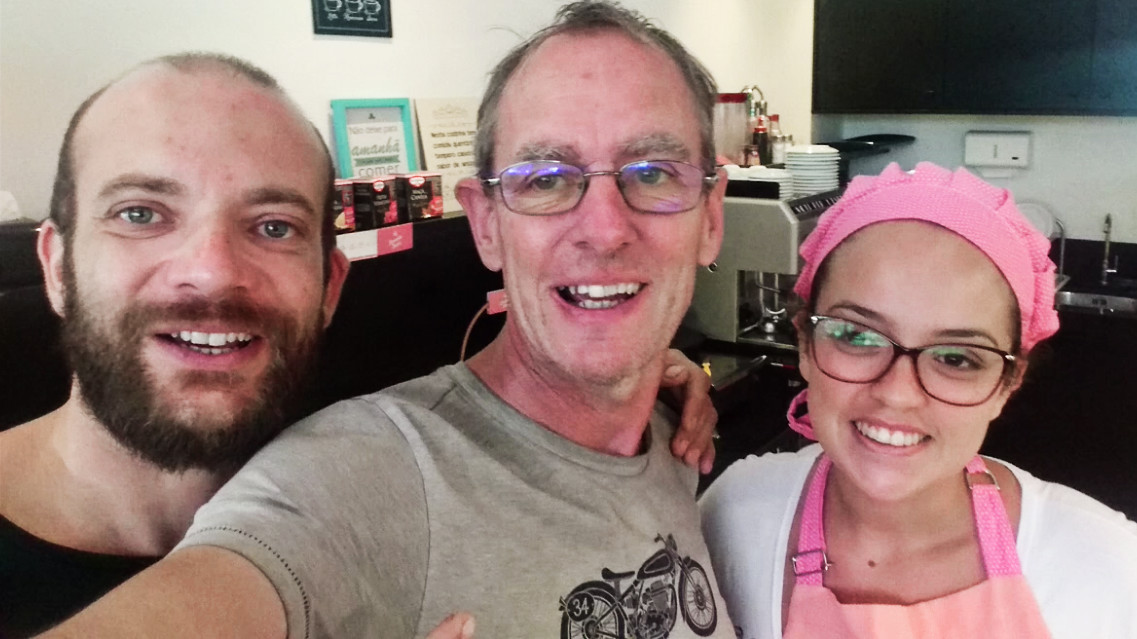 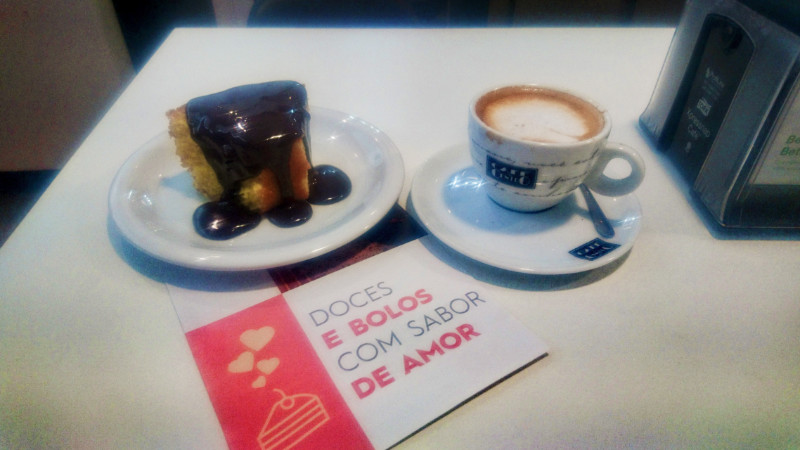 I needed cash and tried to navigate to the ATMs I’d found on internet maps. The junctions are complex and funnel around loops often in the opposite direction to where the location I want. the one-way system means negotiating driving around blocks and finding an elusive parking space is difficult even for a small motorcycle. Banco do Brasil had closed down, another ATM, I could find no trace of. I gave up and set off for the ATM in San Jose over the bridge and down the BR101. 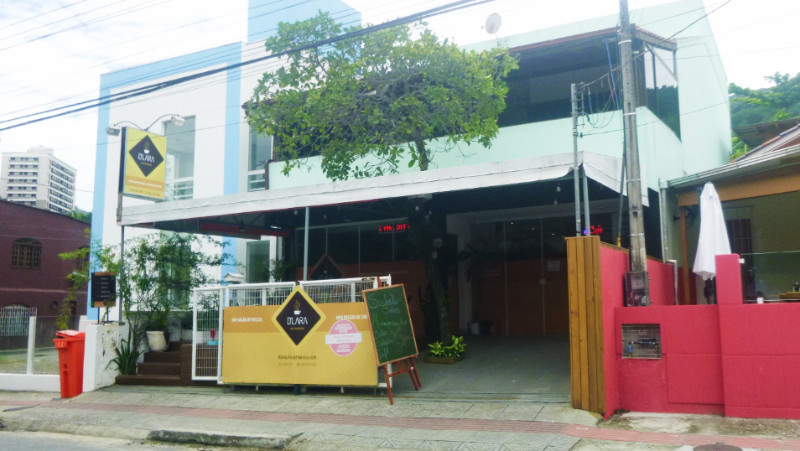 I found the ATM but it didn’t service foreign banks. Failed! Short of cash and getting late, I set off to find a campsite for the night and deal with the finances later.

90km to Alto Arroio and it’s a relief to get off the fast and furious BR101. Not far away,  I discover the campsite, Camping Do Quintino, next to a lagoon. A compact, leafy, rustic site. The woman who received me didn’t speak English but we managed to communicate well enough to check in. There was only one other camper, a Mercedes Sprinter, whereupon I met Paulo Lazier. He gave me a list of places to visit including Farol de Santa Marta, Serro Corvo Branco, Serra do Rio do Rastro, Cambara do Sul, Canela and Bento Goncalves. A big deviation from the monotonous BR101 hammering its way south along the coast… riding along the BR101 is no way to experience Brazil. It may be efficient but it has no soul… and soul is what I’m looking for. 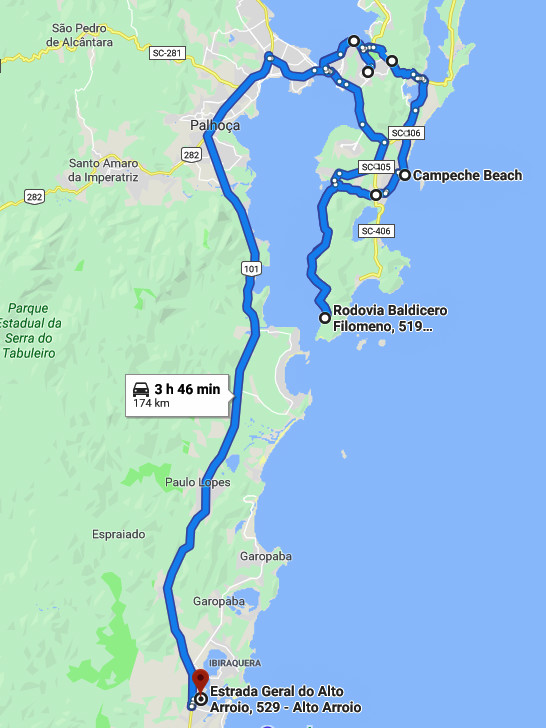