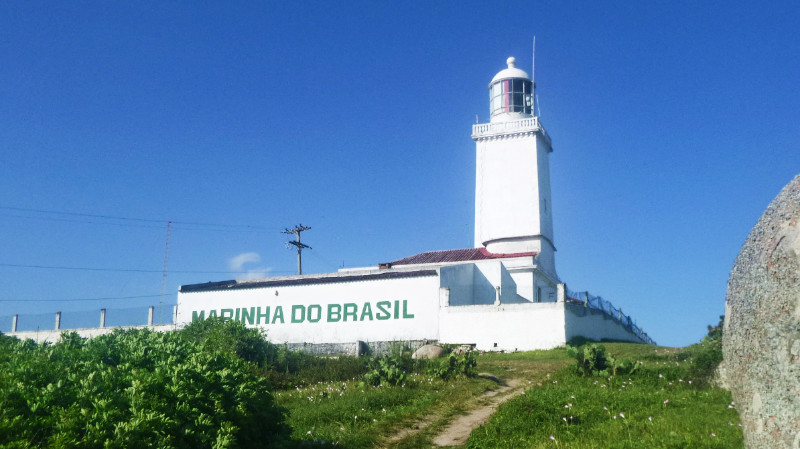 ALREADY  SWEATING AFTER packing away in the oppressive morning heat, I rolled out of the campsite and cruised along the sandy track wearing a t-shirt to the local beach thinking that was the location of the Santa Marta Lighthouse. 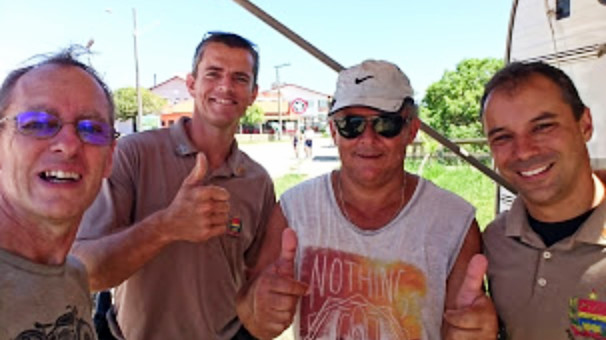 Parking up next to a small caravan that serves as a Police station, I stroll across the boardwalks to check the beaches. Nothing there so I return to the bike. Two Police officers with a couple of locals stand around the bike chatting. I join in best I can and the Police tell me the lighthouse is 40km further south near Laguna. Curious about my journey from Peru, I tell them about the whole trip from Turkey in a mixture of Portuguese, Spanish, English and mime. I bid them ‘ate logo’ and they offer a cold bottle of water. I’m already parched and down it in a dozen gulps before riding off.

Attempting to withdraw cash from the local supermarket, The check out girl pointed south to the Ferju retail outlet at Nova Brasilia. She was kind enough to write it on a piece of paper. Nova Brasilia is only 8km down the BR101 and the outlet is visible from the road only after the exit ramp. Luckily I had guessed the junction correctly and was already slowing down along the service road. Ferju is in a popular and busy retail park and a parking attendant directed me to squeeze my bike between two cars parked on a corner making a wedge-shaped space. Best of all, the cash machines were successful and I quickly became flush with cash again. 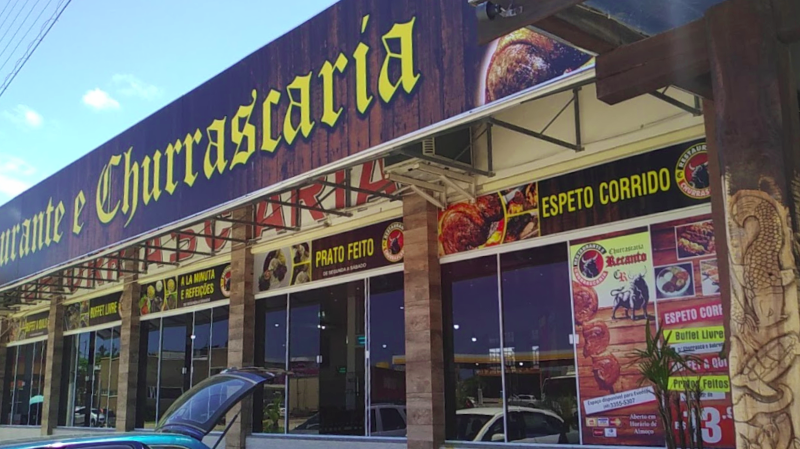 The restaurant tempted me inside but was too busy for my patience so I pulled into the Restaurante e Churrascaria Boi Preto not far down the BR101 just southwest of Imbituba where, according to the proprietor’s son, is the hometown of his friend Jorginho who plays for Chelsea. The buffet was delicious and cheap too. I’ve forgotten this guy’s name now but he said if I ever pass again, I can stay at his house. I can ask Jorginho what his name is if I see him kicking a ball about in the UK. 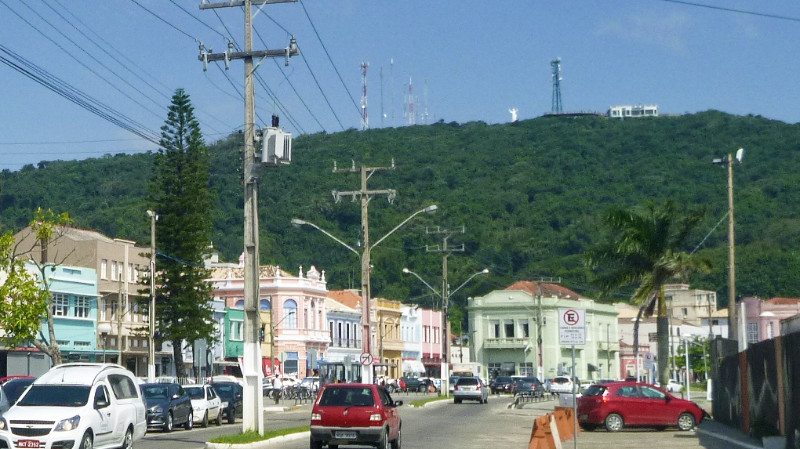 The turnoff to Laguna, 25km further down the BR101, came with the usual sense of relief and I could relax look around more while riding into Laguna without focussing so much on my mirrors. I spotted the Mirante Morro da Gloria on the skyline with its statue of Christ, arms in the air, and I weaved my way through the one-way system and up the hill. 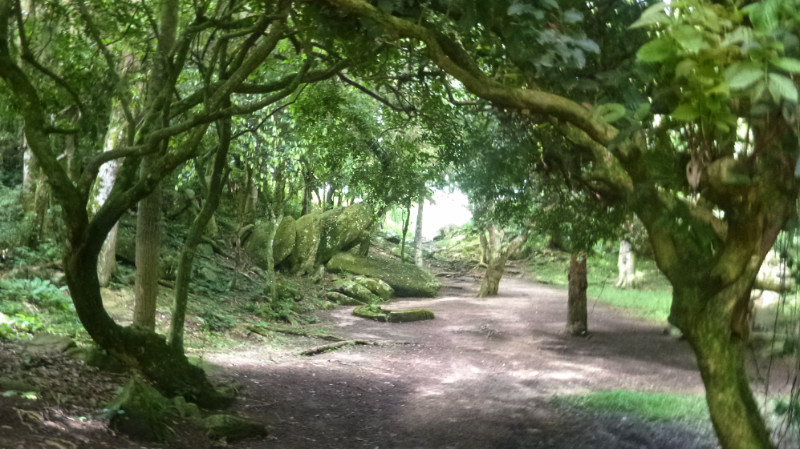 There’s a picnic area in some woods that looked good for camping but it was far too early to turn in. The statue attracts a regular flow of visitors. Sure, it was quiet but also too public. I could see a long way down the coast from here. Reminiscent of South Padre in Texas: a strip of land tapering off into the distance: Ocean one side, lagoon the other but I could see no lighthouse… 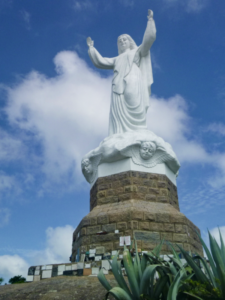 Following the signs to the Ferry, I pick up the tail of a bus winding through the streets toward the terminal. Arriving there, a ferry had already closed its gates ready to leave. Noticing the arrival of the bus it opens its gates again and I roll on as the passengers drift out of the bus and stroll onto the ferry.

Over the other side, the bank looks bare and rural, save for the queue of cars at the terminal waiting for the ferry back to Laguna. There are a few holiday chalets on the waterside but mainly, from here, it’s a straight road down the coast lined by farms on the right and dunes on the left. 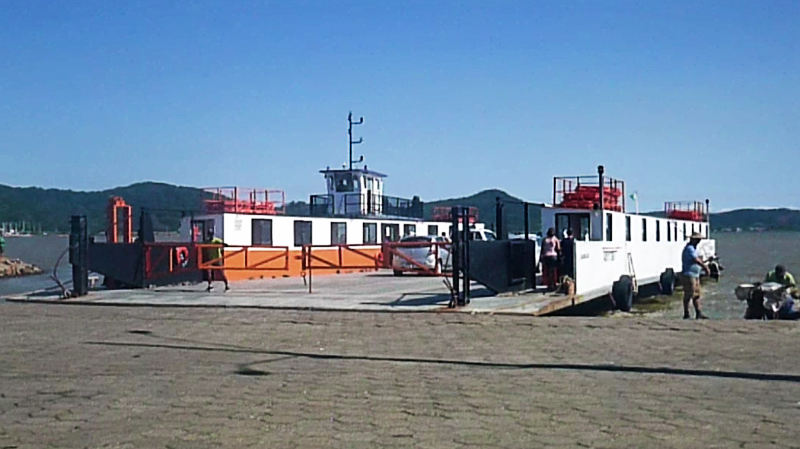 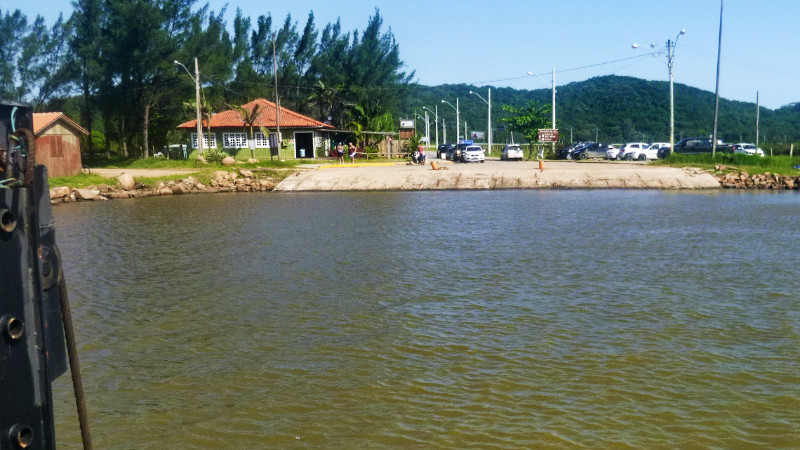 After a few kilometres, I spot the lighthouse in the distance and by the time I reach the junction, it seems like I’m well past it. enough to question whether I had missed it a few kilometres back. Santa Marta is a quaint little town huddled over a hilly promontory into the Atlantic, popular with tourists. It reminding me of an old Cornish fishing village back home. Coverack, perhaps on the Lizard peninsula.

I park the bike perpendicular to the curb to squeeze into the last metre of space between the line of parked cars and the red painted curb indicating the ‘no parking’ area at the entrance to the lighthouse then wander up the hill. 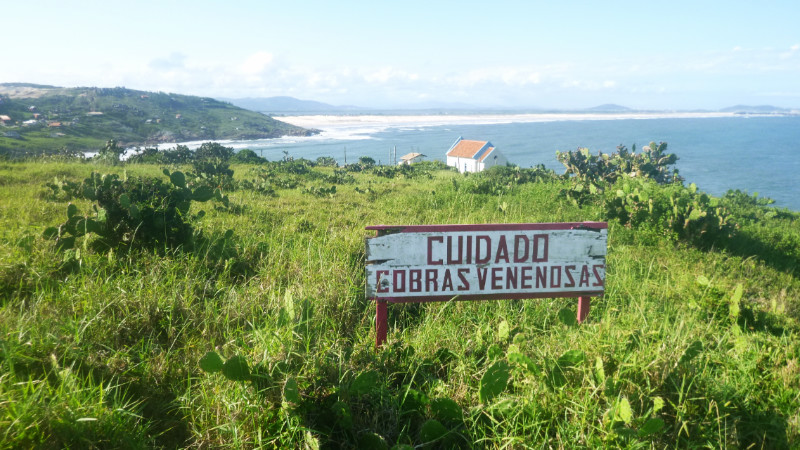 A sign warning of the danger of venomous snakes in the rough grass reminds me this isn’t Cornwall. This town looks compact and probably expensive for accommodation. Riding along the seafront up to the hiking trail, there is a small grassy car park scorched by a campfire. It’s perfectly level for a tent but quite exposed to public eyes so I decide to wait until dark and ride back down to the promenade and retreat to a cafe for a beer and WiFi. 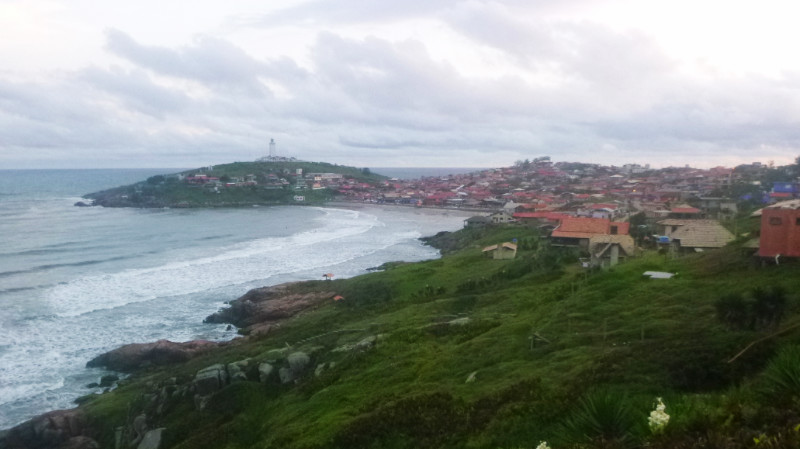 It’s amazing how one beer can affect your sense of balance. I felt totally sober but my balance wasn’t as sharp as normal and I carefully wobbled over the bumps and troughs along the track back to the trailhead at dusk to watch the waves and the day melt into night. 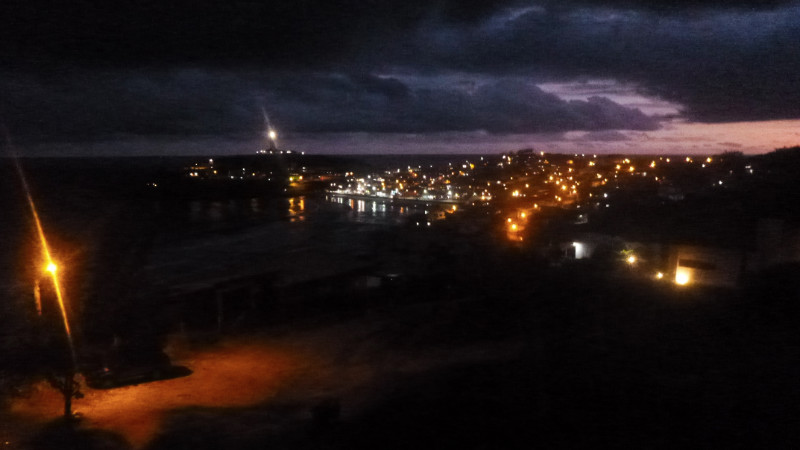 I walk back to the car park in the dark to pitch the tent. Along the way, I stumble down a hole in some thick weeds, instantly hoping there aren’t any snakes down there, as I scrabble out the other side, maybe tick off one of my nine lives on that one. While securing the poles, the beam of a flashlight sweeps across me, a local guy out jogging with his dogs. I just wave a greeting “Boa Noite” and he jogs along the cliff path out of sight. 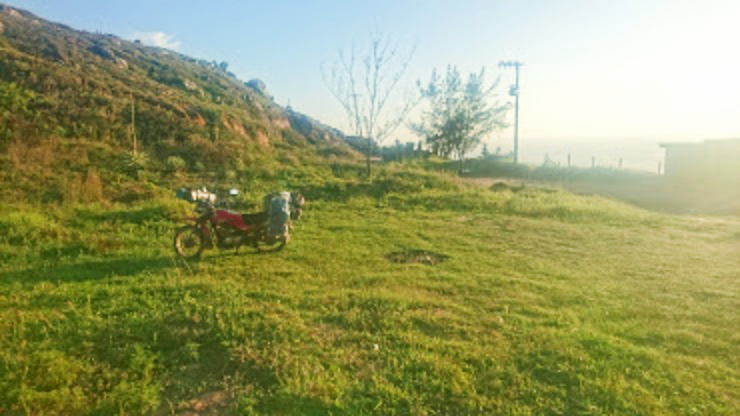 I struck camp at dawn for the purpose remaining invisible, the dew still fresh on the tent, while most people were still in bed. I had a peaceful and tranquil night here and being free of charge made my rest feel all the sweeter. I sat at the promenade in front of the closed cafe hoping for breakfast and used their wifi to check my route. 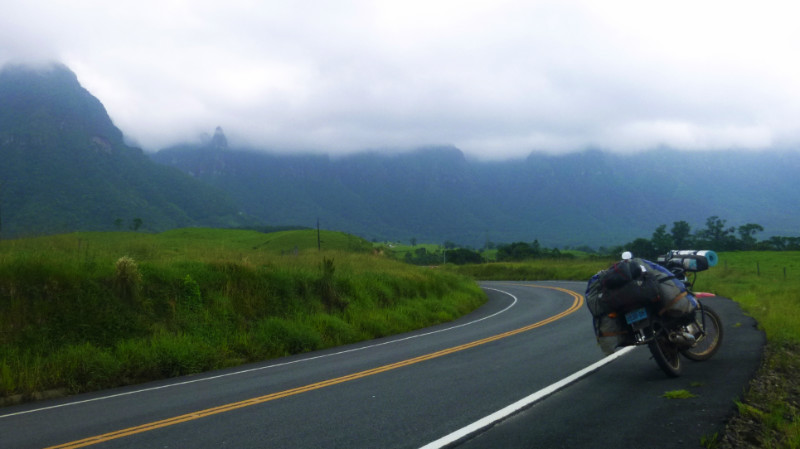 I could just as easily have breakfast in Tubarãu and took off toward Braço do Norte and then hopefully onto Serro do Corvo Branco. Google maps the SC370 down as closed, giving me a 100-mile diversion via Laura Muller. I ignored it and stopped at Tubarãu for WiFi and breakfast. I headed south from Santa Marta around the lagoon which meant riding north on the BR101 for a while. It felt like I was backtracking. 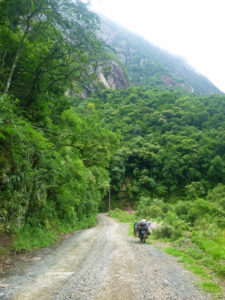 The SC370 out of Braço do Norte looks like virgin asphalt, smooth, wide and sweeping. My fuel gauge was half way which should be plenty for Urubici 70km away. The uphill incline tips the fuel to the back of the tank lowering the float sensor of the gauge at the front moving the needle to show near Empty and I start to wonder about fuel consumption on this persistent and winding incline. The misleading gauge taunts me, asking me why I  didn’t take a moment to pop into that fuel station in Braço do Norte. Distances certainly feel further on the ground than they look on a map. 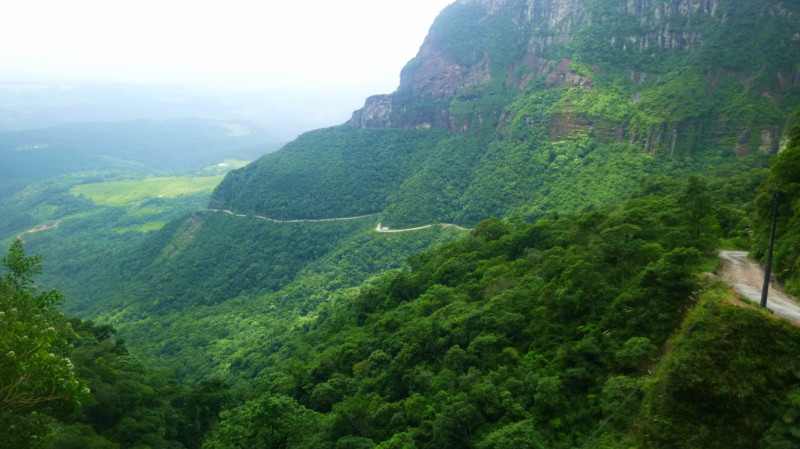 The absence of traffic also gets me wondering about Google’s alleged road closure. I’ve seen only two vehicles along this road, and I’m riding one of them. It’s not worth thinking about as I’m already committed. Rounding a bend, I see my lane has collapsed down the hillside. A great chunk about seven metres long like a great monster has taken a giant bite out of the road as far as the centre line. The hazard is taped off across metal rods and I swing over to the opposite lane to keep my momentum up the hill. The SC370 is a motorcyclists dream of smooth dry sweeping curves through alpine-like scenery – until suddenly it isn’t… 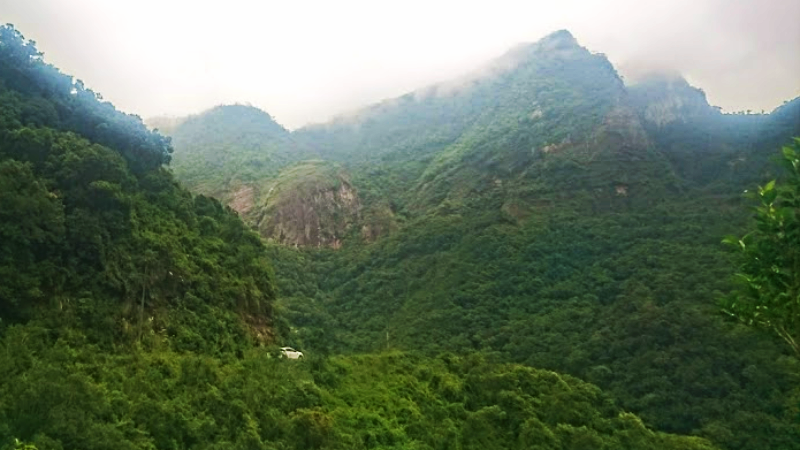 Up ahead is a Tolkien-like landscape and the SC370 becomes single lane unpaved track as If I’d strayed through a farm gate without noticing. The difference is enough for me to stop and check behind me and interrogate the GPS. There’s nothing to suggest I’d made a wrong turning. Checking Google street view later clarifies things. the images from 2011 have the SC370 as a dirt track so the upgrade to immaculate asphalt is very recent and ignore the difficulties of the mountain pass. 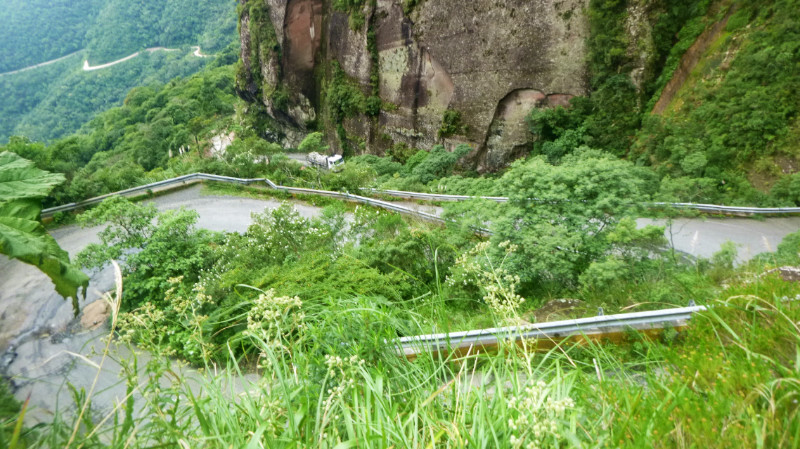 In the distance, a white car becomes visible on the side of a mountain and disappears behind the vegetation again. The track continues up the mountainsides in the style of Peru and Bolivia and soon I arrive at a series of hairpins and stop to get the GoPro out… just in time for the last bend. I park at the top to admire the view back across the gorge and the cleft where the road crosses the peak behind me. I see a truck with pallets of bricks grinding its way up the lane. Below me, it disappears from view but hear it change down a gear for a steep corner followed by a loud metallic rumble. When he reappears, one of the pallets is a heap of rubble on the back of his truck and the truck continues the climb and crawls past the last turn past me over the peak. 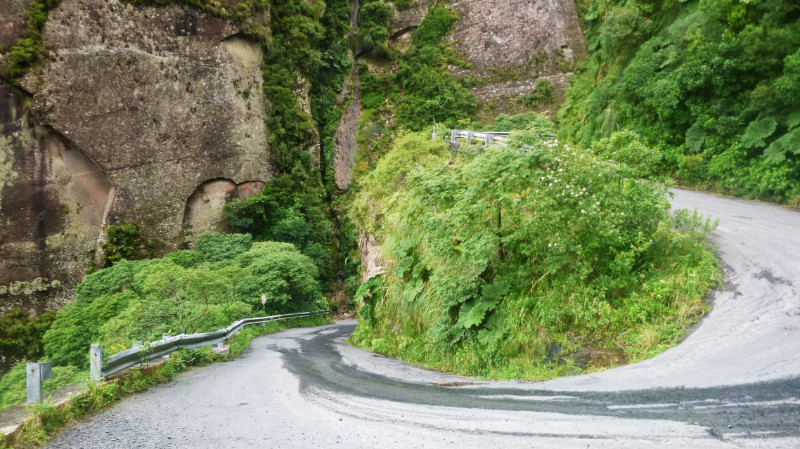 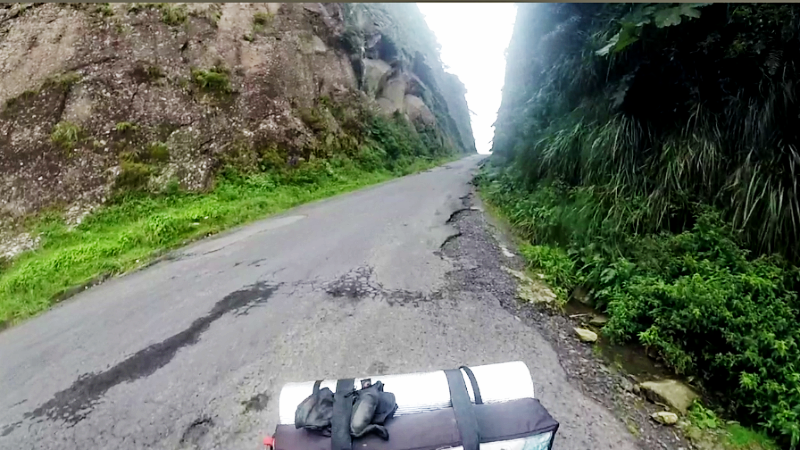 After a few moments, I follow over the peak, my mind is at ease. I coast down the wide gravel track on a closed throttle and the fuel sensor rises on the fuel flowing to the front of the tank and the gauge settles at a quarter. Coasting downhill uses almost no fuel but  Maps.me puts a fuel station 30km away and I rejoin immaculate asphalt gently cruise along the sunlit valley toward Urubici, ignoring the tempting detours to morros and waterfalls. 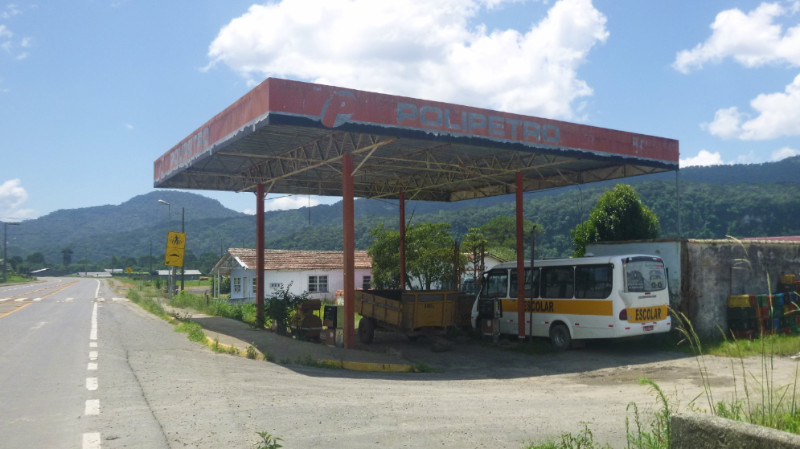 I arrive at the expected fuel station only to find a rusting canopy sheltering an old bus and wrecked fuel pumps. Like a scene out of a John Steinbeck novel. The Gas Station of Wrath. Thankful for not deviating to the viewpoints, I continue to the BR station 9km further on. Snacks, drink and WiFi keep me there a good hour revising my plans. Too early for retiring for the day, I browse the seven or eight waterfalls on maps.me not far away, most of which come back as inaccessible. There’s one that is 28km away and I decide to check it out, picturing myself enjoying a refreshing natural shower and perhaps camping for the night in an Eden-like paradise… 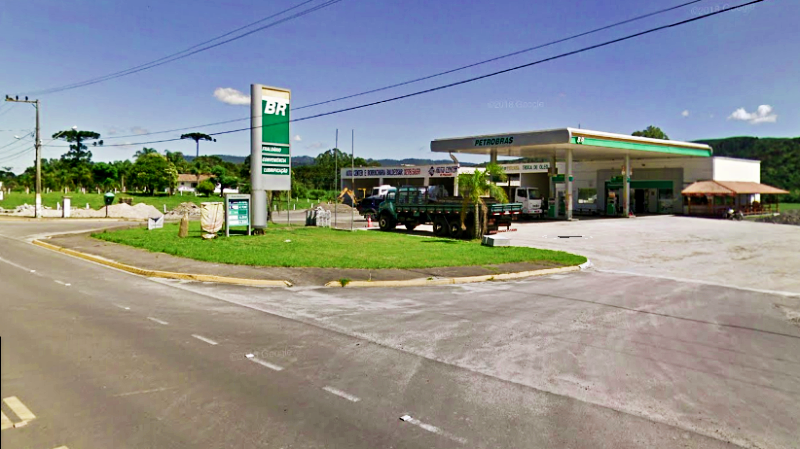 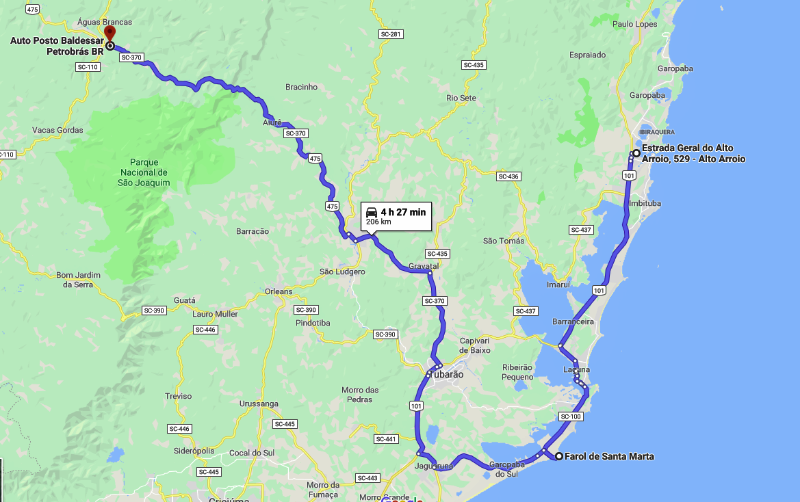