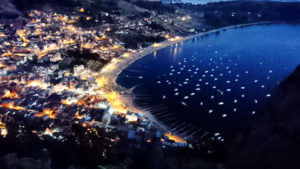 3AM, Cold enough to wake the Zombie White-walkers of Game of Thrones. The fleece blankets had slipped off the Teflon-slick polyester sleeping bag and needed constant readjustment to maximise heat retention.

The jacket I had been using as a pillow was now donned and zipped up inside the sleeping bag for extra insulation and arms deployed as alternating headrests and switched as they became numb. I dozed on and off listening to the waves gently calm and become quieter in the stillness of the night. 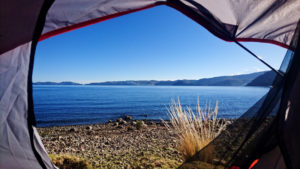 I awoke before sunrise, cheered to see the shadow of Senor Yamaha’s front wheel and mudguard cast on the tent wall. If not yet warm, I could feel the morning chill receding. I nestled down for an extra hour or two’s bone-warming sleep. 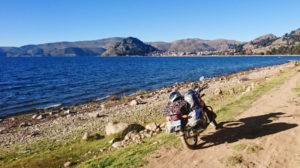 This time of year, the night temperature drops to between 2 and -2C. Back in the UK, Everything would be dripping with condensation. Not here, I couldn’t even see the mist of my breath. Everything felt as dry as it had been in the daytime. I squatted at the waterside with my toothbrush, unsteady over cricket ball sized pebbles and football sized boulders. The water was like liquid glass, completely clear, sparkling in the bright Andean sun. It tasted like spring water as I washed and cleaned my teeth on the sunlit beach. I expected the water to be icy cold but it was about the same as the sea in the UK but of course without the salt. Plastic bottles and litter lined the shore, as bad as anywhere I’ve seen here, even along the roadsides. I picked a few bits up, maintaining my policy of leaving a place better than I found it but it made little visual impact.

I wasn’t really hungry so I relaxed around the tent for a couple of hours before packing away and bucking and weaving the bike along the shoreline towards the town in search of a hostel, I’d need my fix of warmth, electricity, and WiFi for catching up on things tonight. Frankly, blogging wasn’t working as a portable income but I still feel compelled to keep it going: a mission independent of finance. It’s work, but not as we know it. 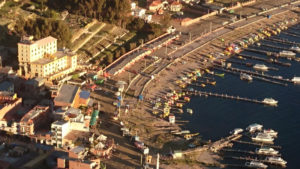 I rolled into Hostel Gabriel at Avenue 6 de Agosto. Saloman speaks as much English as I speak Spanish and between us we communicate quite well. He gives my bike a helping push up the high kerb and the bike idles into the lobby. The tarrif is 30BOB (£3.36) a night, for a shared room or 40Bop for a private. My shared room up on the first floor has two beds and there is no sign of anyone else here. For my 5 night stay, I have the ‘shared’ room to myself.

There are two issues with camping. One, at this altitude I need an arctic grade sleeping bag. Two, I need a regular source of electricity in order to keep up to date with my reports.

The curtained window in my room faces out to the hall which facilitates the walkway to the other rooms as well as a communal area. Its transparent plastic roof provides a warm area for the day I saw no one else when I was using it. Almost like I had an apartment to myself. 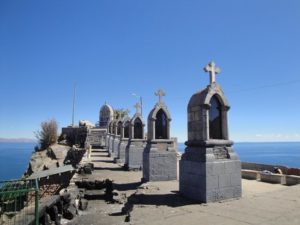 Out front and squinting up at the peak of Cerro Calvario, the crosses of the monuments give the impression of a cemetery: boot hill would be my nickname for it. The short but steep climb takes probably twenty minutes to half an hour up irregular stone steps. The altitude challenges the lungs. The intention is to take some pictures of the sunset over the lake but ignorance of the fact that Bolivia’s time zone is an hour ahead of Peru puts me an hour too early and a leisurely hour and a half is spent at the summit in meditation and contemplation while the sun slowly drags its warmth and light below the horizon. 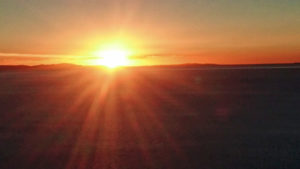 Down the Avenue toward the lake on the left is a cafe called El Condor and the Eagle. A fascinating Irish cafe run By Don, from Ireland and his Bolivian wife. He makes his own bread which makes for an irresistible breakfast sandwich. Don is full of local information and gives me tips on local bureaucracy, residency, La Paz as well as Isla Del Sol. There is a stack of handwritten notebooks where customers are invited to share their wisdom, experiences, favourite books, poems and song lyrics. It becomes the ideal office for planning the day… 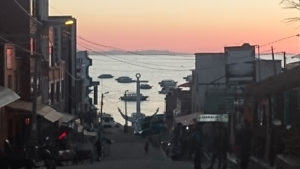 Closing the door behind me entering El Condor and the Eagle, I assume I’m the first customer of the day since they open at 7 and it’s still well before 8. Don, explains a bit about the blockade at the northern part of the island. Which was a blow, as I had planned to land at the north port and hike the ridge path to the south. Not currently possible. Something to do with the inland community not getting a share of the tourist profits. Even so, at the ticket booth at Copacabana harbour, I ask for a ticket to the north. The vendor says nothing and ticks the south box on my ticket and I wander along the wooden jetty to join the queue for the boat.

The wooden ‘bus’ boats are wide, basic and slow, powered by twin outboards. It’s a ninety minute cruise to the island which gets us there shortly after ten. Stepping ashore, a local man collects a 10bob fee in addition to the ticket, just because he can… This is not publicised well but Don had warned me about it. 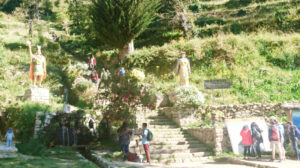 The Isla Del Sol port of Yumani is an area about one hundred metres wide by thirty metres deep between water and Inca Wall. To the right are the Inca steps which lead up to Yumani Pueblo nearly two hundred metres above the lake. I hoick my backpack containing only water bottle and jacket onto one shoulder and stride to the steps. Some young German girls were laden with full touring kit, were occupying the full width of the path bent forward step by slow step and I quickly skipped around them on the steps, as they gasped for scarce oxygen with the effort, and I steadily climbed into the village.

The last sign I spotted was for the path to the north, which I would have been walking down if not for the blockade. I guessed I didn’t want that one now and continued straight on, losing myself in the labyrinthine back alleys. Returning from the edge of a gorge too deep to cross to the viewpoint I clearly see less than a few hundred metres away, I encountered another lost soul. 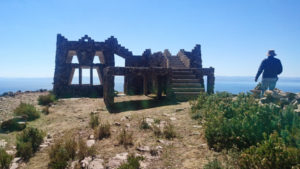 Max was Portuguese but sounded Italian. He was fifty four but looked a lot younger and we shared similar philosophies for life and travel: mainly a preference for solitude but in this case an exception in sharing these stunning views over the lake and distant mountains. It made for a pleasant change. 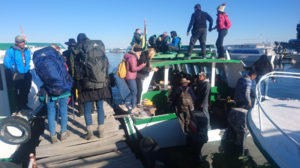 For the return cruise, I nabbed a seat on the roof. High altitude, full sun reflected by the lake, people were breaking out the sunscreen. I just pull my hat down further and covered up with long sleeves. It turns out I’m in a group of four Brits and an Aussie. An hour and a half break from struggling with the
Spanish language. The Aussie had taken the Isla de la Luna option, which left not enough time for enjoying the Isla Del Sol. “Not worth the time you lose,” was the verdict: a bare island with some small Inca ruins but largely a nature reserve.

Stepping onto the Copacabana jetty, I invited Max for an evening drink at around six thirty. He said he’d meet me at my Hostal. I never saw him again.