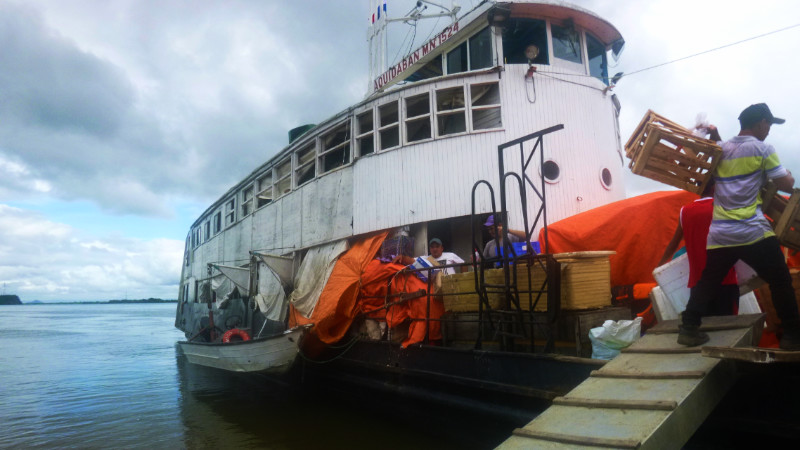 AFTER A FEW days in Concepción, I discover that the magic of this town lies not in the architecture or its quaint echo of antiquity, it’s in the people. Laid back and easy to approach, unlike most western city folk. Walking toward Puerto Concepción, John 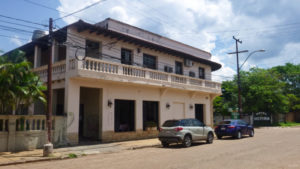 gives me a tour of the Hotel Victoria. I feel we ought to be wearing white suits and Panama hats and waiting for a telegram of what’s new in the Empire – or some such movie scene. The manager invites us to free breakfast. Apparently, it’s rude to refuse so second breakfast it 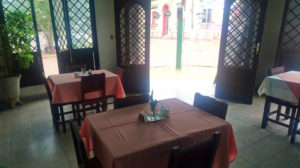 At Puerto Concepción, the Aquidaban is secured to the earthy bank and bridged by gangplanks while individuals manhandle goods aboard. I was going to bring the bike but there is a bus back from Puerto Valle-mi so, Nah!. What would be the point of riding back to Concepcion? It would feel 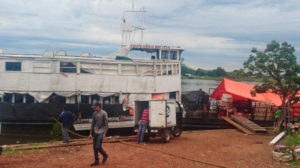 like backtracking. There were four of us: Philip the genial young German heading into the Chaco to visit the Mennonite colonies, Matthew the journalist researching the Chaco wars and a charismatic 73-year-old from Swindon with a theatrical presence and sonorant voice that appears irresistible to the local ladies. 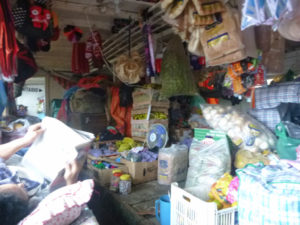 The Aquidaban feels like a post-war film set. A plywood edifice built over a wooden hull, laden with fruit, veg, meat, beer, steel wire, roofing panels, plastic pipes and mysterious sacks and boxes tied down under tarpaulins. Inside on the upper deck are wooden seats occupied with men, women and children and hammocks bulging with men only. 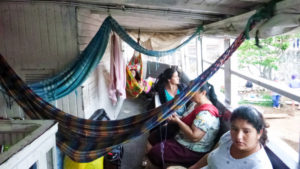 systems penetrate the remote parts of Paraguay. Trucks and buses can make the journey in a tenth of the time of the boat but there is a magic about this floating community depositing goods and people up the Rio Paraguay that will be replaced by nothing else. This magic will die with the birth of the roads. Like how the railways killed the canals in Britain. 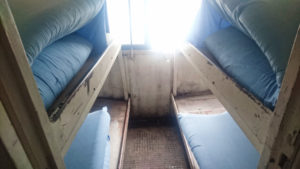 John and I share a cabin, while Philip and Matt dangle in the hammocks amongst the all-night drinkers and talkers. The weather is pleasantly overcast with occasional showers, keeping the temperatures from escalating to sweaty highs. 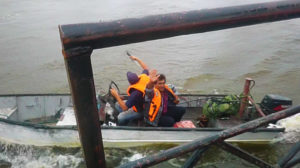 Along the way, people are ferried ashore via the skiff that hangs on the starboard davits without the ship having to stop. For depositing cargo, the bow nuzzles the shore and lines hold her stern as close to shore as possible while goods are handballed over the gangplanks. 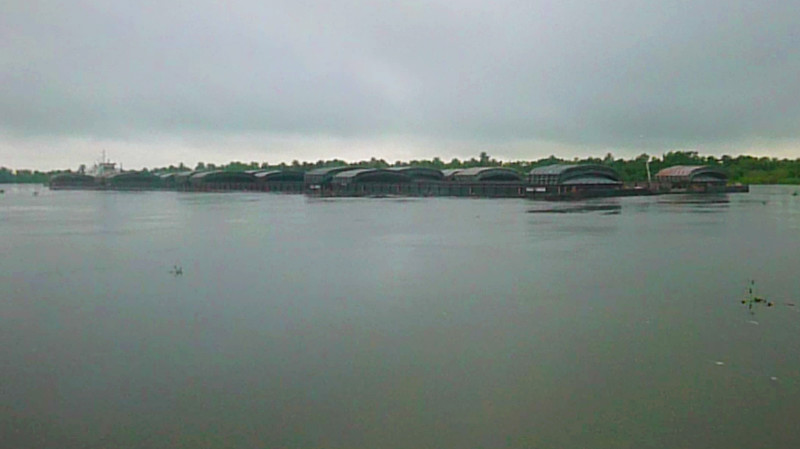 “Absolutely marvellous!” says John like we are cast in another movie scene of a previous era. John had been here in the 50s as a kid and tells me nothing has changed except that the route that is ever getting shorter. No longer does the service run from Asuncion since the roads have carved their way past Concepción up the western side of the river. 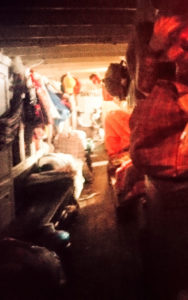 After sunset, locals start stretching out on benches and amongst the cargo. The dim sepia lighting encourages lethargy in the balmy still air smothering the river. The canteen is above the stairwell and the engine below. It’s no good asking for a menu. You get what’s ladled out of the pots. If you find a vegetable then it would have accidentally fallen into this scurvy themed fare. Meat and noodle soup or meat and rice for breakfast, lunch or dinner. I turn in after dinner and a couple of beers in the canteen when the noise of the Latin youth starts to win over the roar of the tenacious diesel tirelessly pushing us against the flow of the water. 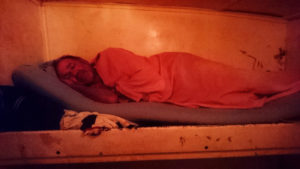 My bunk is a sheet covered foam mattress. I kick off my trousers to use as a pillow and to help the air around my legs cool my body and promptly fall asleep. I awake at 1.30 by people moving across loose planks along the gangway outside the cabin. No engine noise and the sensation of mosquitos drilling my bare legs. Looking out of the window, two nuns in white garb beneath the bright light of a makeshift port. A bizarre enough scene to confuse with a dream. Too hot to go back to bed, trousers go back on for mosquito protection and I go downstairs to sit out on deck. 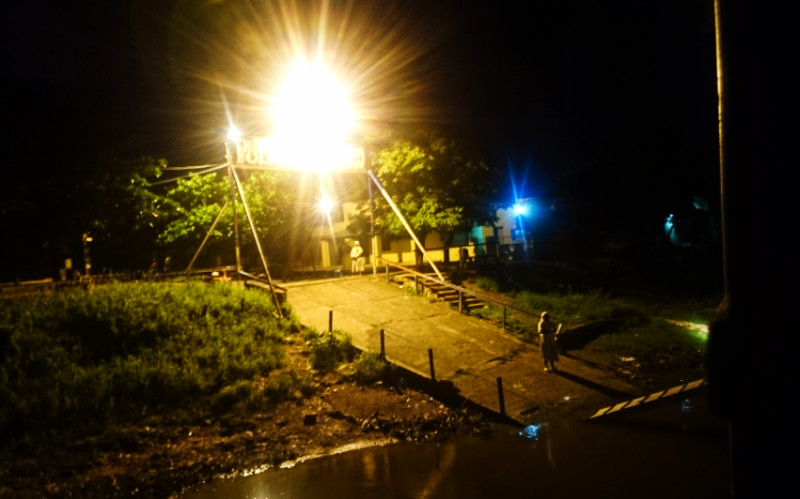 By then, we were already leaving port and the movement of the boat provided a cooling breeze. Still overcast, the near full moon shone through the silvery clouds illuminating the path of the river in shades of black, blue and indigo. Aquidaban displays no nav lights, only the warm low-voltage glow of the interior. 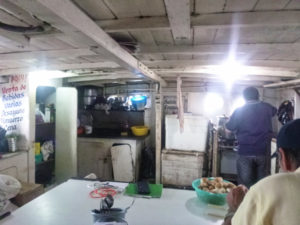 I awake to the muted rumble of the diesel and the thick watery air of a grey overcast morning drifting through the window. I laid in bed for a while enjoying the comfort before fueling my body via my beef stew breakfast.

At La Victoria, Matt and Philip disembark for the Chaco, A 250 Honda Tornado waits to board, 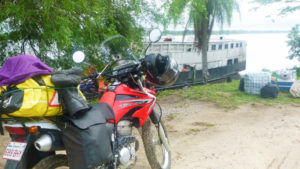 kitted out for a trip. Gabriel, a Jehovah’s witness from Asuncion on his way to Bahia Negra and into the Chaco. Gabriel asked for a second gangplank so he could walk on one pushing his bike up the other. No, it could be done with one, argued the crew and bystanders so instead of two people lifting a plank in place, four struggle at each end of the bike waddling up a single narrow gangplank as if to prove a difficult but invalid point. 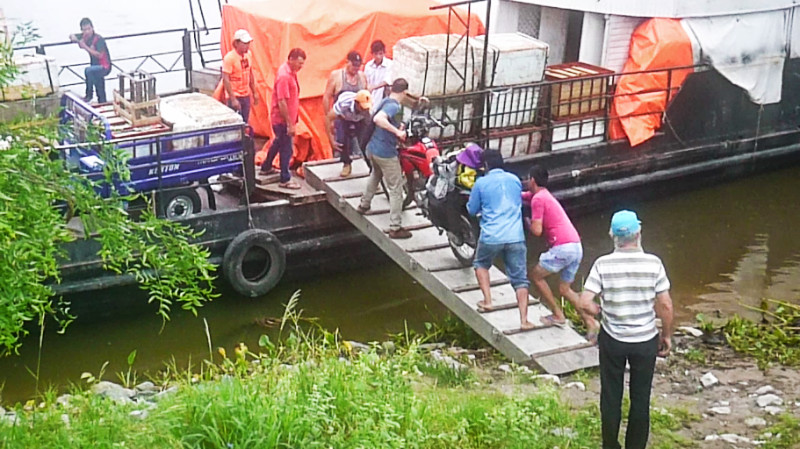 At Puerto Valle-mi, our berth was already taken by a boat being loaded sixpack by sixpack from a lorry load of beer, rugby style along the line thrown from one to the 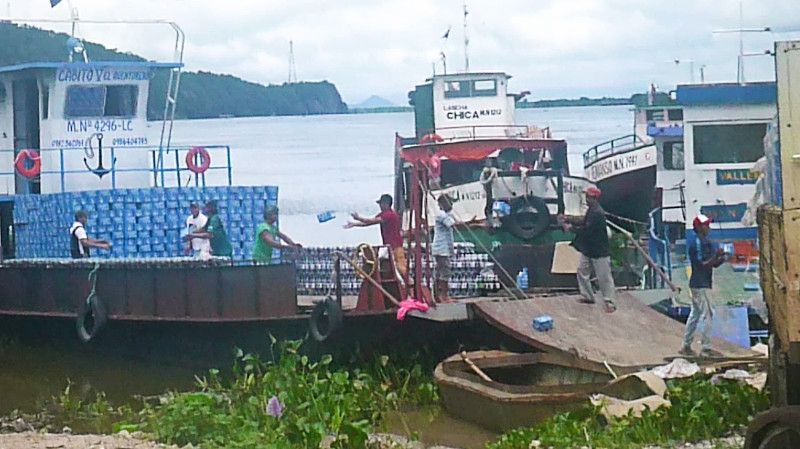 other and stacked on the deck of the boat bricklayer fashion one on top of the other. The boat moved down the shore and the rugby team adjusted its line accordingly before we docked against the earth bank and rattled our way across the gangplank.

The bus arrived only an hour later, a modern doubledecker coach and I had prime position above the driver with full forward vista of the green flatlands of Paraguay. Two hours later we stopped next to the statue of the Concepcion at the end of the street of the hostel. I felt pretty tired, because of not sleeping well on the boat, and snoozed in the hammock on the patio of the hostel. John and I were supposed to walk into town but when I woke, I was just hungry and fancied a quiet dinner alone. It had gone six according to the church bell and I’d already waited long enough to justify a good enough excuse so off I went… 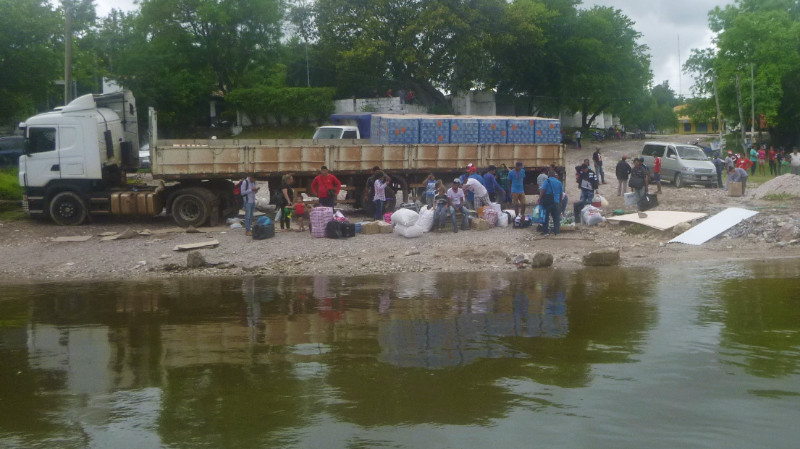 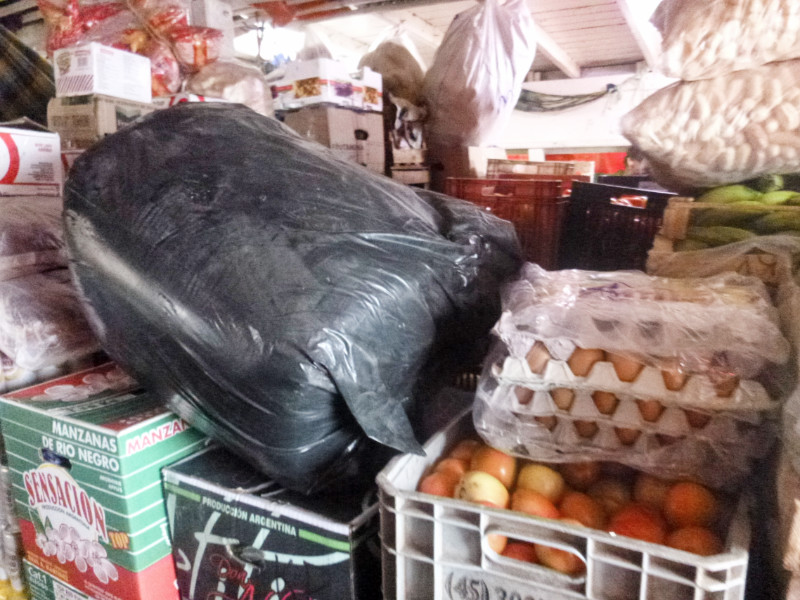 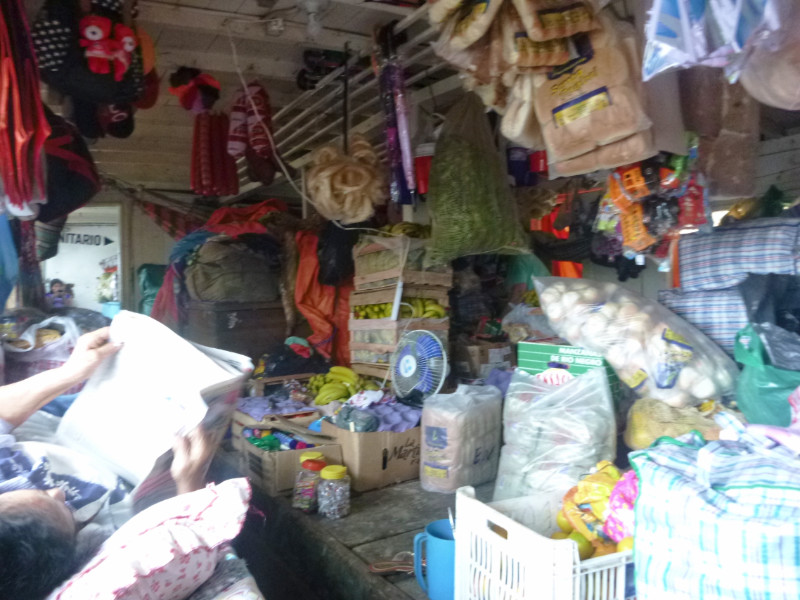 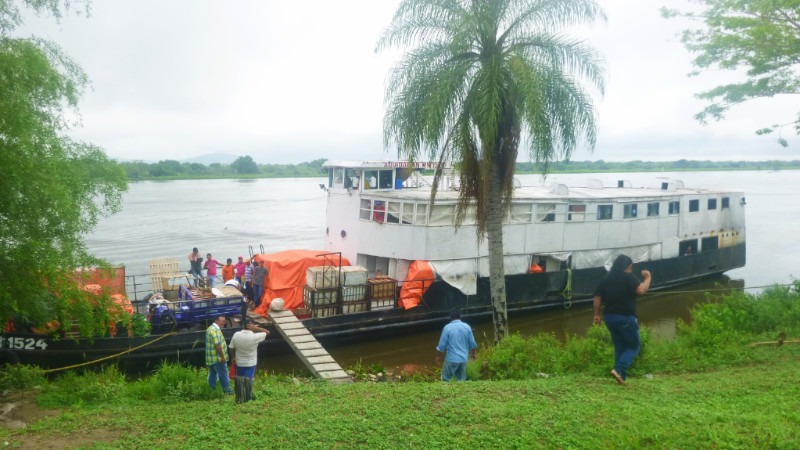 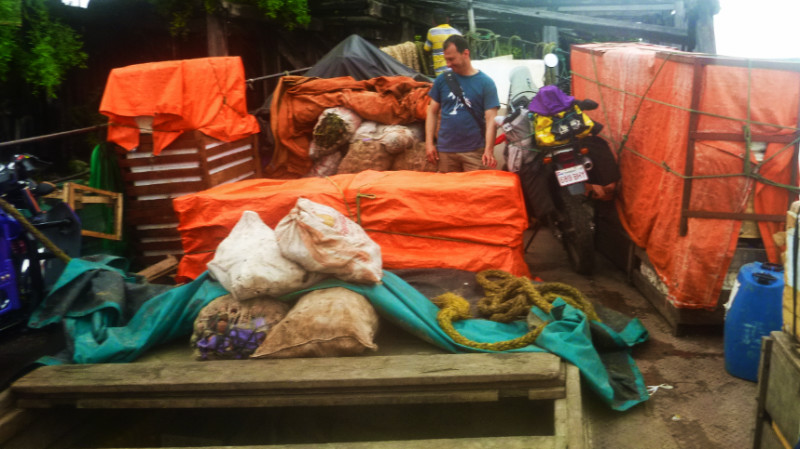 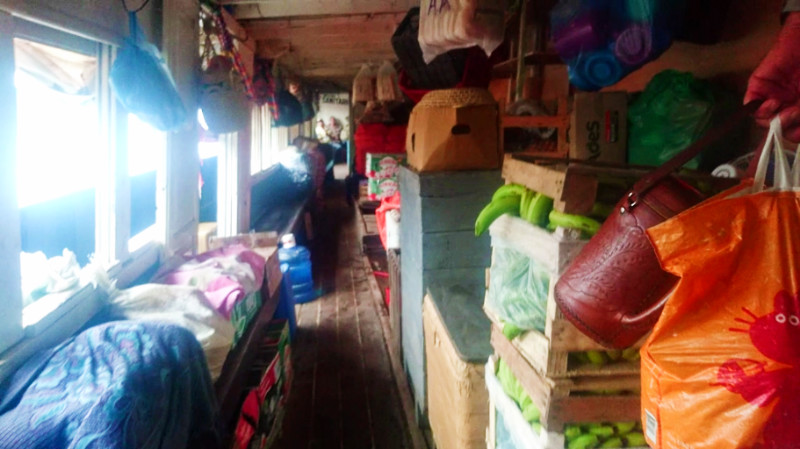 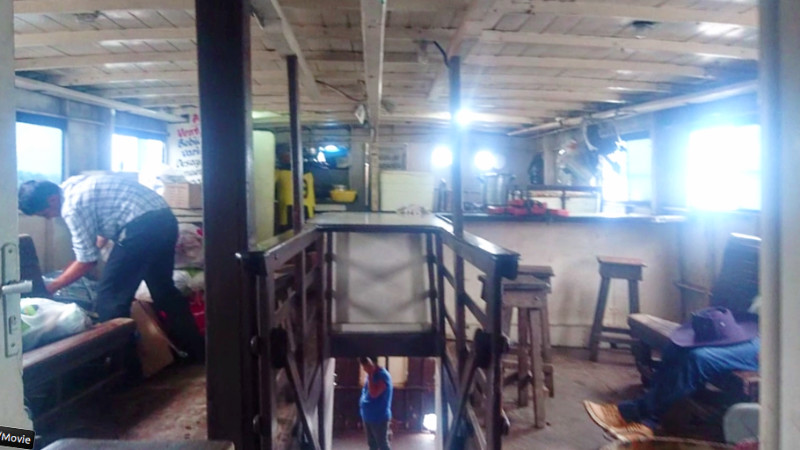 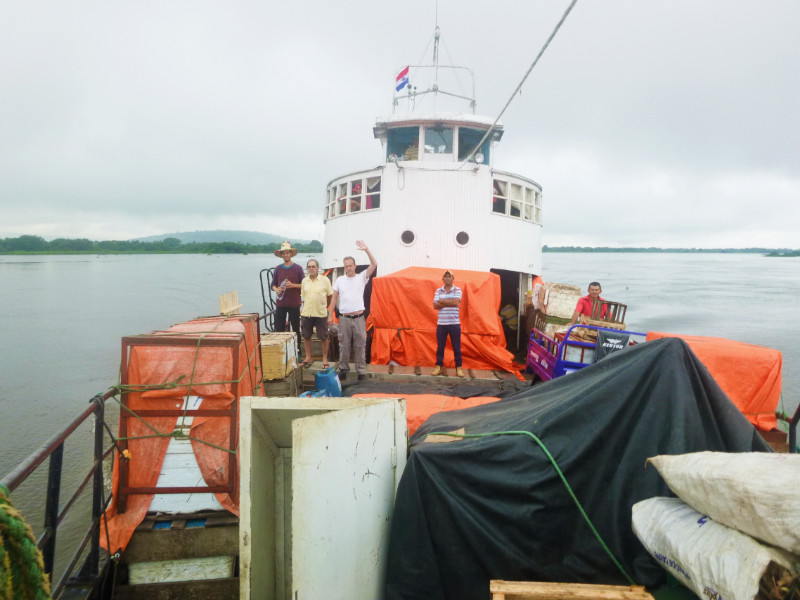 From the Left: Philip, John and Matthew