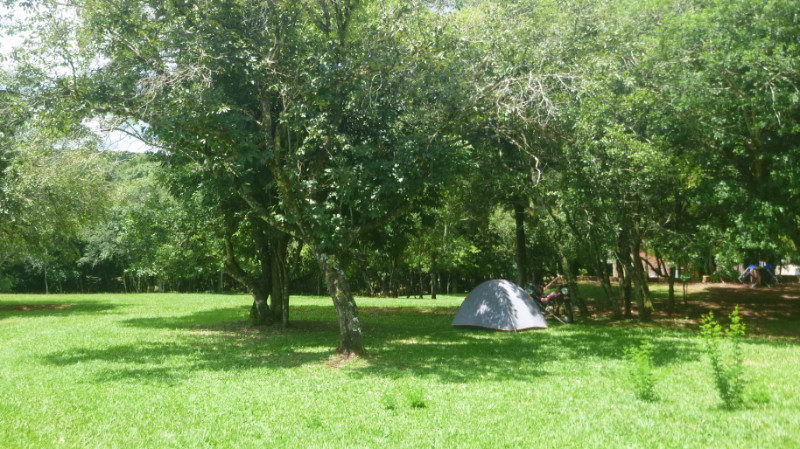 BOXING DAY, PACKING to leave the Maui Waui International Hostel in Encarnación, I notice the new back tyre is flat and cursed the Chacomer fitter back in Asunción. The bike is now fully loaded and I give the tyre a splashy kick to confirm its soft appearance. I don’t want to deal with it now so I inflate it and hope for the best. The pressure holds without any noticeable drop in the 5 minutes I finish tying up the loose ends. I smear a film of spit over the valve and its bubble remains flat. The leak isn’t at the valve.

My objective today is Hohenau, not far past Trinidad maybe only forty kilometres all told. A camping spot indicated on iOverlander as pleasant and cheap, two of my main criteria. The flat tyre is a distraction but I’m soon buzzing my way north out of my way out of Encarnación northward back towards the two missions of Trinidad and Jesus de Travarangue,

Hohenau. Stopping at the first set of traffic lights to check maps.me for the exact location, there it is on the screen, a km back: Camping Manantial. I pull into Parque Manantial mistaking it for a cheaper place the other side of town not realising until I pay for 3 nights at G50,000 per night. The woman on the gate speaks only German or Spanish, as do the owners.
“Sprechen ze Duetsch?” “Nein, lo siento. Ingles?” “Nein.” so it goes. 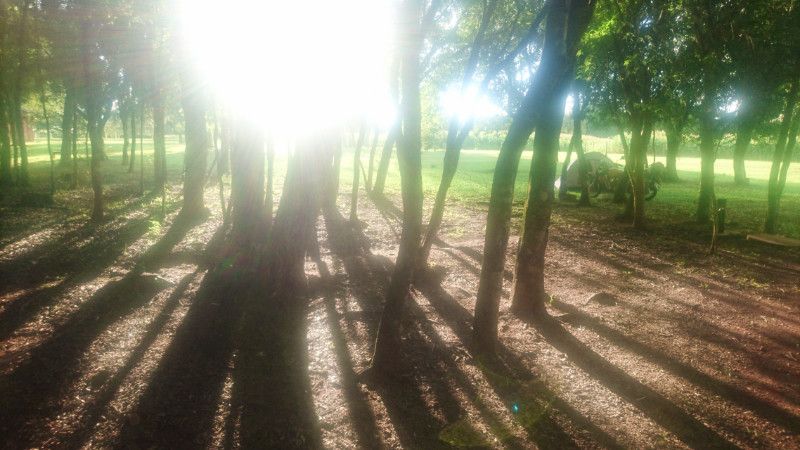 I pitch my tent on the edge of the woods and the grass field furthest from the swimming pool. Good thing too as the usual bass rich music starts pumping out of a speaker down near the restaurant. 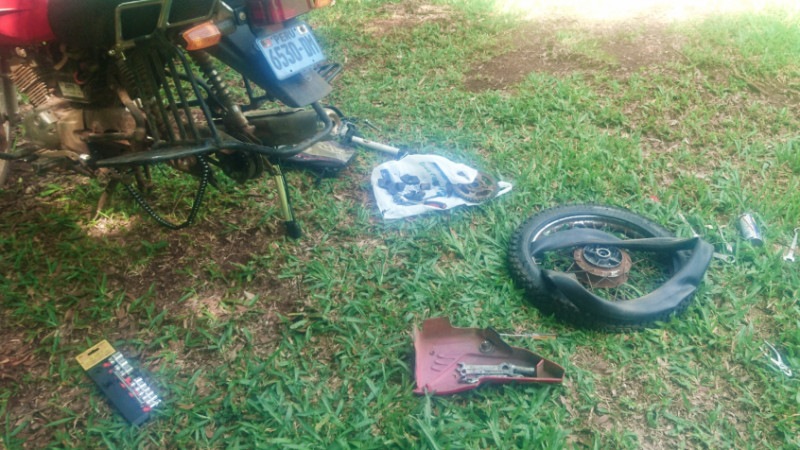 Parque Manantial is a well-presented place in woodland and fields over enormous grounds, hosting a popular swimming pool and smart restaurant. The location I had chosen to camp was far enough away to feel private. There are power sockets and I am at the limit of a WiFi signal but I’d go to the Restaurant for better reception. 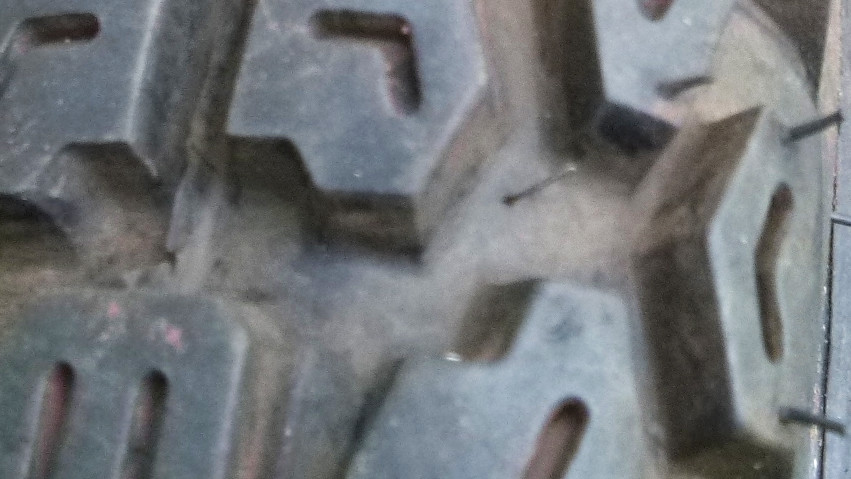 The buffet breakfast is delicious and the air conditioner in the Restaurant makes for luxurious relief in the muggy heat. Back at the tent, I break out the spares and tools and replace the inner tube of the back tyre and discover a hair’s width piece of wire in the back tyre, penetrating the inner tube. 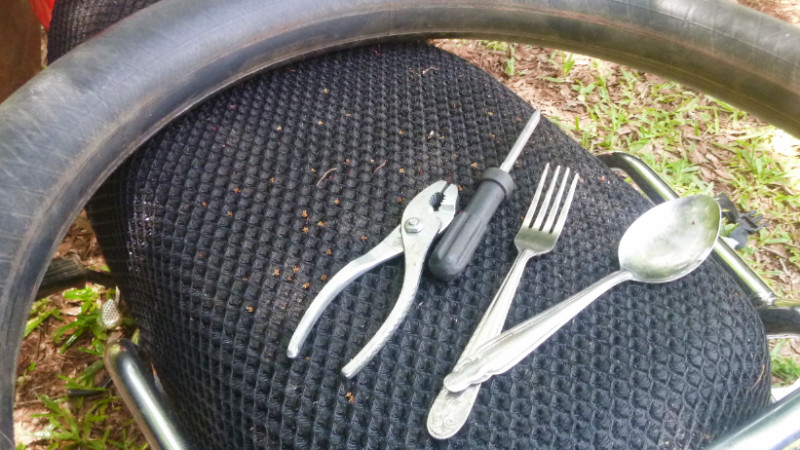 My suspicions about Chacomer were unfounded. In any case, I had taken a week to get to Encarnación without any problem. I took it all back forgiving my suspicious nature and apologising quietly to my innocent victim. I need some tyre levers to make the job easier. Bendy spoons and pliers make hard work of the task. 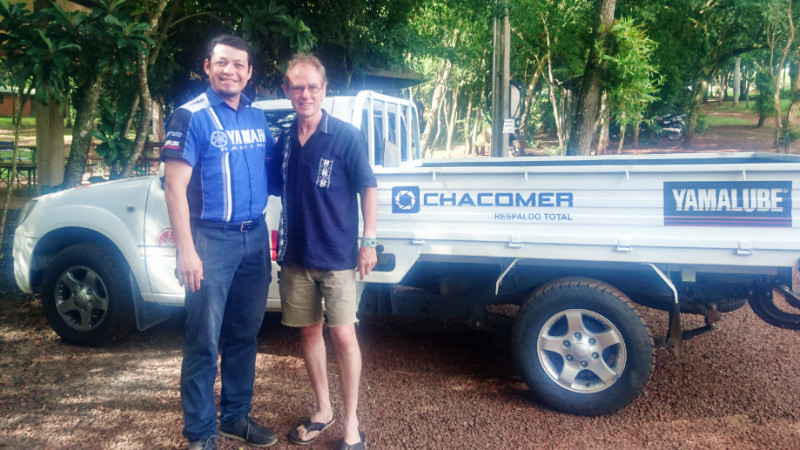 Victor Hugo Benitez approaches me in the restaurant on the second morning. He’s the Chacomer Yamaha area supervisor for the whole of Paraguay and invites me to a barbeque at one of the dealers that is exhibiting the latest Yamaha bikes in Hohenau and I gratefully accept.

I ride up to Hohenau at 7.30 and meet half a dozen bikers already chatting together and over the next half hour, more bikers come rolling in from the north of the town. I sit and talk to Doda and his wife. They grew up in Asunción but their families moved up to Bella Vista 6km up the road to escape Stroessner’s curfews and hard rule years ago. Doda’s wife told me that Josef Mengele worked as a doctor in Obligado, in the next village, after the war and did a lot of good for the people here. Bad in war, good in peace. 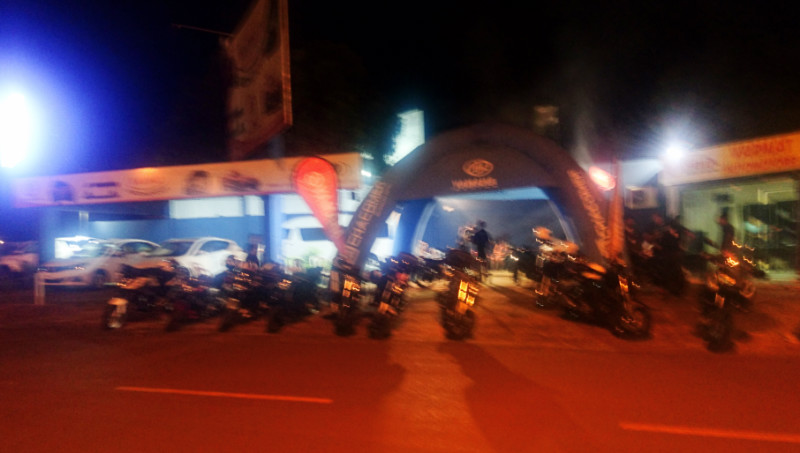 Apparently, Hitler also lived for a time in the basement of a Hotel in Asunción. This was something that seemed to be commonly accepted knowledge in Paraguay. When I think back to my own spoon-fed history, I was told by my state-run institutions that Hitler shot himself in his bunker but I never questioned the lack of evidence. And why bother lying about it? And what else do they lie to me about? When I think back to how I was promised life would turn out if I went to school and worked hard, it was mostly lies for getting me to participate in a post-industrial compliant workforce. And getting robbed of my life’s gains by the Mortgage securities fuelled credit crunch in 2008 was the final straw. Never again…

Toward the end of the evening, a speech was given to round things off and I was honoured with a round of applause for my trip from Peru on the little Yamaha YB125, the smallest bike at the meet. 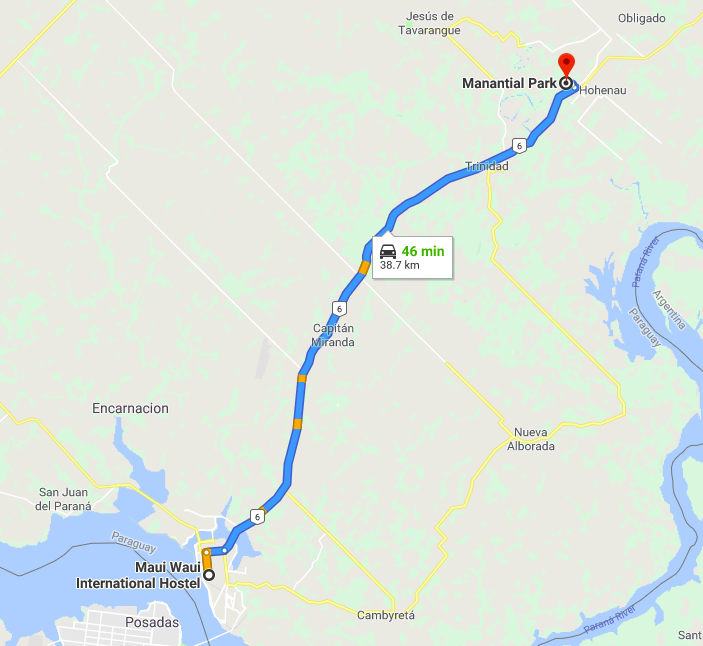