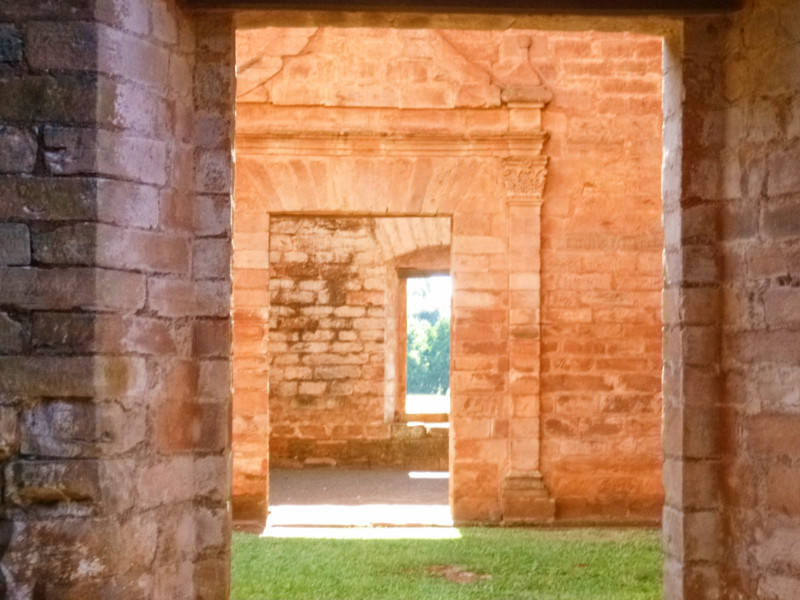 STRIKING CAMP AT San Cosme, I retraced my way back through the grassy network back up to the Observatory on the Plaza. 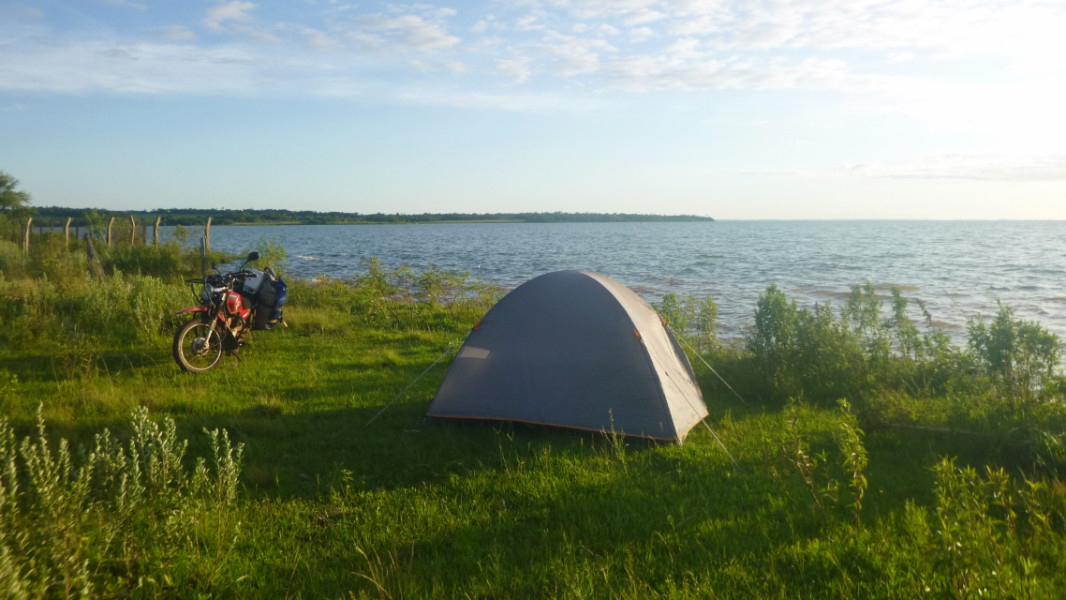 Then took the ludicrous decision to head for the Trinidad and Jesus de Tavarangue missions only because I already had 2 days left of a 3-day ticket in my hand. These were 40km further on from Encarnación and I would pass them later anyway on the way to Cuidad Del Este. For the sake of £2.50, buying another ticket made much more sense, if only I had spared the thought. 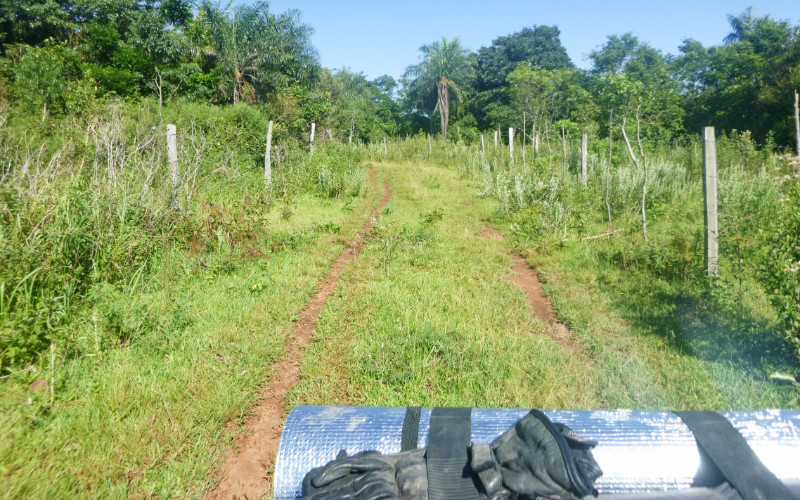 Another short leg of 125km meant I could set off late and look around the San Cosme Mission between combing the surface of the sun for sunspots and pushing on for Encarnación along the solar heated asphalt. 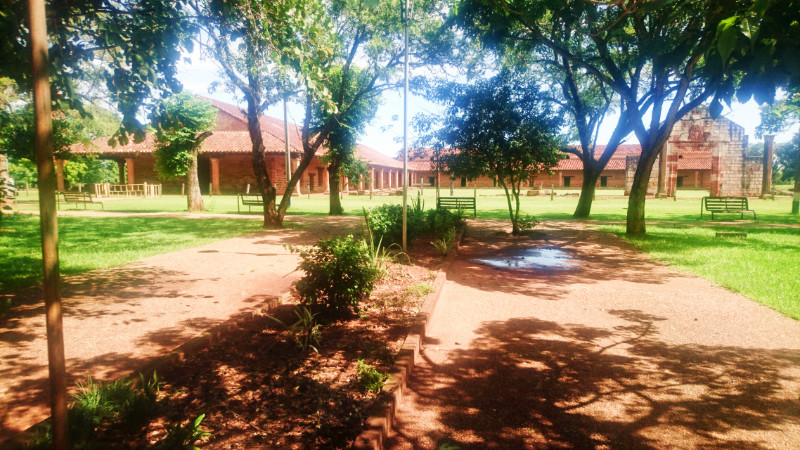 Unesco denied issuing a world heritage certificate to the San Cosme y Damian mission as it had been restored too much. Unesco likes things to be a little more ruined. I liked it restored. Besides, there are two less improved ruins not far away and they give a good contrast to a common template: the layouts are basically similar.

Looking at the building here and learning about how they lived I think I might have liked living as a Jesuit if it wasn’t for the threat of the Paulista slave traders raiding the countryside for easy pickings. 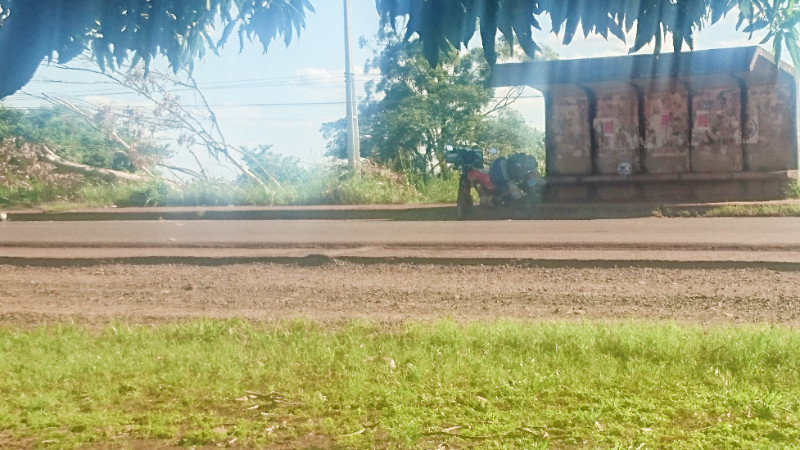 A hot, bright day made the going tiring. Keeping the pace fast and swinging out of the way of the speeding trucks and buses away from the line of sight of the tired driver’s drooping eye-lids, I stopped to rest in the shade of a bus shelter about 15km from Encarnacion.

I removed my helmet and slumping on the cool concrete seat, under the hot concrete canopy in the warm concrete shade. Across the road, a silhouette of a man under a tree waved at me. I didn’t really want to be disturbed but he beckoned me over the road. The path of least resistance was to join him. 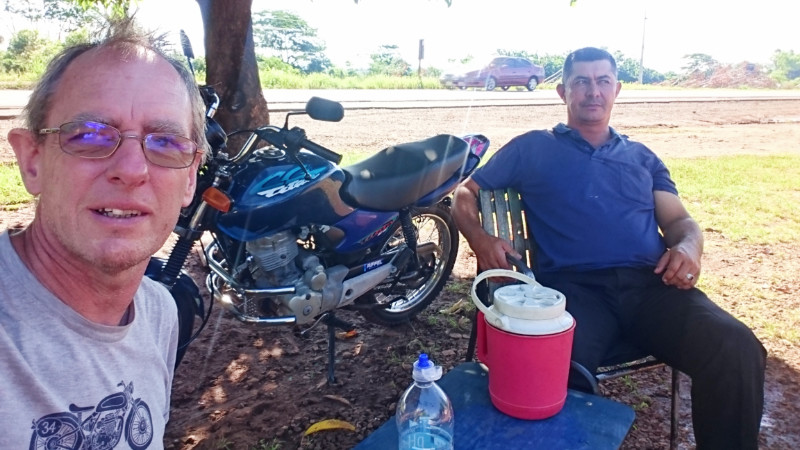 Aristedes is his name and he runs the tyre shop right opposite the tree but there was no-one around to keep him busy. He straightened up a ubiquitous plastic patio chair, the modern emblem of third world living, and asked me about my trip. He showed me his Honda Titan 125 propped next to him, cleaner than mine and probably newer, and talked bikes.

We sat in the shade for a while away from the heat of the day, two parts silence, one part conversation. He rose from his seat and went into the tyre shop saying “Una minuto.” and emerged from the dark doorway carrying a half litre bottle of ice-cold mineral water, sparkling with a sheen of condensation and Aris refusing offers of payment.

He sipped his terere and me my water. “Calor, e?” “Si, mucho!” and we sat in the shade of the tree watching the faint orange wisps of dust drifting down the verge from the passing traffic in the hot breeze. 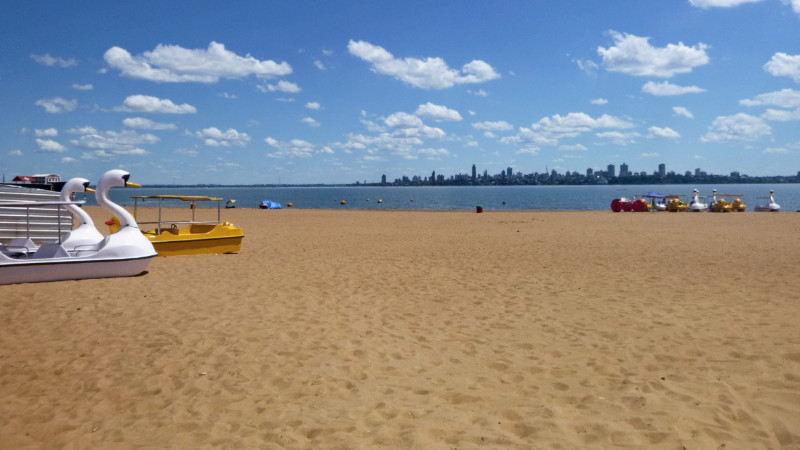 Arriving at Encarnación was as if I were transported to a laid back version of a European resort town with its seafront. Sunshine brilliance. I took a detour, turning right along the costa instead of left, inland towards the missions.

The riverfront opened out into a wide promenade and the sandy beaches reminded me of seaside towns back in the UK on heatwave days, Cleethorpes perhaps, except that it wasn’t Hull visible across the water. On the distant southern shore of the river, silhouetted against the sky stands the tall modern looking Argentinian city of Posadas, far enough away to look immaculate if it isn’t already. 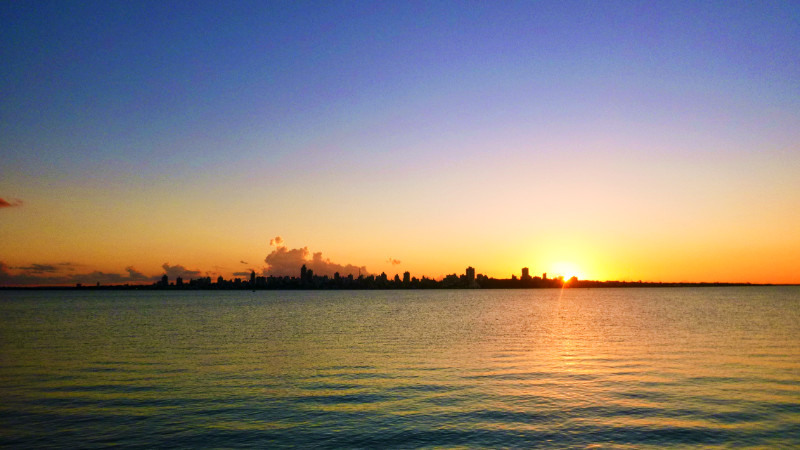 I pulled over to the curb, kicked down the side stand and climbed off the bike to walk along a pier and take some photographs before continuing along the promenade following the river. The road followed a long gentle right-hand curve around the contour of the river followed by a long smooth left, banking slightly, a jolt and grinding noise shook me to attention. I’d forgotten to flip up the side stand and had been riding with it down for about a mile and the left-hand bend now brought it into contact with the road lurching me toward the side of the road.

Braking firmly but delicately and keeping the grinding down to a minimum, I managed to stop before the right side of the front wheel met the edge of the curb. I made a mental note to lubricate the stand so if it happened again it might flick up all the way on its own. I’d gone far enough anyway and swung a U-turn and took a route through the city to resume my route toward the Jesuit missions. 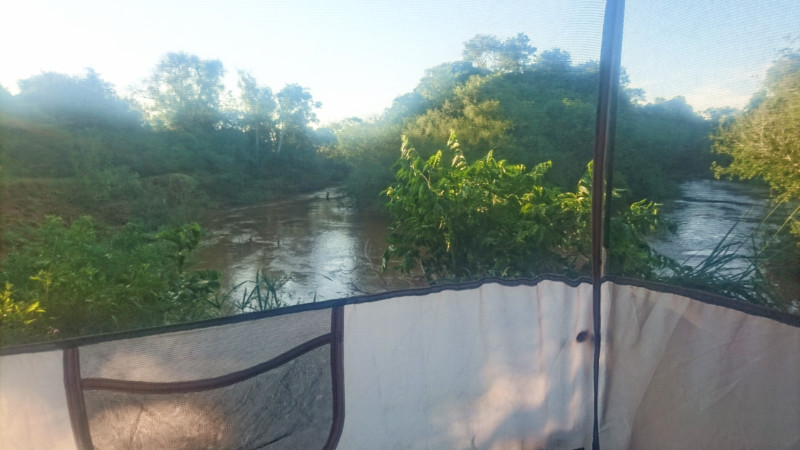 iOverlander indicated a wild camping spot between Trinidad and Jesus de Tavarangue. Ideal looking location on paper or screen. I meandered through Trinidad and caught a glimpse of the ruins from the viewpoint on the hill before continuing to the camping spot. The access wasn’t readily apparent and I passed it looking for a more obvious entrance but this was it, a drop off a large step of asphalt onto a steep loose earth lane down a fairly steep slope to a flat area only about 30 metres from the roadside but mostly hidden by the riverside woods. 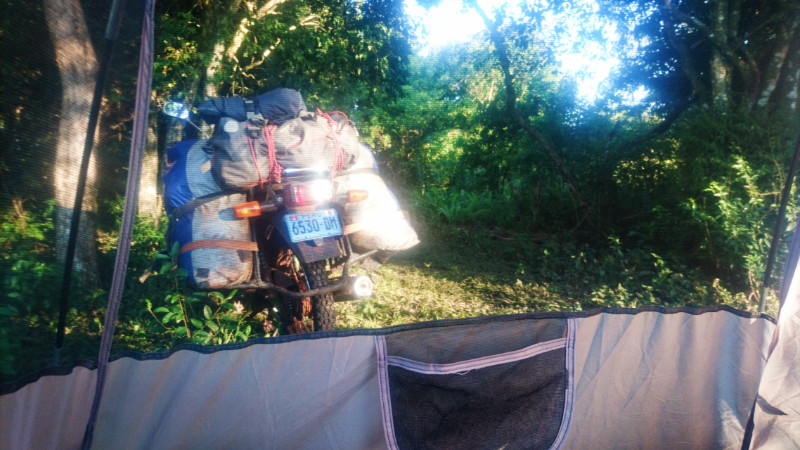 The bank to the horseshoe-shaped river bend was steep and loose and the water an uninviting coffee coloured turbulence about 8 meters below where I decided to pitch the tent. The amount of litter suggested I was unlikely to remain alone here all night but I was happy with it and it didn’t really matter.

On the map, the road between Trinidad and Jesus looked insignificant but all night there was an unending flow of motorcycle, car and truck traffic invading my dreams and stretching the night out into a semi-awakened dreamscape.

At dawn, three motorcycles arrive and the riders started hacking away at the undergrowth. They walked by my tent and we exchanged greetings and I fielded questions about the Peruvian numberplate before they headed down the bank and started hacking at branches. It wasn’t clear what they were doing since the place looked pretty wild but they were all busy with physical exertion. 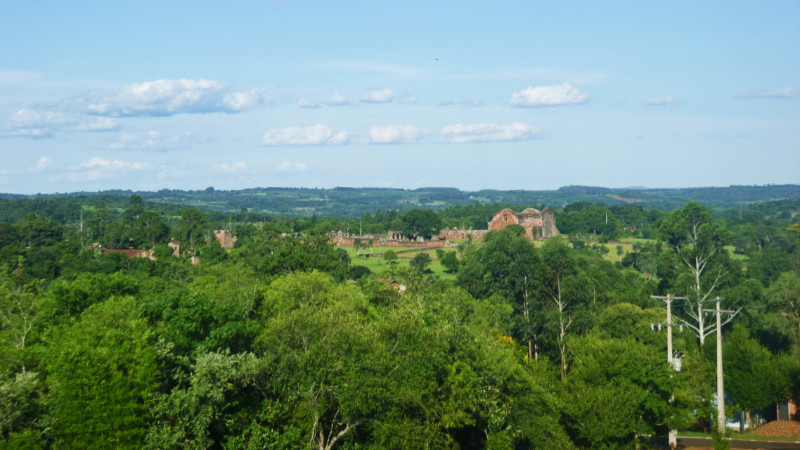 Today was Christmas eve and the opening times of the mission at Jesus de Tavarangue was unaffected. Business as usual. It’s a beautiful site but it doesn’t take long to wander around and take pictures. I’d finished within a couple of hours at a gentle meander resting at the viewpoint taking in the vista of trees and green fields. This could easily be Northamptonshire on a hot sunny day. Rolling green hills, stone buildings and fluffy white clouds. If I were there, maybe I’d be heading my family’s way for Christmas… who knows?  Anyway, the sun was climbing high in the sky and reminding me I’m not home in the cold… 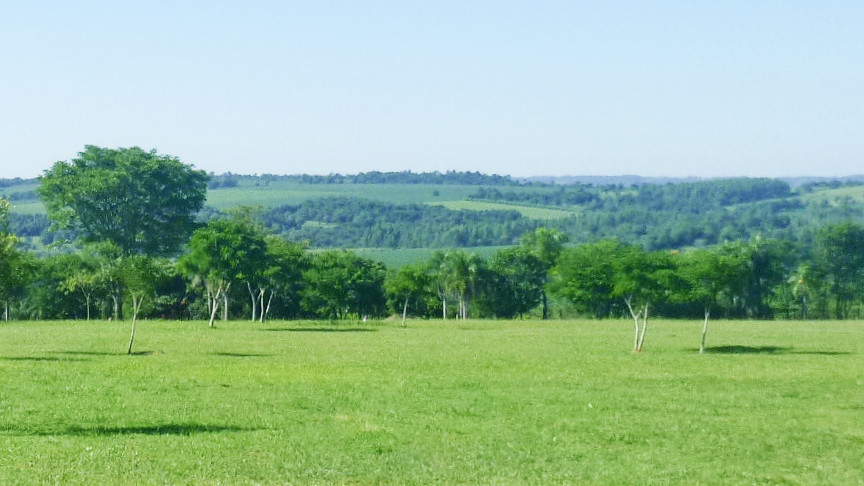 Bradt’s guide suggested embarking early to Trinidad since there was not much shade and it gets hot in the afternoon. The heat was already building here but I figured, I’m right here anyway, get it done in the heat and ticked off the list. 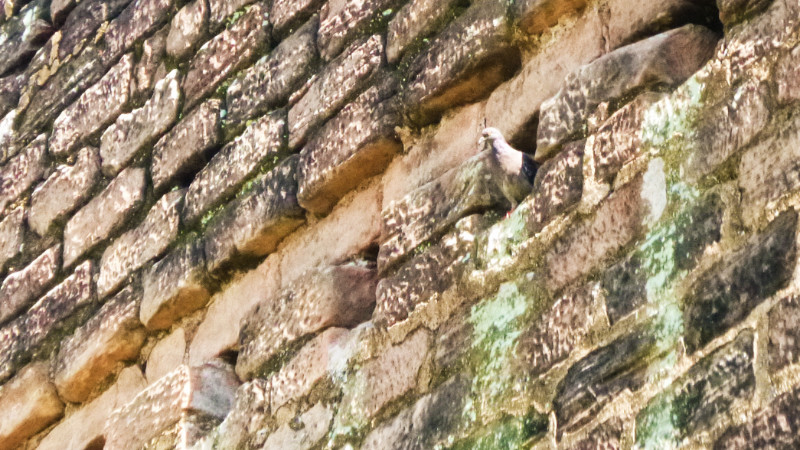 The Trinidad mission is more spread out and has less shade. By noon, the midsummer sun was virtually directly overhead, only two or three days off the solstice, so the walls offered not an inch of shade. Halfway round I climbed a fence and rested in the porch of an abandoned church just outside the perimeter to read some more of the guide while pretending to cool down. 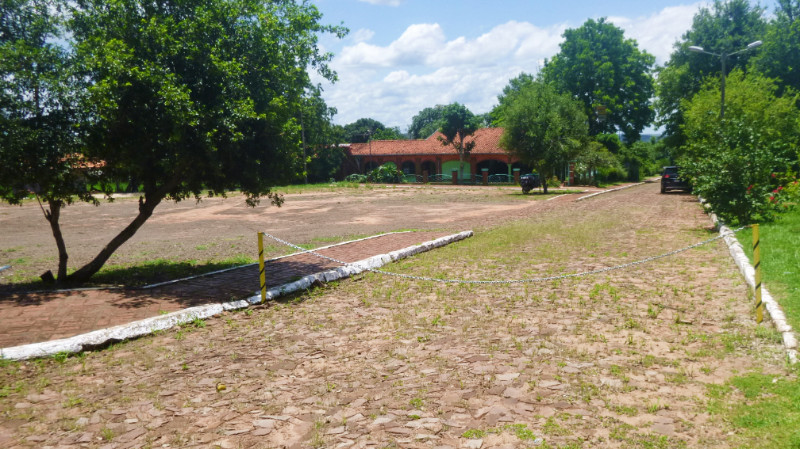 The springy lawn felt like I was walking on a mattress. Walking felt energy sapping on every stride, like some authority imposing a tax on each step. There was more ground to cover here but I thought Trinidad lacked the quaint beauty of the mission at Jesus de Tavarangue. Afterwards, I dropped into the hotel near the ticket office for some lunch and refreshment. A woman with a beaming smile walked in. I asked her if she knew any good camping spots here, mainly for conversation but open to changing my plan of returning to Encarnacion. She didn’t know but escorted me to the Mission ticket office where she translated what the ticket office staff told her. I’d already been up to the hill with the viewpoint they were talking about before settling at the riverside woods and it felt too exposed for me. I just said thanks and left with a wave an adios. I wouldn’t see them again anyway. 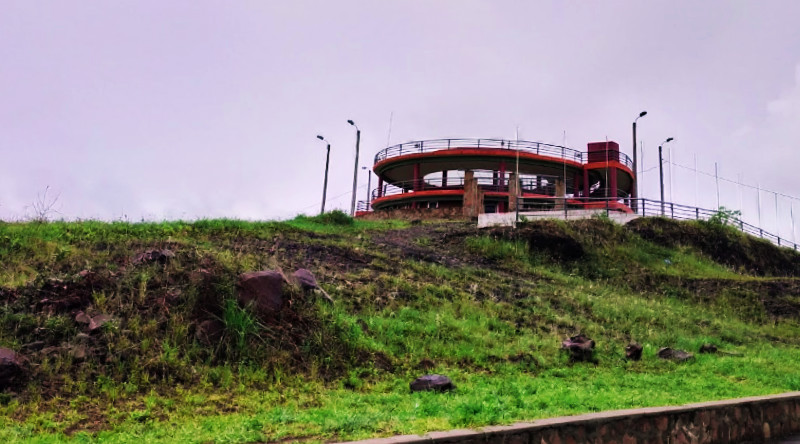 Trinidad was closer to Encarnacion than Jesus so the journey back didn’t take long. Cruising the streets, eyes peeled,  I didn’t notice many hostels and there weren’t many listed on my apps, particularly at the budget end. Checking iOverlander, Maui Waui was just a block away around the corner and I pulled up outside. Nobody about so I waited in reception for half an hour on the WiFi until Jorge, the receptionist recovered from a siesta.

I was shown a bunk in a 4-bed dorm and flopped onto the lower bunk and basked in the remnants of the cool breeze of the air conditioning above while chatting to Isaac, a Canadian involved with an ecological project in Paraguay and Brazil.

Another traveller entered the room and stooped to look at me and I was stunned to recognise Martin from the El Jardin in Asuncion from about a week ago. I thought he’d gone to Brazil already. It’s the first time I’d crossed paths twice with a traveller in South America. Big continent, small world.

The next morning was Christmas day and at breakfast, the woman with the beaming smile I’d seen at the Trinidad ruins appeared in the kitchen, Minerva from Colombia who spoke competent English. She asked me about the camping spot she’d divined for me up in Trinidad and I told her that it felt too public and exposed and I decided to come to Encarnacion instead.

Encarnacion is a cute town with tree-shaded streets in the familiar latin grid pattern, spreading up the slope away from the river. Many of the hostels were closed, presumably for Christmas, but one or two shops were open and I got some beers in for the guys. 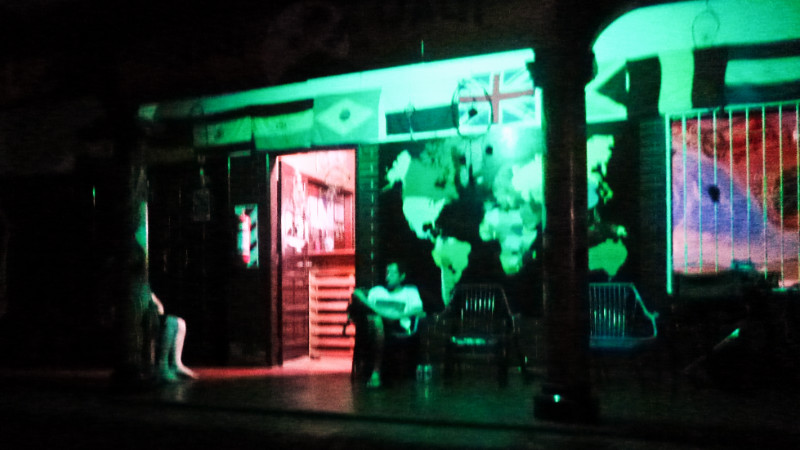 Jorge invited me for barbeque but it when I asked when we would eat, it was going to be about 10pm. I don’t like eating that late and declined but stayed up sipping beer while Jorge was cooking. A tall European who spoke impeccable English but chose not to asked us what kind of music we liked. The Doors was one, Creedence Clearwater Revival was another. Classic Rock from way back using real instruments… anything other than thumping bass and electronic crap that drowns out a good time in night-clubs.

I finally turned in at 11.30 and the food was still on the grill, to the beat of the thumping bass speaker and squawking electronics, underpinned with the mute harmonies of rumbling stomachs.

The Maui Waui is all right but not that cheap. All the accommodation in Encarnación is more expensive than everywhere else I had been in Paraguay. On top of that, other than a vacation spot with a great beach, there wasn’t much else to keep me here.  As usual, I was behind with the blog but that didn’t justify the accommodation rates here. Hohenau had WiFi for cheap, according to iOverlander… 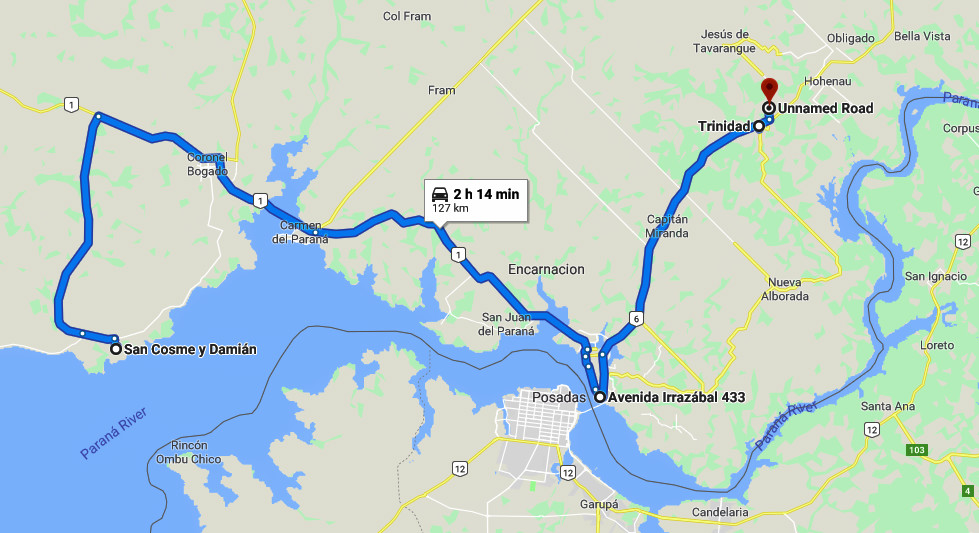