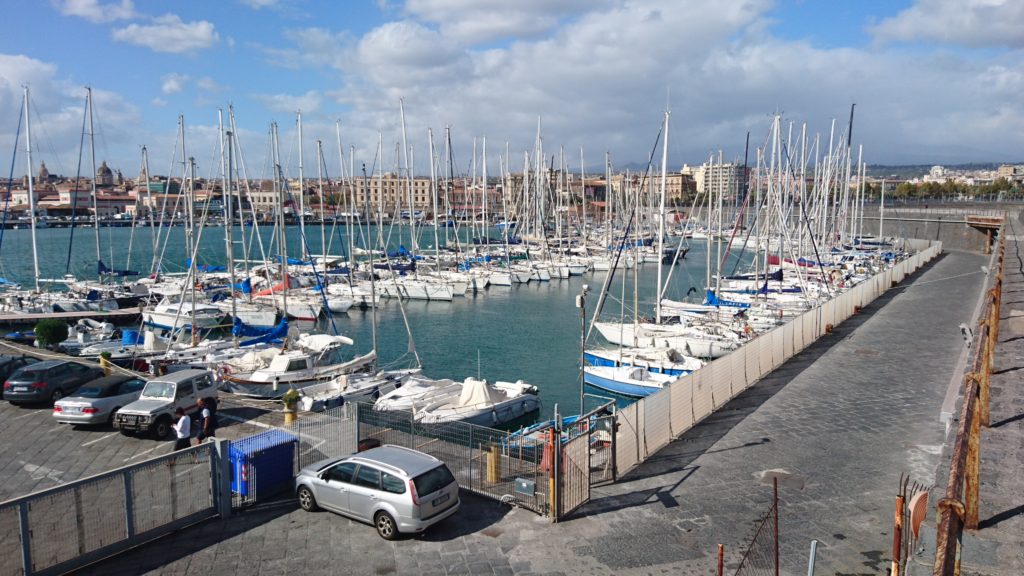 Santo, the marina manager, caught the lines thrown from the stern of Pantelisa as she confidently drifted stern-first into the berth after a powerful burst of throttle. Santo remembered Toni from when he was in Catania a couple of years ago, which helped in securing the generous loan of his car to ferry the Italian Navy’s empty fuel canisters to fill up with diesel at a gas station and back, then relay by wheelbarrow to syphon into the boat’s fuel tank. 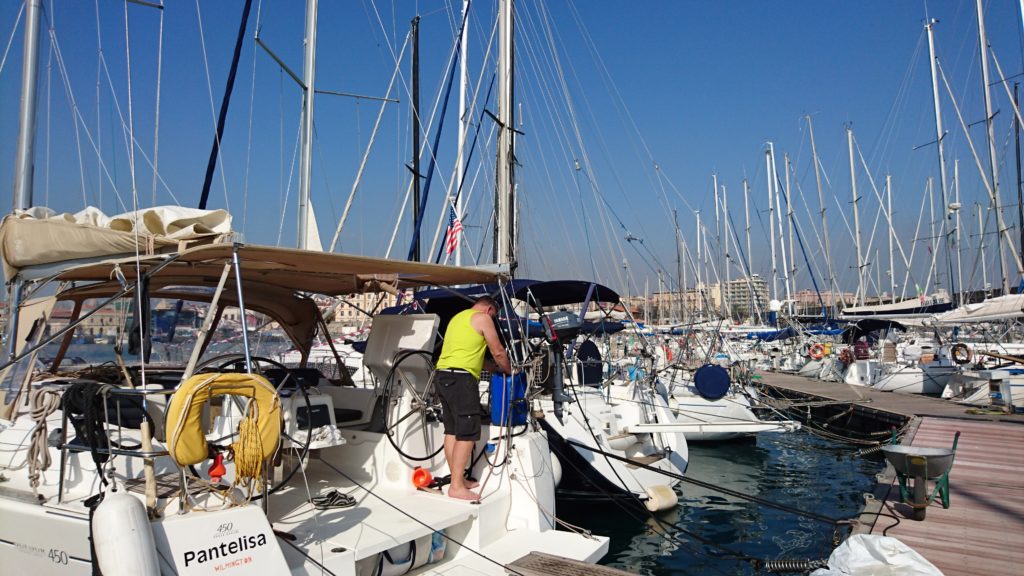 With the boat topped up, deck cleared and hosed down we could actually kick back and relax for a bit. Note for the future, check the cockpit windows are closed before hosing the footwell, Toni’s mattress got a good soaking.

However, “worse things happen at sea” and “every cloud has a silver lining and all that.” Removal of the mattress gives access to the fuel tank and revealed a diesel leak around the tank inspection hatch, so we caught that before it found its way into the bilge and started stinking out the boat. 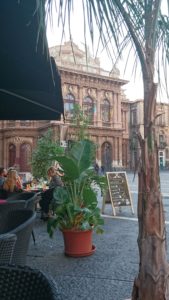 Toni treated us to a few drinks at the Piazza Vincenzo Bellini and a nice meal at the Trattoria la Pentalaccia. It’s a different experience sharing space with people on land to on the boat and I get to know Toni and Rolf a little better. On the water, the background mission is always the boat. Our lives depend on it so we are never fully off duty.

With Toni and Rolf returning home to Switzerland, I’m left minding Pantelisa alone for two weeks until Thomas, the new skipper, arrives. There are still jobs to be done: laundry of the bedding, repair cracked bimini frame, install anti-chaffing fitment at the top of the mast, and restock the galley.

I keep promising myself to take a trip up to Etna but I stay on the boat three days without leaving the marina. I walked down the jetty to see Santo in the Marina office and show him the cracked frame of the Bimini. “Tomorrow, com-see…” and another day passes.

I return to the office to see Santo but Toni is there instead. Toni comes and looks at the crack and says “Ees too theen. See Franco tomorrow, over dare in ze bianco building.”
“What that white block with the three windows?”
“Si, bianco.” 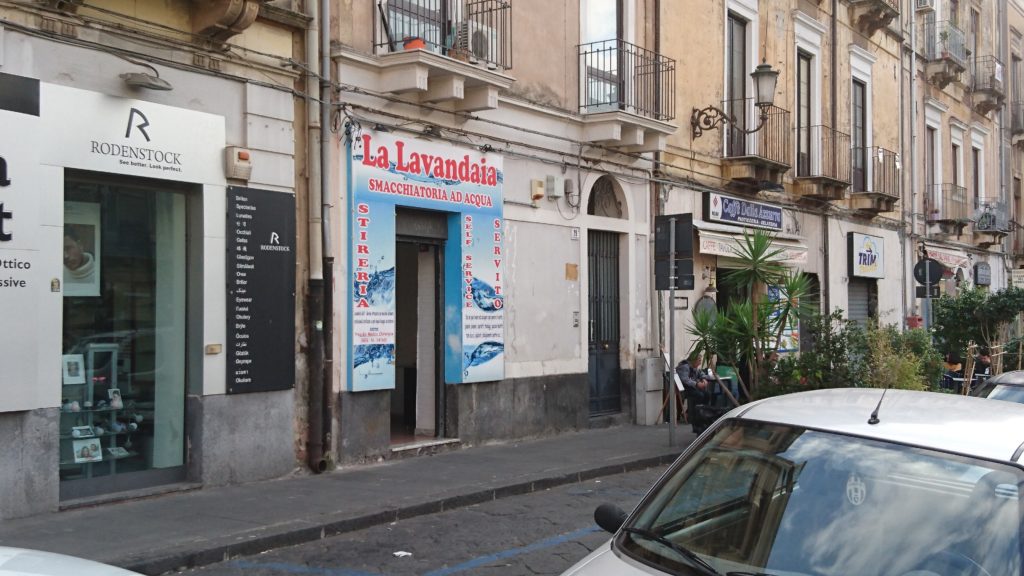 The next morning, I pack up the laundry into my rucksack and head off a mile through town to the laundrette I picked out on Google Maps. I stop at Franco’s “Si. He no here. You com tomorrow.”

Flip-flopping the Sicilian streets gives psychological break and drifting around the sultry plazas while the clothes and bedding were tumbling dry loosened some of the brain cells that start to stagnate in comfortable surrounding. I return to Pantelisa with fresh and fragrant bed linen. A job on the list ticked off, achieving a sence of achievement.

The part arrived for the mast and I collected it from the office and contacted Luigi who had agreed with Toni to go up the mast and fix it. “Si, I come Saturday.”

Saturday came and I winched the little Italian up the mast with his drill, bag of nick-nacks and the all-important part.   All was fixed after an hour and a half of Luigi swaying nonchalantly in the Sicilian breeze at the top of the mast. 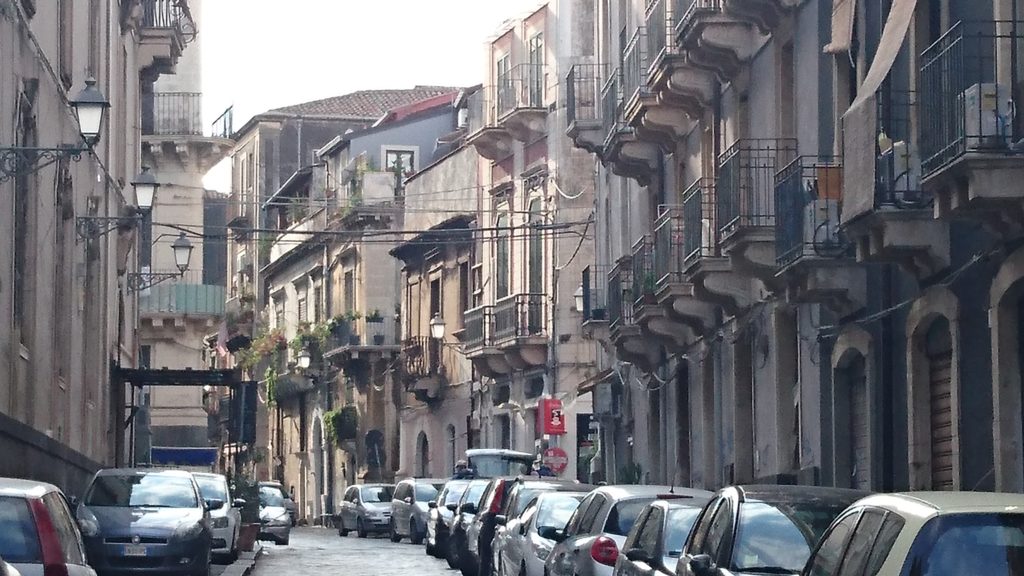 Whilst checking my messages out on the deck a young French guy shouldering a generous backpack wanders along up the pontoon and asks if I am going to Africa and could he have a lift. The answer was no, Gibraltar, but if he wanted to go there instead, I’d ask the owner and skipper, if it’s OK, let him know.

It turns out it’s OK with everyone and I message Julien to come in a week. He turns up an hour later with his rucksack and guitar. He’d been sleeping on the beach so, as much I preferred to stay I Pantelisa alone, I invited him to use a cabin for the week.

The next day, Julien says he’s going to Etna and do I want to go. I look up at the peak. I see the snow and think about my flip-flops.
“No thanks. You go and let me know if it’s worth it.”

Etna: €30 Cable Car; €15 Bus and €9 Jeep to the summit. You could probably save money by walking up from the cable car but it would take a couple of hours; longer wearing flip-flops. 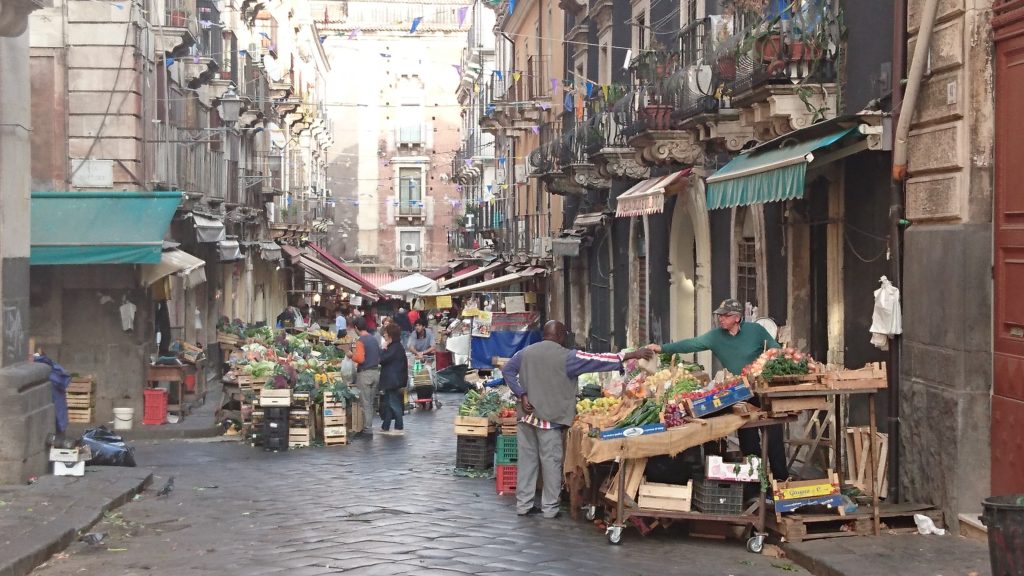 Checking with Thomas the new skipper about provisions, he says “Get what you want and we’ll need about 100 litres of water…” The store that Toni pointed out is three kilometres away. Apparently, they deliver. Problem solved… until I get there and they tell me they don’t

“Ees no problem. When you ready, you com and I call taxi.” say’s the store manager. Fair enough. I match what’s on my list with what they have, leaving a quarter of my shopping list unsatisfied. I leave the water. I’ll get that later.

The manager who offered to phone a taxi is no longer visible. I consider pushing the shopping trolley three kilometres back to the boat but it would be a rough ride over the cobbles of the port. I attempt communication with a non-english speaking woman. She phones a taxi number using my phone and hands it back to me with a puzzled look. I dial the number again “You have insufficient credit for international calls, please top up your…” I hang up. The woman gets help from the attendant retrieving trolleys in the car park. He doesn’t speak English either. “I take machine. Twenty hours.” flashing his outstretched fingers twice, indicating twenty.
“You mean twenty minutes?”
“Si, twenty hours.”

I can wait twenty minutes so I agree and he disappears to retrieve a beaten up Fiat 127. More like twenty seconds. He takes me back to the marina and I sort out ten euros as a token of my gratitude.
“No ten hours! twenty hours!”
Ah, I get it… I hand over another ten euros. It was still worth every penny. Third job ticked off.

There’s a different guy in the office. Not Santo, Tony or Giuseppe. I didn’t catch his name. He speaks a little English. I show him a photo of a ten-litre water bottle and ask him where I can get them. “Ees very far. Need taxi.”

I messaged Luigi to see if he could help fetch water “I haff water on boat. You can haff. I com Friday.”

Friday comes and he has 40 litres in 2 litre bottles to add to the 30 litres already found in storage on Pantelisa. That would do, there’s plenty in the tank we can use for tea coffee and cooking, and it tastes clean. Fourth job ticked off.

WiFi is good at the Marina. I signed up for a course that a friend of mine was running called “28 Days of Courage,” which takes a specific personal challenge at gets you to take small actions to break down any resistance and change habits. I decide on posting a video every day since I hate being in front of the camera, public speaking and presenting. It occurred to me that perhaps I’m on a journey that might offer value for others if I shared it. I don’t know. Perhaps it will bring some purpose in my uncertain future since the recent sinking of my home in the Caribbean.

I see Franco at the ‘bianco’ building. He rattles around some boxes to find me a piece of pipe to strengthen the bimini frame but he can only fix it if I bring the whole frame in. The bimini frame looks like a giant metal puzzle and I have no tools or other person to attempt a repair. The pipe is meant to go inside and then riveted in place but the insert is too narrow to be tight and too short to restrict movement. There has to be another solution. I decide to deal with it Saturday when Thomas,  the skipper, arrives and share the burden …