The Long Way Round to Machu Picchu: Aguas Calientes 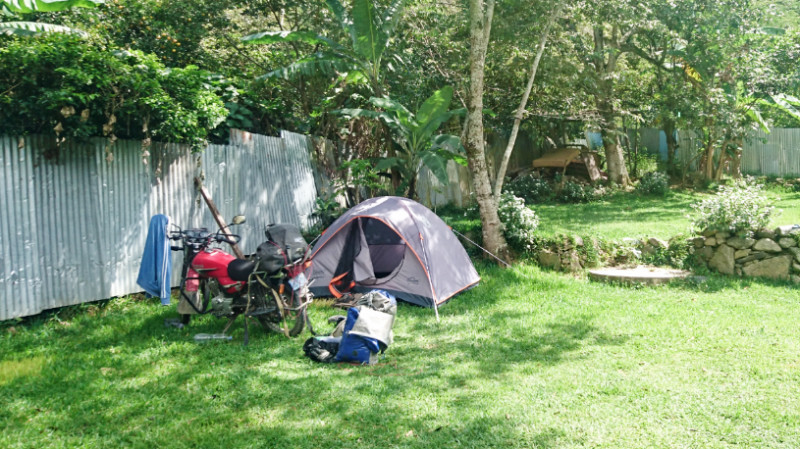 Wednesday, 9th of May, after a sleepless night, listening to the kindergarten crowd shouting along to Gangnam Style, La Macarena and various blaring popular banalities, I emerged when the sun began to warm my tent to find a deserted campsite with the staff packing away the tents. Presumably, the hikers were now nursing a hangover through the Sacred Valley, Gangnam Style.

Today was the day to head to Machu Picchu. I had wanted to bike to Hydro Electrica where I could walk along the tracks. Two issues held me back. One: find a safe place for the bike with my worldly belongings strapped to it. Two: packing everything away again. So I decided to leave the tent and bike where it was and walk the 10 Km to Hydro Electrica and maybe get the train from there. 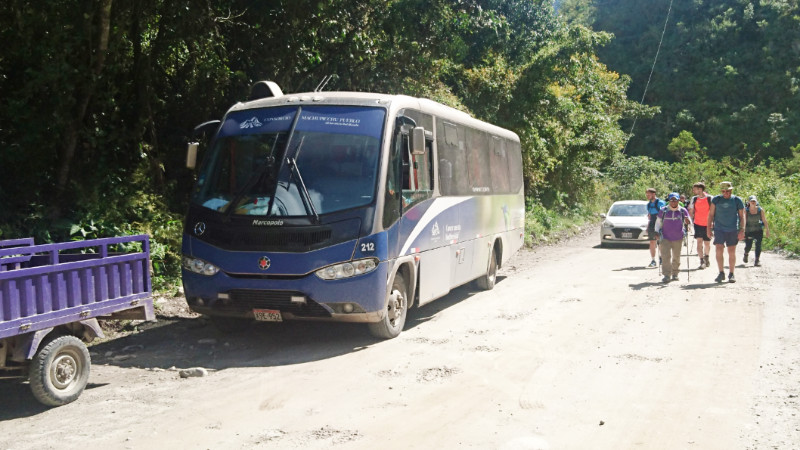 I packed the basics in the rucksack and stepped out of the campsite to follow the road that followed the river toward Machu Picchu. A car pulled up next to me and asked where I wanted to go. He wanted S/30, about £8. I declined the offer and the price dropped to S/20. No, I’ll walk. I crossed the river and the sun beat down on the pale shadeless track. After a kilometre, I rested under a solitary tree for a drink of water. Putting the bottle away, I noticed a bus coming round the corner. I watched it approach and stood up as it pulled up next to me. The driver asked “Hydro Electrica?” “Si, quanto es?” Six Soles! Result. I climbed aboard.

The road resembled the narrow track I had travelled on to get to Santa Teresa on yesterday, narrow, dusty and twisty yet not so far above the valley. 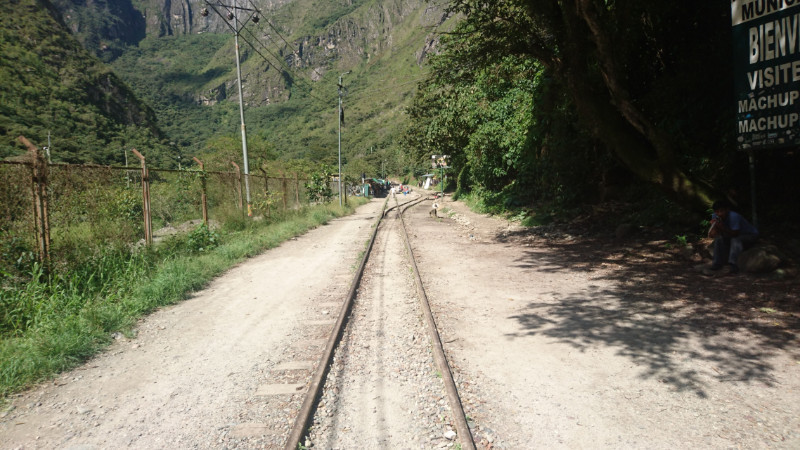 Hydro Electrica was not what I expected: something like a mini Hoover dam in Nevada. It’s actually a car park at the end of a railway siding with a few buildings scattered along the valley and a railway siding lined by cafe and souvenir stalls. I could hear the horn of a train echoing around the mountains, followed five minutes later by the train itself. 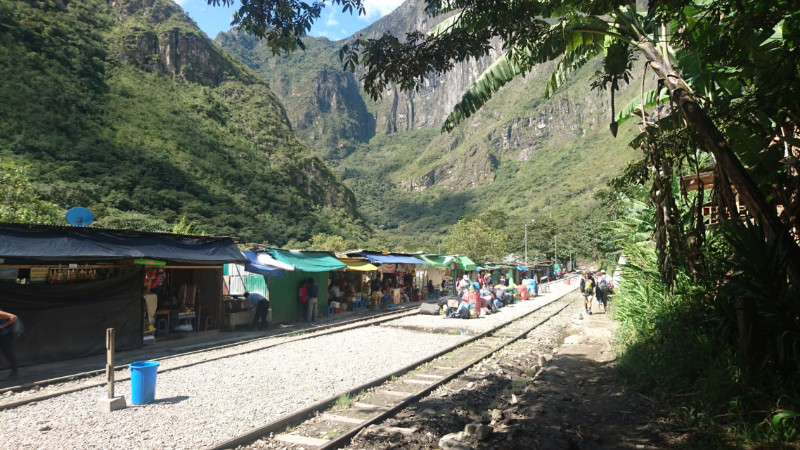 After watching the shunting and activity at this make-shift station, I headed down the track ignoring a sign next to a rail-side hostel that pointed out a pathway up through the woods to Machu Picchu. I thought it easier along the tracks and continued around the bend following a pair of Swedes until we came to a dead end. It looked as if there had been a landslide some years ago and it was left here abandoned on the tracks.

Backtracking the 200 metres or so to the footpath, the ascent through the trees emerged on the main line and I turned left to follow the sign to Machu Picchu. Passing another cafe, Inti Watana the menu caught my eye “Nachos con Guacamole” followed by soup and a main course. S/10 bargain. Not what I expected. Two nachos ‘con’ (being the operative word) guacamole… Still, there was plenty of soup and a decent main course. 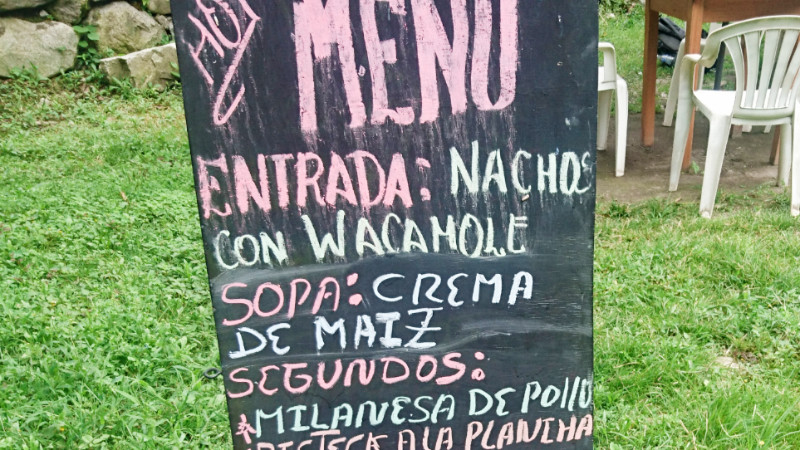 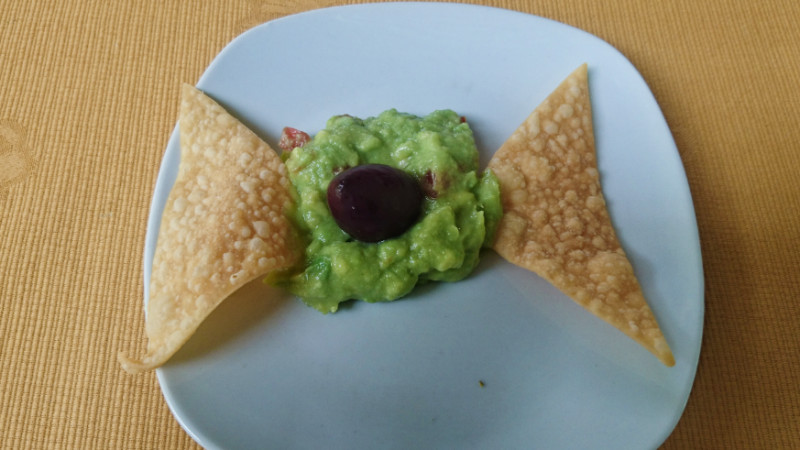 It was gone 2pm by the time I set off. The 10km walk is reckoned to take 2 hours. It’s not a lonely trek, this one. The walk to Aguas Calientes is a popular one saving $33US each way for a 10km ride. There were a lot of people walking towards me. Presumably the Machu Picchu morning crowd on their way home.

The heat of the day was tempered by the valley’s forest canopy arching high over the tracks. The railway follows the river round in a horseshoe shape around Machu Picchu which remains invisible from the valley floor. It remains about 3Km away as the line circles it yet constantly out of sight. No wonder the Spaniards didn’t find it on their South American looting spree. 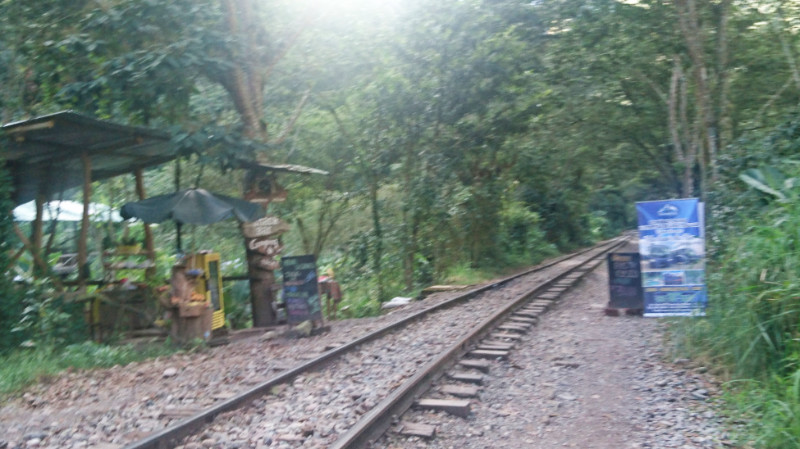 Scattered along the railway are food shacks and vendors, campsites and hostels. Everything you’d normally expect along a roadside. It’s a bizarre arrangement but it works well to regulate tourism and preserve the site. 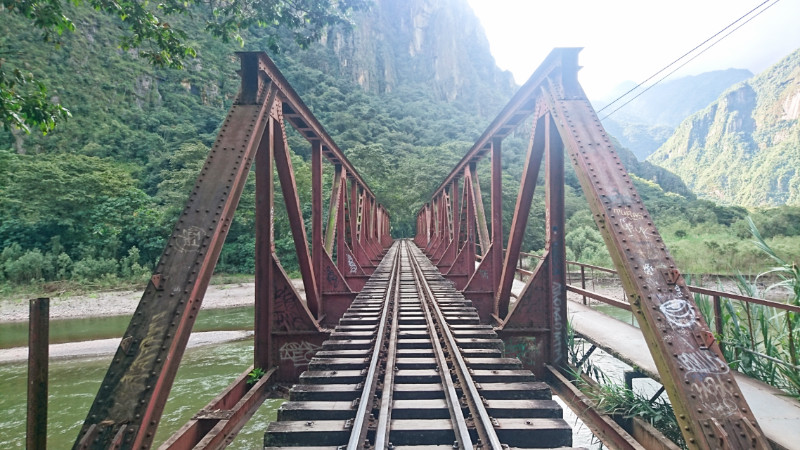 A few trains passed me both ways on the single track. A delicate act of scheduling, I imagine, so as they cross at the very few passing places.

It was gone 5pm by the time I strode up the incline to Aguas Calientes past the surprisingly opulent hotels. The steep mountains enveloping the town seemed to bring on a premature twilight. I was glad of the earlier collectivo bus that stopped to pick me up else it would have been dark a couple of hours before my arrival and my stiff back would have been so much stiffer. 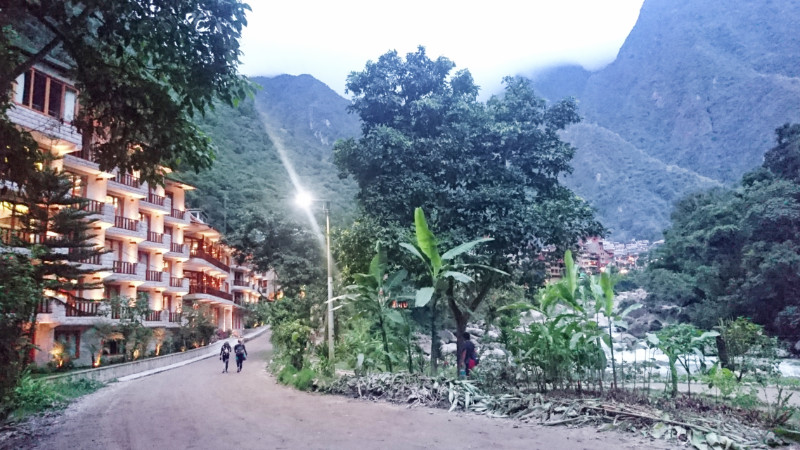 I ducked into the first hostel I found to try my luck at finding a dorm. The young receptionist could not understand my Spanish or English but worked out I wanted somewhere to stay the night. Presumably, as I was standing at the reception of a hostel. “S/30?” I agreed and she beckoned me outside, leading me to the main square and up an alley to another hostel, Huillca Wasi. A private room with a view out to the mountains and ensuite. It was more than I hoped for and only about £8 a night. 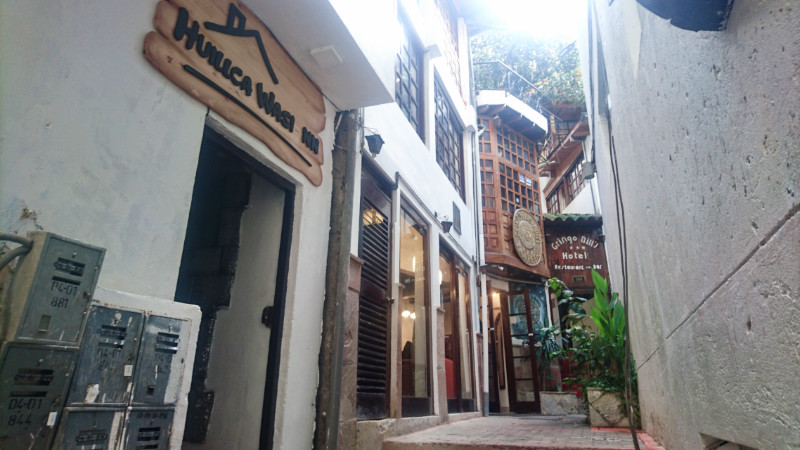 The girl helped me check in and led me to the bus station kiosk to buy tomorrow’s bus ticket up the hill to Machu Picchu and then to the ticket office to the attraction itself. Walking to Machu Picchu is a 400m scale up rocky stairs, taking about one and a half to two hours. I wanted to be fresh at the site so opted for the S/40 single; more expensive than the hotel.

I’d heard of Huayna Picchu and that it was popular and often crowded despite limited ticket numbers so I opted for number 2 not knowing anything about Machu Picchu Mountain.

Schedules are tight and my ticket time was between 7 and 8am. Just to make sure, I’d be out of the Hotel by 6am for the half hour bus ride up to the entrance. I was set, ready and booked for the big day. I could relax and have something to eat before resting in a comfortable bed after two weeks of camping. I wasn’t even going to come here and had no interest when Debbie had told me Machu Picchu was her dream but I found myself in Cusco that I wanted to honour her memory more than any personal desire to see it. I thought of her a lot along the way; during the ride across the mountain pass of Abra Malaga, the narrow cliff road to Santa Teresa, the walk along the railway to Aguas Calientes. This was a pilgrimage in her memory and, already, I’m glad I came… 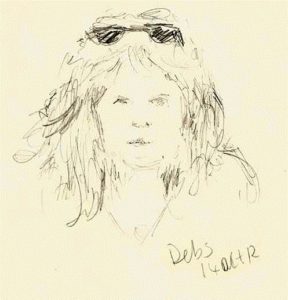 Next post: The Long Way Round to Machu Picchu: Lost City of the Incas