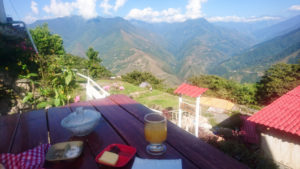 BREAKFAST AND LOADING up the bike in the morning, I say my final farewells to Luis and Fernando, fine hosts who I’ll miss. Fernando seems to think I can make the hill up to the town, but I’m still doubtful. I roll down the hill to get a run up the steep cobbles. Keeping the revs up I’m fast across the rough surface and the bike attacks the base of the incline and jumps around the oversize cobbles up the hill. I’m standing on the footpegs fully committed now. Stopping would be a disaster and end in a 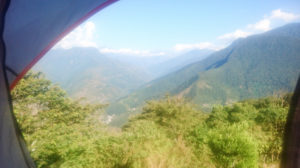 certain spill at this incline on this surface. Barking dogs start the chase but give up about twenty metres later with the bike leaping over the boulder-sized cobbles. the engine note starts to wane but all I can do is hang on for the ride holding the throttle fully open. And I make the top with momentum and revs to spare. Reaching the 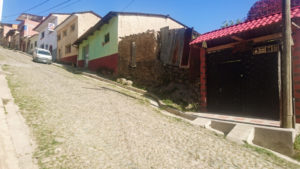 junction at the top of the hill, I’m carrying on whatever ‘s coming. Parked cars were all there were. There was no round of applause from the onlookers watching me bounding up to the junction, but I got the impression that not many fully loaded 125s are seen taking this particular route and I cruised around the corner without bothering to stop.

On the outskirts of Coroico, the road degrades from block paving to dirt and the pale yellow dust rises into the warm dry air. 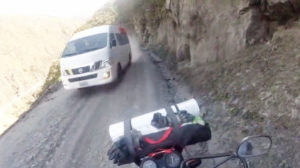 The gloves are off; partly for the challenge of offroading across Bolivia and partly because my hands are warm. My jacket is packed away and I wear combat trousers and cotton top to enjoy the warm dry weather while I have it.

The traffic is light compared to European standards, mainly minibuses with a few large trucks tearing up billowing plumes of dust. I stop and get my head face down on the bike’s fuel tank until it passes and what breeze there is carries the cloud away.

I’m on route 40 that intersects the South Yungas Road, route 25. On the map, it’s a bright yellow wiggle joining Cochabamba to La Paz. Back home, this would imply a major route, paved. Not here. Gravel, rock, sand and dust is the order of the day. 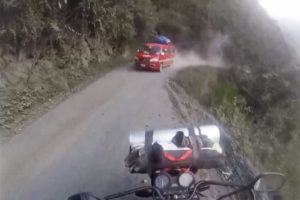 The track is often wide but sometimes narrows as it winds its way around the contours of the mountains, not as high as the North Yungas Road but every bit as dangerous. Speed humps are camouflaged by the dust in the villages but I’ve come to expect them and slow as a matter of course. Chickens scatter between the huts and lazy dogs lift their heads and sometimes move out of the way, sometimes not, as I drift by either side. 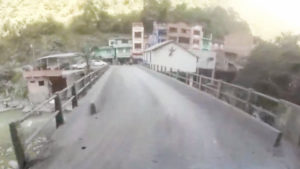 Eventually, I cross the bridge to Puente Villa. Despite Luis’ assurances that it is a good road to Cochabamba, there is no indication that it improves any past Puente Villa. I’m not certain Luis has even seen a paved road. I’m already beige with trail dust and taking half a day to travel fifty kilometres could mean taking a dirty and gruelling week to Cochabamba. I hang a U-turn and cross the bridge to pick up the westbound South Yungas road towards La Paz.

A loose and dusty surface, the South Yungas road, slightly smoother with more traffic, otherwise similar to route 40 to Puente Villa. The closer to La Paz I get, the more the surface changes. Asphalt, block paving and cobbles introduce themselves at random intervals. Picking up the speed and leaning round the bends into the descending sun had me hopeful I would be back at the hostel in La Paz before dusk. Grey scars down the side of the mountains had the valley looking like a quarry. There had been some severe landslides here and plant machinery was busy clearing the way.

Three workmen in the back of a pickup called out as I pass. Often I continue but this sounded important. The way ahead was blocked and they pointed up a steep freshly dug dirt track that zigzagged up the mountainside. A red pickup came bouncing down the track and around the corner, disappearing from where I came. I had noticed this track on the way past but didn’t take it seriously as a road. It looked like a farm entrance. 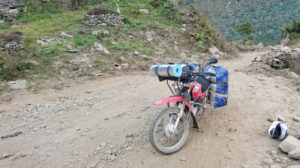 The earth was red and loose with large rocks scattered along its surface. I had to keep the revs high to stay in the power band in order to climb the hill. Jumping and bucking over the rough ground, I made the first couple of slopes but, on the third slope, the engine bogged down on the steepest section at the top of the third slope. I stepped off the bike and left it resting for a few minutes to cool down. A minibus came bouncing down around the bend and rocked its way down around the last bend I managed and disappeared into the valley. Looking up, I could see where the bends were dug away. There were at least another four more, as the road climbed like a ladder up the mountain. 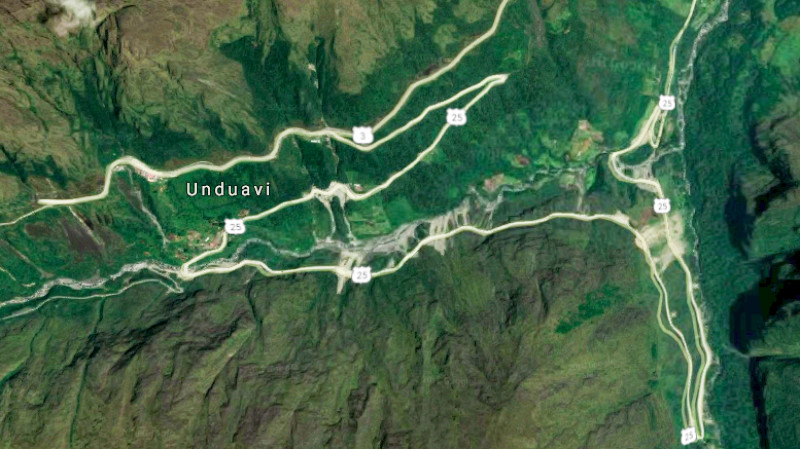 Options from here? forty-five kilometres back to Puente Villa, one hundred back to Coroico, five hundred to Cochabamba. The Coroico route was the only other to La Paz and it had already taken most of the day to get here. It would be dark soon. There was no other choice: this dirt ladder or nothing. After a brief rest and more contemplation, I fired up the bike and did the same as I did in La Paz. Used the engine as well as push at the same time to get the bike up to the apex of the bend. It’s a difficult skill to regulate either the revs or the bike speed without dropping it but I was getting the hang of it. I felt better past that steep section and on the more level ground at the outer apex of the bend and I rested and stopped to think a bit more.

A red minibus came bouncing up the hill and swung round the bend on full lock blocked by my parked bike and was forced to stop. Shrugging and complaining at me, I shrugged back. I started the bike and moved it another metre and a half. The minibus’s wheels span in the earth unable to climb any further, forcing it to reverse down the slope for another run-up and off he bounced around the corner, missing the bike by half a metre and bounding up the hill, only to see him reverse back down again followed by a convoy of four minibuses coming down the other way.

I decided to take off up the hill before he came back. Mounting up and taking a run up on the corner, I leapt up the incline. I’d worked out if I made it to the outer edge of the bend the slope was less severe for the turn and I had more room to gain momentum for attacking the next incline. When the engine started getting bogged down I’d quickly dip the clutch to spin the engine up and let it out again, popping small wheelies over the rubble before losing momentum and balance. I only had to get off one more time to push and, mounting up once more, I shot out from the last incline onto an established track that seemed parallel to the South Yungas road at a higher level. Or it could have been another section of the South Yungas that looped back to join route three, not far away.

Less than three hundred metres to the smooth black surface of route three. The sun was now dipping behind the rim of the mountains and I sped as fast as I could toward La Paz, which was 45km/h uphill to Le Cumbre.  The chill of the mountains was getting to me and I stopped at the roadside to unpack my jacket before reaching the cloud base.

Clicking between the gears, I was able to maintain 45km/h as I followed the road up into the clouds, each hairpin revealing headlamps descending out of the mist. Eventually, the road began to level off and the clouds began to clear before the descent into La Paz. The traffic was building as I was nearing La Paz but the sky seemed brighter although the sun had already set.

In the fading light, the city lights lit up the far slopes of the canyon and the potholes became harder to pick out of the streets. I followed the bobbing tail lamps of the busses and taxis. I fight my way through the gladiatorial taxis street by street, checking the route every few minutes until reaching the hostel. I drop my helmet into reception and power the bike up over the step and through the doors into the lobby. 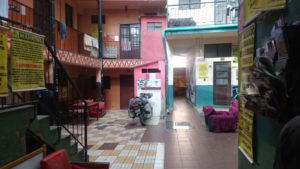 Gabby the receptionist welcomed me back and said “Your face, es negro.” I just said “Si, South Yungas Road…” Gabby nodded politely and gave me the same room I had before and I dragged my bags up and washed before going out to refuel on empanadas and a coke.

The day had been hard going right from the off. Slow, dry and hot through clouds of dust, battle against gravity and mountain cold, fighting city traffic in darkness squinting through dirty glasses and visor.

The uncertainty of it all wasn’t fun at the time but looking back on it at dinner, it was. Especially as my hands had warmed up and the memory of the damp, cold mountain air was now history.