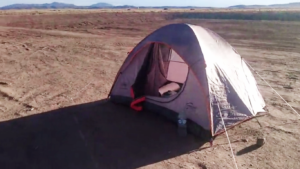 I AWOKE AT four unable to get back to sleep for the cold. Not as cold as Titicaca but still not comfortable and the sun was still more than two hours away.

The light came before the warmth. I lie in long enough to reach a comfortable operating temperature. The entrance to the tent faced further south than the sun rose but was just right for the rays to land on my feet. Going by yesterday’s progress, I should be in Cochabamba by three.

I packed away the tent and was on my way by half-past nine, leaving only tiny holes in the compacted earth where the tent pegs were hammered in. Leaving this excavation, I noticed a local man with a traditional sack over his back watching me from the other side. I ignored him and rode out to route 4.

Route 4 was under construction and I swung right onto the smooth new surface away from Corocollo and toward Cochabamba.

I had over half a tank of fuel on the gauge but wanted to top up to be sure of reaching Cochabamba. Instead of returning to Caracollo, there was a fuel station marked 14km down the road outside Caihuasi.

Route 4 is a half completed dual carriageway, one side a scar in the earth busy with construction machinery, the other, pristine slate grey asphalt. I could see no traffic in either direction as I carried my momentum up the earth verge and onto its surface. It felt like I was riding down an airstrip. During the night I heard the almost constant distant roar of trucks passing by but now, nothing.

I’m making good progress in the bright cool morning air. A sign up ahead “Desvio” and I’m diverted onto bare earth and rock. Once again trucks, slowed down by the coarse surface, whip up the Bolivian dust into my face and I pass them as quickly as possible. 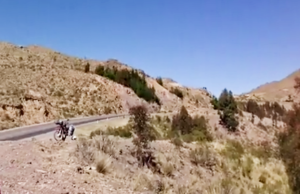 I pass through Caihuasi and spot the fuel station on the edge of the village on my right. Problem is, the access has been bisected by the carriageway construction. Even if I could cross it, the station is closed and unattended. It would be tight making it to Cochabamba with what my fuel gauge had to offer. It depended on how much up, down, rough, smooth and gear changing would be involved. All I could do was watch what happens along the way.

The flat plains are behind me now and I’m winding around the mountains, no sign of an end to the road construction as I roll on and off asphalt, earth and rock. Eventually, I would be over a thousand meters closer to sea level but if I was already on the descent, it was disguised by long winding ascents and fast sweeping descents.

The journey is an ecological education as I see black billowing diesel fumes belching out of the trucks struggling to climb the mountains and various selections of cans and plastic packaging flying out of bus and truck windows to the side of the road. I decide that the eco-warriors in Europe are onto a losing battle since from what I’ve seen so far, most South Americans just don’t care. The same as I noticed in Egypt and India. Egypt and South America not only have pyramids and sun gods in common, they also have discarded tyres, plastic bags and polluted air and water.

It’s past lunchtime and the fuel gauge is now below a quarter with 90km to go. It’s not looking good unless either I find a fuel station or I crest the mountains and find a long downhill gravity assisted freewheel down into Cochabamba.

At the crest of a hill, buildings line the road set discretely back allowing a generous flat verge. Shacks and ramshackle stalls that constitute a village, of sorts,s and I catch sight of a wooden panel ‘Gas y Deisel.’ No pumps, a simple sign leaning on a wall. I overcome my innate urge to press on and never go back and slowly make a U-turn and cruise a hundred metres back to the shack.

A woman in traditional costume replete with the traditional bowler hat comes out to ask if I want ten litres. No, five I say. Thirty Bob sounds expensive but it’s two per litre less than I paid in El Alto, probably because she ignored checking my licence plate for the international rate and inflated the domestic rate for her own benefit. Fine by me. She disappears behind the shack for a minute returns with a gallon can and a funnel and empties the fuel into my tank. I can relax now, my gauge now creeps to over three quarters as I accelerate out of the village. 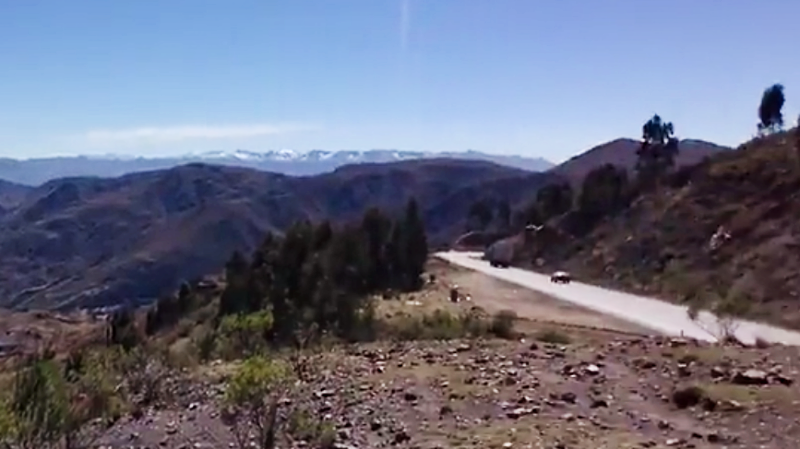 I’m over the peaks now as I can see far into the east, the mountain peaks, islands in a hazy white sea as humidity… or smog… and I can see I’m now a lot lower than the snow line on the distant peaks. The air becomes noticeably warmer as the day progresses. The heat of the day is accumulated and reflected around the mountain passes and aided by gradually reducing altitude.

80km/h, downhill leaning the bike over round smooth dusty mountain bends, I’m home and dry and roll through the toll plaza into Suticollo, 35km from Cochabamba. The dual carriageway runs north through the town. Stationary 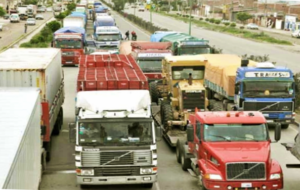 trucks, a queue of unknown length, as I start to filter down the middle. The trucks become less organized and block my way. Doors are open and drivers are missing and I weave on and off the verge. Progress is slow and I notice a gap in the central reservation and pass through to ride down the opposite carriageway. A handful of vehicles pass the other way, southbound and I continue a couple of miles past the queue to another blockade and sit with the motor ticking over considering my plan. To my left is a restaurant, in the shade of the early afternoon sun and I turn off the road, park the bike under a tree and take a table on the patio in front of the restaurant, order some lunch and scroll through the map on my phone…

There is an alternative route across the hills. Retracing my route south to the gas station marked on the map, I take the left turn east into the cobbled street past the houses, under the security barrier, over the railway line and south onto the trail. The oncoming minibuses and trucks throwing up dust clouds confirm I’m on the right track. An impatient Hummer overtakes me and I follow it in the thinnest part of its rooster tail of dust to the turning to the zig-zag up the hillside. The track crests the hill and gently descends the other side. Boulders are strewn across the track from rockfalls down the adjacent hill to the left. Between the boulders are old tyres and trash. The trail appears to double as a refuse site, Household items and tyres, mainly.

Eventually, I emerge in Quillacollo and Maps.me guides me to the main bridge across the river into the town toward route 4 again. Another blockade. Minibuses parked on the bridge unable to cross. A crowd of people in a huddle and boulders rolled across the road. I turn around and continue along the river bank fifty metres to another dirt track. A pedestrian suspension bridge is to my left, maybe a metre and a half wide, wide enough for the bike but blocked by a flock of llamas and their shepherd at the entrance to the bridge. We speak but don’t understand each other and I turn back along the river, past the blockade to an identical pedestrian bridge. This one free of life forms. I ride up the path, up the ramp and over the planks.

A man joins the bridge on the far side and squeezes up to the side and I edge past with a tentative “Gracias”.

At the far side of the bridge is a recreational park. Families are scattered throughout enjoying the swings and roundabouts and I ease the bike down the slope next to the stairs to the bridge and down the assorted steps in the par between me and the road. 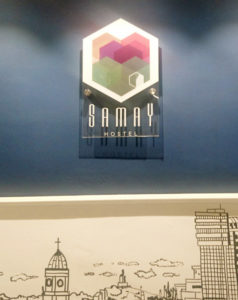 Route 4 through Quillocollo is busy but not congested making it fast and furious between traffic lights and I make good progress to Cochabamba. Avenida Heroinas is a different story. Four thirty pm is peak traffic. More traffic on a narrower carriageway. I blend in with the taxis and steadily progress east toward the Cristo de la Concordia, a big white Jesus on the hill, larger than the Rio de Janiero statue, clearly visible in the distance. I was bound for the Samay hostel a block away from the Cristo teleferico. I’d use that as a waypoint.

Five pm and I arrive at Samay cheating the one-way system to get to the front door. It’s been another hard dusty ride, a contrast to yesterday’s long boring, cold stretch along the straight, flat, Andean plateau. Despite the problems today, it was fun looking back. Journeys like this feel like a real achievement. 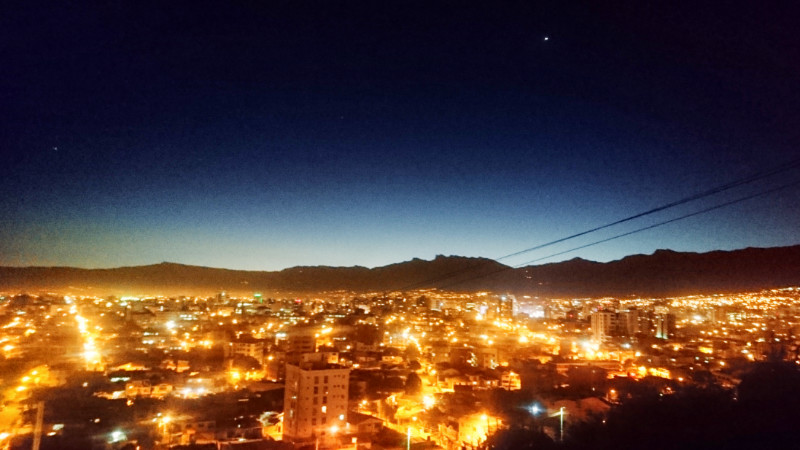