The Circus Hippies of Samaipata 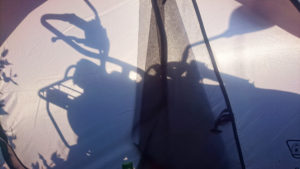 THE MORNING BROUGHT the eastern sun to project the shadow of the bike on the tent wall and I was gently warmed out of my sleeping bag. The night had been chilly but nowhere near as cold as the Altiplano. I drank water but ate no breakfast then decamped at leisure, making sure I left nothing hidden in the leafy undergrowth and hit the road shortly before ten. I only made a hundred km yesterday an I had two hundred and fifty to do today to make Samaipata. It could well mean another night out in the sticks.

There’s a dilemma with catching up a slower bus or truck. Either hang back out of the rooster tail dust cloud being whipped up where rubber meets dust or plunge right in and hope there is an overtaking opportunity pronto. There was a good mix of asphalt and dirt track between the intermittent road works so hanging back until the surfaced roads was my adopted strategy, confining dust between sweaty-neck and laundered collar. 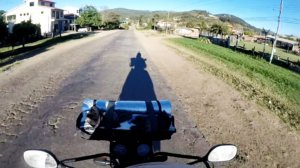 I made good progress and my lengthening shadow led the way into Samaipata shortly before sunset. El Jardin is its name: the camp-ground recommended by Marwa at Samay. She said it was up the hill from Jaguar Azul, which is 0ne possible description of where I was, looking at the map for its location. A guy on a motorbike pulled alongside and spoke some Spanish and I recognised the words Jaguar Azul. “No, El Jardin,” I replied. He thought for a minute and indicated to follow him and so was led to the gate of El Jardin Hostel. 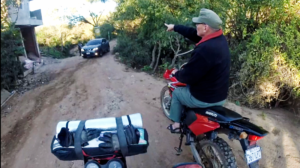 El Jardin has a rustic self-sufficiency feel about it. Cobb walls with bottles inset to make multicoloured windows. The young volunteer booked me in for two nights and introduced herself. “That’s a nice name. Easy to remember” I said, and forgot what it was by the next morning. It wasn’t a problem as I never saw her again.
The crazy-paved steps, strategically spaced for giants of a 97cm stride, led down to the dorms and the lawn where half a dozen tents were already pitched. An assortment of dreadlocked circus hippies were juggling and warbling along to a 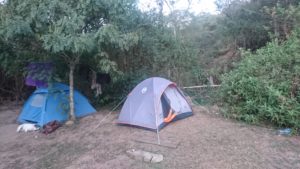 guitar. I picked a spot as far to the end of the lawn as possible not noticing that the French couple next to me had a dog that would favour laying in the shade of my tent during the day and chew a bone not far from my ears in the middle of the night. “Bonjour,” I said as I was pitching the tent. After a glance at me for a second, they turned away, silent.

The campground nestles in a small valley with a dirt track curling around the north and east perimeter as it fords the stream that also runs through the site then over the track. The incline meant that all the plentiful motorcycles that passed in the night would open up their throttles to climb the hill and give us the benefit of their musical engine notes.

In the peaceful interludes, chirrups of treefrogs and croaking from bullfrogs sang me to sleep, accompanied by random percussive dog-tooth on bone rhythm.

Rain woke me up at dawn. I emerged from the tent to a damp cheerless grey sky, reminiscent of a British October. The intermittent showers and the unbroken clouds kept the blanket of gloom throughout the day. 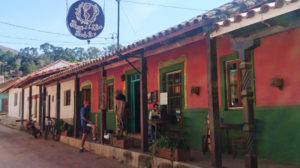 Samaipata is about the same size as Coroico but has readily available WiFi – and is without the steep streets. Breakfast at La Chakana on the main plaza quickly became my regular treat. Round the corner at Tierra Libre, they were showing the World Cup games. Tomorrow would be England v Colombia. Normally, they are closed Tuesdays but the wife of the owner is Colombian and they would be opening for the match.

13:55pm the next day, and Tierra Libre’s doors still sports its big brass padlock. Across the road is Gyros bar and nightclub. I can hear the sports commentary booming through the half-open doors at a volume that creates a pressure wave to prevent entry. A minute later, the owner and his family turn up and the Colombia supporters milling around the street, and me, gravitate toward the opened door and jostle around the restaurant to face the screen.

A tall European man introduces himself to me. His name’s Bert from Holland who married a Bolivian woman and opened the Serena hostel up the lane from El Jardin. He invites me to drop in for a cup of tea. 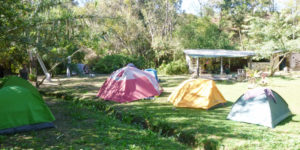 The circus hippies at the El Jardin are as warm and welcoming as a fish pond in February. I approach a Woman wearing a floral dress sitting in a deckchair slurping soup from a spoon and attempt to break the ice. “Hi, where are you from?” She turns to face me. The face is in its late forties or late fifties with a cotton pad taped over one eye and answers in a deep German accent “Where are any of us from?” and I notice the two or three-day stubble on his/her face. The question was intended as an introduction: an extended greeting, not an existential inquiry. I wish him/her Bon appetite and climb the oversize crazy paved steps in suitably long strides towards La Chakana.

A warm and bright afternoon becomes the perfect opportunity for a ride out to the Ruinas del Fuerte, an ancient fort on a hill about 10km away. I turn off the main road and begin the winding ascent into the hills and the bike jerks as I’m leaning into a left-hand hairpin and I lose drive. It felt like I’d leaned over with the side stand down but I’d been around too many bends already for that to be a possibility. No drive, I coasted to a halt then glanced at the rear sprocket. The chain had come off but appeared to still be connected to the concealed drive sprocket and so was easy to put back on. I adjusted the tension to the full extent of its travel. It’s time for replacement really but I’ll run it a bit longer and squeeze some more life out of it.

The time was 3.30 by the time I got to the fort. The ticket seller checked her watch as I made the purchase and I guessed I still had time to wander around the circuit. Two men were playing cards and one asks if I need a guide. I said no. Mini-Machu Pichu, someone described it. Not how I would describe it though. The treasure of this place is in its history. I guess I needed a guide. Deb would have loved this. Ideal National Trust territory, but without the drizzle…

I get back and book a third night at Samaipata and feel it’s enough, I’m done and I’m happy to leave the circus hippies in the garden. One more breakfast at La Chakana with the loaded bike parked where I can see it from my table and then ride to Hostel Serena for the promised tea. I meet Bert coming down the lane on his 250 motorcycle and he tells me to let myself in at 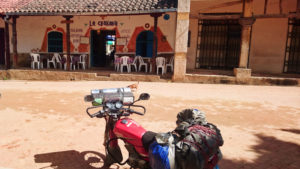 his hostel, he’ll only be 15 minutes. Hostel Serena is an immaculate place with views over the Samaipata rooftops. Camping here costs twice El Jardin but includes breakfast. Adding El Jardin to La Chakana brings it on a par… The place feels like a retreat for unwinding. I was tempted to stay but reluctant to unpack the bike again and so I stuck with my plan toward Las Cuevas on the way to Santa Cruz.