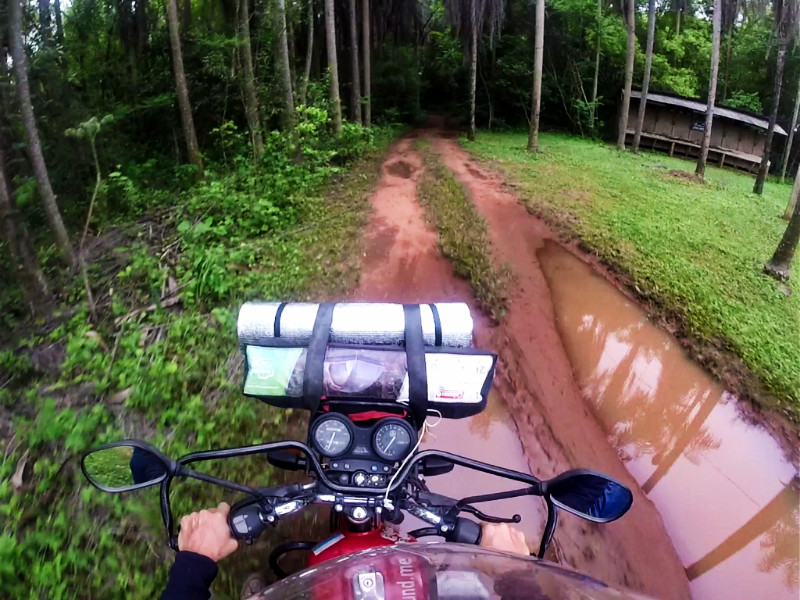 THE STORMY DAY at Pousada Zamora was followed by bright, dry morning sunshine. Young people were at breakfast. Leonardo, Marisa’s grandson took an interest in the bike and my trip. He could speak a little English so I was a little later leaving than I expected. The forecasted thunder looked absent if not late arriving. In the United States, they’d call it “partly cloudy.” And I set off with my rain gear firmly packed away. 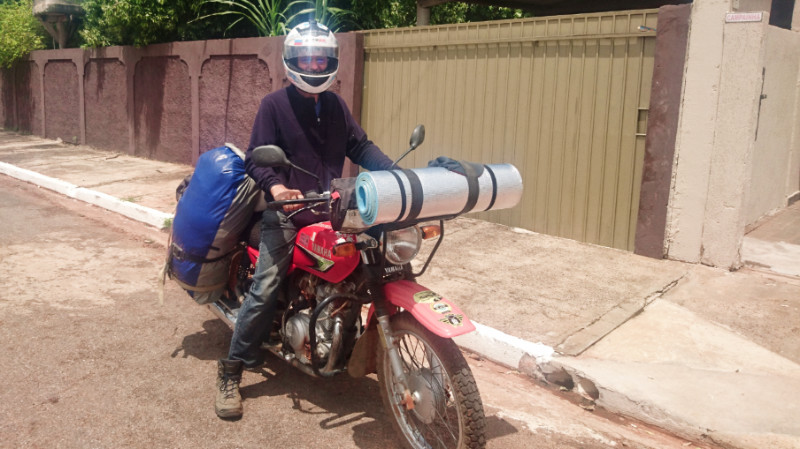 The roads are straight and smooth and farmland stretches to every horizon. Gigantic silos dwarf the Juggernauts waiting to be loaded with whatever’s in them. Villages are few and far between. Vista Alegre looks like a frontier town but presents me with a modern fuel station just at the exit before releasing me onto asphalt bisecting more flat farmland.

Ponta Pora condenses out of a steady accumulation of farm buildings, stores and warehouses so as its hard to notice when you’ve actually crossed the city limits. I pass a couple of hostels along the busy street and dip into Tompell to ask the rate. It’s 80R and not as nice as Zamora. I say I need to go to Migraciones and might be back later. 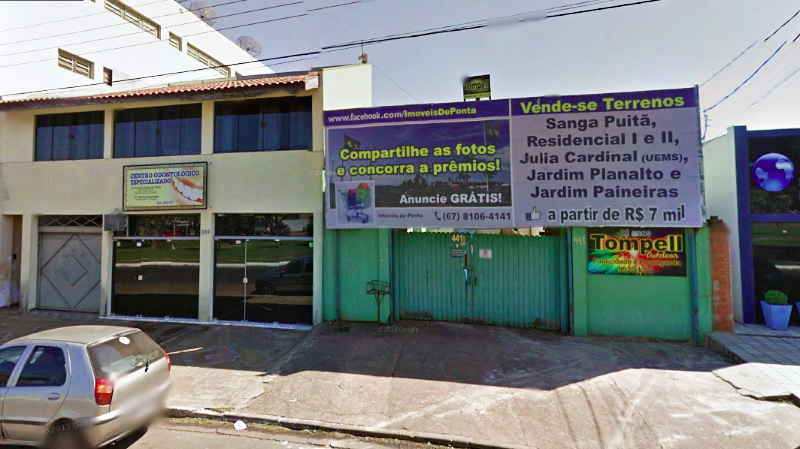 I need some WiFi to search for accommodation and soon reach the giant malls that the Brazilians invade for cheap tax-free electronics. The border is simply a line on a map – invisible in this merging of two towns. there is no border control at all and the malls stand with their toes on the border beckoning the overtaxed Brazilians with their quality discount fare from China. Burger King embeds itself in a parade away from where I can watch the bike and McDonalds ideally placed is bulging with impenetrable queues has a strong WiFi signal radiating across the car park, unfortunately, locked down by a password.

I start back to Tompell and find a small local cafe and ask if they have wifi expecting a “Nao” and get a “Sim.” I order what looks like empanadas from the small glass cabinet beneath the orbiting flies and grab a coke from the glass-fronted fridge before logging on sifting the web for other hostels. There’s a campsite 10km north but I want to be closer to town for dealing with the border crossing. I settle for Tompell and make my way back to cough up the 80R.

Bruna speaks no English but is charming and polite. Extras have a price here; parking, towel, snacks stacked in the wardrobe. I just take the parking and ignore the small luxuries. I have a dingy room with a bunk bed and barely functional ensuite. The window looks across a metre and half wide path to the concrete wall of the neighbouring building.

Bruna tells me there is a public holiday today and tomorrow and Migraciones might be closed. 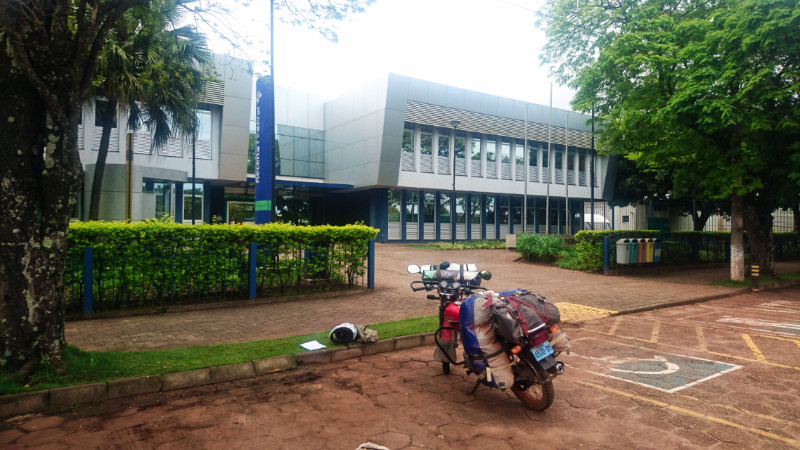 Although the hostel is close to the main road, my room is quiet and I get a good night’s sleep. In the morning, I use up all the time before the noon check-out transferring cash between cards ready to withdraw from ATMs in Paraguay. I decide to ignore the holiday warning and head to the first stop Brazilian Immigration at the airport 2km away. a solitary figure in a booth in an empty terminal is the man I’m looking for. Entrada o Saida. Saida… Asuncion. Stamp and I’m off to Aduanas near the Frontier Hotel. We fumble with language a while and I receive an exit document for the bike. 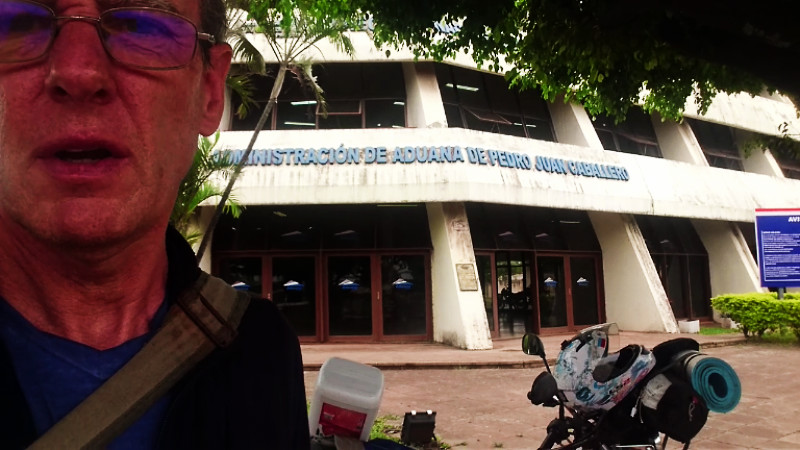 Next Paraguay Migraciones near the China Mall. Stamp Vamos and finally to Paraguay Aduanas to await their Siesta. Apparently, this side of the road, in Paraguay, is an hour ahead so it cuts an hour off my wait.

I follow a stocky cheerless lady upstairs to an office decked with mahogany cupboards like something out of the 50’s, beneath computer equipment like something out of the 80s. She asks how long I intend to stay and reply 60 days showing six fingers and she says no there is a maximum of only three months. I’d stumble on a strategy for getting the maximum allowance, so I say OK and stand quietly while the agent completes the form in blue biro before handing me a carbon copy. 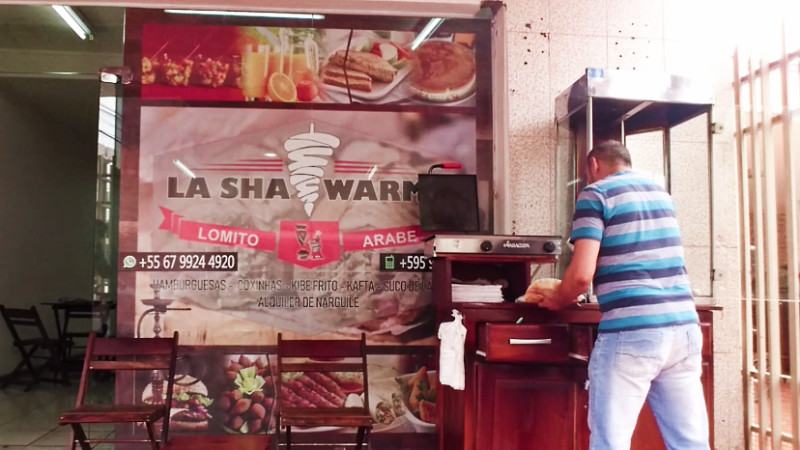 Customs (Aduanas) don’t like dishing out the maximum visa period and sometimes cut back to 30 days. By cheerfully saying 6 months from now on, the agents might still feel a win by telling me “No, you can only have 3 months.” 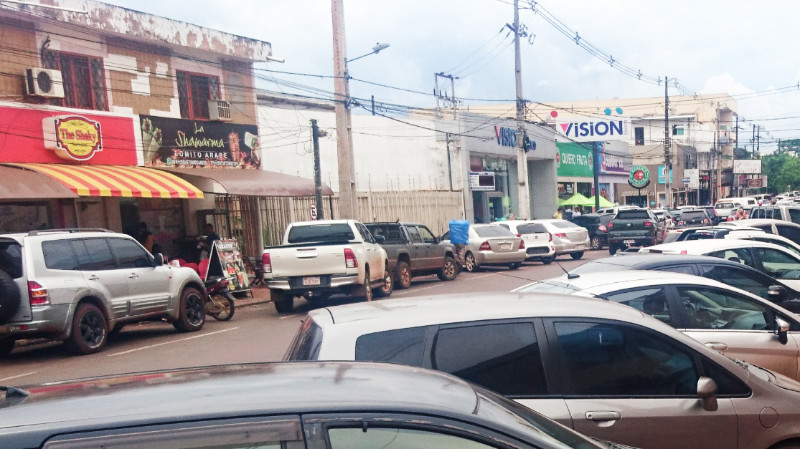 By now it’s mid-afternoon in Paraguay and just after lunchtime over the road in Brazil and I settle down for my first lunch in Paraguay, a schwarma on a busy pavement outside a cafe. Cerro Cora is only 40km Southwest. I read about it on ioverlander. A free campsite in a national park. and after lunch, I weave around the grid of Pedro Juan Caballero toward Route 5. Once on the road, I click up to top gear and sit on the straight flat road reeling in the miles toward Concepcion. 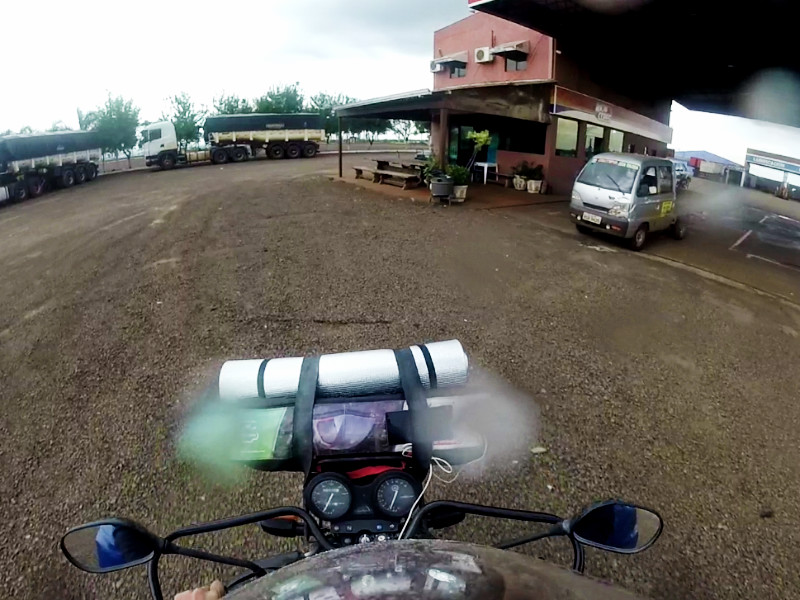 The clouds to my right loom big and grey but don’t look capable of more than a threat of rain but a few specks drive me into the shelter of a gas station and cafe a minute further down the road for an Empanada and Coke. The threat comes to nothing, the clouds, impotent and silent, pass quietly overhead revealing the fluffy silver blanket at higher altitudes. 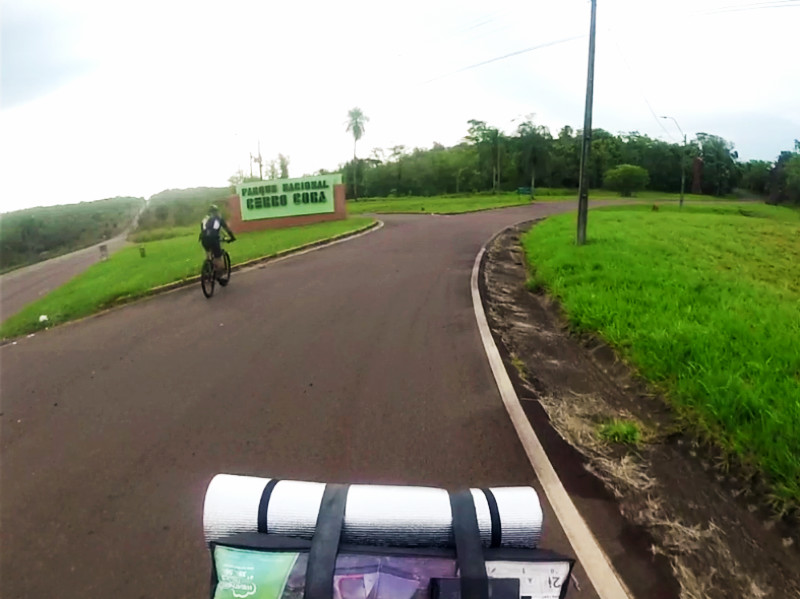 Cerro Cora has a visitor centre with a little man that appears out of thin air to attend to anyone wandering in. Naturally, he speaks no English but hinting to my camping arrangement parked outside, he gets me to fill a form and shows me the map of the area. I ask who the portrait of the imposing figure is, dominating the museum wall and he points to the Spanish text beneath. I look at the picture for two seconds then leave. 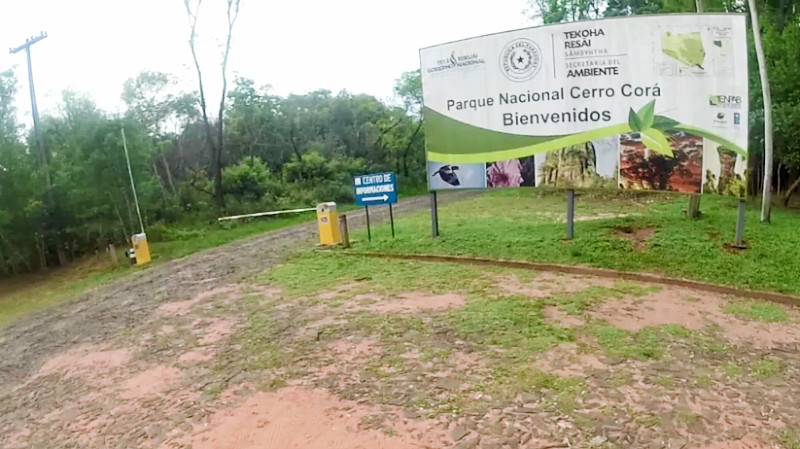 The 4 cyclists I passed on the way in bustle around my bike jabbering in supersonic Spanish. They’ve cycled 40km from Ponta Pora and decided to camp here in the park. We chat a little best we can and they set off along the cobbled track. I pass them on the first campground, which they appear to settle for and take off further into the woods along a narrow toward the river. 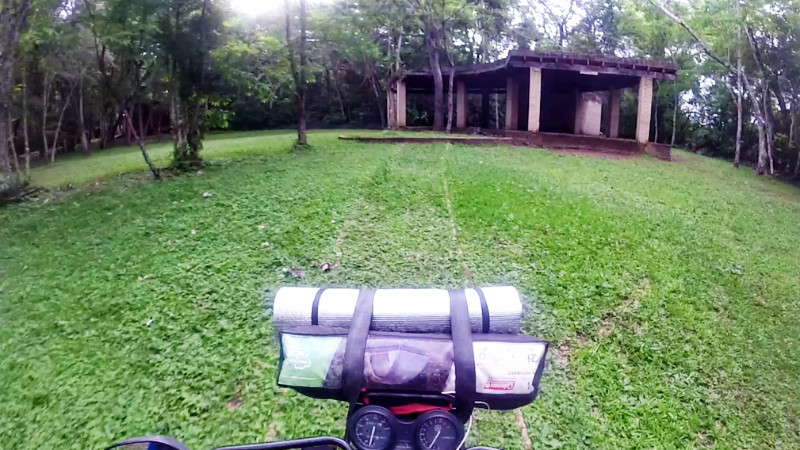 It’s near feeding time for the biting insects and I quickly get the tent up in a small glade by the river. I’m glazed with sweat and the humidity prevents cooling by evaporation. My sweat feels more like cooking oil because of it. The shower block is a hundred metres away but do I really want to shower with a thousand alien species from the insect world?

I dive into the tent before dark and spray the interior with insecticide. It makes me cough and can’t be healthy but better in here than being eaten alive outside. I peel off my t-shirt and strip down and lay down to try to keep as cool as possible before quickly falling asleep. The coolness of the early hours wakes me up. My clothes are cold and wet but I put them back on hoping my body heat will dry them out. The fleece blanket beneath me is clammy too but I wrap it around me anyway. I hadn’t bothered unpacking the sleeping bag and use it as a pillow instead, subscribing to neck ache the next morning. 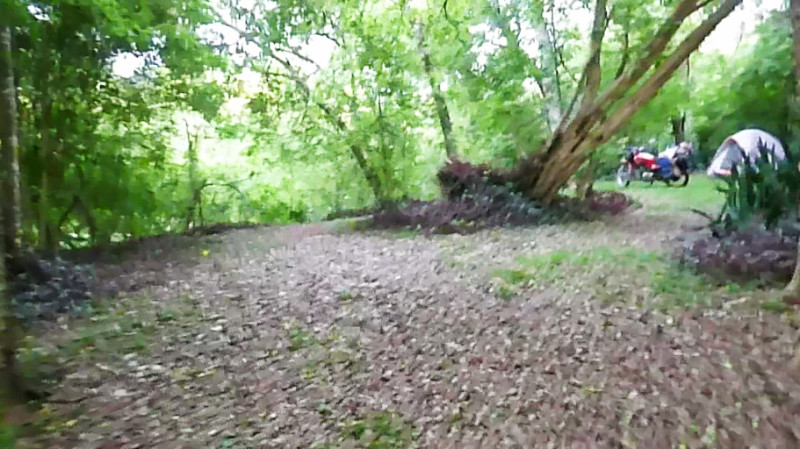