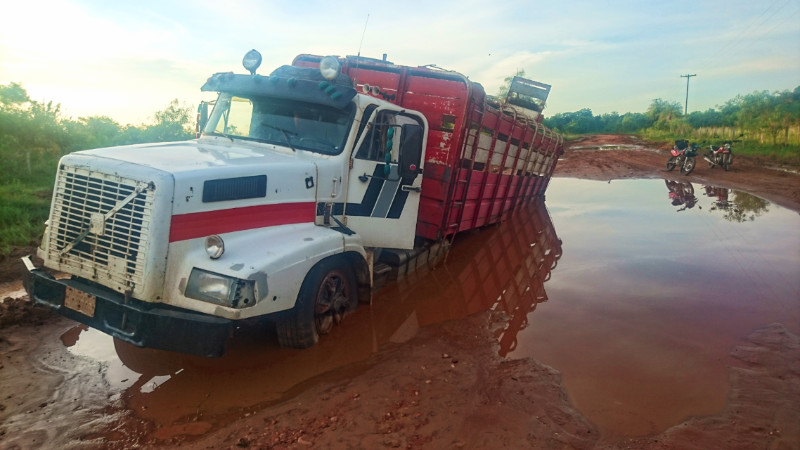 SUNDAY IN BELEN is a day for sitting back and doing nothing. Much like any other day except the shops are shut. John and I planned to head south, cross country, to San Pedro the following day so I took my time adjusting the chain and head bearings, topped up the oil and packed away the things I didn’t need overnight. The recent storm produced a rumour that the road to San Pedro was now impassable so we took a ride out to check the first few kilometres ourselves

Just outside the village, a bridge crosses the river and two locals were busy fishing off the middle of it. John asked, “How’s the road to San Pedro?” The young man replied that his sister had taken the bus that direction three days ago and hadn’t been seen since. John asked if there was another bus that could take his wife, leaving them chuckling before we continued down the track.

The dirt road was slippery with scattered puddles of unknown depth but we found it manageable – even fun. A few kilometres down the road, we happened upon a truck in a large puddle, listing with its back wheels submerged deep underwater. The truck looked abandoned but as we dismounted to take a closer look, a man opened the driver’s side door and jumped down at the water’s edge. 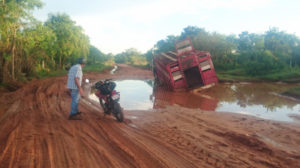 John spoke with the driver for a while and he and the driver looked at me. John said, “He asked what you think about Jesus… please say something nice.” I replied that Jesus was “The One!” and left it at that, with it not being a topic I like talking about, but my comment seemed to smooth over an awkward moment as he vigorously shook my hand.

The driver had been here living in his truck already five days. A JCB had failed to pull the truck out of the puddle but the trailer and truck’s cargo of cattle had been rescued early on. He told us that the road was not too bad for twenty-five kilometres but the final stretch to San Pedro was impassible and we should turn left after about seven kilometres, northeast toward Tucuati lying directly east of Belen. 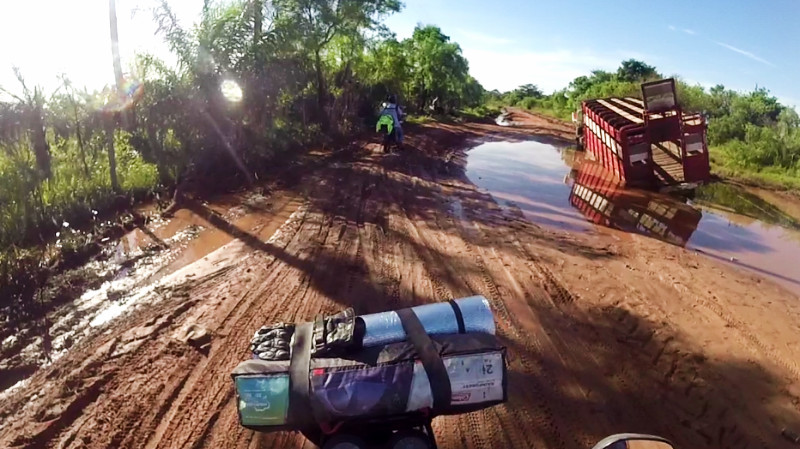 Monday. We set off to Tacuati stopping briefly at the stricken truck to leave the driver some beer for company. Onward we rode over varying surfaces of red, wet and dry dirt track. Having been running around on an unladen bike for a week, my steering now felt heavy and lethargic with the weight of the tent on the front. The bags strapped on the back added some weight but I made good progress bounding over the potholes and slithering through the mud. 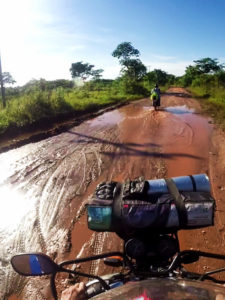 A wide puddle bisected the whole track with water and mud. John rode into the mud and got stuck in the middle about twelve feet in and 8 inches deep. I paused behind. Looking at the brown water, the truck tyres seems to enter at a shallow angle so I rode along a tyre track through the water trusting there were no potholes lurking beneath the surface. The water was no more than about 8 inches deep at the centre and I coasted through smoothly to park the bike on the other side. John signalled me for getting a push. The thought of wading through thick claggy mud wasn’t too appealing but there was no other option unless I simply rode off.

The thick, sticky mud gave a little support and my feet only sunk in about four or five inches. Gripping the rear of the frame and standing out of the line of the spinning back wheel, I leaned my weight forward with the bike and helped John creep the bike across to the water with the back wheel ploughing a deep trench in the slime as it dug in looking for grip and not finding any until reaching the water. With John out of the trench and now taking off down the track, I washed as much of the terracotta clumps off my boots as possible and rinsed my hands in the orange puddle, leaving my hands with an earthy fake orange tan. 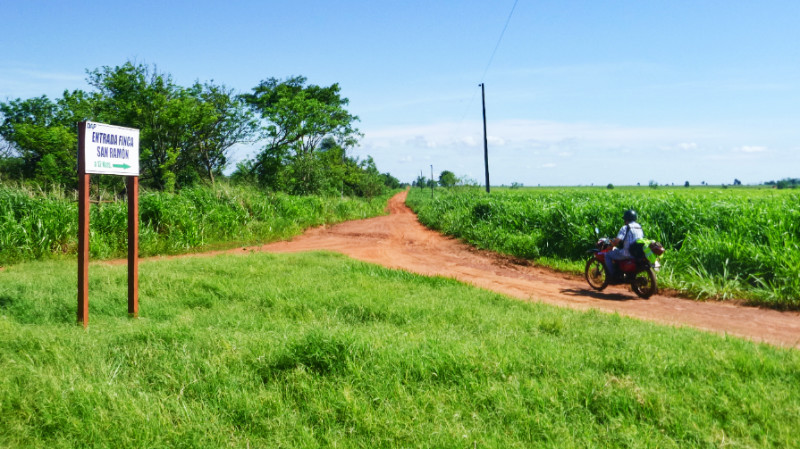 By the time I remounted the Yamaha, John was out of sight but I continued at my own pace knowing that if there was a junction – or shade – he’d wait. Squirly tracks on the margins of the track showed that we weren’t the only riders struggling to stay upright.

When I caught John up we began riding on increasingly dry surfaces. Even though it became dustier when cars or trucks pass, I felt grateful for it. Following John along some truck-tyre tracks, he moved to the right to make way for an oncoming Lorry and lost control in a sandpit swinging left and right losing front grip before the bike finally went over. I helped lift the bike. Apart from some cuts on his leg, John was OK but his flat battery meant he had to manually kick the engine over a dozen or so times before it rebalanced the drained carburettor and fired into life. 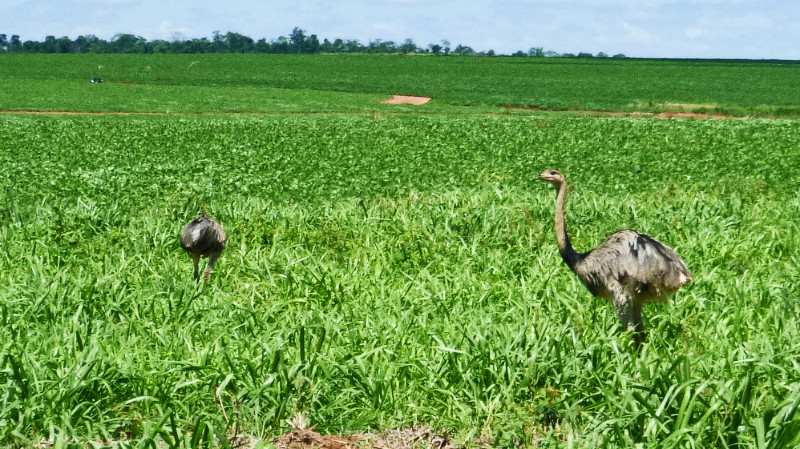 We continued over the corrugations, gravel and potholes at a more or less steady 40kmh and I reflected that I’d been on the road for over half a year and, apart from dropping it while stationary, had not come off yet.

The countryside transformed suddenly from wild brush and woods to mega agricultural fields, fenced straight and true, fringed with modern buildings with immaculate lawns. We could have been in Europe or the US. The red road remained dry with deep patches of fine sand and my bike suddenly went into a weave as the front wheel tried to find grip in the sandy depths. At the same time, the rear wheel lost traction and lurched to the side like it no longer wanted to follow the front wheel. The bike fell over to the right and I managed to step off and lift it fully loaded with some grunting and sweating. My first off.

While I was remounting, I  saw a young man on a moped hurtling towards us in the opposite direction at an impressive rate and thought “I have to see this when he hits that stretch of soft sand.” and he hurtled across the top with barely a weave. High speed is the key, I learned later: like water-skiing, but I dared not try it since the loaded steel luggage rack behind my footpegs would probably break my leg if I came off at speed. The good thing about sand bringing me down is that it provides a soft landing. Paddling along in first gear with my feet off the pegs seemed the safest overall strategy; later defined as “four-wheel-drive.”

Riding along the furrows ploughed out of the track by the tyres of the heavy trucks seemed to be the safest strategy. the ground wasn’t so loose but it frequently put me on the wrong side of the road.

I saw a lorry approaching in the distance and moved to the right well in time only to go into another uncontrollable weave and fall, this time to the left pinning my foot under the left pannier. My leg was twisted under the bike so I turned to lie face-down in the sand to relieve the pain and then to work out how I was going to escape.

Apart from the twist, I wasn’t hurt but I couldn’t move my leg out from between the pannier and the sand. Bringing my right leg over and between the bike and the sand, I used the rest of my body to lever the weight of the bike up enough so I could drag my left foot out. Once out, I managed to lift the bike up before the truck arrived and idled slowly past.

Before the day was out I’d fallen twice more to the left and twisted my ankle again but didn’t get trapped. Four falls in one day all in deep dry sand: my new nemesis.

We had two methods of navigation. Me with the Maps.me GPS app and John by asking everyone we met along the way. I gave up looking at the GPS unless there was no-one about. Asking was quicker and more entertaining.

The Mennonite colonies have immaculate lawns and modern agricultural buildings, a contrast to the native Paraguayan’s laid-back, slap-dash way of life. We stopped at a modern looking store. My greeting to a young blonde blue-eyed girl went unacknowledged another sat outside the store wearing a cheerless expression. The scene suggested the legacy of a Nazi experiment, a bit like the movie “The Boys From Brazil.” but that was just in my imagination. The Mennonites are religious pacifists that arrived in Paraguay in the mid-1920s and helped many other people settle and survive the harsh Chaco. 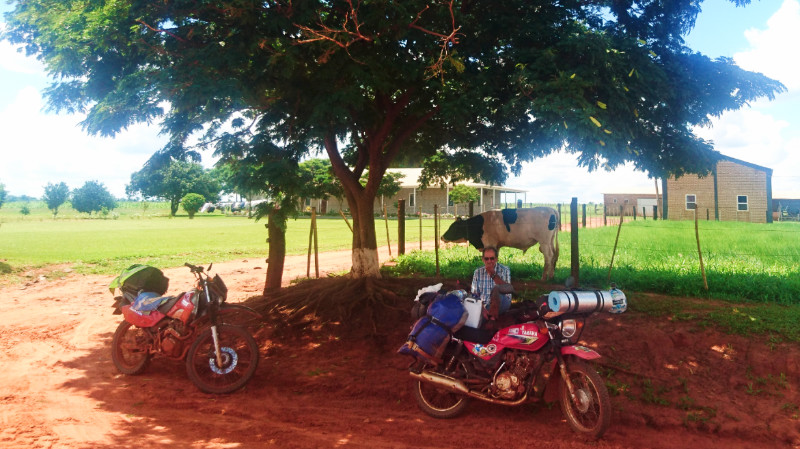 “How many bars have you seen?” asked John while we were sitting under the shade of a tree recovering from my third fall. None! “The Mennonites are workaholics.”  As a result, they drive the majority of the Paraguayan economy. The road through the Mennonite communities remains unpaved with stealthy pockets of sand traps so we took it steady until reaching the junction with the paved trunk road, Route 3, at Estancia Alegria. 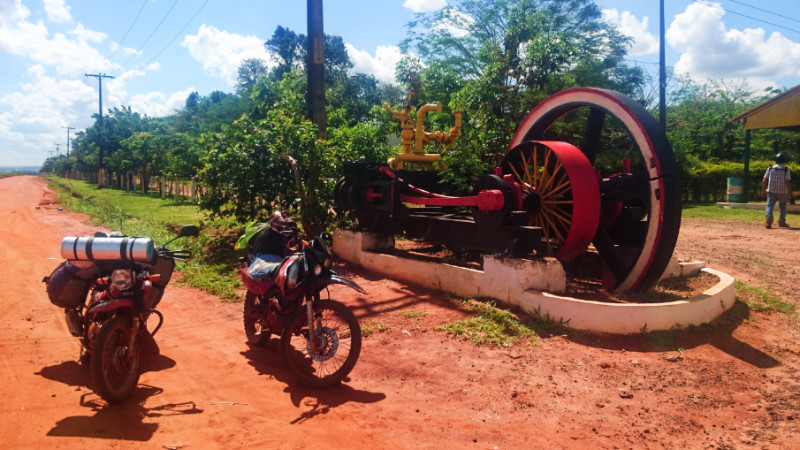 The asphalt gave me a break from the 6-hour slog on the dirt tracks and I happily relaxed with the fast traffic flow along the highway 30km to Santa Rosa del Aguary.  Turning left at Santa Rosa, toward Laguna Blanca. we were happy to discover that, despite the map and Google Satellite view still indicating a dirt track, the road to Laguna Blanca had been paved and even extended to the Brazilian border. This meant that we made fast and easy progress the final 30km and arrived at Ecotur at Laguna Blanca before sunset. 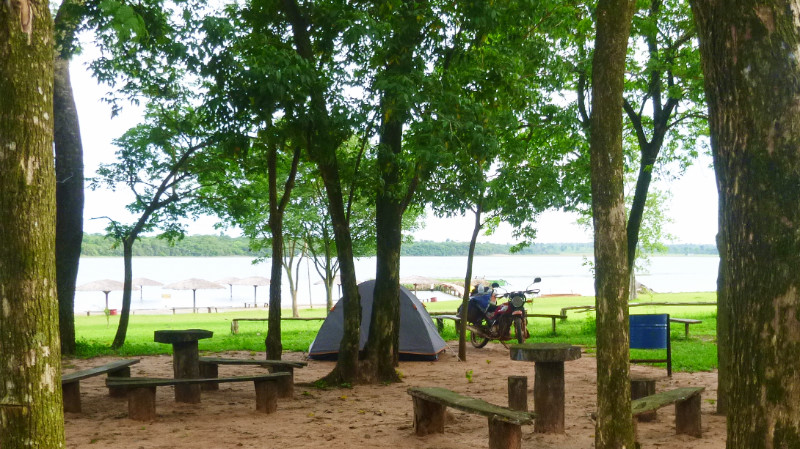 We were the only guests for the night and I instructed to ‘Camp where you like’. John took an air-conditioned cabana and I pitched my tent under the shade of the trees. Only when the tent was up, did the birds start their divebombing campaign. There must have been a nest nearby. “Too late,” I told them. “I’m not moving, you should have said earlier…” 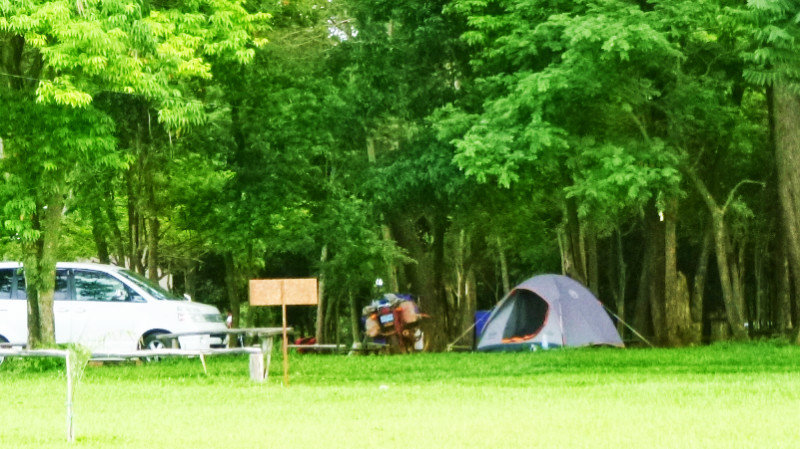 Rough Guide’s “South America on a budget (2009) says:
“Paraguay’s only true lake, crystal clear LAGUNA BLANCA is named for its white sandy substrate visible even in the deepest parts of the lake. Completely unspoilt (the water is clean enough to drink)” 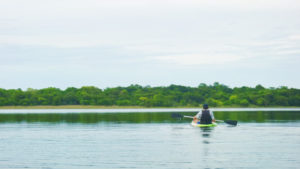 Laguna Verde, I’d call it. The water was now green with algae and visibility poor enough to block the light of the sun if diving more than a couple of feet beneath the surface but it’s still drinkable if you ignore the colour. The water is pumped from the lake to the taps of the campsite. 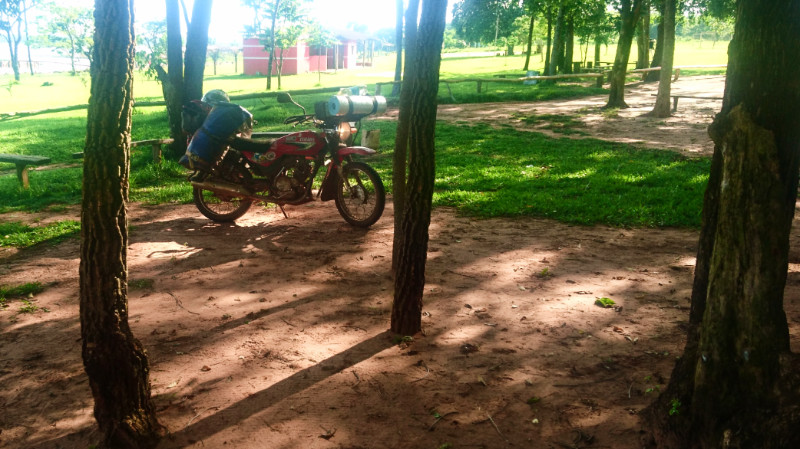 On the shore of the lake. the team at Ecotur were busy hacking back the grassland, dredging the shore and importing white sand for the creation of beaches. I suspected that Laguna Blanca is not quite the natural habitat it once was. Still, the natural remoteness, the breeze through the trees to keep us cool and the quiet tranquillity of being so far from the road made it a nice place to relax for a couple of days…