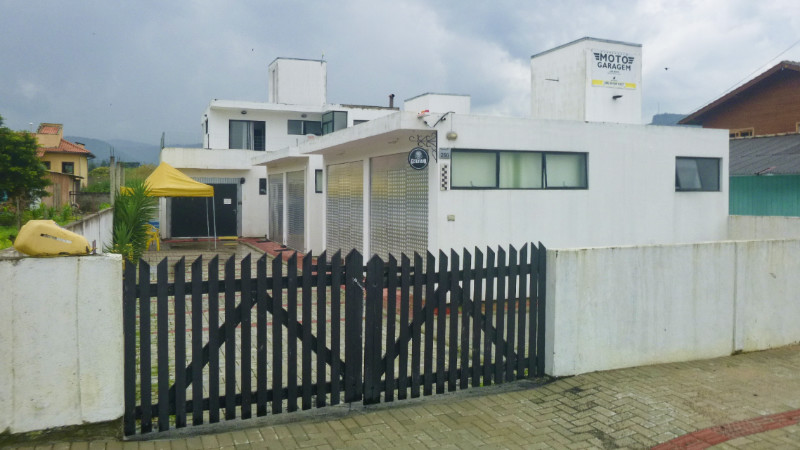 RUBBING MY EYES and peering under the flap into the low, grey misty cloud at the side of the road on the Morro da Igreja, I could be anywhere in the world. There would be no checking the GPS, telling the time or anything phone related. I zip up the flap again and lay back in my sleeping bag recalling the last images of the map. Urubici wasn’t far away. It was my waypoint for turning south to wherever next. Without the GPS and all the other phone apps, The game had changed. 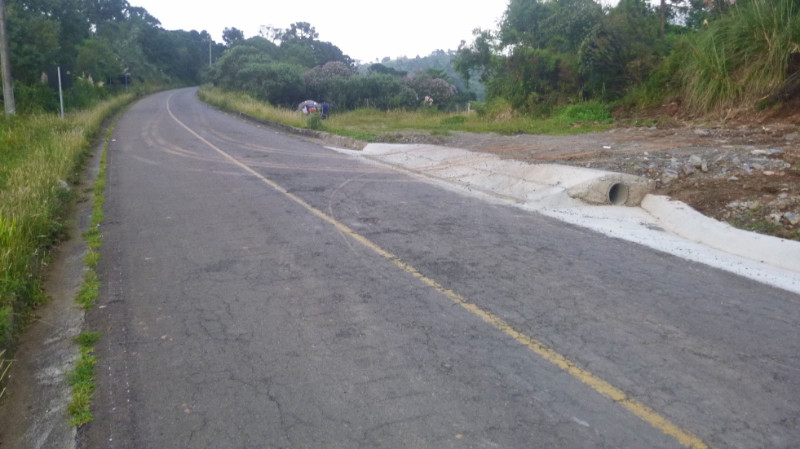 I heard a couple of trucks go by but not much else. All seemed still and quiet on the side of the mountain road. Thinking wasn’t helping me much. I flipped up the lid on the laptop, the screen flickering out of standby into life: “Wednesday 23rd January 8:47am” and I closed the lid again putting it back to sleep. The feeling of boredom finally exceeded the resistance to packing away and I wriggled out of the sleeping bag. 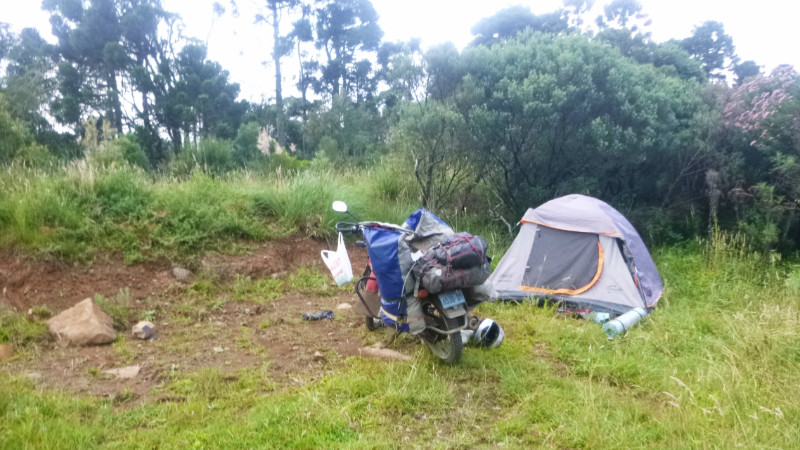 The tent was soaked with dew and my socks and boots had made no attempt to dry out in the damp mountain air overnight and I retrieved a pair of dry socks from a bag so as to ease the discomfort of slipping on wet boots. The tent was rolled away into a soggy roll and the bags strapped back to the bike. After yesterday’s expedition, the bike posed on its stand showing off its adventurous new mud livery, sure it looked a mess but it added to the story of its own life.

SC370 led me to the cobbled intersection a Urubici’s only traffic light within the hour and I turned south to look for a cafe for breakfast. I reached a Plaza south of the town without finding anywhere open and parked up to bask in the warmth of the sunlit park, kicking off my boots draping my socks over the handlebars to dry off. 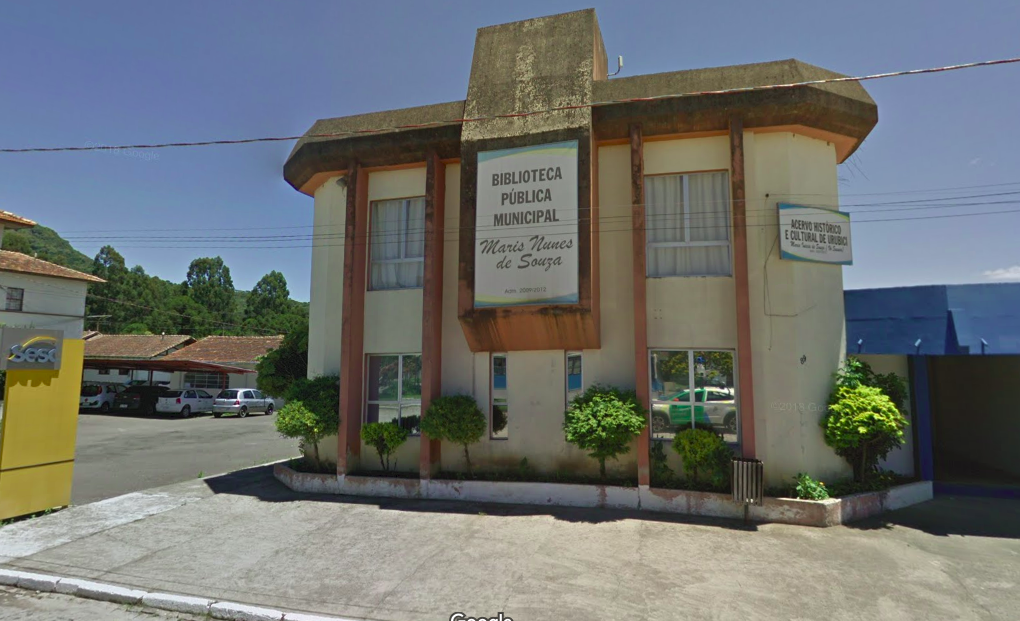 Across the road stood a reluctant looking Biblioteca and I crossed intending to use the Wifi. Inside presented no recognizable library. but a collection of offices and what appeared to resemble a primary school classroom. I asked for WiFi in my best Portuguese and was led and pointed toward the toilets. I thanked the kind lady, washed my hands and face and exited. 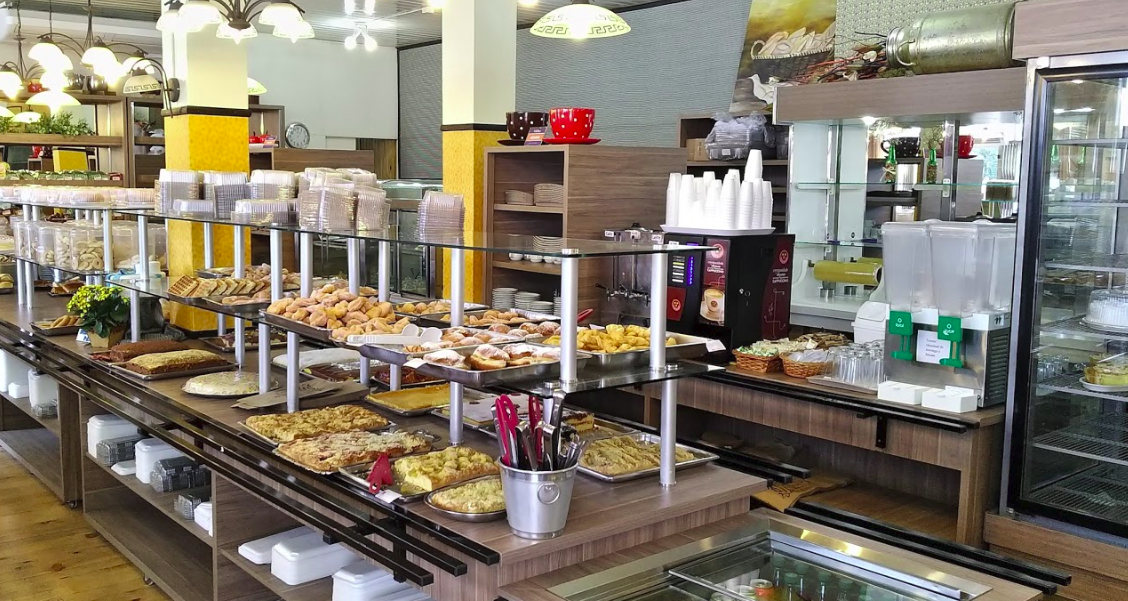 Mounting the bike, I coasted slowly back northward over the cobbles to finally discover a bakery that was open. Coffee and cake for breakfast and, more importantly, WiFi and electricity for my laptop. I wanted to check iOverlander.com and Google maps on the PC for somewhere to stay and to plot my onward route. Life feels a little bit more fragmented without the cellphone but the PC is able to paste over those cracks.

I recalled my truck driving days in the era before GPS. I had developed navigation skills and the spacial awareness that got me out to unfamiliar destinations and back daily. Rekindling those abilities became a refreshing way to ride, extending my perception and experience of my environment. A couple of comments over Facebook suggested putting the phone in a bag of rice to dry it out. 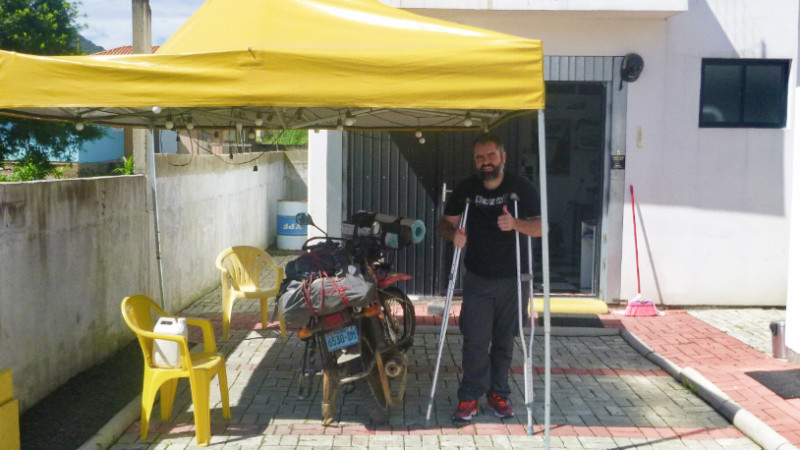 Yesterday’s excursion had worked up a hunger, which the cakes and pastries slowly turned to a sweet, nauseating feeling of excess. I was on my third coffee when Filipe Miranda introduced himself, letting go of one of his crutches to shake my hand. He was curious about the little Yamaha with Peruvian plate and recommended a hostel called MotoGaragem just two blocks away. He said something about closed in the afternoon but I couldn’t work out when. Was it before 4pm or after 4pm?

After a couple of hours in the bakery, I rode to the supermarket to buy some rice, slicing open the bag at the checkout to insert the phone before exiting to continue to MotoGaragem.

MotoGaragem was closed and deserted, although the gate was unlocked. I let myself in, parked and spread my wet things across a bench in the Sun before resting back in a yellow plastic chair beneath the shade of a gazebo in the drive. To the right of the driveway, were what resembled secure storage units and beyond the gazebo stood a two-story chalet with balcony on the top floor.

There was nothing I needed to do and there was nothing available for me to do either. No kindle to read since the phone took a dive but I was happy enough just sitting there, waiting, watching my boots dry while the phone sunbathed in its jacket of rice.

Forty minutes later, A young woman walked through the gate, clearly aware that there was a hostel customer waiting. Filipe must have called her. She unlocked the upstairs floor of the chalet and showed me the double rooms and a bathroom. 70R$ she said. Luxury! I felt I’d earned that after recent events and I put my thumbs up in the universal language of accord. I was the only guest so I felt like I had an apartment to myself. 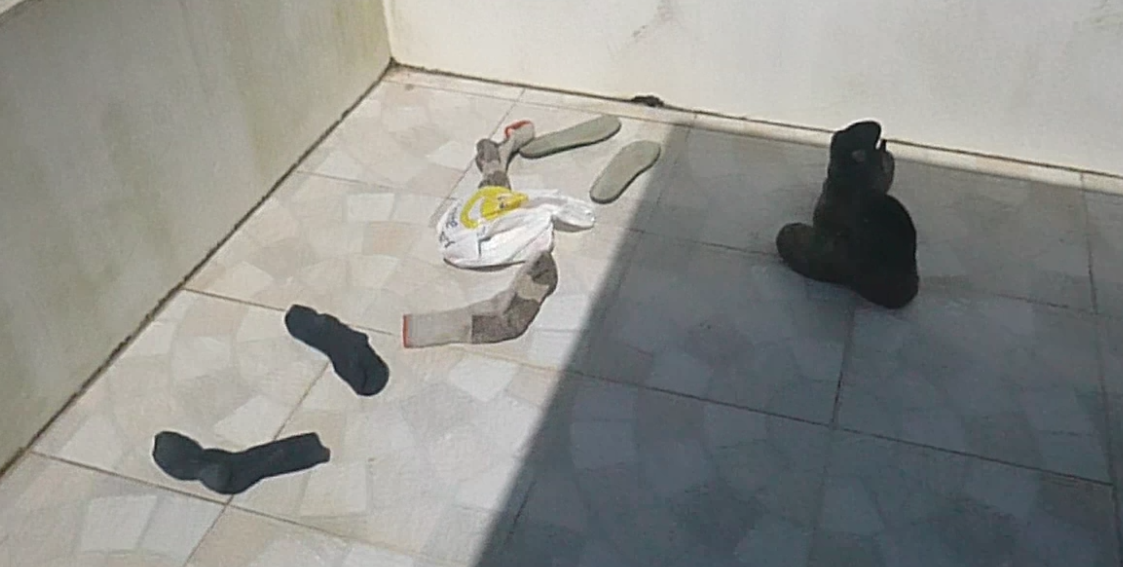 Maria hurried away and I retrieved my socks, boots and bag of rice with phone to spread around the balcony, then spent the rest of the afternoon catching up on the blog.

The room had an air conditioner but with the doors open, a dry breeze kept the temperature a comfortable subtropical level while I sat back on the bed tapping away on the keyboard.

Blogging is a delicate balance between physical travel and using time to create edit so that I have actual material to publish. It feels like a full-time job but for no pay, really. Of course, money isn’t everything but I have to think of how to replace things like drowned phones and continually provide for food and shelter. I feel that the work I do should sustain me but it doesn’t matter what I think. It’s the value that other’s place on my output that determines the return.

Thinking about all that gets too depressing so best to wind it all back to one question: “Do I enjoy keeping the blog?” and the answer is “Yes,… mostly.” Blogging is more than just writing. Administration, collating images and notes takes a lot of time and organisation. All that stuff is not so much fun. Underneath everything, blogging adds a feeling of purpose otherwise absent in simply wandering the Earth.

Later on, I hear voices downstairs, I slip on sun-dried socks and amble into the reception. Filipe is there. It turns out he’s the owner of the hostel. Also, Rebeca Bonel the speed-walker in black I had passed yesterday up on Morrow da Igreja I ask her how she speaks English so well. “Movies.” She’s not the first I met that has learned English via movies – complete with American accent.

Yesterday, Rebeca had wondered where I’d gone after I’d passed her and noticed my bike and tent in the gateway further down the road on her walk. Rebeca translated for Filipe since his English and my Portuguese were so limited.

Filipe leaned heavily on his crutches taking the pressure off his leg. A few months before, he T-boned a car as it suddenly Uturned on the SC 370 breaking his leg in seven places and wrecking his Suzuki V-Strom. He was to be on crutches nine more months. Meanwhile, he runs a graphic design and T’shirt business together with MotoGaragem hostel. 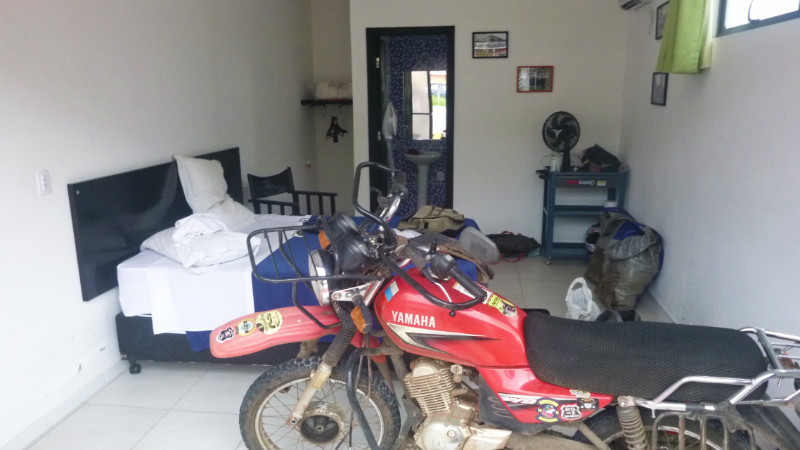 The next day, Filipe offered to move me downstairs to one of the units that hosts a double bed plus space to park the motorcycle. I’m not fussed but accept and make room in the chalet for a trio of bikers from Sao Paulo, which I think is the real motivation. It felt strange sharing a room with the bike but I liked it. A proper man-cave and I sat back on the bed surfing the internet while the bike rested on its main stand in preparation for removing the front wheel for troubleshooting the speedo fault. 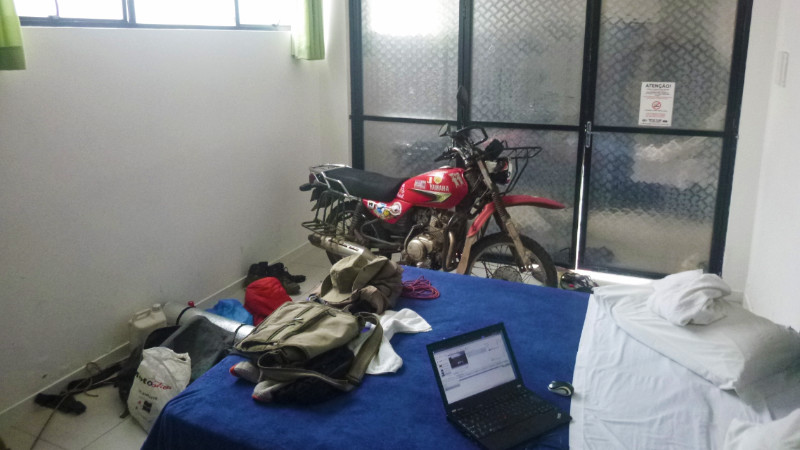 The speedo cable is the weak spot but I had already replaced that in Asuncion. Even so, I disconnected it to check to feel the inner spin at both ends and as I span the front wheel. The wheel would spin but the gear wouldn’t turn. the washer that connected the wheel to the gear had bent outward so the flat edges wouldn’t lock onto the cam. This washer was secured with a circlip which needed a circlip tool to remove.

Filipe appeared and invited me to lunch at Sesc, a cafeteria packed with locals enjoying a great value buffet. I’d just removed the wheel, so recently that I was still scrubbing the grease off my hands when Filipe was shouting Vamos through the door hurrying me up for driving around the corner to the restaurant. Over lunch, he recommended I take the wheel hub to a moto mechanic named Edson who runs the Moto shop near the traffic lights. 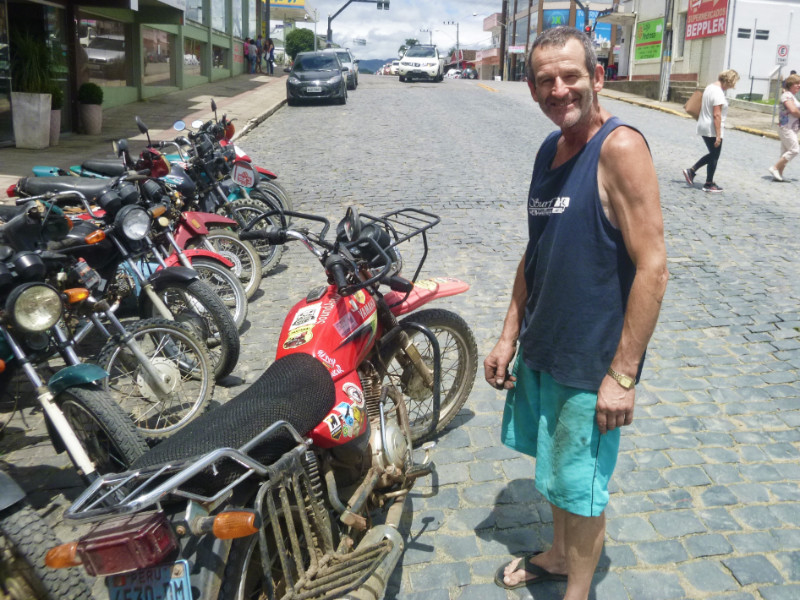 Edson could understand me far easier than most Brazilians because he was deaf and so didn’t get confused by my Portuguese pronunciation. He’d watch body language and listen to intention, taking the whole scene into account. He abandoned his work on a Honda elevated on a jack and set about dismantling the speedo gear with circlip pliers, greasing and tapping the washer back into shape. All resolved in two or three minutes. He didn’t want anything for it but I gave him 10R$ and heartfelt expressions of gratitude.

I liked MotoGaragem but it was a bit above my budget at what turned out to be 75R$ but I treated myself to three nights. 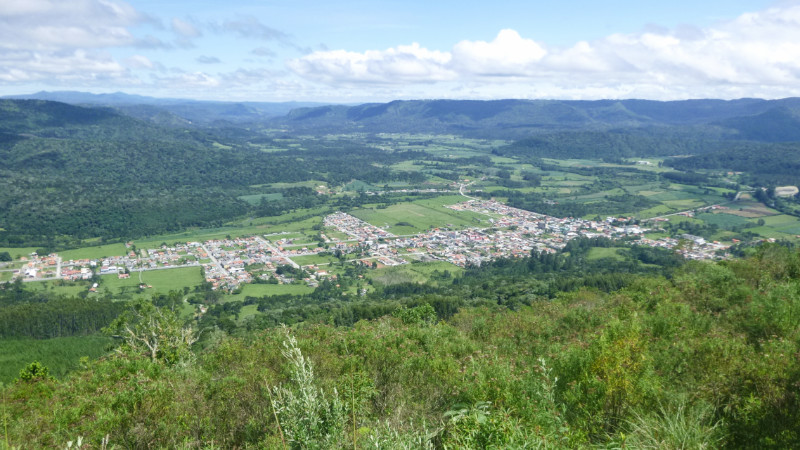 During my retreat at MotoGaragem, I took the bike up the hill that overlooks Urubici at Filipe’s suggestion. My first off-road stint since my failed search for the waterfall and at least the bike was unladen with my luggage back at the hostel. I felt a pang of pleasure seeing the speedo needle respond to motion and the odometer click up the digits as I scaled the steep track. After relaxing on the peak, admiring the spectacular view over the town, I descended for another Sesc buffet before venturing 10km west, at Rebeca’s suggestion, to Morro do Campestre. 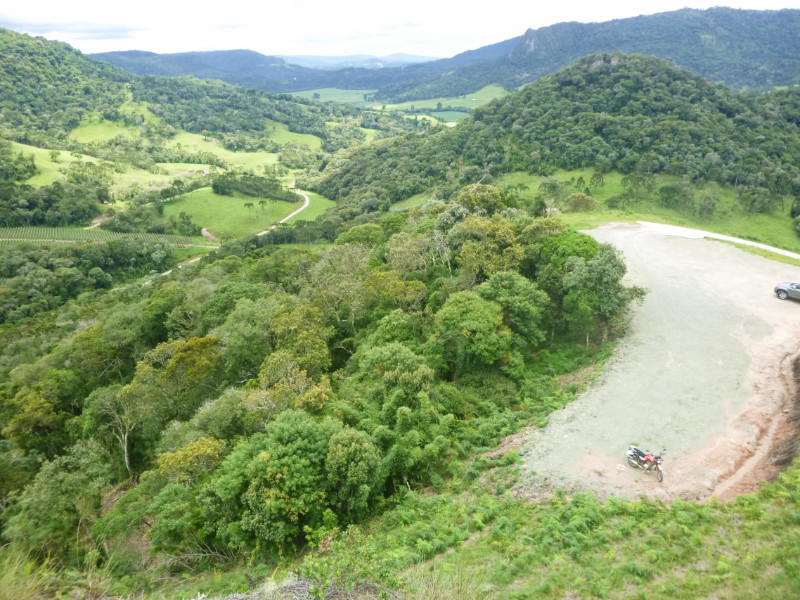 Riding around on an unloaded bike for pleasure is different from the continuous journey I find myself on. I ferry different thoughts with me and relax with no other agenda than to be “out for the day.”

The Sao Paulo dudes were drinking beer under the Gazebo when I returned. I spoke with them for a little while but retired to my room because I found the language barrier too wearing. I didn’t know Rebeca had turned up later so I’d missed her visit.

I’d settled for Social Media in place of real company before drifting to sleep to the sound of muted Portuguese conversation outside my door.