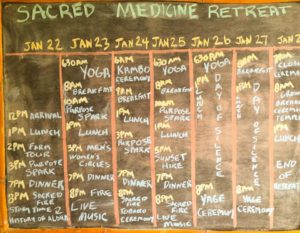 ning and there was no wifi or signal at Aloha so I fired up the bike to explore Minca, get some more offroad practice and maybe catch up on some writing. I do like multiple reasons. In a way, going downhill is harder than coming up. It’s easier to come off under braking especially locking the front wheel. Best not touch the front brake if possible.

Wherever I went in Minca, there was no WiFi. Ordering tea for the purpose of using the Wifi resulted in me drinking tea impatiently thinking of internet connection. This wasn’t working out. I gave up any online interest although the phone now had a signal for checking messages and other small-screen keyboardless stuff. Walking around Minca revealed some tucked away hostels and juice bars. More than was first apparent although it is still not a large town. What’s clear is that there is a business opportunity here due to the growing number of backpackers now that the road is paved to Minca. 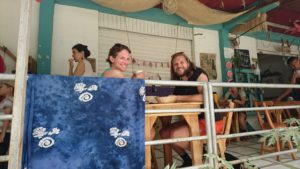 I crossed the small bamboo bridge across the river and made my way back toward where I parked the bike and heard someone call “Paul!” It was Herbert and Alle in a cafe and I went to join them for a while. They had hiked up to Pozo Azul waterfall and recommended I go since I had transport. Taking this as another omen, I took the bike up and swam in one of the upper pools where there were no people. The water was cold, straight off the mountains so I was less than a minute, enough for a wash and cool off before riding back down to Minca. the ride was better than the swim.

The softer parts of the track up to Aloha had deeper ruts than yesterday and although I was riding better, I got off at the deepest stretch and walked along the edge while keeping the bike under power to guide it through the ruts.

Sunday was a day of reading and sleeping. I was beginning to feel cold, I had caught some sort of chill which sapped my energy so retired to bed and stayed there until Monday lunchtime. I was off my food. I met Greg and Adam round the campfire that night who were fascinated by my life journey to that point, especially sailing from Turkey to Colombia and find myself here, now at this retreat. I said I was simply following the omens. Talking with Greg and Adam was an unexpected pleasure. It’s rare to speak openly with people right off the bat, at least for me it is, but this place around a campfire had something special.

I had committed to the timetable for the retreat but Tuesday morning came and I hadn’t the energy to face yoga at 6.30 so missed the first session. I needed rest and recuperation and wasn’t in the mood for socialising, Even less than usual.

Greg runs Purpose Spark and an exercise had us randomly selected our various groups of three. Mine included Keely from Gravesend and Makete, a hugely talented songwriter/musician from Montana. The various sharing exercises opened us up in preparation for the sessions to follow, including the medicine ceremonies.