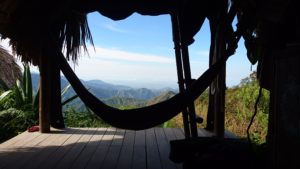 The ATK TT 180s need attention and Michael and I ride them to the dealer. I never tire of riding here. It’s exciting and takes skill to survive and thrive. The taxi drops Michael at the Old Town and continues to drop me at my bus at the Berlinave Bus Terminal so that I can continue to Santa Marta to collect the 125 and ride up to Aloha Ke Akua for the Sacred Medicine retreat.

4 hours, I understood the journey should be. 5 and a half hours later, it was dark and the driver pointed down the road toward the Marina where the motorcycle was stored. “Si, gracias!” Instead, I head for the main road for pizza and beer. I’m hungry and decided I didn’t want to ride into the jungle in the dark. I needed to find the Positano hostel I booked online while on the bus.

The hostel was 20 minutes walk from the pizzeria but easy to find via google maps. Clean and cheap, I dumped my rucksack in one of the three dorms and went to cool off in the pool before settling down in my bunk logging onto the wifi.

Breakfast was basic but filling and the Colombian coffee, divine. I normally steer clear of coffee as I believe it’s not healthy for me but how bad can something be that tastes so good?

There’s no rush to get to Aloha so I leave the hostel at the check out deadline and sweat my way across to the marina 10 minutes away.

I have trouble starting the bike until I find the choke lever on top of the carburettor. I’m up and away, across the city to highway 90 and looking for the exit to Minca. It’s not long, I veer off the highway and into the twisty tarmac scaling the foothills of the Sierra Nevada.

Some of the hairpins are sharp and I use the scooter with its pillion up ahead as my guide. If he slows sharply, there is good reason. The road is a bikers dream, smooth, undulating with sweeping curves and hairpins. It reminded me of Devon with a tropical twist. 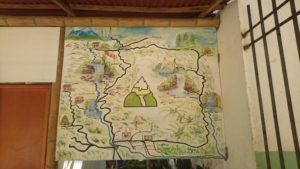 Suddenly, I’m in a village swarming with caucasian backpackers, hippies and gap year travellers. This must be Minca. I was expecting a mini Santa Marta but Minca had the air of a frontier post. A jumping off point into the wilderness for intrepid explorers. The tarmac came to an abrupt end on the bridge and my route was a T junction to the left that looked like a concrete drive to a private property. It was good that I stopped for a wander so that I got my bearings although either way would turn into dirt track soon enough.

I didn’t want to drag my rucksack around Minca with the hostel’s location not clear in my mind so I got back on the bike and headed up the track to Akua Ke Akua. The concrete didn’t last long before it turned into a single dirt track. It was pretty rough in places and I soon caught up with 4 wheel drives lumbering their way up the track like overweight hippos.

Where the track sloped down into a hollow, rain collected into muddy pools that vehicles hollowed out deep ruts. Sometimes there was an easy line for a motorcycle to skip around or over the ruts but sometimes, through the mud was the only way. Local moto taxi riders on standard road bikes with pillion and backpacks were making it look like child’s play. I found it just as difficult as my weekend at the BMW off-road school that I attended 10 years ago. I was conscious of my laptop on my back too. I didn’t want to tumble in a muddy puddle.

Like most things, the secret is to commit to a path and go for it. Hesitate in the middle of an obstacle and you’re off. If you take a few miles an hour extra then you can be through the worse with the momentum and picking up traction on the other side. I started standing on the footpegs and powering through the shallowest ruts if there were no dry path. Sometimes I slid around a little but never came off.

I stopped to check the Sat Nav which told me I was on the wrong track. I didn’t remember a junction but turned around anyway, descending the mountain for ten minutes. I asked a passing moto taxi rider who pointed the way back up the way I had come saying “Past Casa Elemento.” I had been at the sign to Casa Elemento before the Sat Nav was telling me lies. I followed the moto rider and passenger to Casa Elemento who pointed the fork to Aloha Ke Akua. It was an enjoyable ride but the bike and I were now plastered with mud.

Walking through the gate, I met a young muscly lumberjack looking man with a wild beard and announced that I was Paul, come a few days early for the retreat. It was clear this was the first he had heard of it so I gathered that this was not Ryan I had been messaging on Facebook. This was Jason, his business partner. 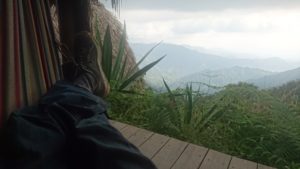 It was 5 minutes until lunch, just in time for a quick tour of the farm before settling down to eat. I was in cabana number two, a palm-thatched 4 berth dorm with a stunning view south-west over the mountains and the road to Barranquilla and Cartegena that I had become so familiar. After lunch, I settled into the hammock taking in the warm mountain air listening to the birds and grasshoppers, contemplating the series of coincidences that led me to this place: Thomas’ candid share about his ayahuasca experience; Herbert’s partner booking him into Aloha Ke Akua; the use of the bike from Santa Marta. A book lay on top of the locker: “The Celestine Prophecy” a story about coincidences not being accidental. What a coincidence. I felt I should read it and sat back in the hammock feeling I was in the right place at the right time. It was Friday afternoon and the retreat didn’t start until Monday.