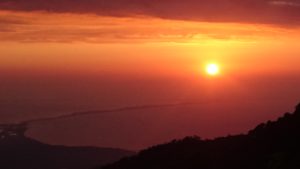 Keely and Makete were my Purpose Spark team and we had already shared a lot but sharing didn’t get any easier: exercise after exercise putting us on the spot without time to compose ‘impressive [inauthentic]’ stories, relying solely on truth and vulnerability. “Vulnerability is a muscle.” Greg, the facilitator told us. It was a powerful muscle too, I could see its power to inspire in listening to other people’s heartfelt stories. Vulnerability is a muscle worth exercising.

Pen and paper crystalised all that bubbled up within; dormant baggage from the past buried under the blanket of suppressed emotions that I never knew remained hidden deep down in my bilges. 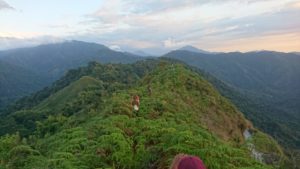 Shortly after five, we headed down the mountain ridge for the sunset hike. It wasn’t far to a small plateau on the peak at the end of the ridge below Aloha and we watched the sun descend over Cartegena and beyond.

People started to return to the farm when the sun started dragging the twilight away with it and eventually I am left sitting on the ridge with Ryan, Makete, Jason and Bryan. All have had Ayahuasca before and I learn about the revelations that each have had from their ceremonies. I’ve never done an ayahuasca ceremony before so I was fascinated by what I might be in for tomorrow night.

I was feeling the evening chill but did not want to miss this conversation. The moon although far from full gave us all a silver sheen and we sat like ghosts on the mountain. 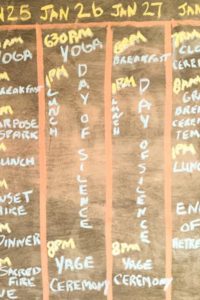 Friday morning, I was beginning to feel flashes of doubt. It could be apprehension or fear of the unknown, but both are a disease of thinking and I let those thoughts go. I felt fulfilled and at peace with all the processes that led up to today and I felt I didn’t really need the ayahuasca but Miguel and Luis had reassured me that it is good for opening us up to the spirit world, where consciousness lives… and for me, where consciousness lives is worth exploring.

It was a day of silence today and I grew tired that afternoon so went to my bunk for a couple of hours sleep. The ceremony wouldn’t start until at least 8pm. It was dark when I awoke and everybody had already got their bedding out on the grass. We were all to spend the night around the bonfire. All the best spots closest to the fire were already taken and I settled into a place further away next to Edward and Keely.

The fire was soothing in its warm orange glow and sparks floated up to meet the stars in the cloudless sky. The ceremony began with ritual chanting and dancing around the medicine before it was dispensed which, even though I didn’t understand the words, stimulated my own appreciation and respect for the ceremony before I drank the ayahuasca and followed with water. I went to sit down and wrapped the blanket around me.

I had heard that the medicine tasted really bad. It was distinctive and strong flavoured but not bad. 10 minutes later I began to feel nauseated and disorientated but didn’t want to be the first to move, and started to wonder if there was some sort of protocol to follow. Others had drunk before me and they weren’t moving. Edward moved to the ridge and I followed a moment after finding my own space. The grass was turning fluorescent violet and turquoise and appeared as a geometric web. Reality as I knew it was falling away along with my ability to move. 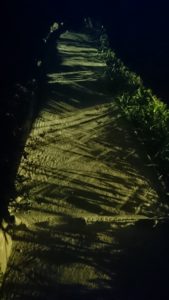 I already knew that the secret to the medicine was to surrender to it but I had a dilemma: I was stranded in the grass at the edge of the ridge. I couldn’t  surrender yet, I was too far from my bed and I needed to go to the toilet to purge these laxative sensations. With both locations slowly receding further into the distance, pretty soon, it was going to be a long journey to either. I rested on my hands and knees heaving saliva into the violet grass webbing and praying to the purple mountain in the indigo sky in front of me. Even though I wasn’t wearing my glasses, everything appeared vivid and pin-sharp with the colour and contrast turned to 100%. Imagine your drunkest night after a party but sandwiched by full awareness underneath it all and a layer of dreamworld on top: a lucid dream on a roller coaster… 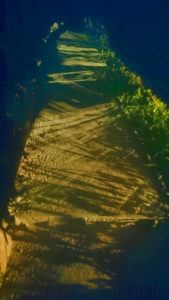 I wanted to purge but I felt empty and moved slowly toward Miguel and Luis for some water. Copious amounts of water stimulates the purge.  Standing up on shaking legs, I downed a glass of water. I didn’t want another… “Never again,” I thought as I staggered back to the ridge and laid in the grass.

I was conscious and had all my senses within these new scenes and feelings. If I was to make it to the toilet, it had to be now while I could still move. I put my hand up and Miguel came to help me. Bryan walked me to the block. My legs were weak and I needed support. I passed Tim who was bent over purging the weeds next to the path to the toilet block,  which inspired my own next to him. I felt a bit better as I made it to the toilet. The shadows across the path from the bathroom lights gave the path geometric pattern that was rich in colour. It was hard to walk upon and work out where the steps were. 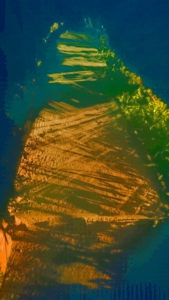 The room was intense orange and green with shadows taking on geometric patterns. It was blissful sitting there letting everything go both in body and mind but I was aware that others would need it too so didn’t stay too long. The benefit of the trip to the toilet was that I was led back to my bed. I’m thankful for the help I received and remembered the message from the Kambo: “Allow others to help you…” Thank you, Miguel and Bryan.

I wrapped up in both blankets and faced the fire. I felt safe now and laid down. Laying down made me feel sick again and I crawled out to the edge of the grass. I purged a bit more but not much. I think I was done and settled down under the blanket again. 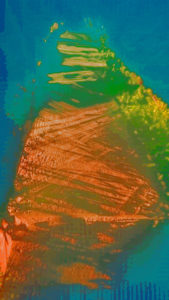 ame to me, his silhouette vivid out of the night sky and asked: “How you doing, Okay?” I said I thought I was resisting. He replied “Good, keep going.” laughed and disappeared. I smiled and relaxed into the experience

Everything looked vivid and alive,  and I thought grateful thoughts of how my mum had brought me up almost single-handed and empathy for my father’s dementia and wishes for him to stay strong for whatever he was going through. I felt no profound messages coming through from or for myself. Instead, my awareness was going out to the stars as though I was an astronaut in orbit but still feeling the Earth on my back. The world became silent apart from my breath. The sky came over the mountain in front of me Cassiopeia was above and Orion was following the moon to the western skyline. 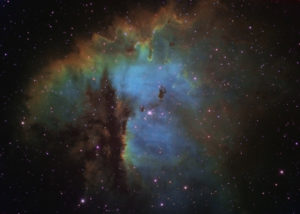 My feet were cold but I could feel they were under the blanket. The tree to my right was violet and turquoise and stood out against the sky. I wished I could photograph it all, it was so beautiful.

I didn’t need anything and knew I could surrender completely but there seemed to be nowhere else for me to go. I just breathed into the night sky appreciating my existence in this moment.

Couldn’t I have just one secret message? A clue to my ideal role in life perhaps? No, nothing, just a feeling gratitude and being alive. That was good enough. Words came and went that I had not heard before. Words with no meaning but felt good speaking into the stars.

People started coming to the fire and singing with the guitars and although I was perfectly aware of all that, I was still down the rabbit hole and a second cup was offered to those that felt the urge to go deeper. Should I? I didn’t know and, anyway, I couldn’t move which I took as a sign to stay put.

Six hours after taking the medicine, I was coming down to Earth, I felt such peace and descended into a warm and tranquil sleep. When I woke it was dawn. The blankets and pillow were moist with cool dew, but I was warm and comfortable. I thought about what revelations I had this night and couldn’t really define any as the sun slowly rose above the mountain so I took up my bedding and headed to my dorm with a feeling of peace, gratitude and fulfilment, which was probably the revelation I was really looking for…