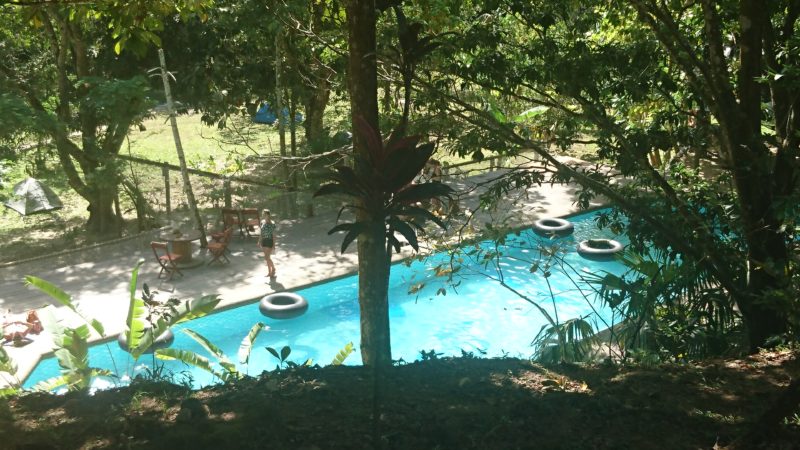 I awoke before lunch, hungry but with a feeling of profound contentedness. That ‘never again’ feeling was now a distant memory and I was looking forward to tonight’s second ceremony. It was to be lighter, focussed on celebration with a later start.

Naturally, a good part of the day was spent sharing experiences. It turned out that last night had been one of the most intense yage ceremonies ever experienced by both Aloha and the facilitators. Being my first time, I thought that this had been ‘normal,’ if there is such a thing.

The previous day after the herbal bath Tim had told Miguel and Luis he had had a vision of the indigenous ancestors and consequently the dose was scaled back to half.

Miguel confessed that I had slightly more as the medicine put more of itself into my cup, which cleared up the mystery of how everybody else seemed to be able to walk unassisted. It was a perfect introduction for me and the learnings came for many days after this night.

We spent a good deal of time sitting around the fire with the guitars playing and whoever wanted to sing along. Makete is a world-class musician and songwriter and played a fabulous set in front of the fire. He stopped and asked, “Are we drinking medicine tonight?” It was probably midnight by the time the ceremony was underway.

I drank my second ever cup and this time, with logistics in my mind, topped up my water bottle and went to the toilet straight away while I was still able, and then got comfortable in my spot.

This time the taste of the medicine had an association with vomiting and I could see how it would become harder to keep down if I thought about it too much. the dose was lighter and the effect was slower to arrive. There were no psychedelic colours, everything looked normal and I could walk OK. I felt light headed and made my way to the ridge to walk around ready for the purge. It was a while coming and I helped it along deliberately in order to feel better and go and sit back down.

I laid down in contemplation. Nothing profound appeared to be happening and I was fine with that. Instead, I was reflecting on last night and thanking the stars and mountains. I felt almost as if I was drunk but with sharpened awareness instead of the dullness that alcohol brings.

I was recovering by the time the next cup was being offered and I stepped up to the altar. It was harder to keep down because of the flavour. I purged fairly soon after and walked around for a while, visiting both the main fire and the quieter fire in the purpose build circle below, warmed my bones and contemplated whatever came to my mind then returned to my spot to sleep. 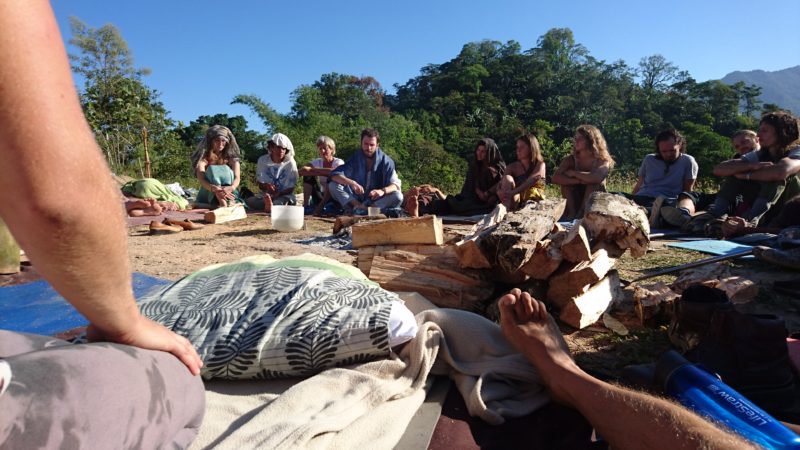 In the morning, I awoke just before dawn and people gathered around the greying embers of the fire to close the retreat and share experiences one by one. I didn’t know what to say but the right words seemed to come out on their own without thinking about them. A deep feeling of gratitude, not just for the Ayahuasca but all the processes leading up to it and beyond. Every part of the retreat was like a jigsaw piece that interlocked with the next to build a larger picture of part of the universe and my part in it.

This week had bonded our whole community. Deeper than I have ever experienced before. The retreat was closed and people began to drift away, and as people left, the energy of the site began to wain. Aloha still had its own feeling but the energy that we all brought to the retreat had been palpable.

Tim left straight away and I promised to meet him at Rio Elemento hostel in Minca the next day. Rosalie left too but most of us stayed at Aloha for one more night.

Monday, I got ready to leave after just one more cup of tea. The tea would be ready in 10 minutes but still wasn’t apparent an hour later. I might as well stay for lunch, so I waited. Another hour later, I felt I had already overstayed and I prepared to leave. Lunch was about to be served but I had made up my mind and took my helmet and bag and retrieved the bike. 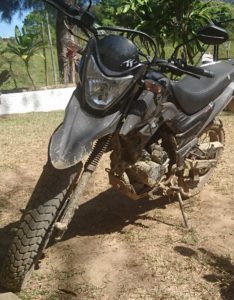 I rode the opposite direction to the way I came and followed the loop around via Los Pinos and Pozo Azul. It was an easier route with far more paving and probably took the same amount of time even though the distance was further. I spotted Sam in a juice bar and went to offer her the cup of tea that I’d promised the day before. Herbert and Alle were there too so the offer was quickly forgotten as greetings were exchanged. The juices were nectar to my taste buds. Greg, Adam, Sheryl and Jason joined us and so we had a mini-reunion tagged straight onto the Aloha departure.

As we disbanded I made my way to Rio Elemento. They were fully booked but there was a hammock I could rent. Perfect, I took it and Jay, the owner, proceeded to give me a tour of the place. There is plenty of space here and a good sized pool and walking around the pool toward the river, the familiar blue eyes of Rosalie pierced my awareness. I didn’t expect to see her here – it was an unexpected pleasure.

Greg, Jason and Sheryl joined us as I returned to the terrace above the pool… I wanted to catch up on my blog but it wasn’t going to happen here right now. I went to dinner on the terrace and Gerhard joined me at my table. Gerhard was 57 and saw me as a fellow older traveller. I keep forgetting I’m old. Most of my peers are half my age. Greg and Jason joined us and Gerhard shared so much wisdom from the lessons from his recent divorce, we were all inspired. He admitted that he didn’t love himself until after his divorce. A tough lesson that I recognised through my own history. 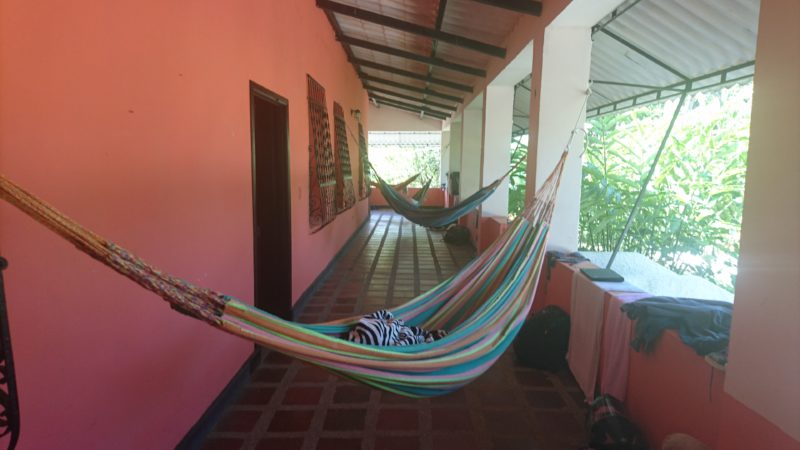 There were four hammocks in the corridor and it looked as if I was last to turn in. I kicked off my flip-flops and settled down wearing my shorts and t-shirt with a blanket over me and drifted off to a fitful sleep. I woke at dawn slightly chilled. It was a cold night and I got up for an early breakfast. Greg, Rosalie and I went down to the river for a swim. Bracing mountain water got the blood flowing.

There was no check out time as such so I retired to the hammock to update my blog until the middle of the afternoon. I had promised to meet Helmut, Jason and Sheryl at Helmut’s hotel and restaurant in Santa Marta. It felt time to revisit ‘civilisation’ so I eased the bike through the mountain passes toward the city…