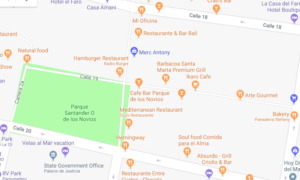 Santa Marta is a grid system of streets: Calle x by Carrera y so it’s easy to guess a route to roughly where you want to go. Ikaro is in a pedestrian precinct near Parque de Los Novios on Calle 19. I leave the bike at the side of Calle 18 and walk around to Ikaro and up to the counter. I spot Helmut and Inka out the back of the kitchen and stroll around and treated to a nice cup of Mate Green Tea. No sign of Jason. I book into the hotel across the road and flick on the air conditioning and spend a cool couple of hours online. 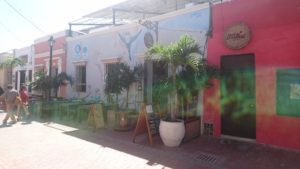 When night descends I emerge into the street to buzzing activity, music and crowds. This place is busy. I fetch the bike off the street and push it along the precinct and park it in the well lit Plaza next to a cleaner looking bike and go for dinner at Ikaro. It was good catching up with Inka and Helmut. They had been upstairs in the double suite above my dorm at Aloha but our paths never really crossed. 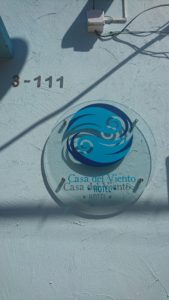 I awoke early and continued updating the blog to the point of arriving in Colombia about 2 weeks back. I was living my life faster than I could write about it. I went for breakfast at Ikaro before the 10.30 cut off and checked out of the hotel before the noon deadline then hit the road to Cartegena. Carrera 4 led me south straight onto highway 90 along the isthmus that had been visible from Aloha. The Cienaga outskirts are depressingly run down and polluted. A contrast to the beautiful sunsets seen from way up in the mountains.

The air was hot, even along the shoreline. And the bike was humming along at 100kmh keeping the air flowing around me to cool me as much as possible. Without riding with a group, I could find my own pace and not push it too much with the traffic. Overtaking was easy on the long 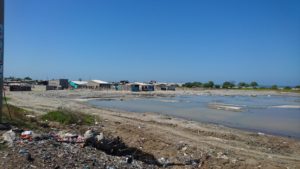 straights and sometimes along the generous hard-shoulders when the oncoming traffic was busy.

It’s about 200km from Santa Marta to Cartegena with Barranquilla in the way. I found the Barranquilla ring road for the easier route away from the congestion.

There’s a volcano near Cartegena. I passed a sign: Volcano 18km. It was the only one I saw and I soon found myself at the Cartegena City limits just as rush hour was starting. I wasn’t going back now. I got my bearings and used the sun as my beacon for finding Club Nautico in Manga. 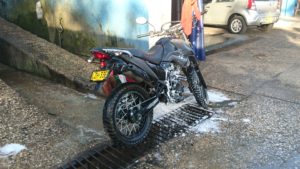 The Cartegena rush hour is frantic, tight and noisy, elbow to elbow with motorcycles, taxis and buses. The licencing laws ignore motorcycles under a certain size which results in swarms of 180cc and below bikes. As soon as the dock cranes become visible, I know I’m home. I see Mike and Toni on the way to the bike wash so they get to see Minca mud rather than a pristine bike.

I have dinner and a few beers at Toni’s boat and eventually follow Michael to Pantelisa squeeze between the baggage in my old cabin on for the night. Compared to Minca, Cartegena is hot and sweaty and I go up to the cockpit at 3.30am to sleep in the slight hint of an intermittent breeze.