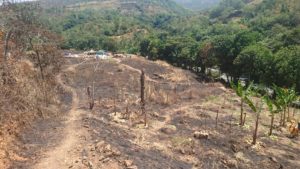 Day of rest. In the morning, we could see isolated plumes of smoke rising out of the treeline above us. Small fires that looked like evidence of campfires rather than a broad forest fire. We took shovels and water up the track to the ridgeline and made our way into the forest. The brush beneath the trees was black and charred along fifty percent of the forest floor with pine trunks charred up to two metres high but the trees had resisted catching fire. 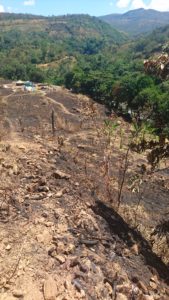 My foot slipped and my left flip flop broke. I was bare-foot with pickaxe and water container. The charred floor was cool underfoot except where the sun penetrated the canopy. My built-in sensors for detecting underground fire. We spotted a few small plumes on top of the ridge and doused them with water. As small as they were, the heat was intense and the charred roots and branches hissed and steamed a long time during their dousing taking surprising amounts of water. The bigger plumes were down the steep sides of the mountain. Peter had already set off down the side to find the source of the biggest plume and various people went to help.

I continued to where the black ground seemed to end abruptly on the ridge and go no further. I’d doused the few smouldering spots I could see and made my way back along the ridge. Luis was now at the top with a dustbin of water. It must have taken some effort to drag that up there. I joined the chain of five men down toward the source where Peter was and passed buckets of water down the line from the bin. Over the next couple of hours, we put out all the fires that we could find and returned back down to the camp.

The view down the valley was apocalyptic and the mood was muted but I was optimistic. The fire had not damaged any of the tents or living area and cleared swathes of land that we were cutting back with strimmers. On top of the soil was a healthy black layer of charcoal. What wasn’t certain was the fate of the trees as the fire spread through the forest floor. To me, it looked like a miraculous event: a purification, a reflection of my internal purification of yesterday’s Temazcal. A clearing for new growth. A fresh start. A rebirth 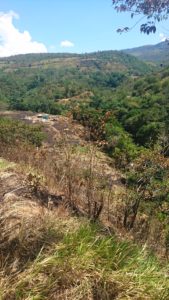 Peter had turned the original charcoal pit into a pond by putting a spring water hose into it and we gathered some of the smouldering logs around the orchard and dumped them hissing into the pool.

The rest of the day we watched the hillsides for signs of fire and Joni, an energetic young Colombian, raced up the ridge with water and machete to deal with any we discovered.

We had done as much as we could do. The day was hot and dry and we were lucky that the wind was light enough not to breathe life into any embers that might still be smouldering up the hillside.

Luis left to go on holiday to Ecuador and it was left to those of us that remained to pray for rain. I took my scepticism to bed to listen to the guitars drum and singing which lulled me to sleep. I don’t know what time the rain woke me but through the snare-rattle of the rain on the yurt roof, I could hear cheering and singing as those that were still up were celebrating the steam rising out of the woods as the rain was quenching the remaining embers of the fire.

Coincidence? There were too many happening since my odyssey from Turkey to Colombia and the spiritual path I was now exploring. And does it really matter what you call them? Since the retreat at Aloha Ke Akua, I was being constantly exposed to miracles in life that I previously had closed eyes to. Shown how ungrateful I had been in the past and how I’d taken for granted all that I gained and lost throughout my life. Clung on, far too long, to assumptions and judgements that no longer served me. Now I was happier observing and witnessing what was happening in the moment. There was far more value for me, now, in observation and acceptance than assumption and judgement. 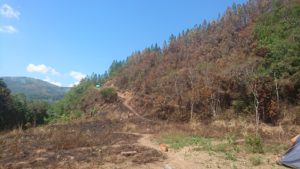 Feb 12th Mon At breakfast, there was no more evidence of smoke or fire but half the hillside looked like it was now entering Autumn with the leaves turning brown. It looked as if some of the trees were not going to survive the blaze. I didn’t really know if they would or not.

Miguel arrived and didn’t speak much about the fire. What could we do about it anyway? We had practical issues to attend to like moving 200 bamboo poles down the slope from the top of the ridge to the new Maloka that was being built next to the kitchen.

Connie is a slight woman of 59 who went about it with gusto. She was here for the Kambo for treating a serious health issue. She was already off her medication and a good way through several Kambo ceremonies and up and down the hill hauling 5 metre, 15cm diameter poles on her shoulder. She and Graciela who were pulling poles out of the hut and dragging them to the steepest part of the track like a freight train were showing us up. I made a bridle for tying two poles to drag down the hill after bruising my sides by wedging the poles under my arms the first dozen trips. The bridle worked well and it was easy to transport two at a time without damage to me or the poles.

The shale and gravel were sharp under my bare feet and as the sun rose high in the sky, the blackened earth began to burn my soles and I surrendered to the kitchen and the river with the thought of finishing off tomorrow as we had already brought down at least half of them.

After lunch, the clouds sheltered us from the sun and the ground cooled down. Connie was back up the mountain track again, bringing poles down making us look bad so I padded my sore feet up the gravel track to help finish off the job with the help and inspiration of Steve, a young fitness fanatic. I was out of my league, fitness wise, but I discovered a secret weapon from the family here: Mambe and Coca leaves. That gave me a turbo boost and the initial fatigue I had felt in the morning had disappeared by the afternoon. It didn’t do much for my bruised sides and sore feet but the job was now done. This freed up tomorrow for whatever else.