The Road to Cusco: Ipiales

2pm. We pulled into a services for buses. Pulling out my phone and looking at the maps app, we had only covered a small portion of the distance in this 6 hour leg. My info had the journey as 10 hours total.

“Manana Manana,” The driver replied when I asked him when we would arrive. I spotted a couple that I had noticed before at the Bogota station boarding the bus in front of mine. That bus was going directly to Lima. I could have got that one if it had appeared on the options I found on the internet.

Meanwhile, I checked my wallet, I only had about $12000 cash which is about £4. If I were an extra day on the bus then I would have to make that last. I blew $3000 on an empanada and a coke. The internet access had been dire all the way from Bogota, although there must have been sporadic connection since messages would sneak through while I wasn’t paying attention. I’d booked the hostel in Ipiales on false travel information and I was kicking over the volcanic stones in the car park thinking how to alert them of my twelve hour delay when the driver returned to allow us to reboard.

At 8pm, the cabin lights flickered on as we pulled into another services. I had no plans for feasting on the high fat carnivorous menu with my remianing $9000 but I was glad of the stop as I didn’t want to go into the toilet on the bus. Despite the low temperature, the smell of overflowing urine began to pollute our breathable atmosphere.

Daybreak revealed a beautiful sunlit landscape as the road followed the gorge towards Ipiales. Reading lonely Planet about Ipiales told me that it was an uninspiring commercial town and Pasto was much better. We had already passed Pasto in the dark just before dawn.

Arriving in Ipiales wasn’t much to write about apart from being a relief to end the 23 hour bus journey. Small and dirty was my first impression, which I revised a little later. The town was bigger than I thought.

After collecting my bag and blowing another $3000 on breakfast at the bus station I marched up the hill toward the hostel. The air was pretty thin as I was at over 9000ft altitude. my lungs were clutching at the petrol fumes and scraping as much oxygen out of them as possible but not fast enough to prevent me having to stop to catch my breath. 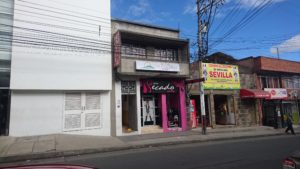 Walking along Calle 13, I stopped at the marker that indicated the hostel on the satnav. Nothing. Checking the email for the address, the numbers suggested it was further down the street – yes, there it was, a narrow doorway like an unread and forgotten book on a bookshelf squeezed between a closed down cafe and a sex shop.

Jose answered the door and welcomed me into reception. Jose spoke no English but I hammered away at my best Espanol and secured a room for four nights totalling £18. The room had no window but the door opened onto a balcony over a covered courtyard. It was perfect.

This week was Semana Santa hence the stopover for four days. For Colombia, a country with a Catholic population of 90%, this week-long Easter celebration is the most important religious festival of the year. The whole country mobilises for a national holiday. Shops closed, Churches opened and regular services thrown into uncertainty. Which was why I was here in Ipiales: to sit it out. Today was Wednesday. Thursday and Friday were the big days.

One of the other guests told me about Santuario de Las Lajas, about the only thing worth seeing in the area. It was getting late so I noted it for tomorrow, Thursday.

The mornings at this altitude are cool, like bright April mornings back in England. Full jacket and jeans was the dress for the day. Walking down Carrera 6, I dipped into an unusually large supermarket to stock up on peanuts, my emergency energy supply. The cashier said something and held out her hand, I gave her some money. “No, documento.” She wanted ID… for peanuts… so I fished out my passport and watch her type some details into her register. It may have been a membership deal but I didn’t know and wasn’t really interested. It was amusing and I complied only to get my nuts. 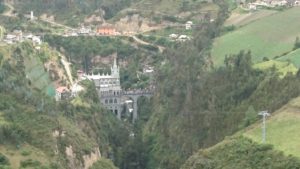 Not far down the road, I hopped on a passing collectivo. A collectivo is like a taxi that waits for a full load before moving off only this was a bus with the word ‘Collectivo’ written down the side.  It stopped about a mile and a half short of Las Lajas but I could see the sanctuary almost straight away from the road, way down below me in the gorge. The road gently descended the mountainside sweeping around the contours which made for an easy walk. A block paved path eventually forked away from the road and quickly got steeper, scaling down the side of the gorge.  I’d lost sight of the sanctuary but the increasing presence of more and more vendors selling nik naks from selfy sticks to plastic virgin marys and religious candles confirmed the route.

Local intel told me there is usually no-one here on a weekday but this was no ordinary week; this was a holiday, a religious one at that. Families milled and sauntered between vendors making progress difficult. They have a knack of walking both slowly and into you at the same time. 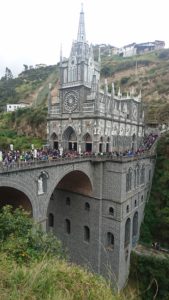 I had the usual meander around the attraction, buying nothing but an ice cream and climbed off the path to record a quick Youtube video before making my way to the cable car station I’d happily noticed on my arrival. Teleferico, they call it here. I was hauled high over the deep gorge up the mountain and returned to near where the bus drop-off was, relieving me of the thought of that long high altitude oxygen depleted climb back up the mountain nursed in the back of my mind all the way down.

Flagging down a collectivo outside the teleferico station, I asked for Charco, and with a nod from the driver, sat down and watched the scenery pass by out of the window. 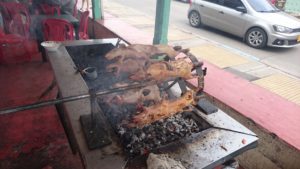 Charco is on the outskirts of Ipiales. It had a mention in Lonely Planet and looked pretty and colourful from a distance with the multicoloured houses stretching up the hillside. But the centre was nothing special apart from restaurants having some kind of rat on a spit over charcoal. It was cuy, later revealed as guinea pig. There wasn’t much else available for lunch here apart for a chicken place around the corner. 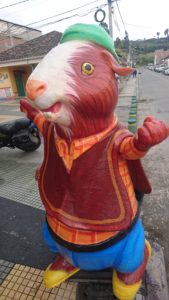 Between leaving the spit and arriving at my table, The cuy appeared to have been opened up and hammered flat. Flipping it over revealed kidneys in tact below a rack of ribs and either side of a thin spine. The skin was tough with the texture of leather but the flavour of pork rind. I threw that to a dog and watched it struggle to chew it into small enough pieces to swallow.

Back in Ipiales, restaurants were uninspiring enough to avoid going out, battling with the holiday crowd and I stayed holed up in the hotel for the rest of the day, snacking on peanuts.

Friday was a disappointment as I ventured out. Almost everywhere was closed. reminiscent of how Sunday’s used to be in Britain in the days before commerce steamrollered the laws protecting the Sabbath.  I retreated to the WiFi at the hotel.

Night time was disturbed by lots of drumming and marching in the street and later, boisterous guests disturbed my sleep lumbering along the wooden balcony and unmoderated chatter and laughter.

Saturday, all the shops were open again and, after breakfast, I spent the day writing. Overdoing it to the point of feeling tired and fed up before turning in early. 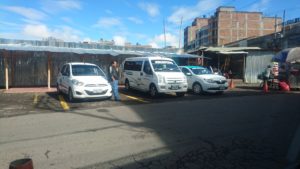 Sunday, I awoke early due to the noise of early rising guests through paper thin walls and lay in until 7.30. The internet wasn’t working which prompted me up for an early shower and to pack for Quito and beyond. I packed and left the Hotel and headed for the frontier taxis via La Taverna for breakfast but, even though the door was ajar and there was activity in the kitchen, it was not yet open. Too impatient to wait, I decided to postpone breakfast until the bus station at Tulcan, just over the border in Ecuador and strode around the corner toward the frontier taxis.