Sacred Valley of the Incas: Ollantaytambo 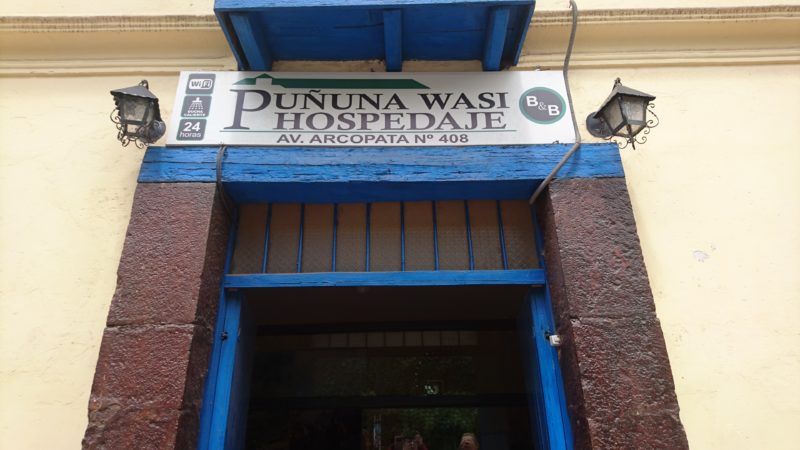 I’d been at the hostel so long that I felt at home and not that motivated to get moving. I’d been trying to mentally figure out optimal packing of the bike with my gear and the new stuff that came with the bike. I couldn’t do it without physically giving it a go and getting it wrong so that was the plan: experience was my best teacher. I packed the bags and pushed the bike out onto the street to start loading. The 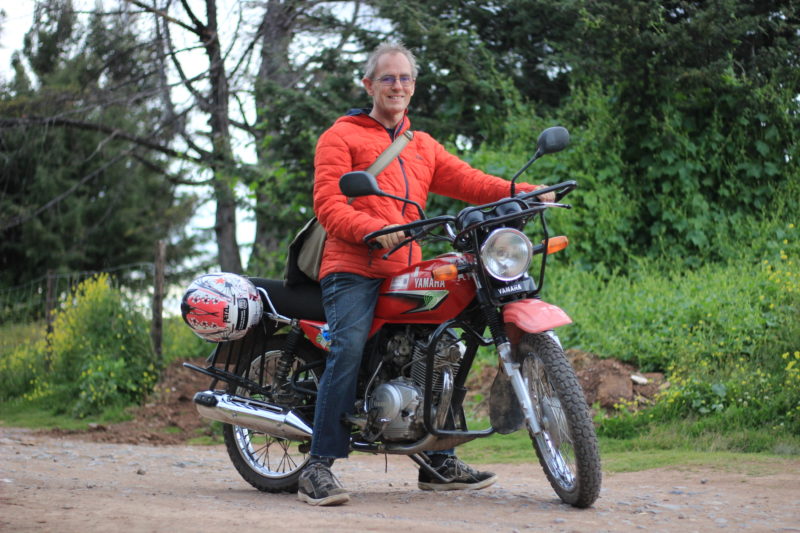 sun was already high and hot and the effort of lugging and repacking the bike in the hot thin atmosphere was parching my throat. I had already packed away the water, mental note for next time. First stop? The store a hundred metres up the road to quench it my thirst.

Maps.me isn’t the best navigator out there but its better than nothing and works offline. I figured, once I’m on the road east out of the city then I’m set on my way. I push the starter button and the motor rumbles into life.

The road is smooth and fast and pretty soon I’m through Anta. The valley is wide and doesn’t give me the impression of the sacred valley. Pulling over, I discover that it’s not. 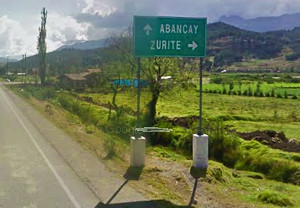 Up ahead is a right turn to Zurite, a track cuts across through Zurite to the road to Ollantaytambo. Packing my phone away and donning my gloves I turn along a shale track. Zurite isn’t too far off the main road but looks like a village from the third world. Laid out in a grid, the village is laced together with mud tracks and a suggestion of a central square.

The Yamaha bounces along the dirt track out of the top of Zurite and around the foot of the hills to the northeast.

Huarocondo is half a dozen kilometres up ahead and I can join route cu-110 to Ollantaytambo. Over the cobbles of Huarocondo and through the narrow streets brings me to an asphalt T junction and I confidently turn left and sweep down the hill. I use traffic a sign I am on the right route. There was none here, which subconsciously raises a doubt on whether I’m on the right track.

Three minutes later, it begins to rain, something I had been betting against since pulling on my jeans and jacket. I didn’t bother with the knee and elbow pads as I was keen to just get packed and going. The rain began to team down and I began to feel it penetrating my jacket. The terrain was rocky and mountainous. I was praying for some trees and I settled for some spindly specimens next to the river. Hurrying its way over the rocks down the valley.

The trees succeeded only into marshalling the raindrops into rivulets and poured them over me and the bike. Looking up and down the road, I decided I could get no wetter and head off onto the shiny black road surface peppered with rocks, fallen from the bordering cliff side.

Up ahead, the road turned grey which I took to be more shale. No this was bone dry asphalt with the edge of the shower painted as a sharp line across it. I was into dry, warm sun on a dry, smooth road.

A mile winding around the valley and I arrive at what looks like a construction site entrance. “Pare” means stop. The other signs I didn’t understand apart from closed but it had a list of times posted too. A car came past into the dusty entrance, disappearing around the corner.

It was early afternoon and it was sunny. I guessed this route was only closed at night and I slowly edged along the dirt track where the road used to be. This must have been a huge landslide as there was nothing but dirt and rock, harbouring the odd construction vehicle and shack for about a mile.

I follow an un-named river, that doesn’t even appear on Google Maps, crossing the railway between Cusco and Machu Picchu a couple of times and didn’t see any more asphalt until I arrived at the Urubamba river. 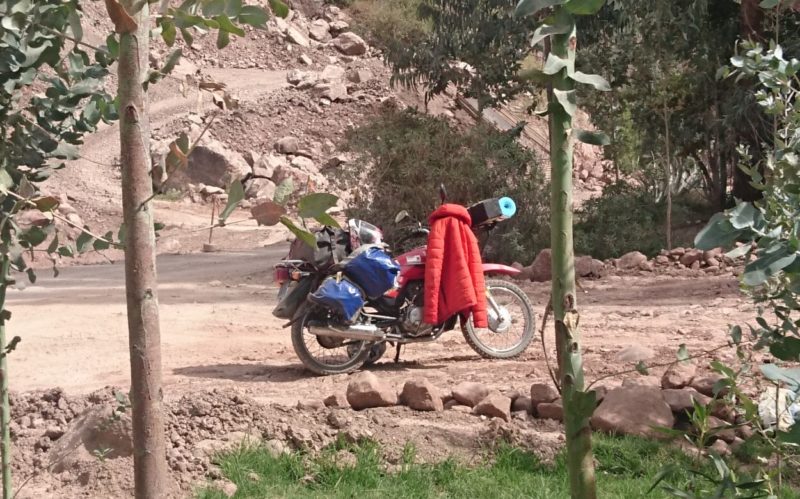 Cu-110 had degraded into a gravel track and I stop and remove my jacket to dry my jacket and me in my Tshirt, off in the sun. The satnav app tells me to turn right, parallel to the Urubamba river, the opposite direction from Ollantaytambo. The track takes me a quarter of a mile to a steel bridge and a T junction that was buzzing with tour buses and taxis: the main road between Cusco and Ollantaytambo and Machu Picchu beyond. Turning left, I joined the flow and tried to keep up, watching the more aggressive vehicles gain in my mirrors so I could wave them pass without a battle. 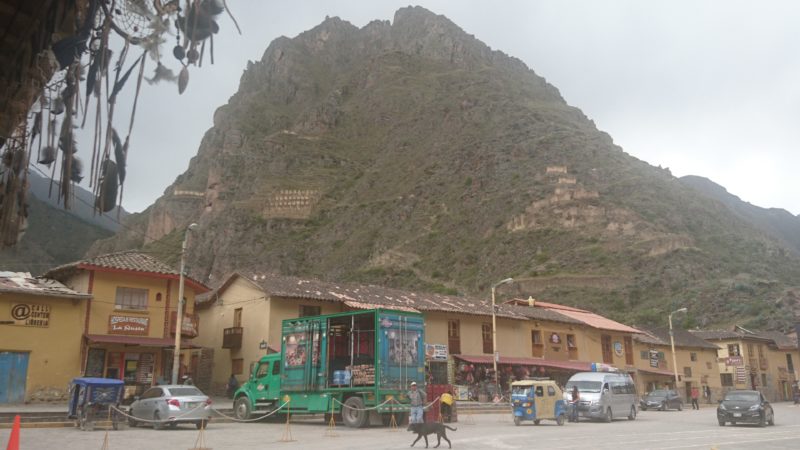 About 10 minutes later I was bucking over Incan cobbles behind a Coach rumbling into Ollantaytambo. I coast through a quaint square bristling with souvenir shops, cafes and tourists. Just past the square I turn left into Estudiante and judder along the coarse cobbles to the Casa Quechua campsite. My moto and I are welcomed through the back gate into the garden and I set about unpacking the bike for the first time. I’ll need to do better since the whole load had shifted forward but not far enough to foul the moving parts of the bike or me. 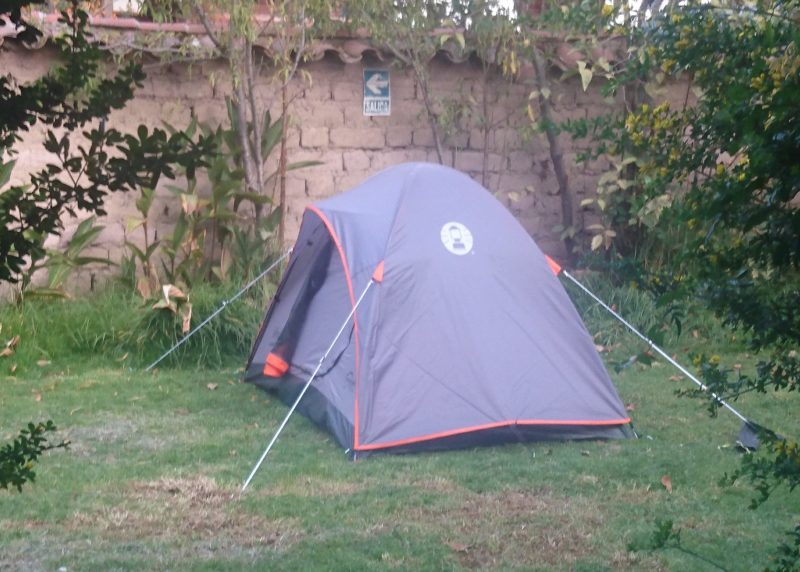 The tent was still in its original packaging, mainly a cardboard box, wet where the rain had penetrated the stitching of its outer bag. It’s a Coleman Rainforest 2, and comes with instructions in English, although the diagrams are self-explanatory. The tent was up in ten minutes, a record that should now easily be broken. 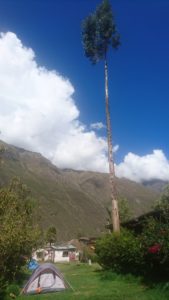 When I bought the tent, I was disappointed I couldn’t find a 2 man but now I was thankful as the luggage now took up quite a bit of room. I had the appetite of a Paris – Dakar competitor. I had skipped breakfast and lunch due to the packing earlier and was keen to shovel some food past my cracked lips and dry throat. Riding at altitude appears to be more dehydrating than normal, as well as exhausting.

Entering the square after tidying my bags away, you might call throwing them in the tent, I was ushered into a cosy looking Pizzeria with welcoming smiles of the family members but no customers. Once in, it’s hard for me to make excuses and leave. I was the only customer and had the feeling I was about to be fleeced and wanted the reassurance of the herd, other diners to validate the value.

I settled into my new sleeping bag and tent around 9pm.

I awoke to voices. They weren’t there when I went to sleep. The camping community, as few as they were socialising in the communal area about ten feet from my tent. It’s nice to here young people fully expressed and uninhibited, as long as it’s not too close to me. Another ninety feet might have done the trick.

Sleep is punctuated by bouts of waking up gasping for air. An internet search reveals that I’m not dying, not yet anyway. Carbon Dioxide in the blood controls breathing. At high altitude, the body senses both low oxygen levels and high carbon dioxide to stimulate breathing. The breathing reduces the Carbon dioxide in the blood low enough to switch off the drive to breathe. When the Carbon dioxide rises again it switches the drive to breathe back on again, often with a gasp… and the cycle continues. 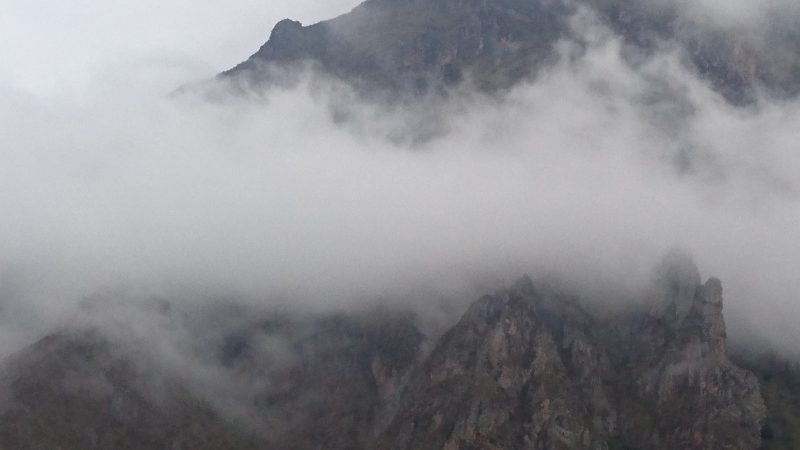 I emerge not long after dawn, grey formless clouds drape the Andean peaks. The morning air has a Celtic chill. No-one else stirs, all is quiet and there appears to be nothing to do, I retreat to the tent and scan for the absent WiFi signal while trying to keep warm.

Next post: The Long Way Round to Machu Picchu: Santa Teresa