Sacred Valley of the Incas: Pisac 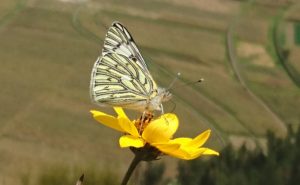 Sun 15th April, 6 days after buying the Motorbike. It’s difficult to gain access to the passageway and wheeling the bike over a plank down the steps, so I’ve been reluctant to move it again until its time to leave. Cusco is a charming city and I have no time pressures so hanging around here is not a bad option. As I get to know my way around, it starts to feel like home.

Rosalie will arrive tomorrow and I’m just kicking back in the hostel dorm. I seek some solitude on the sunlit roof patio overlooking the Cusco rooftops. I’m disappointed to find two people already settled in both seats. Evan and Daniel an American and Argentinian on the patio were drinking Matte through a combined spoon straw, the like I’ve never seen before. They offered me some, breaking through my tacit resentment. The ornate cup is packed with leaves so I couldn’t see the liquid, I gave it a stir with a spoon and asked: “Do you eat it?” Apparently, it is a faux pas to touch the spoon and you simply drink the tea through the flattened handle that was also a straw and pass it around. Kind of a tea version of a bong. Offence may have been made but I noticed the sun was still out and the world was still spinning. There seemed to be no serious side effects. 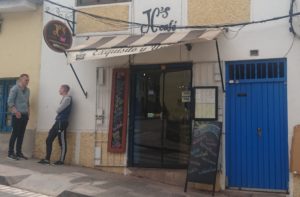 Mon 16th April, JC’s Cafe is at the end of the street. One of the best cafes I’ve ever visited. Needless to say, It’s the first destination for the day for breakfast and coffee. Abierto 8:30. Which means opening time randomly between half eight and nine. This morning I delay my breakfast and order a coffee anticipating company, Engrossed online, I’m suddenly swamped by curly hair and a warm hug. I had my back to the door and hadn’t noticed Rosalie’s arrival.

This is a stark contrast to the time I voted against her joining Pantelisa back in Martinique. This is the third time fate has brought us together since then. Aloha Ke Akua, Nuevos Horizontes and now Cusco. For today, breakfast is a shared pleasure as we exchange our individual experiences since we’d last met.

Rosalie had booked an even cheaper hostal than mine in the heart of San Blas, a bohemian collection of narrow cobbled streets full of cafe’s restaurants and Peruvian souvenirs. I thought of relocating there but my motorcycle anchored me to Pununa Wasi. And, anyway, Rosalie was only here for 5 days and I’d also be on my way shortly after.

Wednesday Morning 18th April, I meet Rosalie at her hostel and we walk a few blocks down to the collectivos, shared people carriers and minibuses. We wait for a while for more passengers before a third joins us and we’re off, along the twisting road along the Sacred Valley of the Incas to Pisac, a small town east of Cusco in the sacred valley. I had skipped breakfast so first stop was something to eat and a coffee in a small square of sunlight in the courtyard of a coffee shop on the way to the Plaza de Armas.

Pisac has a relaxed and laid-back 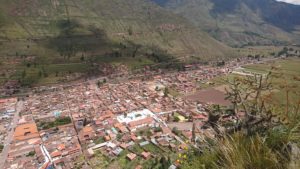 vibe. The market is huge, full of Peruvian colour, but apparently not many customers. Rosalie asks the Tourist Information official about the free options around Pisac. There are two: a Community Museum and a Botanical Garden. We walk up the hill along the cobbles until we get to the ticket office at the foot of the mountain path. 70 Soles for a 2 day ticket along the Sacred Valley. Rosalie emphasises we are only here for one day and, after a pause, the ticket clerk offers us a two for one deal, no one will check tickets on the trail, and we start to climb the path to the Inca ruins of Pisaq Old Town in the mountains. 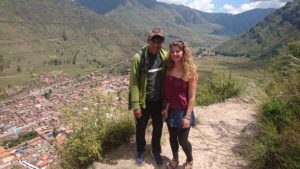 A few minutes up the dusty path, we encounter a young Peruvian with his backpack sitting on a rock in the shade of an outcrop. If this were a movie, it would have been an implausible introduction to a new character. It was almost as if he was placed waiting for us. Inti speaks fluent Quechua, Spanish and English and happens to be a tour guide on his day off. He invites us along to Pisaq Old Town with him and points out places of interest along the mountain path. The Incas built their settlements high in the mountains, the Spanish built theirs in the Valley. The Pisac we see in the valley is a small town of Spanish origin.

Further east along the river is a small suburb, separate from the main town. Apparently, an expat community of Europeans. Expats being people we label back home as immigrants… 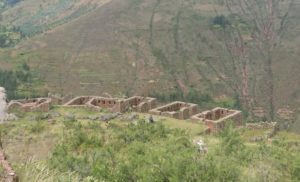 The ceremony ends after about 10 minutes and we part company, promising to visit his shop on the way back to the collectivos. Rosalie and I climb the steps to Intihuatana and then further on to the peak and gazebo with the view of the terraces. Over the stream, behind the terraces in the cliff face there appear to be doorways in the cliff face with no pathway up or down to them. It looks like a vertical community but it turns out it’s an Inca cemetery.

This was the end of the walk, according to the map and we return, skirting the large peak, with its gazebo, and taking the route via the watchtowers overlooking the gridded streets of Pisac. We were both now hungry and dined at a vegetarian restaurant before cramming in a visit to the local community museum and then arriving at the Botanical Garden Gate just as the caretaker was closing it.

No matter, we noticed a quaint coffee bar and hostel on the way that had a balcony overlooking the gardens. We squeeze past some weathered hippies obstructing the balcony doors and enjoy a pretty ordinary coffee. The setting was the thing: birds in the trees, a hummingbird sipping nectar from the blossoms. A perfect break before heading back to Cusco.

We had promised to visit Inti’s shop and we headed to the collectivos, circling via the riverside where he said it was. We never found it. The sun was dipping below the horizon indicating an ideal time for abandoning the search and calling it a day.

“Cusco?” An eager Peruvian stepped across our path indicating a full collectivo ready to roll and pulled out into the street as soon as we squeezed ourselves aboard. 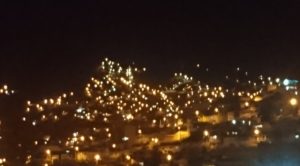 Darkness had fallen on the sparkling cityscape of Cusco. The intention was to end the day with a craft beer at Eusebio & Manalo, except it was closed. Instead, we shared a litre of Cusqueno Trigo wheat beer back at Rosalie’s hostal.