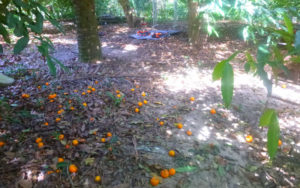 I LAY IN bed imagining the distance of the fuel gauge from needle to empty and distance from Porongo to fuel stations on my Android apps. The nearest were 6km in La Guardia fording the river. The nearest over the bridge was 26km. I wasn’t sure I’d make it that far, the speed the needle drops on the lower half of the gauge. The thought was debilitating but there was nothing to do until it came to moving anyway.

The next morning, after fruitlessly cycling thoughts through the fuel conundrum, I emerge out of the tent into the cool shade of the tangerine trees, breakfasting on their generous fruit off the leafy floor, I set off walking to take a 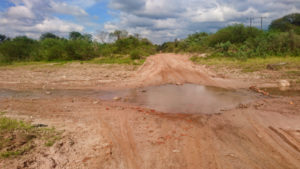 look at the river crossing. 2km, the GPS told me until I’d already walked a kilometre into Porongo, which by then had changed to 4km. Sticky humid air under an overcast sky stuck the t-shirt to my back, reminding me of my work in the sweaty oil fields of East Texas back in 1982. The round trip would now be 8km instead of 4. Still, I had all day.

The block paving of the Porongo streets merged into the rust-red sand, at the edge of the village, deeply rutted in places by the tyres of heavy trucks. Walking was easy but dull on the dead straight dirt track. Eventually, I reached a ford, a stream about two metres across and 5 centimetres deep. The GPS app put me on a river bank at least a hundred metres wide. It didn’t tally with the amount of water I saw yesterday at the crossing further upstream or what was on the screen. I scratched my head and turned round to go back. I didn’t know at the time but two hundred metres further on would be the ford across the river 30cm deep and about 80 metres across.

I noticed a sign in Porongo hanging on a bungalow “Hay Gasolina.” My saviour. I could fill up here and thus relaxed into village life and watched Belgium beat Brazil in the world cup quarterfinals at the local restaurant while feasting on yet more chicken, rice and fried banana. It seems whatever I order, it consists of chicken, rice and fried banana. How about some fish and chips or burritos? 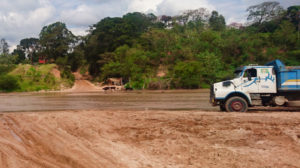 Stripping all the straps and remaining luggage off the bike the next morning I set off to the river after Giulio told me I must have been at the small river, not the main one. He was right. I fought with the loose sand along the track and the bare riverbed and sat at the water’s edge to watch traffic cross. I waited a while and saw only a lone cyclist push his bike across the knee-deep flow.

I turned round to visit the bungalow with the ‘Gasolina’ sign. “No! No gasolina!” There seems to be a common habit of displaying signs for non-existent goods and services. I can see the logic for cafes advertising WiFi for attracting disappointed customers but a bungalow that has nothing else for sale? How about taking the sign indoors. Eventually, I found a motorcycle repair shop around the corner from the restaurant that had petrol in two-litre mineral water bottles. I was saved and celebrated with another meal at the restaurant They didn’t have what I ordered yesterday so I ordered something else and got chicken, rice and fried banana with a different sauce on the side while watching The Simpsons dubbed in Spanish.

Instead of El Simpsons, I watch the policeman at the crossroads trying to work out why he was posted there diverting traffic from entering the empty plaza via a full-width road with no traffic passing either direction. I guessed the stretch was a one-way street… with hardly any traffic… why? The following night I ride to the store to buy some water and do a u-turn in the Plaza on the journey back. A local flapped his arms frantically trying to get me, the only vehicle moving within a quarter of a mile to turn round. I returned to the campsite without passing another vehicle. 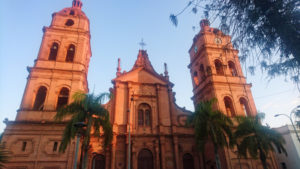 Refuelling gave me the freedom to run in and out to Santa Cruz and explore the city centre. I got to know which streets weren’t amputated with an improvised dead end or disempowered by a “no left turn.” Many of the crossroads looked like four-way stop junctions but without the stop signs. Seems to be that the bravest goes first. The best strategy for me seemed to be, keep a good rolling pace slow 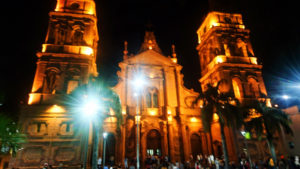 enough for an emergency stop but fast enough that I could gun it through and be clear pronto once I was sure there was no traffic within striking distance. I memorised the easiest route to the central plaza and found the customary Irish Pub that seems to sprout not far from South American Cathedrals and Plazas.

Many travellers have spoken of visiting Santa Cruz but, being here, I haven’t seen any. Probably the least touristy city I’ve been to so far. I like it here even when the cold snap arrived extinguishing the pleasant balmy t-shirt climate. The wind came out of the south, I imagined from the cold plains of Argentina, and threw the bike weaving from centre to verge along the road to Santa Cruz. It was cold now, I had to break out my padded coat from my improvised pillowcase in the tent then empty the pockets and stuff it back in come bedtime.

Giulio, the host is a good friend now. He gave me a tour of his new land purchase near the national park where he plans to build tree houses to let out. There is evidence of growth and development in the area and when they build the new bridges across the river, land prices here will soar. I got to hang out with his friends in Santa Cruz, as we cheered on Belgium against France in the World cup Semifinal.

The wind dropped and the sky cleared but it was still cold. I stay one night in the appropriately tangerine coloured VW Combi, which was more comfortable and not quite as chilly. I decide to stay for the England semi-final leave the next day eastbound 750km toward Brazil: a three or four-day trip before my Bolivian visa runs out. 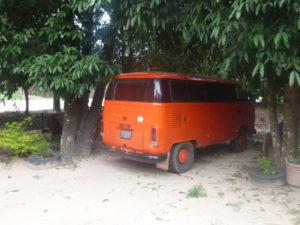 9am, I meet the landlord’s elderly father entering the gate come to feed the pigs with the scraps from the restaurant he runs in the village. A cheerful man wishing me “Buena dia.” they knock the s of the greeting here. I warm myself on the chair on the porch receiving the full beam of the morning sun, while peeling a third tangerine still spitting the pips out from the second before riding into Santa Cruz for breakfast and watch Croatia beat England in the world cup semifinal. The other plans I had for being online evaporated along with England’s 1966 dreams.

The cold snap passed and the wind dropped to a calm comfortable evening and I ride back to Porongo with the sun kissing the mountain tops on the lilac dusted horizon. It’s rush hour in Porongo and I pass one Mazda pickup and one Ox-drawn cart of tangerines as I ride to the moto repair shop to refuel with three 2 litre bottles of petrol. Returning to base camp, the host is away, which means no access to the shower since it’s locked away in his home. I would quite like internet access now I’m refuelled and relaxed. There’s no access to it anywhere I know of in Porongo and it’s not worth the 25km ride back to Santa Cruz.

I browse through the maps on the phone. The destination I select as my next target is Hotel Villa Chiquitana in San Jose de Chiquitos, 300km away. The reviews tell of this four-star hotel permitting tents pitching on the extensive lawn down by the swimming pool. If I make it in one jaunt it will be the furthest I’ve ridden in one day in South America, or ever on a motorcycle under 900cc. Weather shouldn’t be a problem and the road is as straight as anything I’ve seen on the flat plains on the altiplano but then again, I expected an easy day of Samaipata to Santa Cruz.

I’m often reluctant to get moving. I get to know a place and end up liking it then I have to give up all that investment and step into the unknown once again. It rarely feels exciting. It takes a good couple of hours to pack away, I’ve left everything to the last minute as usual, due to my dislike of packing. I promised myself one last breakfast at the AME cafe twenty-odd kilometres away in Santa Cruz and it was already 11.20. I’d yet to roll the tent up into its bag. 11.30 and I’m hammering along the road to Santa Cruz. I’ve got to know every bump and bend in the last 5 days and lean the fully loaded Yamaha over as far as I dare around each bend and try to counter fear induced stiffening of my arms and upsetting the balance of the bike. 11.55 I stroll into the AME Cafe and get my order in for an Americano, chicken and banana free breakfast before the noon deadline…