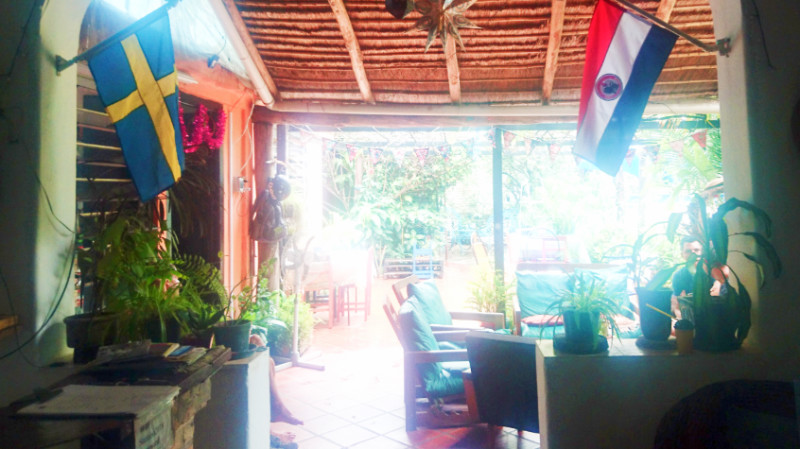 SUNDAY MORNING DAWNED beyond the wooden shutters of my darkened dorm at the El Jardin, and I emerged into retina-searing sunlight for breakfast. A table in the corner presented a selection of items nestling under tea towels to keep the resident quartet of flies from spoiling it. A fan helped keep them away while gently drying out the cakes and crusts of bread. Cornflakes and cold sour coffee assaulted my taste buds. It wasn’t until I tasted the cornflakes that I realised that the anonymous-looking yoghurt was not the same as the anonymous looking milk sitting next to it. 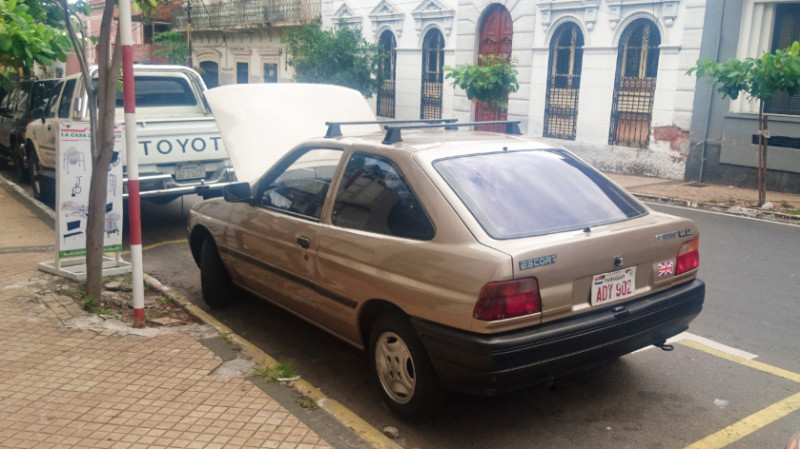 John picked me up for the church service at the Bruderhof community at Primavera House. Opening the door to the street revealed the unexpected sight of Manuel’s Classic Mk5 Ford Escort in Aztec Gold (or as I call it, metallic beige.) Even so, it’s a generous loan by Manuel that opens up all sorts of options for our stay in the capital. The car’s existence defied Ford’s reputation for limited longevity and this particular model still appeared to be nimble enough to escape the local motor museum or scrap yard. We kangarooed our way across the grid of streets to Primavera House in traditional style… 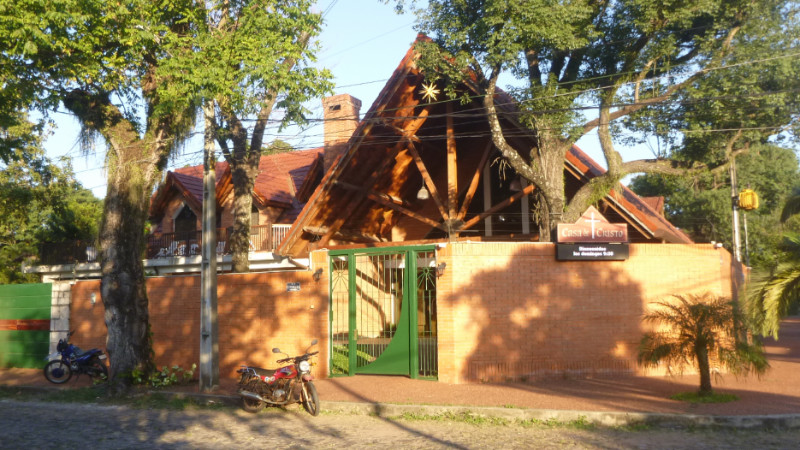 Of course, John’s friends are here but I was welcomed just as warmly as a stranger. The people seem as happy here as anybody anywhere, maybe more-so, although I confess I find it difficult to tell whether a salesman’s smile is because he’s genuinely happy or he just has something he wants to off-load for a profit. Still, the warmth and peace I sensed were almost tangible.

The men dressed in modern casual clothes but the women wore long dresses and headscarves that reminded me of how the Amish dress. Back in the days when I considered myself a devout atheist, would have avoided attending at all but that inverted self-righteousness is no excuse for me to remain ignorant. People get what they get from how they interface with life and spiritual matters.

John became an invaluable guide, as Asuncion doesn’t offer much of itself to tourists as a City. Over the following few weeks, I discovered that the beauty of the place isn’t in the landscape or architecture, it is in the hearts of the people. After a couple of weeks of settling in, I felt at home. There was no urgency for sight-seeing. The tacit, cheerless staff seemed to accept me like a stray cat allowed to wander the garden. They weren’t really cheerless, they were just relaxed with who they were.

Time was taken to visit people and John was busy helping friends and a poor family build a house. Sometimes I tagged along, sometimes I found my own entertainment.

I was fascinated by the Museo de las Memorias covering the 35 year period of the Stroessner Dictatorship. I’d never heard of him. Pinochet, yes, Stroessner no. Everything looked as if it had come straight out of the cold war times of Eastern Europe.

We limped around the city in Manuel’s geriatric Ford, meeting new faces from pioneering places and historic times. I get the sense that Paraguay is one of the last places on Earth that still grows through long lost times we look back on in Europe with nostalgia. Family and community are still important and valued here. Back in the UK, we rarely know the name of our neighbour.

John had a lot to do and seemed concerned about abandoning me. I didn’t mind – I got to discover things without any other worries or attachments that being in company brings.

It wasn’t until taking off on my own that I got to imprint the layout of Asuncion’s streets in my consciousness. Being a passenger in tow fosters no sense of direction or location. 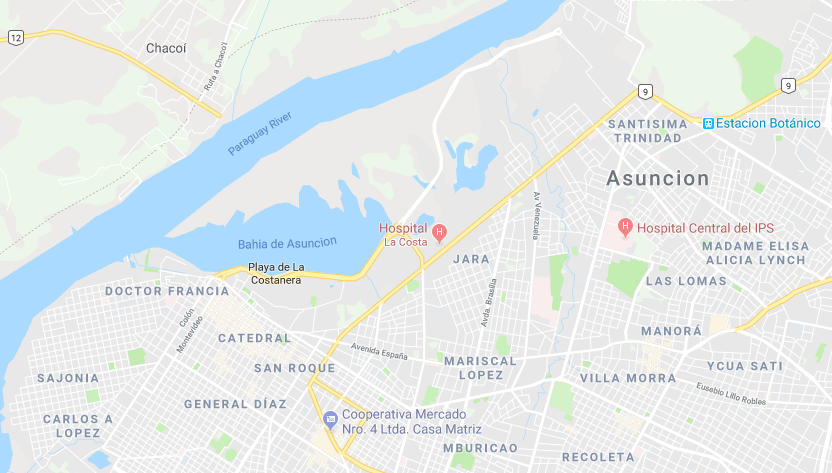 To the west of the El Jardin was Downtown Asuncion and to the east were the suburbs including the Chacomer Yamaha Dealer, Primavera House and various air-conditioned shopping malls.

I was surprised at how few people speak English in this capital city but John’s Spanish is good which both took away the pressure of trying to communicate and slowed my learning of the language. When I travel alone, I hardly speak anyway, which should be no excuse. 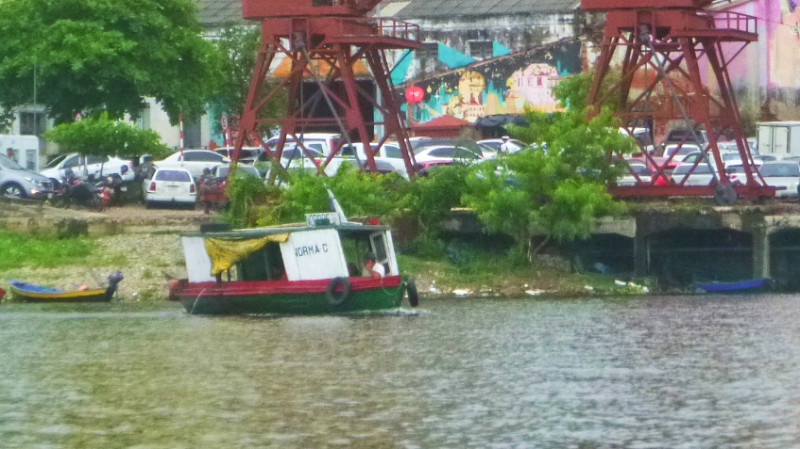 Across the river to the west of Asuncion is Chaco-i, a small riverside village. The roaring diesel of the water taxi trying to shake itself off the mountings while beating its high decibel rhythm on our eardrums ferried us across the river and up the shore a little to the boat that Claudio built. John discovered him a few years ago hidden in the woods working away like Noah on his Ark. Claudio spent 10 years building a yacht in the woods of Chaco-i with the dream of eventually sailing it down the might river Paraguay to the sea. “How will you get it to the water?” asked John. There was no easy way to get this Ferro-cement monster through the trees and down the bank but I think his intention was that it would float out on a flood when the time was right. 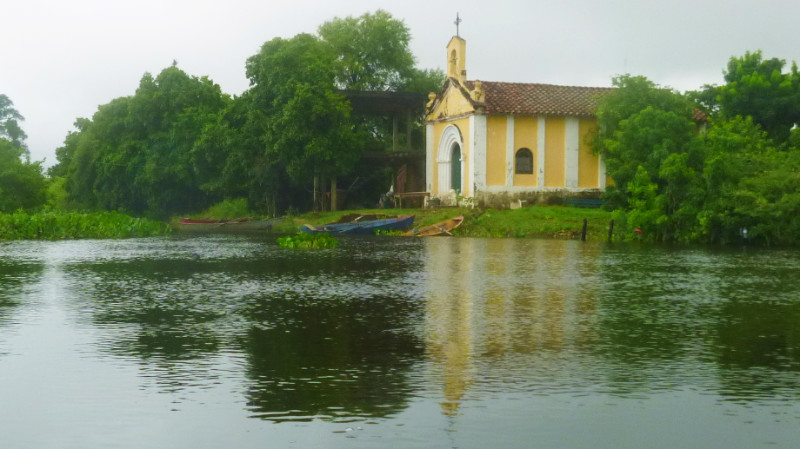 The boat was almost complete, laying on its starboard side but still lacking sails. John found some used sails cheap in Panama where vessels refit before continuing along the canal to the Pacific and dragged them through excess baggage rules all the way to Chaco-i to discover Claudio had died of a heart attack working on his boat only a few months previously.

John hardly recognised the route, the River Paraguay being seven or eight metres higher than normal. the small brook that led toward’s Claudio’s boat was now a broad river and John bribed the river taxi to beat its diesel tattoo up the tranquil new tributary to save us possibly wading through the woods. 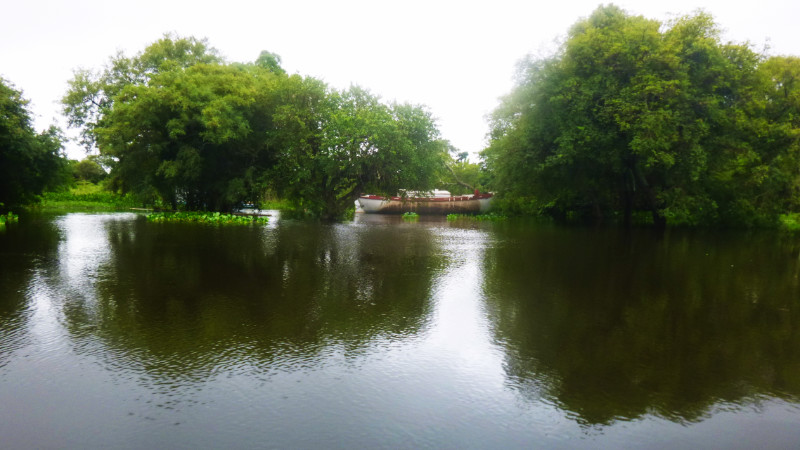 And there, through the trees, was Claudio’s legacy before our very eyes. Peacefully floating in the flood water Afloat in the garden wearing the mud stain on the hull like an emblem of unshakable faith. Afloat in the woods, where Claudio had invested the last chapters of his life. 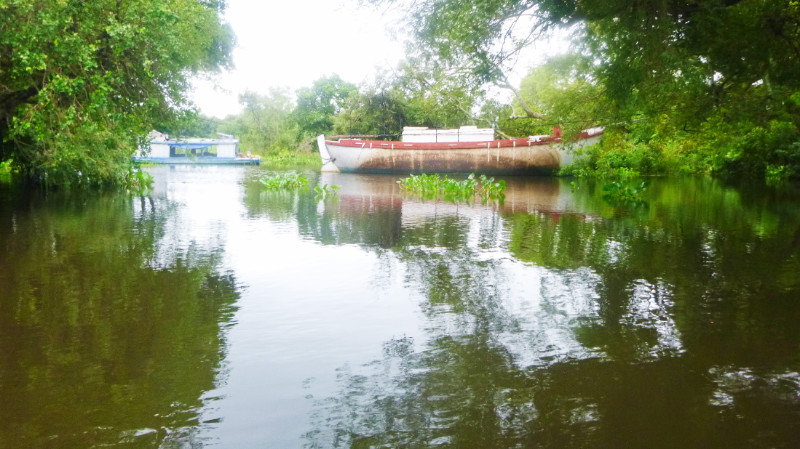 John said he died in the process of his dream and we shouldn’t be sad. Even though I’d never met the legend that was Claudio, I felt real emotion for him.

It’s a metaphor for life, in a way. Apart from those of us that are eaten away slowly by progressive diseases or time itself, few of us are never really finished before we pass. Loose ends are left hanging. messages left unsaid, money left unspent, bills left unpaid, dreams left unlived. Up until now, I just thought this was an interesting story, but seeing this ghost-ship floating in the woods left me with a profound regret that the man was no longer around to meet face to face. The boat, being the symbol that all we leave behind, carries on without us before they too pass in their own time and we ourselves are eventually forgotten… 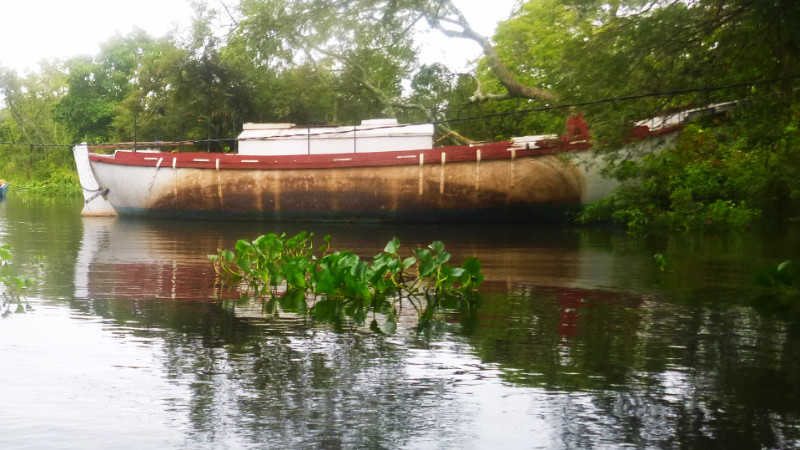