A Place in the Pines 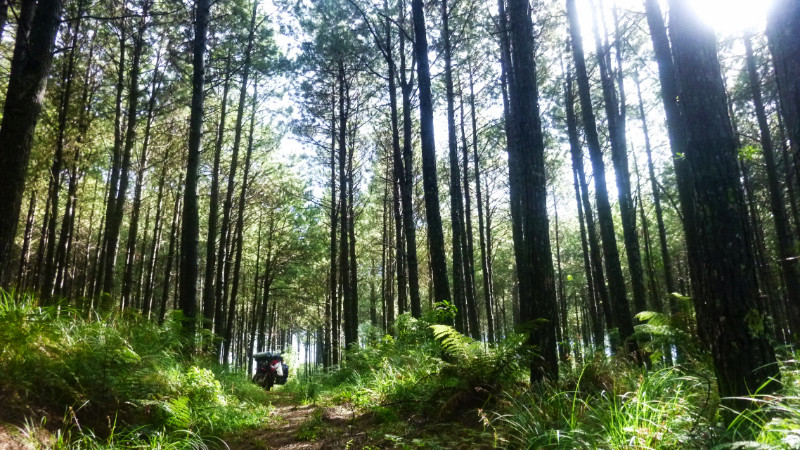 I awaken to sun filtering through tall pines, scattering luminous yellow patches dancing across the fabric of the tent. I lay there for a while, listening to the sound of the distant traffic ebb and flow. Unzipping the door reveals a picture perfect woodland morning and after a few handfuls of peanuts for breakfast, I’m up and out for the tedious task of packing away. 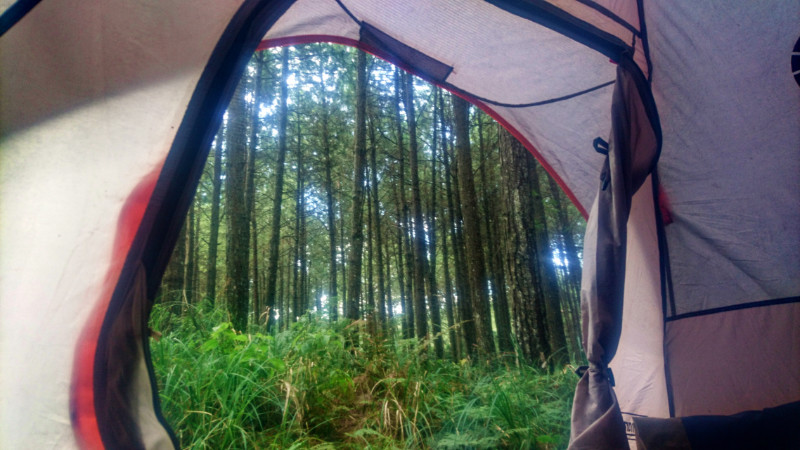 In the distance toward the road, I see two men on the trail near the edge of the woods but they don’t look my way. I don’t know what they are doing but they are gone by the time I’m ready and wobble through the channel through the undergrowth. Engine still cold and underpowered, I have to gun it up the slope to the road and I just have enough power to make the grade and just enough grip to stay upright along the slick muddy incline out of the woodland shade and into the sunlight. 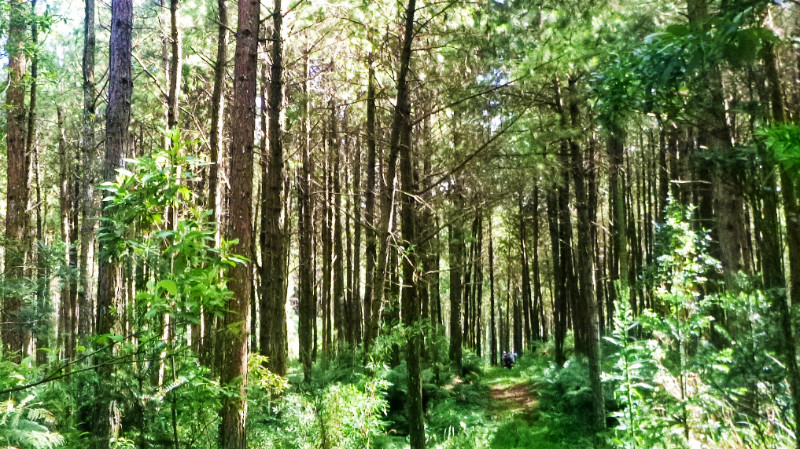 Through the gap in the long grass, I have to stop my front wheel on the edge of the asphalt and bend over the handlebars for a clear view of the road, nothing is coming and I lean left towards Caçador and give the engine a burst of throttle.

I’m feeling buoyant in the dry warm sunlight and weave around the pale grey asphalt in a joyful 70 km/h slalom around the potholes. It’s 250 km to Rio do Sul and I settle down into the saddle with the harmonious hum of the Yamaha motor and flow with the intermittent traffic in the warm Santa Catarina sunshine.

I probably had lunch along the way, I don’t remember. Most of the day was a dreamlike drift in the sun, mostly on autopilot while my mind wandering elsewhere left my body to handle the controls of the bike.

Early afternoon, I notice brown Turismo signs, “Vale Europeu” and the route tips the balance to more tourism than agriculture. The traffic thickens along with the number of properties lining the road and I arrive at Rio do Sul failing to notice any camping opportunities between the fences along the way. 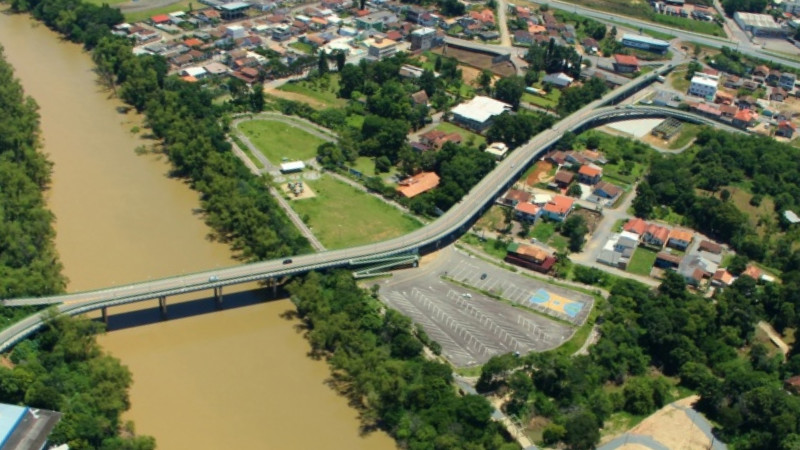 Harry Hobus Park is highlighted on iOverlander and after falling foul of the one-way system sending me south of the river over the bridge directly over the park, around a loop, back over the bridge into the other loops on the northern bank, I finally coast under the elevated causeway into the car park tailing a police car on patrol which circles the car park like a shark cruising for easy pickings before swimming away again…

The car park is huge and, now past 5 pm, the park bustles with people. As described on iOverlander, there are toilets, showers, bar and restaurant nearby but nowhere obvious to pitch a tent without becoming an instant celebrity.

I park the bike amongst the local scooters at the entrance to the car park and walk around the central area where the showers, seats and teenagers on phones huddle in the shade of the bridge. I dawdle around the perimeter looking for a crack in the scenery to hide a tent for the night. A jogger stops to ask me about the bike. I’m amazed, the bike is now 200 metres across the park from us. I’m more noticeable than I anticipated. I doubt whether he ran around the track especially to talk to me but he obviously noticed my arrival. We talk for a few pleasant minutes before he jogs away. I consider whether I have the audacity to camp on the soccer field. The park is teeming with urban life, cyclist, joggers, dogs and families. Camping in the car park with a motorhome? Perfect. Tent on the field? Asking for trouble. iOverlander, after all, caters for motorhomes. I travel on its coattails.

Disappointed, I wander into the bar for a consolation cold beer and emergency WiFi, scrolling around iOverlander on my laptop working out where to pitch for the night. Akaiaka is 9km northeast near Lontras… perhaps I’d find somewhere on the way otherwise it’s an unwelcome dent in my meagre budget on my way to the coast.

I reluctantly press the starter while hanging on to the mood to kick back and relax. These times are dangerous for motorcycling. the beer didn’t help, but I maintained conscious awareness and patience. There is no rush and the impatience is a rogue emotion.

Rejoining the 470 is no easy task. Unable to reach the elevated eastern carriageway through lack of a ramp and passing under the bridge, forbidden to cross the traffic to join the westbound ramp forces me North to a U-turn a few hundred metres further up and on the way back I miss the turning west and get trapped in the Harry Hobus one way system once again. The second lap I get it and I’m westbound in the wrong direction but at least on the right road. I notice a sign “Returno 2km.” 2km in the wrong direction is a long way: 2km there and 2km back: double trouble. I scan fore and aft for traffic. Nothing is coming and swing a U-turn between the raised lane dividers and resume my heading east.

Vale Europeu continues much the same, a suburban alley of pines, advertising hoardings and private property channelling prospective customers along a gulley of recreation-based commerce. It seems every millimetre of land is bought and paid for, either private or reserved for paying customers. Without any hint of squeezing in a solo camping opportunity. 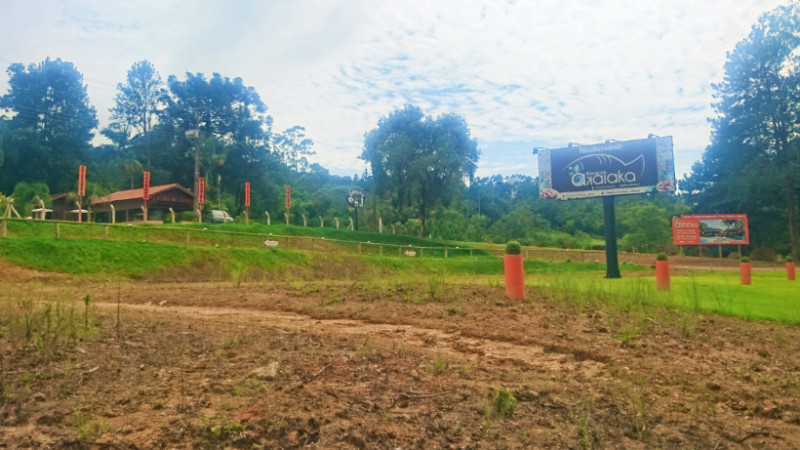 I spot the Recanto Akaiaka sign on the left well before the turning and pull over to the hard shoulder on the right to examine the entrance and wait for a gap in the traffic.

There’s a Cafe up the gravel drive not far from the road and I cross the highway through the gap in the traffic to crunch my way up the gravel slope and pull up in front of two young guys sitting outside the cafe on the customary Latino plastic patio chairs. A little English is cheerfully spoken and I’m directed up to the main Restaurant near a copse of pines. Karin and Mauricio come out to meet me and wrestle with google translate for a couple of minutes before calling their son, Tiago and his wife, Danusa, from the house further up the hill. 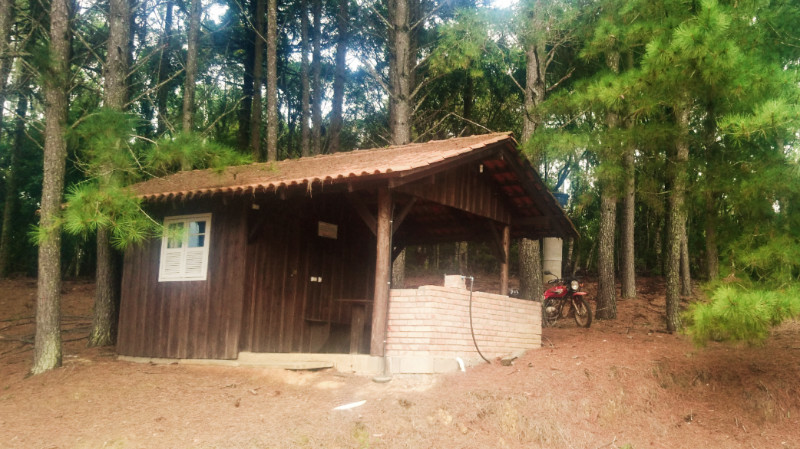 Tiago speaks fluent English, although rusty with disuse, and says I can use one of the cabanas. I say I’m fine camping, but my hosts insist and raise their hands with fingers pointing down in the universal sign for rain. “Chuva” they say. and they say for free when I ask how much. The condition is that I eat in the restaurant. It’s a fair deal. I’m hungry after my recent diet of peanuts and rolling countryside. 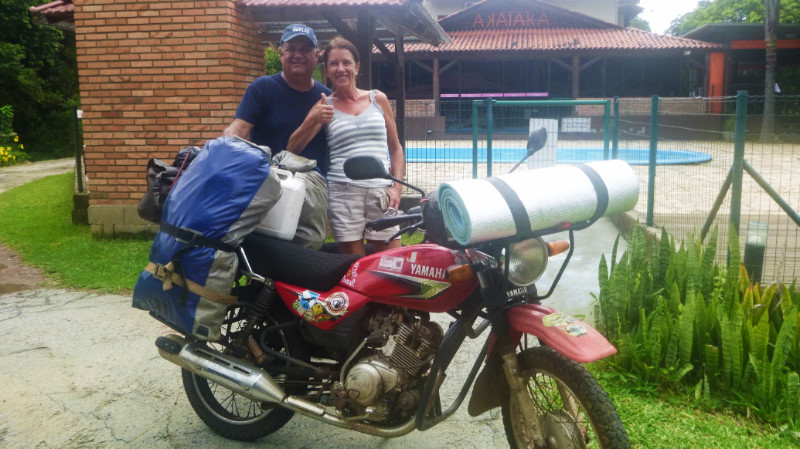 Akaiaka is a popular restaurant and I can taste in the food the reason why. This is luxury living, especially compared to recent days. Finishing the meal and catching up on messages, I retire to the cabana. A nice soft mattress, electricity, and shelter from the storm that rattles its chuva all over the roof. I flick off the light and watch the square of the stroboscopic window flashing from the storm behind the curtain. Thunderbolts and lightning… and I fall asleep with Bohemian Rhapsody on a loop tape inside my head. 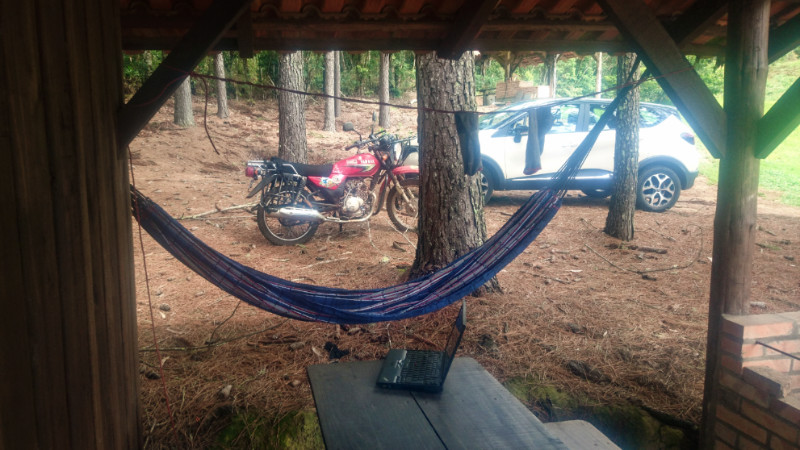 Sunday morning brings sunshine and I ask if I could stay another night if I buy another meal. The restaurant is closed so I offer to pay but they won’t have it. I feel like family and humbly grateful. The son’s cafe near the road is open until 7pm, so I eat there instead and get to know Marcelo and Laura who seem keen to learn English.

Sunday 13th January, I breakfast at Marcelo and Laura’s cafe until late morning and then lounge in the hammock. I’m invited to join Karin and Mauricio for beer in the afternoon down at the Cafe after they finished the cleanup at the restaurant. Sunday dinner was a blockbuster with over 200 people. I wasn’t surprised by watching all the cars coming and going between snoozes in my hammock. 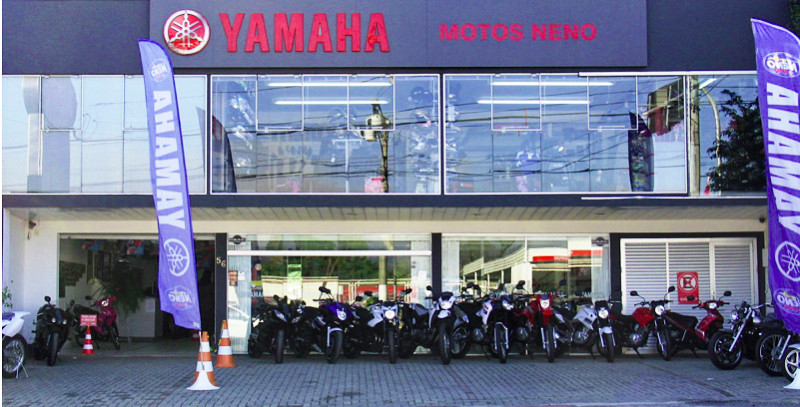 Over a beer, I meet Neno. Neno owns the Yamaha dealer in Rio do Sul and Blumenau, a successful motocross racer, having ridden to Alaska and back. He doesn’t speak English but was translated for asking if I needed anything sorted on the bike. I couldn’t think of anything and forgot to ask where the mixture air-fuel mixture pilot screw was on the carburettor. And the main stand is bent leaving both wheels on the ground… It doesn’t matter. The bike is running fine.

I’m promised a tour of the dealership the next morning. Something I look forward to and gratefully acknowledge. 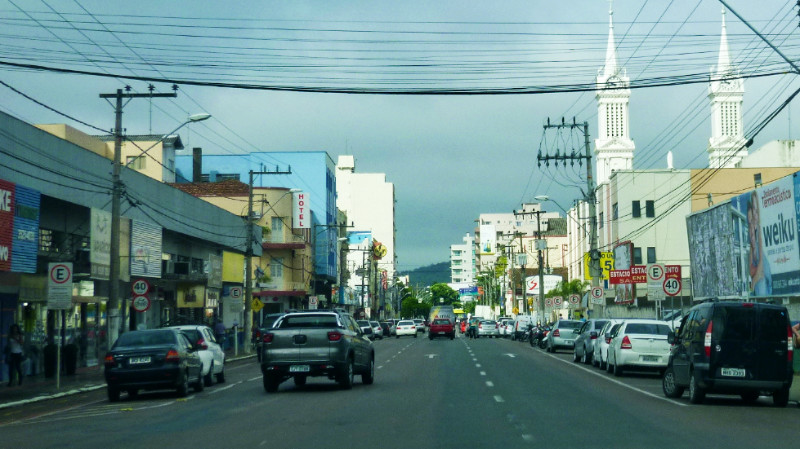 In the morning Mauricio takes me to breakfast in Rio do Sul. It seems everyone knows everyone and I listen to the Portuguese bounce around the cafe, kind of knowing the tune but not the lyrics. Then to Neno’s dealership and onto the grand church of Rio do Sul then the waterfalls on the way back as well. I’ve had the VIP treatment. I like it here and it’s hard to leave. 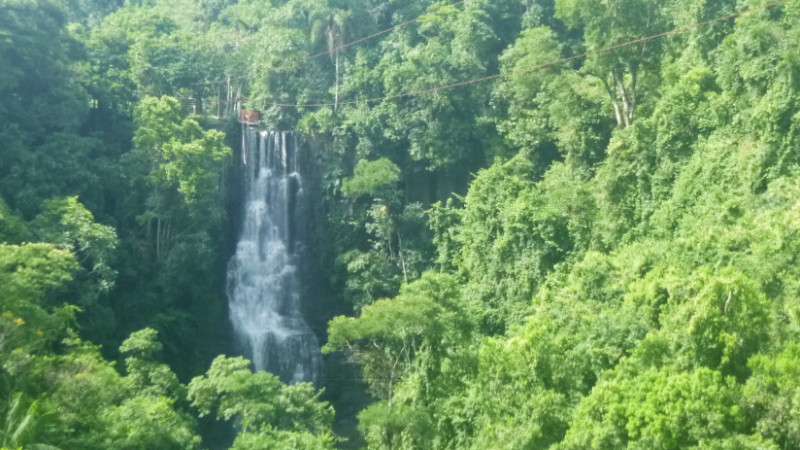 After a fond farewell, I’m directed to Blumenau and weave down the gravel track to the road and blend into Monday’s eastward flow of traffic along the Vale Europeu… 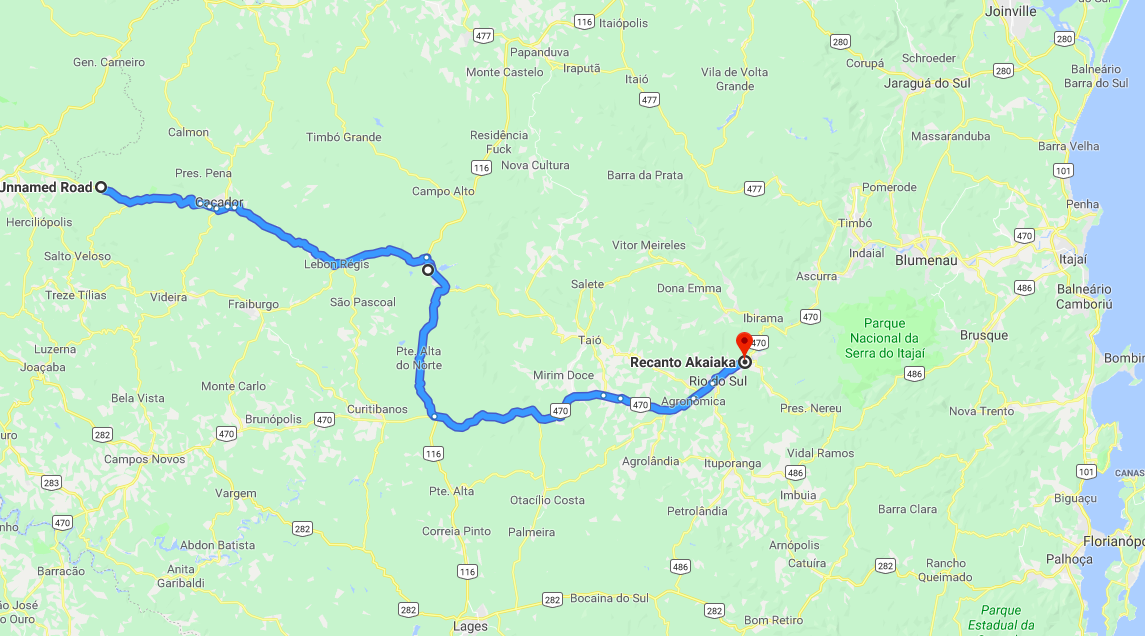