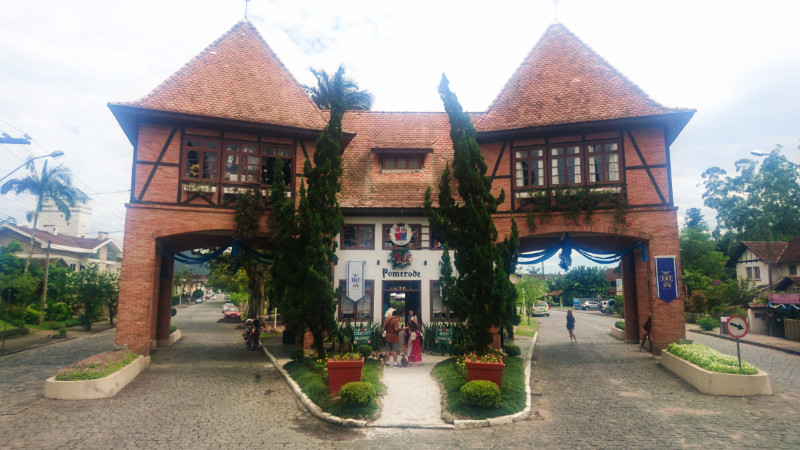 The road approaching Blumenau stacks with crawling traffic and I traverse a busy roundabout to stop in the shade of some trees just past the junction to see whether that was the one for the centre. A Honda with a young man and woman on the pillion, Bautista and Maria, pulls up alongside and we chat about my journey and their trip to Ushuaia. They disappear into the traffic and after a couple of minutes return to hand me a 20R$ note. I feel very moved by that gesture.

I tuck away the note in my wallet and U-turn to join the traffic queuing for the roundabout and turn south across the river toward the centre. It’s the usual introduction to a city’s one-way system. Never the most enjoyable experience. eyes are needed all over the head to watch for signs, junctions, the direction of parked cars – indicating the likelyhood I’m about to drive up a one-way street- traffic ahead and traffic behind. 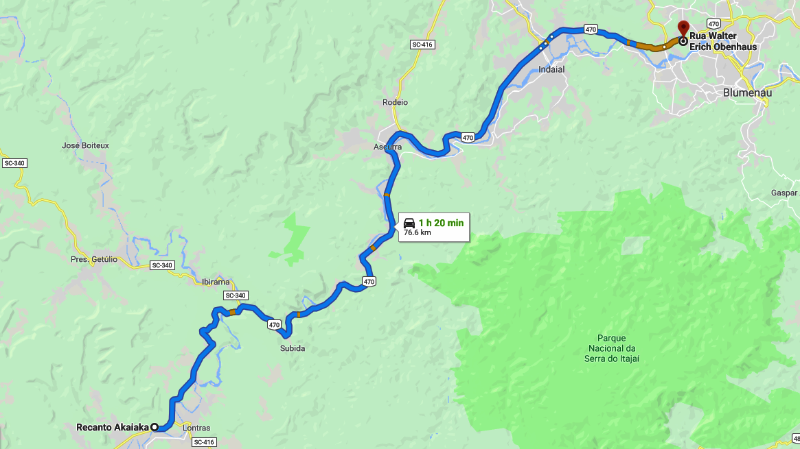 Usually, locals know these roads well and drive at the maximum speed leaving little quarter for newcomers feeling their way around.

It’s Monday. Monday is like ‘Sunday Lite,’ in South America but this one is also a holiday. There’s a beer museum next to the restaurant I want to go into. The museum is closed and the parking bays are all empty but the signs expressly forbid motorcycle parking. It’s difficult to find a cafe where I can keep an eye on the bike until I pass Vila Germanica to find Fritz Saudavel opposite the Ramiro Ruediger Park. 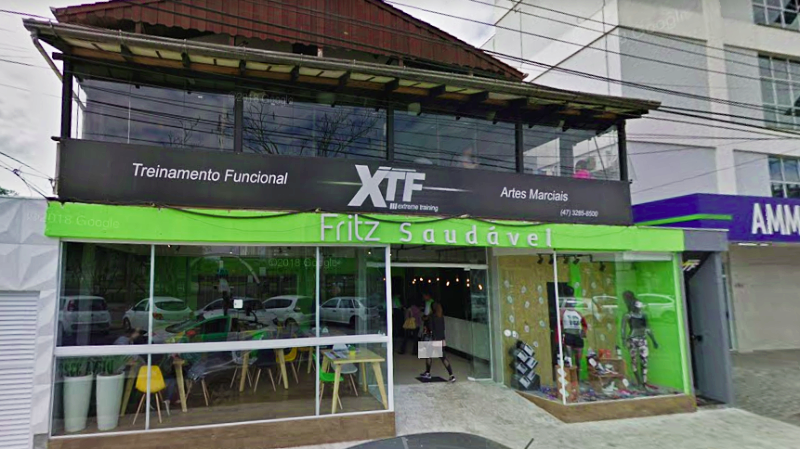 Tapping into the WiFi, I scour the internet for accommodation that fits my budget. There would be no camping in a city this large. I locate a sweet sounding pousada back over the river on the northern perimeter of Blumenau, Le Petit Cherie. I fight my way out of the one-way system and cross the river to the busy route 470 and cruise along the commercial zone bursting with car dealers to find a steep slope that is the “Rua Walter Erich Obenhaus” leading to the pousada.

I found the road easy enough but the pin in the map for Le Petit Chérie is wild woodland in reality. Around the bend at the top of the hill is a neighbourhood of a dozen or more houses and there is no sign indicating a hostel or pousada.

Halfway down the steep slope is a possible candidate, tucked in the woods but with a firmly closed security gate. I cruise up and down the hill a few times before stopping to gaze at the house in the trees again. It’s the only house on the same side of the road as the pin but it doesn’t look like a pousada.

Across the road and behind me is a scrap metal merchant and someone comes out to find out what I’m doing. I explain and show the young man the map and he doesn’t know of any hostel. All the staff here are curious now and chattering and shrugging with each other. The young man offers to help and gets his motorcycle to ride up the hill. We don’t find anything but he asks someone in their garden and they say something in Portuguese pointing to the corner at the top of the hill. We park at a big white gate at what looks to be a private secure house, opposite and just around the corner to where the pin is on the map.

A man opens the door, says something and shuts the door again. Not sure whether he said he didn’t know where it was or not and retreated indoors, I waited with my guide and Roberto reappears a moment later fully dressed welcoming me to Le Petit Chérie. I shake my guide’s hand before he rolls down the hill back to work.

Roberto works for Civil Defence, mostly at night so we probably disturbed his sleep. I get shown a dorm opposite the house and Roberto says 25R$ a night. I tell him Booking.com had it at 27 and gave him that intending to stay for one night. 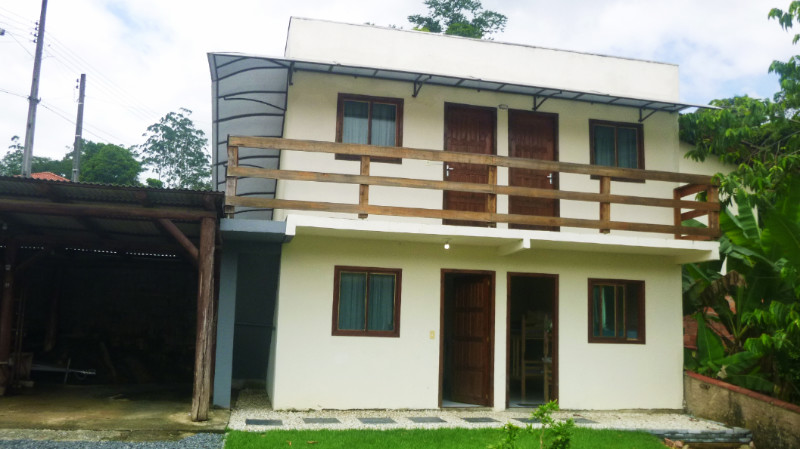 Compact but clean and perfect. It’s always a relief to find a new sanctuary in an unfamiliar area. It’s a four berth dorm but I’m the only guest so it’s as good as a hotel ensuite. The temperature is a lot warmer than it has been since Foz do Iguaçu. I unpack the bike and strip down to t-shirt and underwear and sit back on the bed in the stream of cool air from the fan plugged in next to the bed patiently working with the patchy, lethargic internet

The warm humidity gives way to the welcoming cool of a thunderstorm. Relief for me but not for Roberto, as flooding takes him off his vacation and back into Blumenau for work overnight.

The next day is bright and warm and I decide to stay another night and take a ride down the road to see if I can find some faster internet for updating my blog.

Norte Shopping Mall on Ruta 470 is a giant characterless edifice in the style of the Malls I’ve seen in Texas. It’s air conditioning and food hall make for a good working environment though and I catch up on a few hours of editing, publishing and uploading photos. 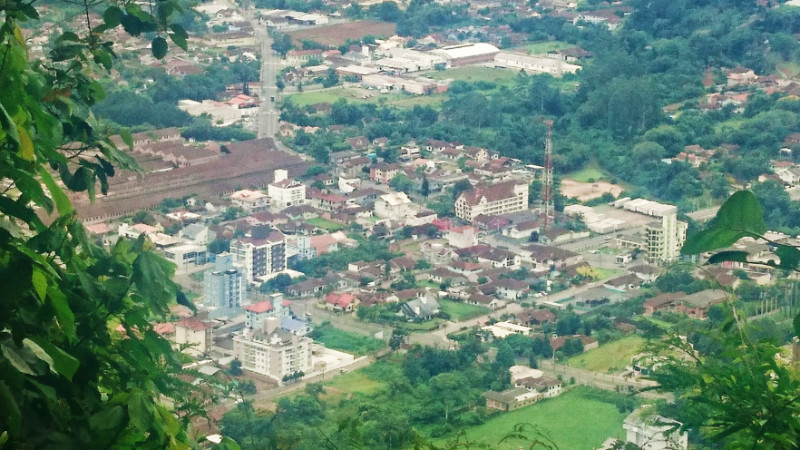 After dark, Roberto and Sonia invited me into their house to try the local beer. their English is good which makes for an easy night for me and I revel in their warm and friendly company. Receiving tips for visiting Pomerode and its delights prompt me to stay another night. 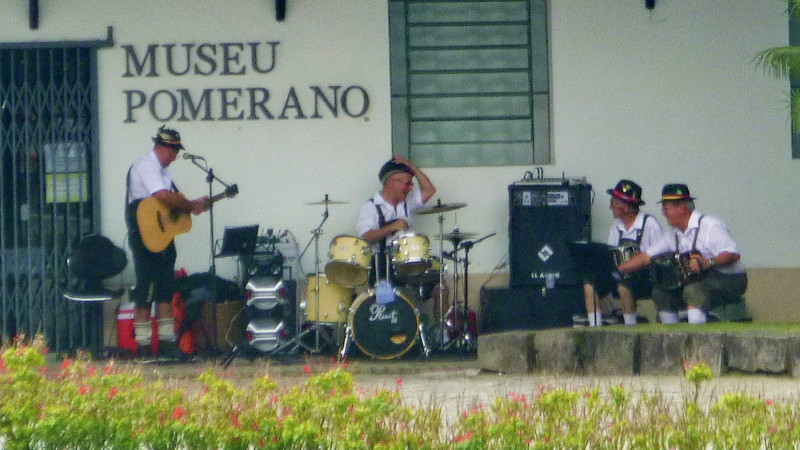 I’m still there four days later, having visited Pomerode and various excursions to the giant mall for working online. 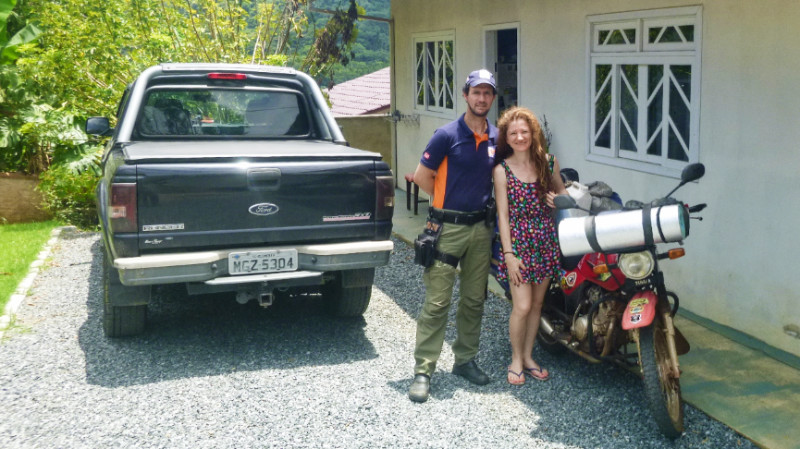 In the evening a tap on the door reveals Sonia offering me coffee and chocolate biscuits, we chat briefly before she retreats across the garden to her heme. Roberto is busy with Civil Defense. Recent storms have funnelled down the valley sides and flooded the river that runs through the city. Since storms appear nightly, he works all hours. Officially, Roberto and Sonia are on vacation but the reality is that they can’t go anywhere since Roberto is also on standby. All hands are needed in Blumenau during stormy weather.

Sonia told me about the building of the pousada and the trouble with local builders pushing up the price and their delays. It was a very stressful period and I glad they survived it. Their location is tucked behind a commercial zone but you wouldn’t know it when you’re there. Up the hill, it’s quiet and surrounded by trees. People are slowly clearing the woods to build houses so I hope that stops soon to retain the tranquil feeling of the area. 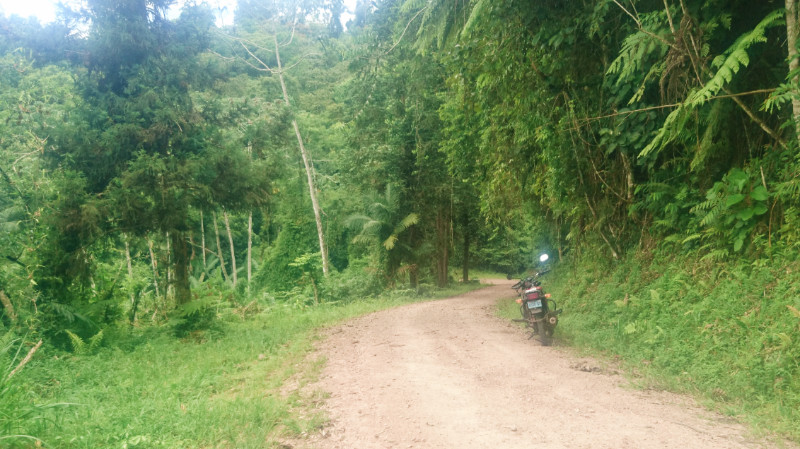 There’s always a temptation to stay one more night at places like this. My three day trip to Florianopolis is already well past a week and I force myself back on the road. Sonia packed me some chocolate biscuits I didn’t know that she made them herself and they had been a real treat in the evening with the coffee. She also gave me a bottle of fresh açai juice from the fruit in the garden. 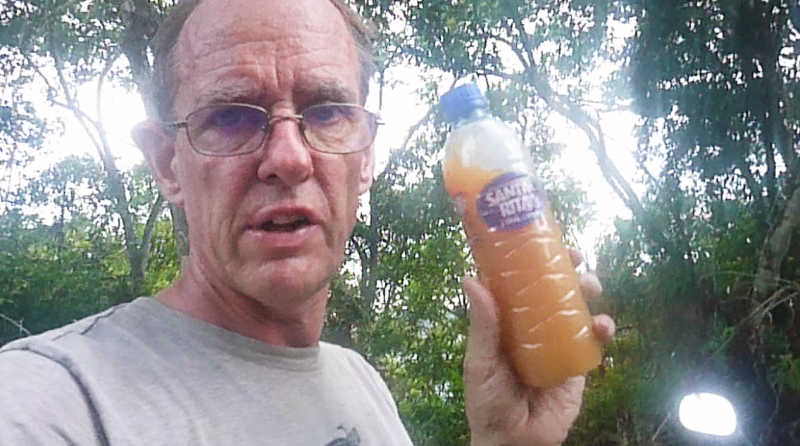 It’s not far from Blumenau to Itajai, 60km or an hour’s ride. Itajai is a major port north of Florianopolis. I resisted the urge to explore the city and take the bypass south to Balneário Camboriú. BR101 is a major artery down the coast. Fast and aggressive dual carriageway. Sure I could make Uruguay in short time but what would be the value in that?

January is holiday season in South America and I peel off down the ramp of the free-flowing artery of 101 into the clogged veins of Balneário’s streets. Bizarrely, the coast road is one way from south to north so I painfully creep down the gridlocked city centre, bike too fat with luggage to filter between the lanes, and turn left to the promenade and idle up the beach road, hugged by high rise buildings on the left and crowded golden beach on the right. 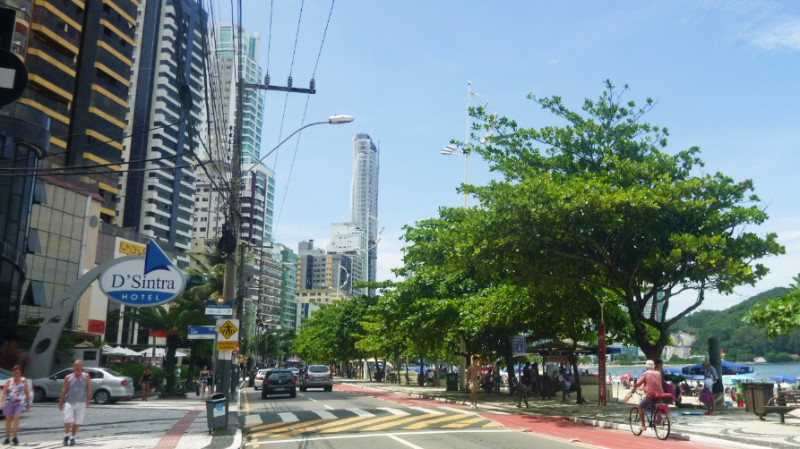 I felt like I was on holiday myself and stopped for an ice cream. Girls walked down the street wearing skimpy bikinis and thongs adding to the exotic ambience of the resort. Apart from the occasional signs in cafes requiring t-shirts, people carry on without being offended by semi-nakedness. It makes the UK look like it’s still in Victorian times. 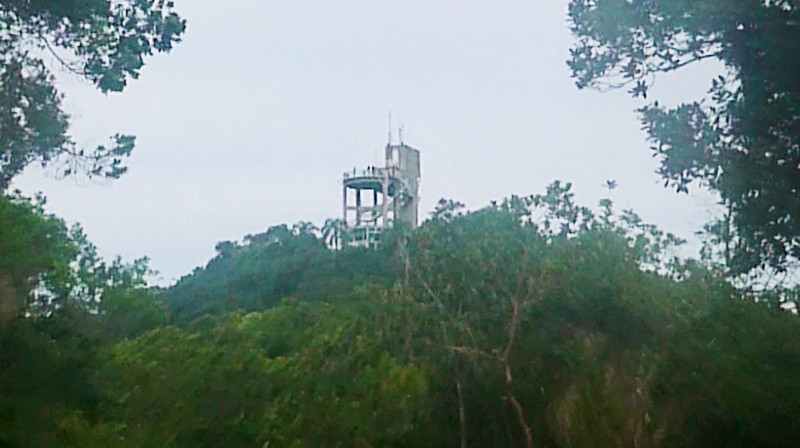 Finishing the ice cream, I decided I’d seen all I need of this pretty tourist trap, flick up the side stand and filter through the gridlocked streets southward. Sonia recommended the coast road of Avenida Interpraias and I weave my way to that, a scenic undulating coastal route linking idyllic Atlantic beaches. I didn’t stop except to check the map and plan where to stay for the night. There’s a Mirante not too far away at Itapema. Mirante do Encanto. I visualised it as a tranquil grassy mountain peak with perhaps a small monument. But no, I spotted its silhouette on the skyline from the BR101, a huge tower on a hill complete with a viewing platform. 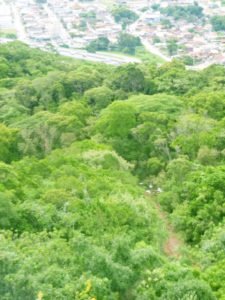 Up on the viewpoint is a picture postcard view of the bay to the south but I scanned the woods for camping opportunities and spotted some trash near a dirt track and traced a line made by a gap in the treetops to the likely entrance to the trail and returned down the stairs to the bike to go and investigate.

Along the trail are gates to private residences. I pass a house under construction plus the trash I saw from the Mirante to a forbidding looking slope of mud tracks. I slither down and power up the next rise to find a fairly secluded spot to pitch the tent. Any tyre tracks that were here had been washed away by rain so I shouldn’t expect any traffic tonight. 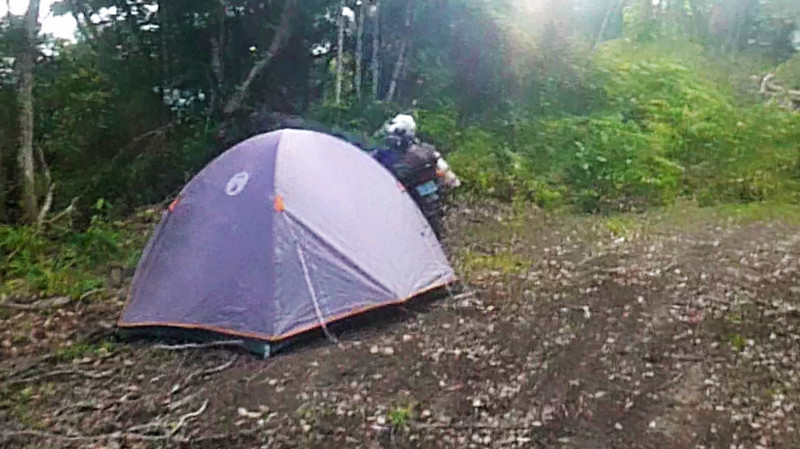 I had a peaceful night apart from the rain drumming on the tent and I thought about the return up the already slick slope I had slid down. The lane continued in the other direction to an excavation. I explored as far as I could but there was no way out and I returned to the slope riding up it as fast as I dared. I needed grip both for traction and for steering and I had little of either. I reached two metres from the top before I came to a halt and stalled the engine to stop it rolling back down. I dismounted pushing the bike with engine revving and rear wheel spinning carving a groove in the clay, but I made it to the top without having to unpack the bike. Even on the now level trail, it was difficult staying upright and I wobbled down the trail with my feet off the pegs to the junction with the asphalt continuing down the hill on the road from the Mirante. 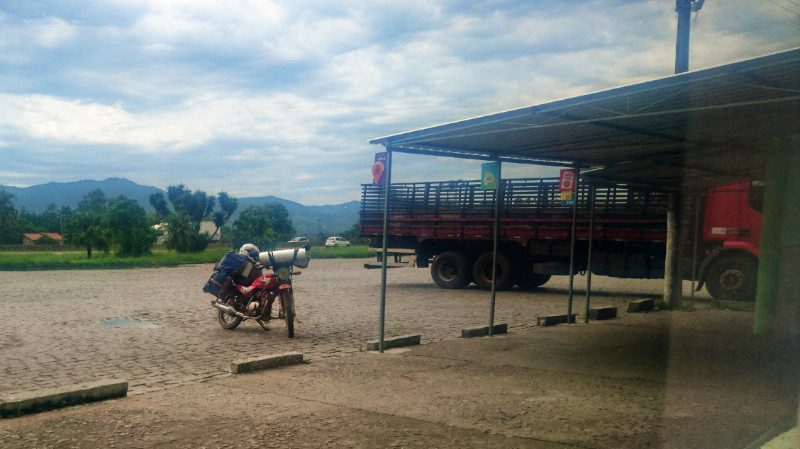 Stopping to check the map, cyclists stop to chat and take pictures of the bike and number plate and peddled away. The BR101 is close by and I join the everlasting stream of traffic south, pausing for brunch at one of the cheap and cheerful BR101 transport cafes along the way… 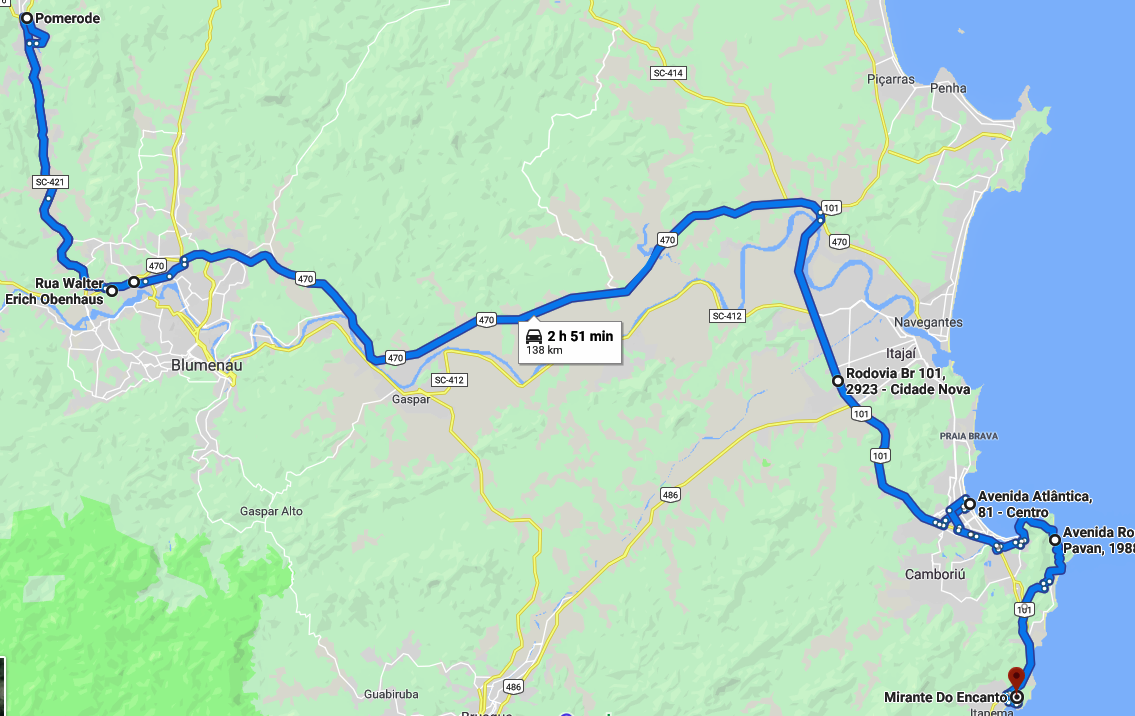