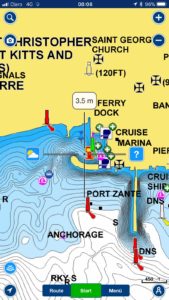 Pretty as a motion picture was the animated graphic forecast on Predict Wind’s Android app. The accuracy however, could not be guaranteed.

We motored all the way out to the Banc du Diamant with the wind dead astern, not worth deploying the spinnaker boom as it would be back in within an hour or two. As soon as we changed course to 340, the beam wind propelled us forward at 8 to 10 knots. Even with one reef in the sail, we were heeled over more than we were used to but the handling on the helm felt well balanced and not overpowered. Pretty soon we settled down to a steady 6 or 7 knots.

West of Dominica was a dead spot. Flat sea, no wind. Herbert was on watch and did his best to not use the motor but there is nothing much can be done with limp flapping sails. We crept out of the shadow of Dominica an hour into my watch just before 3am into a keen blow of 20 knots which put us on heel again and 4 hours of rapid progress.

6.30 we were in the lee of Guadeloupe. A dead zone for the rest of the day. The calm extended almost to Montserrat.

Getting to Nevis about 23.00, we approached the yellow buoy we were meant to pick up for customs. I didn’t like it so close to Charlestown and the ferry dock so I veered north to the mooring buoys designated for cleared vessels. Much quieter and serene.

Dawn broke on the 31st December to a mirror sea: silver under a grey drizzly sky. It looked more like Scotland than the caribbean. Ben Nevis and Loch Ness perhaps. We wanted to be away early before the customs boat had a chance to cruise around the mooring field but there was little movement apparent anywhere.

We kicked off our clothes and plunged into the warm,  clear water to shake off the fatigue and slumber before motoring to St Kitts in a soggy stone sky.

Our outboard was kaput. We were here on a lead from a friend of a friend. Names are changed to protect the innocent. 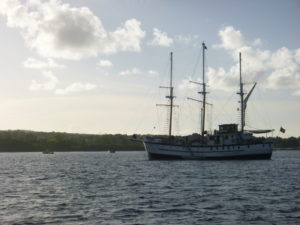 Following the yellow catamaran in that raced past us and rudely halted itself in front of the harbour entrance, we crept past and looked for Tim’s boat, Bounty. We couldn’t see it from the water so we moored at the fuel dock near the entrance and found him two or three boats away. Tim was our contact but he didn’t seem particularly pleased to see us.

“The dinghy and outboard are over there next to the customs office but you need to clear in before I can help you.”

Ah, that was a problem. My friend had told me there was no need to clear out of Martinique and waste two hours clearing in in St Kitts since we would load the dinghy and outboard at the fuel dock and be away.

Since we had not cleared out of Martinique, we could not clear in anywhere else. A shortcut that had become a road-block.

Our choices were either to risk it and risk detention or abandon the mission. The customs office is perched high on the quayside and has the view like a guard tower over a prison complex. We bought some time by refuelling Pantelisa and, for the sake of one piece of paper and the gaze of officialdom, we abandon the mission.

Technically, we are not legally allowed to go ashore anywhere without that piece of paper. This was a consideration for stopping anywhere but Martinique. We had time to get back and wanted to enjoy the journey back rather than hammer the overnight shifts. We’d be doing that to Colombia on the next leg anyway.

We told Tim we would leave it so we’d be off and handed him a four pack of beers. Tim had warmed to us by then and showed us on the chart some nice anchorages along St Kitts that might be good for New Year’s Eve.

Exiting the harbour, there was 15 knots of wind helping us down the coast. I liked the sound of Cockleshell Bay on the south coast with a Reggae Bar on the beach. We were not disappointed. The sun had broken through the cloud by then and we found ourselves anchoring in three meters of turquoise water with firm holding. With us as the only sailboat in the bay, it made for a picture perfect postcard scene.

Herbert took the snorkel a 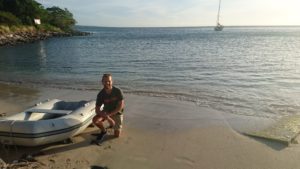 nd mask to inspect the anchor and the topology in case of any swing we might have. Level as a billiard table on the seabed except for scattered urchins instead of balls.

We deployed the dinghy and rowed into the beach locking the dinghy to a heavy ring set into a concrete block resting in the sand. The Reggae bar was how you would imagine a remote rustic Caribbean beach shack to be. 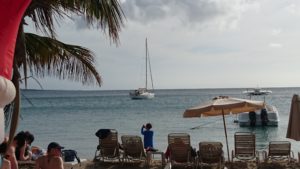 ugh the row of loungers and umbrellas to the bar looking out to Pantelisa was a dream scene hard to believe. We planned to be here long enough that we could get to Nevis after the customs and immigration closed at 3pm and nab a mooring buoy for the night. As it was so nice we stayed way beyond then.

This made up for the disappointing morning in Port Zante. Nevis was a short motor to the mooring field, weighing anchor into a b 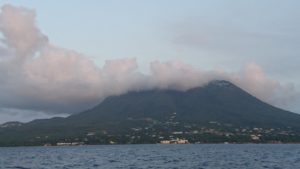 eautiful pink sunset with a three-masted tall ship on the horizon, we made the mooring ball just before dusk. This day had it all: rain, sun, uncertainty, beauty and adventure… and our minds turned to celebration…