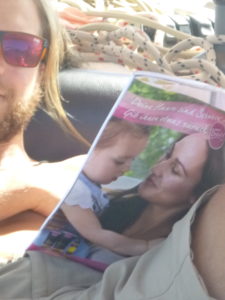 I was up at 7, irrationally keen to set off. We were 22 hours from Martinique so it wasn’t logical to go now and arrive at the Marina offices before they were open. 11am would be good enough. The morning was bright, warm and clear and already families were snorkelling off their boats through the bay and along the rocky shore. Guadeloupe is on the list for national roaming charges for my phone provider so I logged onto the internet and caught up on messages. The less I’m connected to the web, the fewer messages I get; the opposite of what I expected to happen. Herbert and I relaxed in the sun and swam around the boat in the warm turquoise water. After a longer than expected Skype call, we set off just after midday.

The sea was kinder to us today as we were broader on the wind steering a more southerly bearing. The warm land was drawing the air in from the west over the cooler sea. And we were unusually on a starboard tack going south until we reached the bottom of Guadeloupe and the wind flipped to push the sails across from the east. We had the usual calms in the lee of Dominica and Martinique and the leg was uneventful.

As usual, I could get no sense out of the La Marina du Marin office regarding marina instructions and I switched off the VHF and headed directly for the Carenantilles boatyard a mile to the north. The channel was clearly marked on the plotter but obscured in reality by scattered moored vessels and we weaved our way through the chaotic anchorage.

We had a name of a contact at the boatyard and we were met by a friendly French family together with Anna, the helpful boatyard manager. There turned out to be no mooring available. Not surprised, to be fair, the way of my previous experience of Martinique. We tagged onto the end of a pier that constituted half the boat launch.

Pantelisa was too fat to remain there when a catamaran came to be launched and we were pushed over to the gas station perched on the end of the other leg. There was no water or electricity but at least we had easy access to land and so stashed the dinghy away.

Two days later an irate French woman hammered on the cabin and told me I had been there two days, which I knew already since I had slept there two nights already. She ran the combined gas station laundry and bar. She bellowed that she had a business to run but what she really wanted was Pantelisa to be moved and eventually got round to mentioning it.

A Belgian catamaran arrived wanting to fill up and one of their acidic crew member’s said we could use the mooring around the corner. I went to confirm this with Anna first, to his displeasure, but couldn’t find her. It turned out he was lying. We backed off the dock looking for an alternative solution. Anna was on the shore waving and offered us either a space on the rafted pontoon floating out into the anchorage or at the end of the row of boats on the end of the established floating pontoon. We chose the latter although it wasn’t a real space as all the cleats were used up.

We reversed next to the end boat and secured the stern to the single available cleat shared with our neighbour and tied ourselves to the boat while we hailed a dinghy to take bow lines out to the buoy to our port and the cleat to our starboard on the pontoon parallel to us the metres to our starboard. The guy in the dinghy said that would be a problem if another boat came to moor in the space beside us but I said it wouldn’t since there were no more cleats available on that side and the parallel pontoon was fully occupied.

We borrowed a long hose for water and extension leads for the electric and we were as good as moored up for the last couple of days. It was easier to relax away from the gas station and dinghy dock.

Rolf arrived on the evening of the 6th before dark and we celebrated by going out to a meal at Mango Bay. Herbert brought up the subject of boat hitchers looking for passage to Colombia and the conversation turned to experiences with various nutters and delicate people that complained about breaking fingernails and getting wet. The consensus was that since we were already proven as an effective and harmonious crew, and we were already provisioned and set to go we would stay as a trio.

Half an hour later, Rosalie had tracked us down and joined us at the table. Herbert explained our conversation and Rosalie pleaded her case.

She’s quite the mediator, a smoother operator you will never see, Rosalie.

We felt awkward and didn’t want to feel bad and decided it would have to be a unanimous decision to accept. Even though there was no evidence of long fingernails and hairspray, It was me that said no, we should stay as a trio, to end the discomfort and the matter appeared closed as Rosalie left the restaurant carrying her disappointment with dignity.

The next morning, the subject cropped up again and Rolf felt like helping Rosalie out. Herbert was for it too so I went with the majority. I collected the boat papers and headed for the Captainarie at 10am for checking out, via Kokoarum to wait for Rosalie while Herbert messages. After an orange juice and an hour of interneting, hosting a mosquito feast around my ankles I messaged Herbert to say no sign of Rosalie and headed for the clearing out terminals at the Captainerie. Forty minutes later, I was back at Mango bay, papers and passports in hand ready to go but first, lunch.

Moments later, Herbert received a call from Rosalie and tells her we have already cleared out, it was too late. She said she would go to the Captainarie to get the paper and meet us at Mango Bay.

She must have sprinted all the way as she appeared at Mango Bay within half an hour with an exact copy of my paperwork with her details included in the crew list. We welcomed her to the crew and relaxed with a celebratory lunch before heading off.

Rolf volunteered to swim out to the buoy to retrieve the bowline and at 3pm we were heading out of the harbour bound for Cartegena, a rainbow astern signalling our departure as it did the morning of our arrival. I was 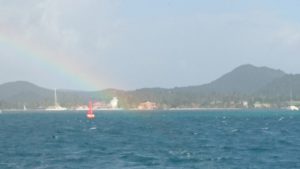 n’t unhappy about leaving Martinique. I had never felt particularly welcome here as it was so busy. I was grateful to Anna, the boatyard manager. She felt like she had been our only ally and we bought her a bottle of wine to express our thanks.

Mokta and his French family were very welcoming and helpful too. They were on a Dufour 560, a huge monohull, about 4 boats down. Socialising was limited for me since my French language and their English was limited. Herbert was our unofficial French diplomat…

Martinique faded into the distant haze before sunset and reappeared as anonymous lights on the horizon after dark. Other than that, this Caribbean crossing felt like a continuation of the Atlantic: same sail configuration, same wind direction. Rosalie had settled in well and proved a competent short-fingernailed crew member. Having one more German speaker tips the balance into German being the predominant language of conversation although English is used quite often to include me when I’m close by.

Ther is plenty of space on Pantelisa for 4. Technically space for 8 to 10. The main thing I notice is coming up to the cockpit, where there used to be space, there is a body, so lying down outside was a bit more restricted than before unless you were there first. It wasn’t a problem though as everybody shuffle’s up to make space without having to ask: almost psychic.

Rolf admitted he hates cooking so Herbert and I relieve him of that duty as we prepared dinner, following the retreating sun, Colombia bound…