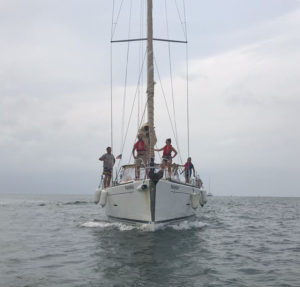 The leg to Colombia felt very much like a continuation of the Atlantic. We were 50 miles north of the Colombian shore to avoid the rising sea as the waves enter the shallows steeply near the coast.

Even so, to the south, we could see the white bloom in the night sky, reflections of the city lights of Santa Marta and Barranquilla. Tomorrow we would set foot in Colombia at Cartegena.

Moving the spinnaker boom to the port side to get a more southerly bearing to the wind revealed a break in the mounting on the mast and the boom had to be retired. Not a big problem as we had only one day of sailing left to go.

The hazy high rise skyline of Bocagrande condensed into view out of the distant mist. The coastal boundary of Cartegena. The entrance to the harbour was protected by a shallow rock barrier where in the past enemy ships might founder as they attempt an invasion of Cartegena. Rolf could not determine the depth or width of the channel that suggested an entrance and we decided on caution and headed south to round the southern point of Isla de Terra Bomba.

We hailed Eidleweiss on the VHF, Toni’s vessel, and received a broken response. 10 minutes later the transmission was much clearer. Instructions were to head toward the Bocagrande skyline and adjacent rock barrier.

Concerned that there might be a mistake, I asked if they could see us on the AIS. “I can see you in real life!” came the reply. The channel through the rock barrier was narrow but deep enough for cargo ships. This would save 4 hours or so.

Approaching the barrier we observe a dinghy well away from the shore waving a Swiss flag. It was Toni and Michael welcoming us to Colombia. This was why the transmission was so improved. The handheld radio had been less than a mile away from us.

The harbour was dominated by a statue in the bay surrounded by cardinal markers. It looked an odd place to have a statue until I learned that this area was a broad and shallow reef. 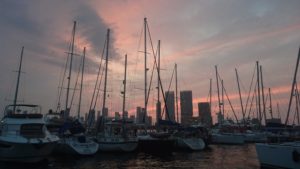 Soon we nosed our way into a narrow space between vessels on the end of a pontoon in the Club Nautico Marina.

Mission accomplished. Pantelisa had been delivered to Colombia.

Herbert left Pantelisa within a couple of hours as he was now reunited with Alexandra who was already based at a high rise AirBnB pad in Manga nearby.

Crossing an ocean for a loved one was something I’d only ever encountered in poetry and music. Herbert lived it. My reward? Homelessness came to mind. Pantelisa had been my home for the past three months and now my plans were lost in a fog of uncertainty. I was booked onto a Sacred Medicine retreat near Minca in a weeks time. All I had to do was to tread water until then. Michael and Toni allowed me to stay aboard and help with Pantelisa for the time being which was a relief. I heard that Toni needed some motorcycles moving from Santa Marta to Cartagena. A 200Km trip that sounded an interesting gig so I offered to help, even if it meant moving them one by one over the next week.

Toni had some business retrieving some lithium boat batteries that were being held to ransom by Colombian customs so a plan was set for four of us to drive to Santa Marta the next day and return via Barranquilla with four bikes. The fifth being left behind so that I could ride to the retreat in the mountains at the end of the week.

Meanwhile, Michael wanted to retrieve his Kawasaki Ninja today so I went with him in the Toyota Land Cruiser via the Tigo cellphone dealer so we could both get a data Sim for Colombia. In true manjana style it took over 2 hours to get the sim. Long enough for me to lose track of our parking token required for exit to the car park necessitating a €5 bribe to the security guard.

The Ninja was located at an apartment on the coast so Michael and I drove along the beach nearby to grab some lunch. The beach reminded me of a rustic version of Miami. Miles of straight sand lined with luxury apartments as far as the eye could see.

Michael walked into the building and emerged from the garage a few minutes later on the sports bike and turned toward central Cartegena with me tailing in the Land Cruiser. The traffic is a crazy competition to be the first to fill spaces in the traffic ahead. I couldn’t always stay right behind the Kawasaki but the distinctive black and yellow helmet was always in view.

Arriving in Manga, Michael stopped and pointed across the road and I noticed Rosalie looking bemused that Michael was on a motorcycle with me following in a Land Cruiser. Yesterday, we were simply boat crew. Rosalie hopped in and caught up on the afternoon’s events on the way back to Club Nautico.

I had no Colombian currency. I worked out it was roughly £3.00 for $10,000 (Colombian Pesos). The problem was solved by paying for dinner with Debit card and gathering in the cash contributions from around the table. I was already on the way to becoming a Peso Millionaire. 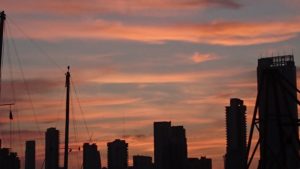