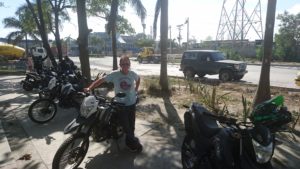 We were up before dawn the next day Santa Marta bound to collect the motorcycles. Rosalie cadged a lift too and we were huddled in the Land Cruiser bouncing along the rough concrete streets of Cartegena before the morning ‘workaday’ crowd barrelled onto the roads to race towards hated jobs.

I was warned that my backside would be sore from the motorcycle ride but it was already getting that way being perched in the centre of the rear seat of the land cruiser. 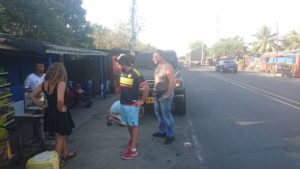 Along highway 90 are various stalls grouped into roadside villages and we stopped at one for some natural coconut refreshment.

We headed up in the foothills near Santa Marta to collect Daniel, the 5th member of the bike squad. He had a bike at his house but Michael took that and Dan joined us in the Land Cruiser.

Rosalie bailed out later near a random street in Santa Marta and we headed to the Marina.

The motorcycle key management system was of Latin style, you know, none. We spent some time trying random keys in random bikes. Toni said “I don’t know why you guys put tags on these keys. There was no response like he was speaking a language from another planet. Pretty soon we took off through the streets of Santa Marta, weaving in and out with Colombia’s best.

Rolf was following in the Land Cruiser squeezing through spaces like he was on a bike too, driving like a local. We had arranged to meet at the first fuel station out of town but Dan had passed us all and disappeared over the horizon. We stopped for lunch at a roadside cafe where Michael managed to reach Dan on the phone and told him to wait at the toll gate where he was and we continued our lunch.

We collected Dan at the toll gate and had to take him to the next fuel station. Dealing with locals here seems to be the equivalent of herding cats. I get the feeling almost nothing is thought through. Early days though, maybe it’s just a series of one-offs.

The road to Cartegena is smooth and flowing with long spaces between the traffic. There is a hard shoulder most of the way which makes a convenient undertaking lane if there is oncoming traffic visible along the long straights.

My bike was an ATK TT 180 enduro style. Dan was on an ATK TT 125 and seemed to have the legs of the 180. We were weaving in and out of the traffic toward Barranquilla to rescue the boat batteries from bureaucracy. The hot Colombian air was hardly cooled by the coastal breeze and the sweat could be felt sticking my t-shirt to my back under my backpack.

The motorcycles swarmed like bees through Barranquilla. We were Gladiators in the motordrome making our way to the customs office.

Dan and I waited in the shade of the trees while Toni, Michael and Rolf entered the dead air-conditioned atmosphere of the government office. Barranquilla is hot and dusty, the longer I sat, the dustier I became. After 90 minutes, Toni said we might as well head back and they would follow later. With that, we took off.

I asked Dan “You know the way back to the Marina in Cartegena right?”
“Si, no problemo!” and proceeded to weave through Barranquilla stopping every few hundred metres as Dan asked the way…

Out of Barranquilla on highway 90, you can’t go wrong. It’s the only highway between there and Cartegena so all we have to do is sit there and allow the road to roll away under us village after village.

The toll gates are free for motorcycles so we coast straight through a metre wide path along the side passing all the impatient car drivers that had raced past us miles back as they fumbled for change and waited to pay their toll.

The villages have speed humps too. Traffic builds in queues as the trucks slow to crawl over them. Dan and I filter down the inside or continue at speed and stand on the footpegs over the speed humps. The bikes rise gently under us as we roll steadily into the open space ahead.

We hit Cartegena at 5pm, rush hour, and the battle with the traffic is joined a few hundred metres at a time as Dan resumes his relay of direction finding. I learn to keep more distance between us as Dan can spontaneously come to a halt at unlikely looking junctions. Eventually, I take the lead as we come into sight of the dock cranes at Manga. I know the proximity of the Marina to the docks and we soon reach Club Nautico as we follow the coastal streets.

I’m parched and ready for a beer. Dan has no money (he says) and I buy him a couple of drinks as we wait for I’m not sure what. I presume Dan is staying the night on Pantelisa but I say nothing. I’ll leave that to the guys when they return from Barranquilla.

Hunger creeps up on me and I invite Dan for a Schwarma up the road. The food is cheap and good. Dan is a good guy and helps me carry beer from the supermarket back to the Marina for the guy’s return. Rounding the corner, we see the bikes are back, placing a hand on the engine reveals they are still warm so not long returned and we make our way to Toni’s catamaran. They are just finishing dinner so just in time for drinks and a fuzzy head for the morning.