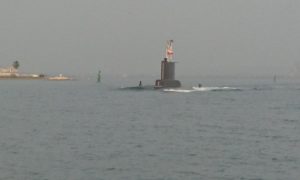 “Can you wear this uniform?” as Micheal hands me some surf shorts and a white t-shirt. I don’t mind. My laundry needs doing anyway.

We prepare Pantelisa for mystery clients. Not a mystery to Michael, a mystery to me until he shares more details as the day progresses. Three gay guys on a complimentary (exploratory) day out to discuss the possibilities and opportunities for chartering Pantelisa.

Frank is a warm and ebullient American from New York with a talent for marketing as I listened to the conversation throughout the day. Joshua appeared to be his partner: a Colombian with a good command of the English language. The second Colombian, I couldn’t catch his name, did not speak English and was left on the sidelines throughout the day. I sympathised since I was reminded of the occasions Herbert used to prefer to speak German on the crossing.

We slipped the lines and gently reversed out of the berth avoiding the web of lines holding the other vessels to their berths, and headed out of the harbour toward Isla Grande, turning south as we pass the two old forts that used to guard the harbour entrance. Michael gives an impressive history lesson on the forts as we bi-sect them. 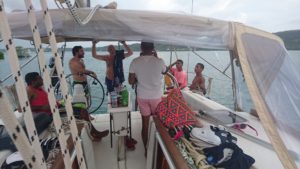 Isla Grande is quite a long way for a day out. It takes at least a couple of hours to get there. We would like to get the sails out but there is not a breath of wind as we motor down the coast. Our course looks like we might approach close to the treacherous reefs around the island and after some contemplation, we turn East to stay in deep water well away from the coast of Isla Grande.

We anchor south of the shallow channel between two islands and see quaint palm-thatched beach huts on the shore. The water is deep enough to go closer to them but my skipper is happy where we are and we settle down for a few beers and a swim in the warm Caribbean water. 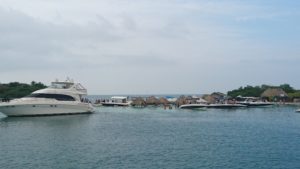 We don’t stay long as the day is short to fit so much in. Toni suggested a lagoon nearby that was deep enough fro Pantelisa’s generous draft of 2.2 metres. The plotter indicates a reef on the chart of at least three metres. Reefs are worrying, they are not often flat all the way along. I stand at the bow looking ahead into the green depths to get ahead of the game. The channel markers seem reliable and we read 3 to 4 metres plus all the way along as we enter the lagoon.

There#s a party beach at the entrance with booming music and moored motorboats. We are the only sailboat to drop anchor just inside the lagoon and a flotilla of locals swarm around us selling fish and whatever else as I seek refuge below and allow the clients to enjoy their negotiations. Me? Quero de nada!

We enjoy a lobster lunch and 80’s disco music before hauling anchor to Playa Blanco, a busy white sanded beach stretching for a mile or two up the coast. I’m not convinced by the holding of the anchor. The breeze is light but we are on a lee shore (blowing on) as is common in the daytime on a warm day when the thermals draw the sea air inland.

I dive on the anchor. There is plenty of chain but the anchor is resting on rock. Pantelisa is being held purely by the weight of the chain and anchor since there is nothing to dig in to. We aren’t moving and we aren’t staying long but I keep a weather-eye on our position.

Heading home, we deploy the Genoa to give the clients a sailing experience, even though there isn’t quite enough to stop the engine and let nature carry us. It was nice seeing a sail full of wind though. That was enough.

Rounding into the harbour, a vessel on AIS is barely visible on the surface. Anonymous in its detail on the plotter, we see the conning tower. It’s a Colombian Navy submarine. We wave to the three officers on the tower. As they pass to our port side.

It is dark by the time we reach Cartegena and we navigate all the way into the Old Town Quay. The icing on the cake for the clients. Michael asks me to contact Toni to invite him for food or drinks. Toni isn’t happy and asks if the US flag was still up. Yes, it was but I put it away as I hear that foreign vessels aren’t popular in the town, especially US flagged vessels.

The atmosphere aboard becomes muted but Michael and I stay for a glass of wine before returning to Club Nautico.